While Sidhu is being tipped to be the next chief minister, Captain Amarinder says he will not accept Sidhu as the chief minister as he will ruin the state. 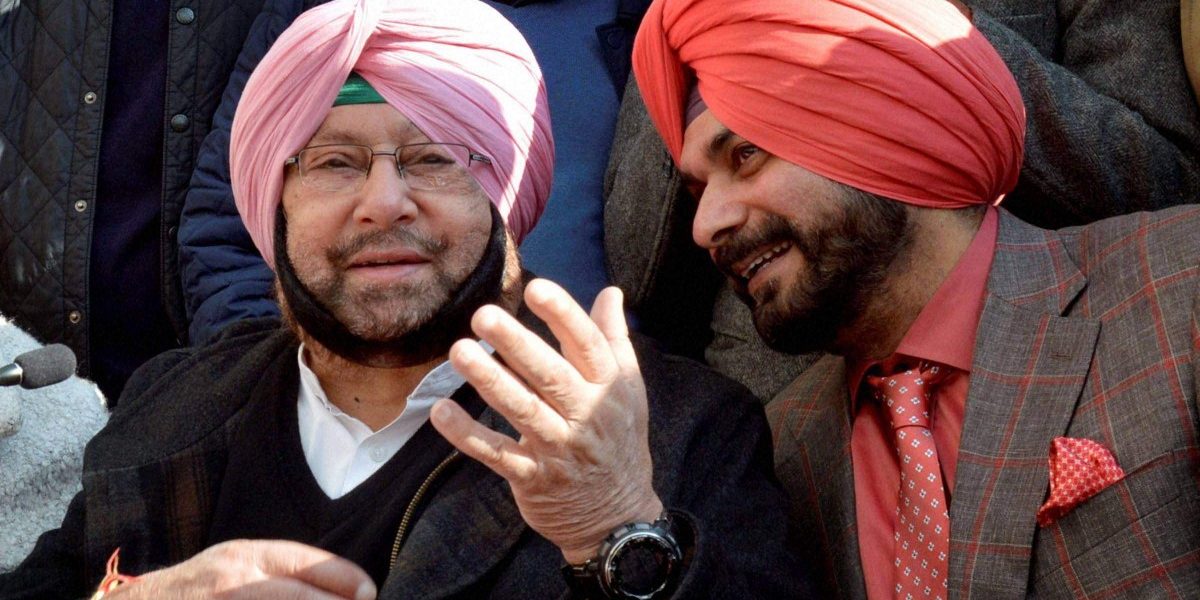 Chandigarh: In a major political development in Punjab months ahead of the assembly polls, Amarinder Singh stepped down as chief minister just before the Congress Legislative Party (CLP) meeting that later in evening passed a resolution, authorising Congress president Sonia Gandhi to decide on Amarinder’s replacement.

The party under his leadership came to power in the 2017 Punjab assembly polls with a nearly two-third majority. He has been in control of the government for the last 4.5 years, before cricketer-turned politician Navjot Singh Sidhu began a relentless campaign for Amarinder’s ouster that finally resulted in his unceremonious exit.

Just before he tendered his resignation to Punjab governor Banwarilal Purohit, Amarinder made a last-ditch effort by calling a meeting of party MLAs at his farmhouse outside Chandigarh. But not many MLAs turned up, giving a clear indication that he was no more in control within the party and the government.

Talking to the media outside the Punjab governor’s house in Chandigarh after his resignation, Amarinder said, “I felt humiliated by the party affairs in the last three-four months, taking a dig at me that I was not in position to run the government. Hence I have decided to step down. Now it is up to the party to choose anyone it likes.”

Even as he has told the media that he is very much part of the Congress party, there is still uncertainty about what he will do next. His statement to the media that “he will consult his supporters and decide his future course of action” is an indication that he may be planning something.

Sources said that it was the Gandhi siblings – Rahul and Priyanka – who took the call on his ouster after party MLAs from Punjab were continuously calling on them to change the leadership in Punjab over Amarinder’s alleged non-performance.

This was on the basis of the latest letter by 40 party MLAs  who wrote to Congress president Sonia Gandhi a few days ago, asking her to bring new leadership in Punjab ahead of the polls, that the party decided to hold a CLP meeting on Saturday.

Earlier in the day, Amarinder spoke to Sonia, who told him to step down. He reportedly expressed his displeasure at the decision but could not prevent it.

Sources said that after the CLP meeting ended at Punjab Congress Bhawan in Chandigarh, Rawat along with party observers held a separate meeting to decide on Captain’s replacement.

After Sonia officially announces the next CLP leader, the party will then approach the governor to appoint him the next chief minister.

Meanwhile, with Amarinder’s stepping down, his principal secretary Suresh Kumar, and political secretary Sandeep Sandhu too resigned from their posts.

The governor’s office too issued a media release, saying that Punjab governor Banwarilal Purohit accepted Captain Amarinder Singh’s resignation and that of his council of ministers.

“The governor asked him and his council of ministers to continue in office, for transaction of routine business, till alternative arrangements are made,” the release stated.

‘Non-performance among the reasons’

Political analysts as well as party insiders believed that Amarinder’s second stint as chief minister was a failure, thus turning other party members against him.

Earlier, he had no major challenger within the party. But after Sidhu’s emergence, he lost not only his old loyalists but also his grip over both the party and the government he was heading.

Political analyst Ashutosh Kumar said that a couple of reasons are responsible for Captain’s ouster. First is his non-performance, and second is the growing dissidence against him within the party because he relied more on the bureaucracy during his stint as chief minister rather than political leaders.

Third, his equation with the Gandhi family too has shaken, as he was not toeing the party line on major national issues. The latest issue was that of the renovation of Jallianwala Bagh. While Rahul Gandhi slammed the government on it, Amarinder’s casual remark that the renovation is fine indicated that he stopped taking the Gandhi family seriously.

The tiff in the Punjab Congress began earlier this year in April, when Sidhu began slamming Amarinder on his failure to take decisive steps on the sacrilege issue, war against drugs and several other issues of larger public interest. This led to an open request by the cricketer-turned-politician for an intervention by the Congress high command.

To end factionalism in the party’s Punjab unit, Sonia formed a committee comprising Rajya Sabha LoP Mallikarjun Kharge, ex-Delhi MP J.P. Agarwal and AICC general secretary in charge of Punjab Harish Rawat on May 28. Since then, the panel met multiple stakeholders including MLAs, ministers and the chief minister to ascertain their views ahead of the 2022 assembly elections.

Ignoring Amarinder’s protests, Sonia appointed Sidhu as the Punjab Congress president on July 18. Despite his appointment, the Congress failed to calm the waters, as Sidhu continued attacks against the Amarinder-led Congress government in the state.

Ahead of the CLP meeting, several names are floating for the chief ministerial post including Sidhu and former president of the Punjab Pradesh Congress Committee Sunil Jakhar

Before the CLP meeting, Jakhar released a tweet, congratulating Rahul Gandhi for his bold decision.

“Kudos to Sh @RahulGandhi for adopting the Alexandrian solution to this punjabi version of Gordian knot. Surprisingly, this bold leadership decision to resolve Punjab Congress imbroglio has not only enthralled congress workers but has sent shudders down the spines of Akalis,” he stated.

On the other hand,  Amarinder loyalists are asking him to take revenge.

Anarinder’s press secretary Vimal Sumley tweeted, “If people surprise you with betrayal, you have a right to shock them with due vengeance. Period.”

In a media interview Capt Amarinder Singh said, “I will not back down. The options are always open in politics, which is a fast-moving game”.

He added that charges of non-performance are “false and fabricated”, and that he has taken decisive steps and put several police officers in sacrilege. He said that under his government, major steps were taken to break the supply chain of the drug mafia.

“Those alleging me of non-performance had aspiration of becoming chief minister,” he said.

On Sidhu, he said, “this man has no capability.” “I will not agree with Navjot Singh Sidhu as chief minister. He could not run one ministry. If he is made chief minister, he will ruin Punjab.”

When asked if he did not have MLAs on his side, he said it was all rubbish, and he had full support of them throughout his tenure.

On the other hand, AAP’s co-in charge Punjab, Raghav Chadha, told the media that the governance in the state has been the biggest casualty in Congress’s ‘Game of Thrones’. “Congress today has become a sinking ship as the leaders are fighting for their own personal gains. It has left with no vision for the state. People of Punjab will teach them about the coming election.”

SAD’s senior leader Daljeet Singh Cheema said that now nothing can prevent the Congress from facing defeat in Punjab. “In the last four and a half years, the Congress government failed on all fronts under Captain Amarinder Singh. Now by replacing him, they again want to fool the people of Punjab.”

This story has been updated with the the CLP meeting authorising Sonia Gandhi to decide on the new chief minister of Punjab. This is a developing story. Updates will be added when received.