Joshi had been vocally supporting the farmers' protests and speaking out against the state BJP unit's alleged failure to address the issue.

Jalandhar: Following the expulsion of two-time MLA from Amritsar North constituency Anil Joshi from the party over his support to the farmers’ protest, the Bharatiya Janata Party’s Punjab unit is a divided house. Joshi, though, has emerged as a hero.

A section of party leaders and workers have termed Joshi’s expulsion as “unfortunate” and “demoralising”. While many came out openly in support of Joshi, others were speaking in hushed tones, fearing similar action from the party top brass.

Punjab BJP leaders from Ludhiana, Bathinda, Pathankot and Jalandhar districts not only expressed concern over the party’s prospects in the upcoming Punjab assembly elections in 2022 but also said that it is high time the Union government solve the farmers’ issue at the earliest. Farmers have been protesting against the three farm laws at Delhi’s Singhu and Tikri borders for seven months month.

Last week, the BJP top brass not only expelled Joshi but also issued a show-cause notice to BJP’s Ludhiana vice-president R.D. Sharma, who too sought an early solution to the farmers’ protest. Sharma was the deputy mayor of Ludhiana Municipal Corporation in the previous SAD-BJP government in the state.

Talking to The Wire, Joshi said that he never spoke against Prime Minister Narendra Modi or the BJP leadership. “All I wanted was to save Punjab and our party. It is sheer negligence on the part of [state] BJP president Ashwani Sharma that he failed to present the true picture of farmers before the party high command. Instead of providing a ground report, the BJP state leadership remained busy in presenting fake farmers by making them wear turbans just to please the party high command and prove that everybody was happy with farm laws,” he alleged.

Joshi emphasised that such a grand mass protest would have never taken place had the Punjab BJP leadership remained sincere in its approach. “Today, BJP leaders and workers are being thrashed and chased by angry farmers across Punjab and Haryana. Is it not the responsibility of the BJP Punjab president to save party workers? Basically, state leadership jhooth ka aura bana ke baithe hai (has created an aura of lies) that we are winning all 117 assembly seats in Punjab. But who does not know the ground reality?” he added.

Notably, Joshi was not only honoured by the Majha Kisan Sangharsh Committee, a farmers’ union, for his support to farmers but also paid obeisance in the Golden Temple on Tuesday. “I also spoke to senior farmers’ union leader Dr Darshan Pal and I am more than willing to visit the Singhu and Tikri borders. I am waiting for their call and would love to be there among the farmers,” he said. 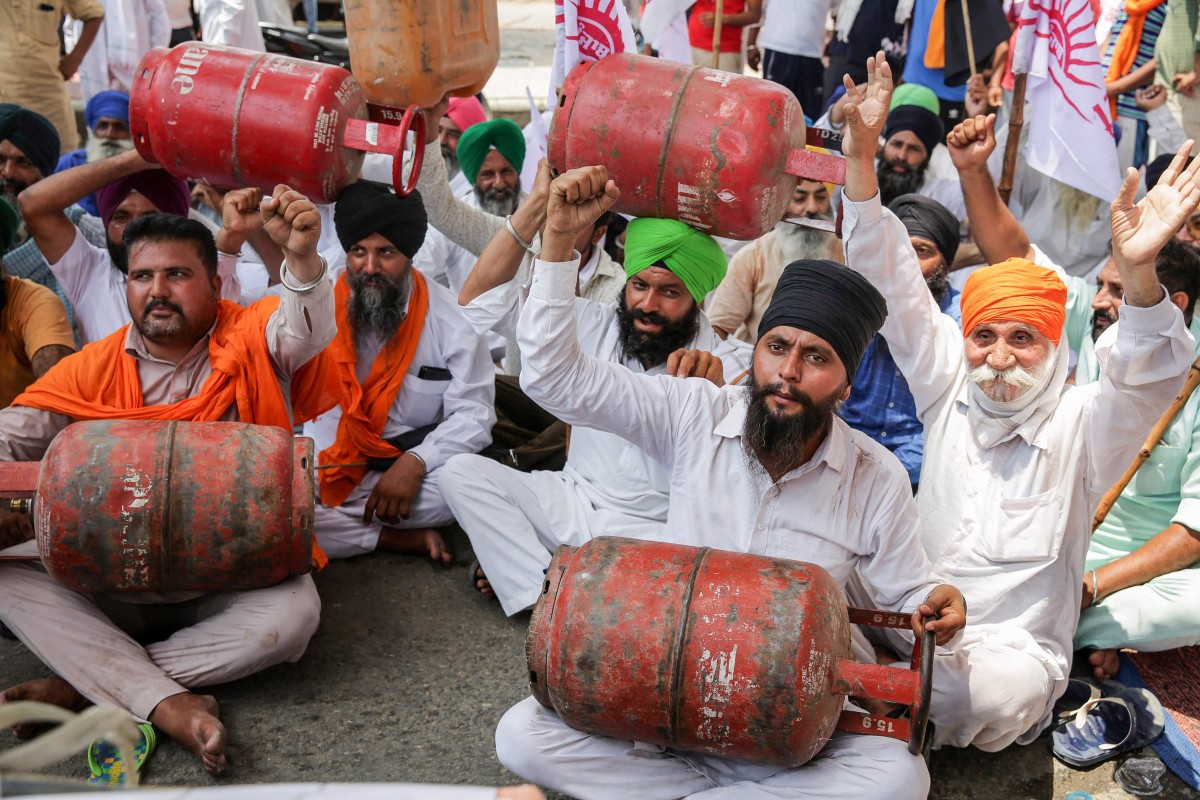 Farmers shout slogans against Prime Minister Narendra Modi during a protest against the hike in petrol, diesel and cooking gas prices, at the Golden Gate on the outskirts of Amritsar, Thursday, July 8, 2021. Photo: PTI

Though Joshi was tight-lipped about his future plans, rumours were rife that he might switch over to the Shiromani Akali Dal (SAD). Party sources claimed that Joshi was in touch with SAD president Sukhbir Singh Badal and that he would join the Akalis after some time.

Even R.D. Sharma said that days before Joshi’s expulsion, he along with Joshi had held three meetings in Ludhiana to address farmers’ protest issues and the response was good. He said, “We did not face any public backlash. Rather, everybody was of the view that the government should solve the farmers’ protest issues as soon as possible. But it is highly unfortunate that soon after the meeting, while Joshi was expelled from the party, I too was served a notice on similar grounds. It is because of some selfish party leaders that Joshi faced the axe. He just spoke about the benefits of Punjab and Punjabiyat. What wrong did he do? I think the party high command should reconsider his expulsion. It is a big loss.”

Other than Sharma, Kamal Chatly, who contested assembly elections from Ludhiana West seat in 2017, Surinder Shindi from Fatehgarh Churian, Raj Kumar Gupta from Sujanpur in Pathankot and a host of other party workers also spoke in favour of Joshi.

Two-time MLA from Jalandhar North seat K.D. Bhandari said that he was sad over Joshi’s expulsion from the party. “Joshi is a senior leader who gave 35 years to the party. He is like my brother. It is highly unfortunate that he has been expelled from the party, though his intention was to save the BJP from this chaos. Joshi just raised the voice of Punjab and spoke about the betterment of the state, party and farmers. It is my humble appeal to the central leadership to have a compassionate view and bring him back in the party,” he said.

When asked about his stand on the farmers’ protest, Bhandari said that Hindus and Sikhs in Punjab share a deep relation like that of ‘nails with skin’. “Farmers are like our brothers and we feel bad that they have been sitting on the borders under extreme conditions. We share family relations with farmers and strongly feel that the farmers’ protest should come to an end soon. While the government’s credibility is at stake, even farmers should be a little liberal in their approach. We all know how BJP leaders are facing public wrath in Punjab and Haryana, which has actually made things difficult for everybody,” he added.

Even former minister and senior BJP leader from Pathankot Master Mohan Lal, who was backing Joshi, said that he does not want to comment on the party high command’s decision but it is “unfortunate”. “The party high command should definitely reconsider it. I feel that it is because of the Congress that Anil Joshi was expelled from the party. Congress does not want the farmers’ protest to end, as it suits their agenda. Punjab is facing an acute law and order problem, and when Joshi raised his voice against this it led to his expulsion,” he said.

The former minister said that he too feels that the farmers’ protests should end now. However, he pointed out that even if the farmers want to repeal the laws, they should raise their voice in a democratic manner. “Farmers are turning undemocratic day by day. Long-term protests are a threat to society, the country and farmers too. See, the farm laws were brought through parliament and even the parliament cannot repeal it. Farmers should have accepted the 1.5-year suspension suggestion given by the central leadership, which would have sorted out the matter but they went ahead with their protest,” he added.

However, ex-cabinet minister and senior BJP leader Manoranjan Kalia said that Joshi should have refrained from speaking publicly on farmers’ issues. “The party has not taken the decision in haste. Since he crossed limits, he faced action. Joshi’s claim that nobody presented the facts before the central leadership is a farce. A delegation of BJP Punjab leaders including me had met the senior party leaders over farmers’ demands in October 2020. Whether the party leaders should have acted on it or not was purely their call. But I am sure that some amicable solution in the farmers’ protest will take place in next six months,” he said. 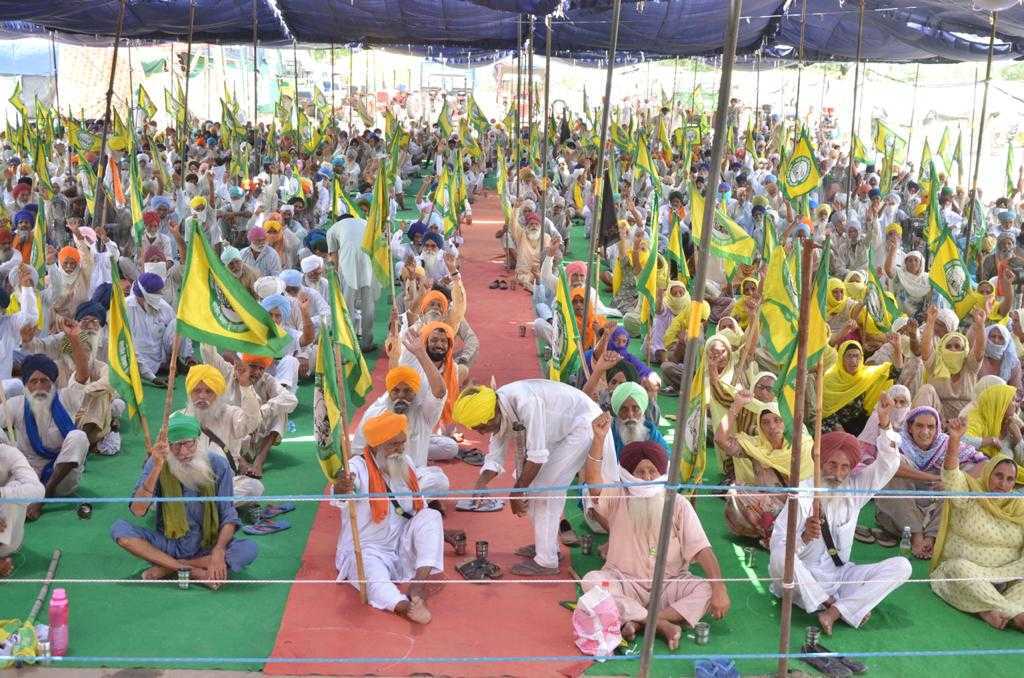 Bathinda-based state BJP executive member Mohit Gupta, who is also the former state president of the Bhartiya Janta Yuva Morcha, supported Joshi and shared his views through a press note on Facebook. “Party leadership has taken the decision in haste and it is wrong. They should reconsider it. We had appealed BJP Punjab president Ashwani Sharma that let us take party leaders from 23 constituencies to the senior leadership in Delhi and give them the ground report. Instead of addressing our demand, they expelled Joshi from the party. Today our party workers are in fear and feeling demoralised. All political parties including SAD, Congress and AAP were in the field ahead of assembly elections while BJP’s political activities have come to a standstill. Joshi spoke about Punjab, farmers, traders and businessmen. He raised voice of Punjabis and there was nothing wrong in it. Our relation with farmers is at stake. We need to win back the trust of the farmers and for that farmers’ protest should be sorted out first,” he said.

Gupta said that that he was getting around 70-80 calls from party workers every day saying that the farmers’ protest should be resolved. “Table talks are the only solution and if the government can bring amendments in the GST, then why not solve the farmers’ protest too? In fact, whosoever loves Punjab and Punjabiyat would want that farmers’ demands to be addressed. Only those who are against Punjab would not want this to happen,” he said.

Contrary to party leaders speaking in favour of Joshi, BJP Punjab president Ashwani Sharma said, “Anil ko Anil Joshi kisne banaya? (Who made him Anil Joshi from Anil?) It takes years for the party to make a leader but if one crosses the limit of indiscipline, they are bound to face the music. It is not our fault. He indulged in indiscipline. Moreover, I don’t have any personal issues with Anil Joshi, it was party high command’s decision.”

Sharma also rebuffed reports that many party workers and leaders have come out in support of Joshi. “A handful of people were speaking in favour of Joshi and they will not make any difference. On the farmers’ protest, all I can say is that the matter will be solved on the table through talks only,” he maintained.