Scores of farmers surrounded a BJP worker's house for nearly 12 hours where several party leaders were holding a meeting in Patiala's Rajpura on Sunday. 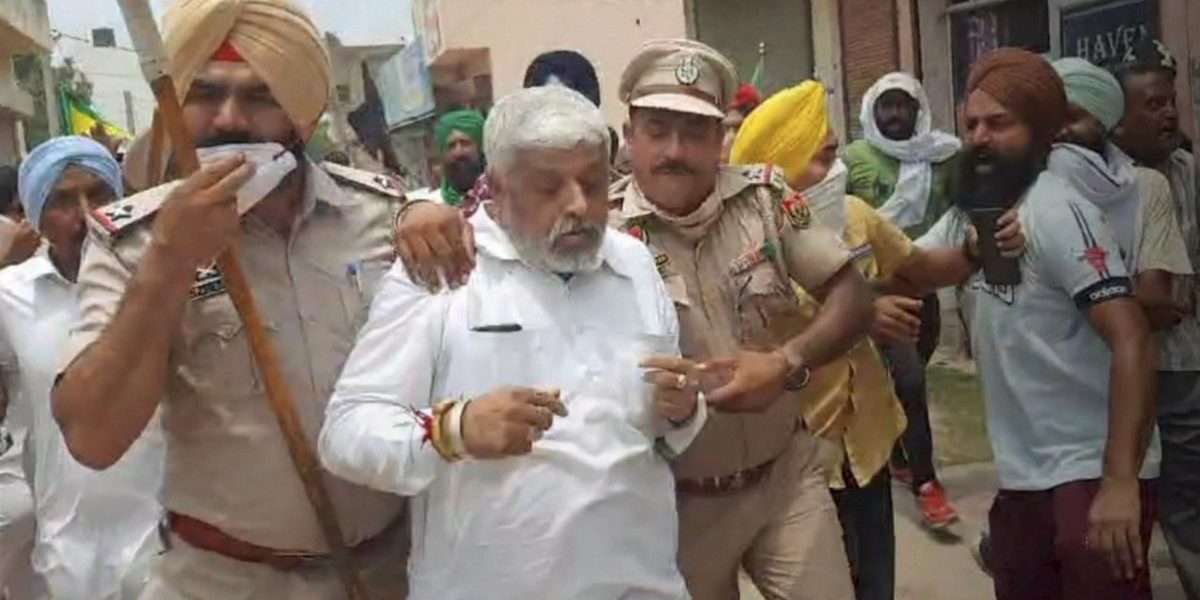 Police personnel protect a BJP leader from the farmers attacking him during their protest aganist three farm laws, at Rajpura in Patiala, Sunday, July 11, 2021. Photo: PTI.

New Delhi: Around a dozen BJP leaders confined to a house in Patiala’s Rajpura for nearly 12 hours allegedly by protesting farmers were rescued early Monday following a late-night Punjab and Haryana high court order to the state police.

The BJP leaders petitioned the Punjab and Haryana high court through their lawyers, saying they were illegally detained by a mob at a house in Rajpura.

Advocate Jagjot Singh Laali, one of the lawyers, said a habeas corpus petition was filed around 11 pm Sunday and a hearing through video conferencing took place around 11:30 pm.

A habeas corpus petition is filed for producing before a court a person who is under arrest or in unlawful detention.

The court of Justice Suvir Sehgal Sunday night directed the Punjab Police to ensure the petitioners are provided a safe exit with adequate security and that no harm is caused to them.

The court had also asked for a report to be submitted before it by Monday 2 pm.

During the hearing on Monday, the court was informed that two FIRs have been registered in the case – one with regard to the alleged confinement of petitioners in a house in Guru Arjun Dev colony, and the other over the alleged manhandling of some BJP leaders near a grain market in Rajpura.

Patiala deputy superintendent of police (Rajpura Rural) Jaswinder Singh said the BJP leaders were taken out of the house around 4 am Monday. Police used mild cane-charge to disperse the protesters.

The court was also informed that the petitioners were taken out of the house safely.

Meanwhile, the senior Punjab BJP leadership staged a protest against chief minister Amarinder Singh in Chandigarh over the incident. Party workers also held protests at other places of the state including Ludhiana, Fazilka, Mansa, Amritsar and Gurdaspur.

It all started Sunday when the protesting farmers allegedly disrupted a district-level BJP meeting at Rajpura on Sunday following which the party leaders and workers had gathered at the residence of a party worker.

Also, when local leader Shanti Sapra was being escorted out, protesters carrying black flags chased him down the street and allegedly manhandled him.

A large number of farmers then reached the house and laid siege.

Punjab BJP general secretary Subhash Sharma, who was present among others in the house, said the protesters had even disconnected the power supply which also led to a water shortage.

Sharma alleged the protesters damaged the vehicles of some BJP leaders, besides the windscreen of a police van.

He also alleged the protesters hurled bricks at them when they were being taken out of the house by the police. Sharma said they would be lodging an FIR in this matter.

On their part, the farmers alleged the BJP workers used inappropriate language against the protesters and a security man of BJP leader Bhupesh Aggarwal allegedly brandished a pistol at them. They were demanding an apology from the BJP for the same.

Meanwhile, the Punjab unit of BJP is in the middle of an internal conflict. Already facing the ire of farmers, the party expelled its senior leader Anil Joshi for siding with farmers who demanded the revocation of farm laws.

A two-time legislator from Amritsar North, Joshi has been openly blaming the party’s state leadership for not giving correct feedback to the Union government on the farm laws.

Joshi, as per the orders of state unit chief Ashwani Sharma, did not give up his stubborn attitude of going against the party on farmers’ issue and hence was expelled.

In his tweet on Sunday, Joshi stated that he will now freely talk about the farmers’ movement.

In his media statements, Joshi questioned the party’s decision and asked whether it was a sin to speak for farmers.