A number of Congress-DMK MLAs in the UT had tendered their resignations recently. 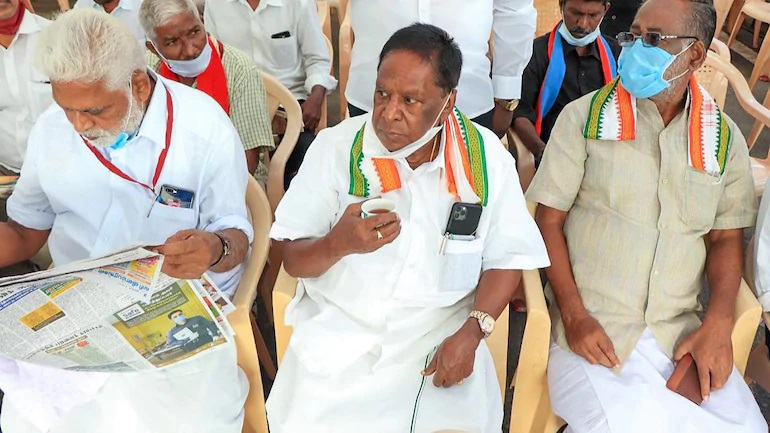 New Delhi: The Congress-led government in Puducherry on Monday lost the confidence vote sought by chief minister V. Narayanasamy, in the face of its depleted strength of 11 against the opposition’s 14 following resignation of ruling dispensation MLAs, including a DMK legislator.

Though Narayanasamy moved the motion seeking the confidence vote minutes after the assembly met for a special one-day session, he and his ruling side MLAs later walked out before the motion was put for voting.

Subsequently, Speaker V.P. Sivakolundhu declared that the motion stood defeated. Meanwhile, Narayanasamy went to the Raj Nivas, met Lt Governor Tamilisai Soundararajan and tendered his resignation as chief minister. “Myself, ministers, Congress and DMK MLAs and an independent legislator have tendered our resignations and sought it be accepted,” he told reporters after meeting Soundararajan.

Soundararajan, who was handed over an additional charge of Puducherry, had on Thursday directed Narayanasamy to prove majority by ordering a floor test on February 22.

The Narayanasamy government had been dealt a further blow on Sunday after two additional MLAs from the Congress-DMK alliance – Congress MLA K. Lakshminarayanan and DMK legislator Venkatesan – too tendered their resignations. Four Congress MLAs, including ex-ministers A. Namassivayam (now in BJP) and Malladi Krishna Rao, had already quit, while another party legislator was earlier disqualified.