Protests Carry Echoes from the Past, 85 Years after Kashmir’s Great Rebellion

Politics and geopolitics, popular hyperbole and official repression, and above all, the denial of rights are some of the drivers that the 2016 unrest shares with 1931. The difference today is that the movement is leaderless. 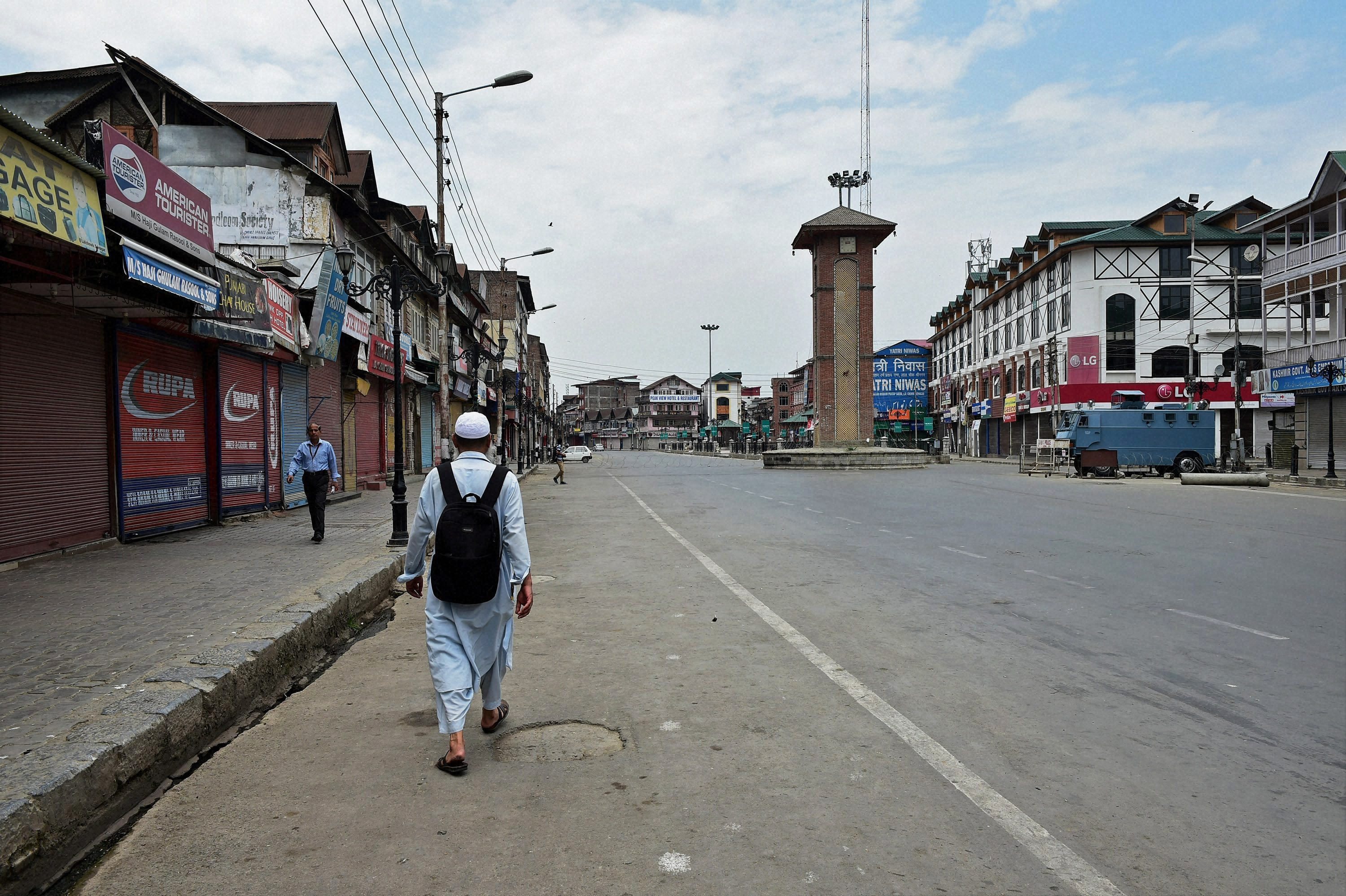 Deserted view of Lal Chowk during restrictions and strike on the fourth consecutive day in Srinagar on Tuesday. Authorities imposed restrictions in most parts of Valley following the killing of Hizbul Mujahideen commander, Burhan Muzaffar Wani, along with his two associates. Credit: PTI Photo by S Irfan Deserted view of Lal Chowk during restrictions and strike on the fourth consecutive day in Srinagar on Tuesday. Authorities imposed restrictions in most parts of Valley following the killing of Hizbul Mujahideen commander, Burhan Muzaffar Wani, along with his two associates. Credit: PTI Photo by S Irfan

July 13 is the most important anniversary in Kashmir’s calendar. It marks the day in 1931 when 23 Kashmiris were killed in police firing, and an unprecedented mass rebellion began. That agitation shook the Dogra kingdom, swept the young Sheikh Abdullah to iconic mass leadership, and marked the beginning of mass politics in Kashmir. It is commemorated as `martyrs’ day’ in Kashmir.

It is worth recalling what happened that day, for there are several echoes of it in today’s events. The police fired in 1931 at Srinagar’s Central Jail, when the gate of the jail compound collapsed as a large crowd jostled and pushed. Their hero, Abdul Qadeer Khan, was being tried in the jail premises – since large demonstrations at the courts had disrupted his trial there over the past several days.

Just as the official apparatus did not expect the outpouring of emotion and rage following Burhan Wani’s killing last week, the government of that time did not expect Qadeer’s trial to cause such explosive demonstrations. He was being tried for sedition after he gave a speech outside Srinagar’s Khankah on the oppressiveness of non-Muslim rule for the state’s Muslims. He had been unknown until then. That single unheralded speech on the street turned him into the ‘poster boy’ of that age.

At this distance, it seems apparent that economic frustrations and the perception of discrimination against Muslims were at play. Among the factors at play were the patterns of ownership of land and of shawl looms, working conditions at Srinagar’s silk factory, and the demand for government jobs among the first generation of educated Kashmiri Muslims. Sheikh Abdullah and the dozen or so who had returned with degrees from Aligarh Muslim University and from Lahore the previous autumn had swelled the ranks of educated Muslims.

At this point, social factors are more immediately obvious in Kashmir than economic ones. These include an inter-generational communication gap, particularly in the context of emergent unitary families and rapid urbanisation, aggressive self-assertion among teenagers and children, and the breakdown of traditional respect for elders.

As in today’s Kashmir, there was a great deal of churning in 1931 over how to understand and practice Islam. Traditional ziarat-oriented praxis was under pressure from Deobandi orthodoxy and the Anjuman-e-Ahle Hadith, which had been established in 1925. In the current phase, Salafi and Tablighi movements have gained great strength in Kashmir over the past decade – again at the cost of ziarat-based traditions.

Overt and violent antagonism between the Jammu and the Kashmir areas too can be dated from 1931, when Kashmiris revolted en masse against Dogra rule for the first time. After remaining dormant for several decades since 1953, Jammu versus Kashmir antagonism has surged since 2008. Agitations in both provinces over land transfer to the Sri Amarnath Shrine Board brought it to the surface that year. It was manifest in tensions within the PDP-BJP coalition in the state last year.

Islam-based groups in places like Lahore such as the Ahrar party and the Ahmadiya movement fomented the 1931 rebellion. This time, the Dawat-ul Irshad seminary, from which the Lashkar-e-Taiba comes, is among the institutions and groups that have influenced events in Kashmir.

The 1931 rebellion is similar to the current scenario in Kashmir in another respect. Both rebellions brought a new generation of youth to centre-stage. At the age of 25, Sheikh Abdullah became the totemic symbol of Kashmiri aspirations in 1931. Maulana Masoodi and , who also emerged in public life during that agitation, were equally young. Today, leaders such as Syed Ali Shah Geelani and Mirwaiz Omar acknowledge that teenagers have relatively little regard for them.

Politics and geopolitics were in play then, as now. The British Empire leaned heavily on Maharaja Hari Singh and only restrained the Lahore-based groups when the Maharaja agreed to appoint a commission headed by Justice JB Glancy to investigate people’s complaints. Rudimentary democratic structures came into being after 1934.

The leverage it gained in 1931 got the British the Gilgit Lease in 1935; its focus was on a potential Russian advance. Gilgit is in sharp focus today owing to the China-Pakistan Economic Corridor.

Highly emotional and hyperbolic reactions by the public in Kashmir were evident in 1931, as they have been during the funerals of militants over the past year. A vast throng gathered in Srinagar from the surrounding villages in the third week of August, when word spread that the then mirwaiz, Yousuf Shah, had called for jihad.

Although it was far more repressive than the current regime, the Dogra administration was forced to back down from the curfew it had imposed on at least one occasion. The alternative would have been to risk hundreds of deaths in police firing. Those who criticise chief minister Mehbooba Mufti for urging the security forces to show restraint would do well to take a lesson from history.

Democratic rights, economic (mainly land) reforms, and social equity did much to ease Kashmir’s angst over the next few decades after 1931. The denial of democratic rights through such measures as rigging, police repression and lack of justice in the face of security force excesses are among some of the causes of the current anger. Perhaps we should all learn from Kashmir’s history and urge the country’s policymakers to plan and act wisely.