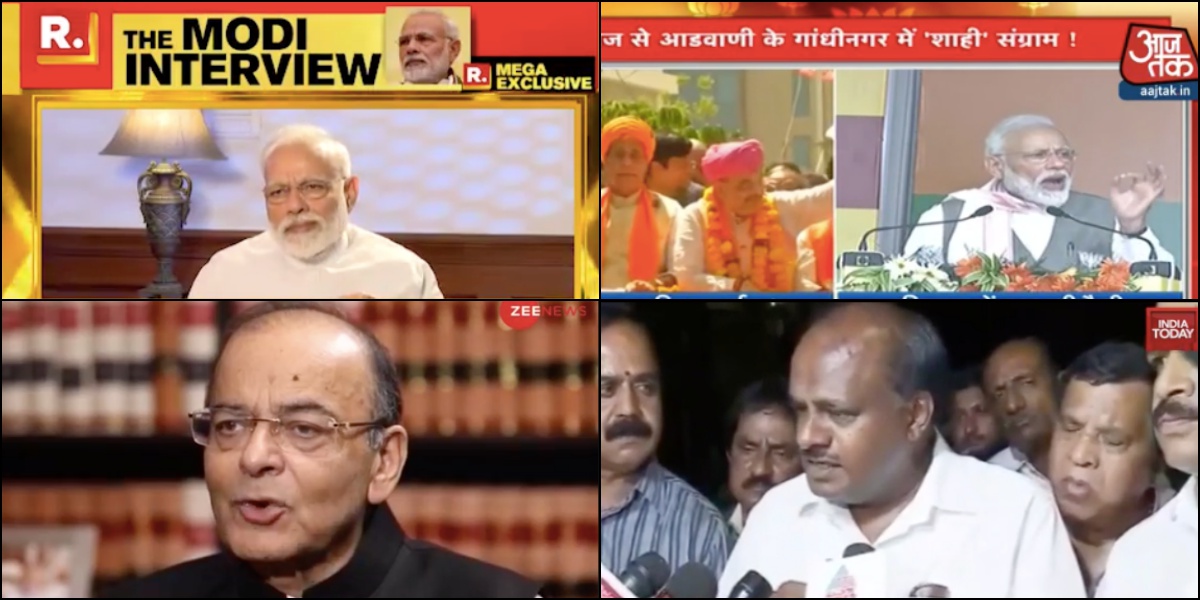 New Delhi: The Income Tax raids in Karnataka have brought the Janata Dal (Secular)-Congress government in the state in direct confrontation with the BJP-ruled Centre. Both the parties have complained to the Election Commission about the raids being politically motivated. BJP leader Arun Jaitley has hit back saying they are making “corruption a cause”.

How did the media cover these and other stories?

The channel, under the headline “Karnataka: Raid politics”, said chief minister H.D. Kumaraswamy has urged the Election Commission to intervene. He accused the IT department of “harassing” Congress-JD(S) workers and termed this a “shameful attempt” to generate fear in them.

“Kumaraswamy issues a series of tweets,” read another headline.

The state Congress chief Dinesh Gundu Rao, it said, has also written to President Ramnath Kovind, the Election Commission and the Central Board of Direct Taxes to stop the raids.

On the other hand, the channel said Union finance minister Arun Jaitley slammed the JD(S)-Congress for making “corruption a cause”. “If no politician has been searched, no minister has been searched, then why the protest?” he asked.  A headline summarised this saying “Jaitley: CM backing corrupt.”

The channel stated: “The question is how will this impact the mind of the voters”?

“Congress neta stirs row” and “Cong bats for dynasty” were its headlines.

The channel also showed Delhi BJP president Manoj Tiwari asking: “Who gave them the tag of first family, this is ‘samant-wad soch’ (dynastic thinking), the public will given them the answer”.

In its programme on “Contenders of Andhra Pradesh”, the channel looked at the “Chandrababu Naidu versus Jaganmohan” contest describing it as a “CEO CM vs political scion” fight.

It had anchor Srinivas Jain travelling to Vijayawada for a huge rally by Jaganmohan Reddy. Reddy insisted: “In Andhra, people have become fed-up with Naidu” and exuded confidence that he would become the next CM.

The channel said there were 37 cases against Reddy and he had assets over Rs 500 crores. Reddy explained: “What we have declared is already there, accounted for. I was an industrialist – we had a 40MW hydropower project.”

On the other side, Naidu’s campaign has had a more national tone. Leaders of other parties like Arvind Kejriwal of the Aam Aadmi Party and Farooq Abdullah of the National Conference have attended his rallies.

To a question on whether he felt the ground slipping from under his feet in the state while he was focussing on national politics, Naidu said: “This thought is a Modi-Shah creation: these are mind games. There is no support for Jagan, he is just a front for Modi and KCR” (Telangana Rashtra Samithi leader).”

The channel showed another part of “The Modi Interview” with editor Arnab Goswami.

Modi explained why he did not speak about the Pulwama attack the same day while addressing a rally over the phone. “In my Patna rally in 2014, there were bomb blasts, but I stayed silent and urged people to disperse peacefully. So balanced behaviour is required. If someone makes this a political issue, it is their choice.”

He said he promised a “muh tod jawab” within 24 hours of the attack but left it to the agencies to decide the details. “There is expertise for this, information is gathered, several agencies work – as PM the message was to go out enough is enough, so I gave a free hand to the concerned to draw up plans.”

However, he said, he followed the Balakot airstrikes closely. “I was completely involved, as I should be.”

On why the opposition alleged a conspiracy in Pulwama and match-fixing between him and Imran Khan after Balakot, Modi said: “This question can be answered by those who are used to making personal attacks.”

To the opposition alleging that he used the ASAT launch and Balakot for political gain, Modi said: “This is an imaginary approach of our opposition. I am open for debate on gas connections, bank accounts, employment – but they move to different issues.”

The channel discussed politics and corruption during prime time. It also had a headline asking “Why it took five years to create Lokpal”.

Anchor Navika Kumar asked “Where are the convictions in 2G, Coalgate, Vadra case”?

Political commentator Anand Ranganath said: While “prima facie there has been no big ticket conviction in Modi rule, but who amended the FCRA?Who changed the lookout notice of Mallya from ‘detain’ to ‘inform’?”

He charged that big corruption was staring at all as there were Rs 9.4 crore lakh worth of NPAs on bank books.

Ghanshyam Tiwari of the Samajwadi Party said: “Juicy points are not shaping the election – distress and disharmony are. Also, there is widespread unemployment and agrarian crisis.”

In #JaitleyOnZee, channel editor-anchor Sudhir Chaudhary interviewed Jaitley. He asked him if he was happy with the way big loan defaulters like Nirav Modi, Mehul Choksi and Vijay Mallya were dealt with. Jaitley replied that “in the past, people would leave and never return. We have shown that if you would default or betray the national we will catch you wherever you are.”

On BJP’s promises of abrogating special status for Jammu and Kashmir via Article 370, implementing the Uniform Civil Code and constructing Ram Mandir, Jaitly said “these are our core beliefs.”

He said “Ayodhya is in court and we will try that the temple is built. We still believe that the core structure of Kashmir created by Panditji (Jawaharlal Nehru) was wrong. Hundreds of people, who were opposed to the idea of India, were getting security and we have withdrawn it. Organisations like Jamaat-e-Islami and Jammu and Kashmir Liberation Front which spewed venom against India have been banned.”

“We used NIA and Income Tax authorities to stop unauthorised funding for terror. Today there is no stone pelting and people are not on the streets. Ordinary Kashmiris want peace,” he said.

The channel had a detailed story on Amit Shah filing his nomination from Gandhinagar after a four km road show. In attendance were senior NDA leaders including home minister Rajnath Singh and Uddhav Thackeray of Shiv Sena.

Shah’s nomination, the channel said, marked the end of an era as veteran L.K. Advani has not been given the ticket this time. Its heading, “Gandhinagar say Modi kay chanakya ki chunavi pariksha”, summed up the importance of the occasion.

The channel also showed Shah saying that Gandhinagar was the “karambhoomi of BJP stalwarts”.

In “Kashi ka chakravyuh” (The intricacies of Varanasi), the channel spoke about how the opposition was lining up against Modi in his constituency.

It showed Congress leader Priyanka Gandhi saying that not one of the eight promises made by the BJP for Varanasi in 2014 had been fulfilled.

The channel said that while Priyanka has indicated she may contest the seat, the Congress could decide upon supporting Bhim Army leader Chandrashekhar Azad, whom she met earlier this month. Azad later did a road show and spoke about fighting from Varanasi. However, the channel said “70% people supported Priyanka” contesting the seat.

The channel quoted former AAP leader Ashutosh saying that when Kejriwal contested in 2014, he “Got just 15 days to campaign but still managed over two lakh votes and came second.”

With Modi’s margin of victory then being 3.77 lakh and Congress-BSP-SP together getting 3.90 votes, he said, a combined assault “Can give Modi some anxious nights”.