Presidential Poll: As BJP Enjoys an Upper Hand, Opposition in Search of a Strong Candidate

New Delhi: With the schedule for presidential polls out, hectic political activity has begun in both the ruling Bharatiya Janata Party (BJP)-led National Democratic Alliance (NDA) and the opposition parties on the selection of their respective candidates to elect the 15th President of India.

While the BJP-led NDA has thus far not revealed its cards, party president J.P. Nadda and defence minister Rajnath Singh are said to be consulting with other political parties for the Presidential election due on July 18. Various opposition parties have also started convening meetings to decide on a common candidate.

Also read: Presidential Polls on July 18, Results to be Announced on July 21: EC

All eyes are now on who the two primary groups would nominate to be their presidential candidate, as till now there have only been two occasions when a President of India has won without a contest.

The first occasion was when Dr Rajendra Prasad was sworn in as the first President of India in 1950, and the second was when Neelam Sanjiva Reddy won in 1977 after the nominations of all the 36 others were rejected.

This time around, the names of several prominent politicians and others in public life have already started doing the rounds as prospective candidates for both the NDA and the opposition.

‘Not in the race,’ say Sharad Pawar and Nitish Kumar

Two names had cropped up right in the beginning. One was that of Nationalist Congress Party leader and former Union minister Sharad Pawar. However, Pawar is learnt to have turned down the offer. Following a meeting with him, CPI (M) general secretary Sitaram Yechury said: “I have been informed that Pawar will not be the opposition face for the presidential poll, other names are under consideration.”

Likewise, the Janata Dal-United leader and Bihar chief minister Nitish Kumar also declared that he was not in the race. “I repeat I am not in the race to become the country’s next President,” he said, in response to a comment from Bihar rural development minister Shrawan Kumar that he was a worthy candidate for the post.

Opposition in favour of Gopalkrishna Gandhi?

Some opposition leaders are veering towards politician and former diplomat Gopalkrishna Gandhi as their candidate for the presidential poll.

He is already learnt to have been approached by some opposition leaders who claimed that his response was positive. Gandhi is the grandson of two great Indian freedom movement leaders: Mahatma Gandhi and C. Rajagopalachari. He had contested for the post of vice-president of India opposite M. Venkaiah Naidu in 2017. 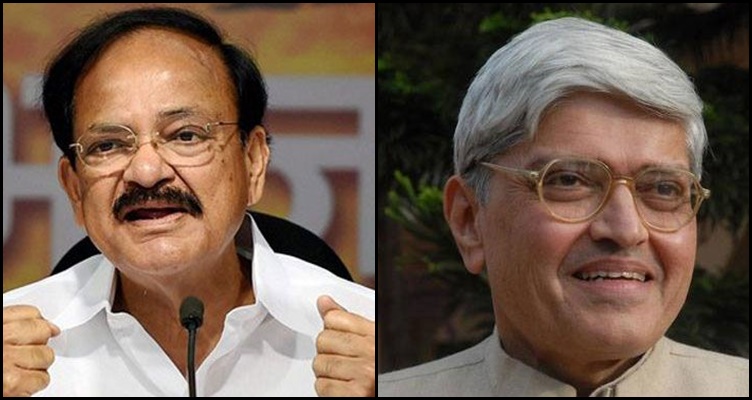 Yet another name doing the rounds from the Opposition side is that of former Union finance and external affairs minister Yashwant Sinha who parted ways from the Bharatiya Janata Party and joined the TMC.

Senior Congress leader and another former J&K CM Ghulam Nabi Azad is also said to be a prospective candidate from the opposition camp. He was the Leader of Opposition in the Rajya Sabha until February 2021 and had served as minister of parliamentary affairs under Manmohan Singh.

Meanwhile, Trinamool Congress leader Mamata Banerjee on Wednesday, June 15, began holding discussions with other opposition leaders in Delhi on the issue of selection of a common candidate for the opposition.

The ruling BJP-led NDA has thus far not revealed its cards on who will be its presidential candidate. Vice-president M. Venkaiah Naidu could be one possible choice considering his long stint in the party and his experience in holding various offices, including many portfolios both in the Atal Bihari Vajpayee and Narendra Modi governments. He also served as national president of the BJP from 2002 to 2004.

However, one strange fact that goes against his candidature is that the saffron party in the recent past only nominated politicians as its candidate for the post of president of India when it was not in power. Be it former vice-president Bhairon Singh Shekhawat, who was pitted opposite United Progressive Alliance (UPA) candidate Pratibha Patil in 2007 or former Lok Sabha Speaker P.A. Sangma who was supported by BJP in 2012 when Pranab Mukherjee was the UPA candidate, they were both fielded in lost causes.

It is also interesting to note that since July 25, 1977, when Neelam Sanjiva Reddy became the sixth president of India, all the presidents have completed their five-year terms. Of the nine presidents, including Reddy, seven have been politicians – all from the Congress.

Another aspect of the politics of the last 45 years has been that only two non-politician presidents were elected during the BJP rule at the Centre – space scientist A.P.J. Abdul Kalam in 2002 and advocate and incumbent President Ram Nath Kovind in 2017.

In this scenario, while the names of several politicians for the presidential candidate are also doing the rounds, their getting a nod ahead of Naidu appears difficult. The party can also spring a surprise by getting yet another non-politician for the post.

Some of the names which may be considered by the party include the current governor of Kerala, Mohammad Arif Khan. He could turn out to be the party’s choice if it decides to use him as a show of its ‘secular credentials’ at a time when various Islamic countries have made their displeasure known at the remarks against Prophet Mohammad by two spokespersons of the party.

The BJP also has a prospective candidate in the tribal leader from Odisha, Draupadi Murmu, who served as the first governor of Jharkhand from 2015 and was the first to complete her tenure in the state. Her name was also discussed at the time of the last presidential elections.

The governor of Telangana, Tamilisai Soundararajan, who is a Nadar leader and former president of the Tamil Nadu unit of BJP, is also considered to be a prospective candidate from the party.

Apart from Naidu, another strong political candidate for the post from BJP could be Thawar Chand Gehlot, who is the present governor of Karnataka. A prominent Dalit leader, he served in the BJP in various capacities, including as a member of the BJP’s Parliamentary Board and the Central Election Committee. He was also minister of social justice and empowerment in the first term of the Modi government.

Apart from these, the names of former Lok Sabha speaker Sumitra Mahajan and tribal leader from Odisha Jual Oram are also doing the rounds.

There is a distinct possibility that these names may get shortlisted for the election to the post of Vice-President if not the President.

Overall, this time BJP, which is in majority in the Lok Sabha and close to a majority with its allies in the Rajya Sabha, has an edge when it comes to the presidential polls.

In the electoral college, which comprises members of both Houses of Parliament and the state assemblies, there are around 10.86 lakh votes. The BJP and its alliance partners are a little short of the halfway mark having around 5.26 lakh or 48% of the votes. Therefore BJP would try to garner support from other regional and national parties to ensure smooth sailing for its candidate.

Also read: Explainer: Why the Presidential Election May Not Be Smooth Sailing for BJP

The prominent parties it is reaching out to are the Biju Janata Dal led by Odisha chief minister Naveen Patnaik (around 31,000 votes), YSR Congress Party led by Andhra Pradesh chief minister Jagan Mohan Reddy (around 43,000 votes) and All India Anna Dravida Munnetra Kazhagam (around 15,000 votes). Some of these parties have already announced their decision to support the NDA candidate.

While the last date for filing the nominations for the elections is June 29, the scrutiny will be completed on June 30. Thereafter the polling will take place on July 18 and the result will be declared on July 21 – paving the way for the new president by July 25.

1950, 1952 and 1957: The first president of India was a freedom fighter, lawyer and scholar Rajendra Prasad who was made the President without a contest in 1950. Thereafter he twice contested the elections in 1952 and 1957. Prasad announced his retirement from the post in 1962, after serving 12 years as the President.

1969: Indian politician and activist V.V. Giri was the only president to be elected as an independent candidate in 1969. He remained in office till 1974. Prior to that, he served as the third vice-president of India from 1967 to 1969.

1974: Fakhruddin Ali Ahmed was elected the fifth president of India in 1974. He was the second Muslim after Husain to become the president and like him also died in office, on February 11, 1977, before he could complete his term.

1977: Neelam Sanjiva Reddy became the sixth president of India. He was elected unopposed in the elections held during the Emergency after the nomination papers of all the other 36 candidates were rejected.