Prashant Kishor Is Raring to Go, But Does Bihar's Politics Have Space for Him?

New parties, even those which have attempted to go beyond caste and community equations, have not fared well in Bihar. 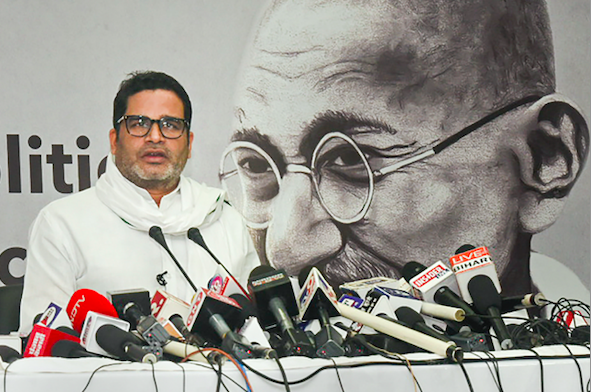 Patna: Election strategist Prashant Kishor is again back in Bihar after three failed attempts to establish himself in the state.

On May 5, he held a press conference in Patna and announced that he would start the ‘Jan Suraaj’ campaign from Champaran on the occasion of Mahatma Gandhi’s birthday. He said that he would travel around 3,000 kilometres in the next eight months and interact with common people to know their views.

He answered all questions that journalists had for him, but left a query on a new political party to the decision of “18,000 workers” associated with his campaign. He made it clear that he would remain in Bihar.

“I had announced that I would quit election management in May 2021. After that I thought for a year and then decided to come to Bihar. I am repeating what I had said when I started the ‘Baat Bihar Ki’ campaign in the year 2020 – you will see me as a political activist in Bihar for many years to come,” he told reporters. Kishor, originally from Rohtas district of Bihar, first entered state politics in the 2015 assembly elections. At that time he was handling election management for the ‘grand alliance’ of Rashtriya Janata Dal and Janata Dal (United). After winning the election, Nitish Kumar appointed him a consultant for planning and programme implementation. But he resigned from his post.

Kishor again returned to Bihar in 2018 as the vice-president of JD(U). But he was expelled from the party as the Citizenship Amendment Act-National Register of Citizens issue raged. He started a data-based campaign named ‘Baat Bihar Ki’ in 2020. A controversy erupted around the campaign as Congress leader and data analyst Shashwat Gautam accused Kishor of stealing the idea and logo of his campaign.

However, the ‘Baat Bihar Ki’ campaign itself went on the back burner and he got busy with election management once again.

After the West Bengal assembly elections last year, discussions began between Congress and Prashant Kishor for the 2024 general elections. This did not work out.

My quest to be a meaningful participant in democracy & help shape pro-people policy led to a 10yr rollercoaster ride!

As I turn the page, time to go to the Real Masters, THE PEOPLE,to better understand the issues & the path to “जन सुराज”-Peoples Good Governance

Underlining the reason behind his return to Bihar, he said, “The change that should have happened in Bihar has not happened in the last 30 years. My attempt will be to make the same change. I want to do something big in Bihar. I want to start from zero. It’s tough, that’s why I came here to do it.”

He said the ‘Baat Bihar Ki’ campaign had to be postponed due to the pandemic. “Jan Suraaj is just an extension of that campaign,” he added.

The quest for political space

The logo of Jan Suraaj has a picture of Gandhi. On its website, is a quote by Gandhi: ‘The Best Politics is Right Action.’

A few hours before the press conference, a one-and-a-half-minute trailer was released on Jan Suraaj’s Facebook page, in which issues like employment, education, health, women’s safety, law and order were talked about.

Along with this and what Kishor said in the press conference, it becomes clear that he is willing to do politics in Bihar around development issues and not around caste identity and ideologies.

But are voters of Bihar ready for this?

Senior journalist and political analyst Manikant Thakur told The Wire, “Actually, Prashant Kishor is currently exploring political possibilities in Bihar. His ‘Jan Suraaj’ campaign is a part of this. During this campaign, if he is convinced that he will be successful in politics, then only will he launch a political party.”

If he forms a political party, whose vote bank will be impacted?

“It is difficult to assess right now because until now he has not launched the party. Nor is it clear what its ideology is. Which party’s vote bank he will break, it will depend on what ideology he follows after joining politics,” Thakur said.

Political analyst Mahendra Suman believes that a middle class is emerging in the country which has little to do with caste identity and ideology. “Unlike America and other nations, there is space for new political parties in India and this is the reason why many new parties have come up and established themselves in the last three decades. Aam Aadmi Party is an example of this,” he said.

“The reason for this is that each caste group has a middle class section, which is not very attached to caste identity and ideology. This section wants to talk on issues like employment, inflation, etc.”

Kishor may well be seeking this section as a vote bank. On Thursday, when he was asked about caste politics, he said, “I completely reject that people vote by seeing caste. Statistics show that people vote irrespective of caste. If every voter is casting his vote on caste lines then Narendra Modi should not have got even a single vote, whereas in Bihar Narendra Modi got the maximum votes.”

Mahendra Suman feels that Kishor clearly has a deep understanding of how elections can be fought effectively and can use this knowledge to fight polls – for himself and not others this time. “But it will be interesting to see what political ideology he follows,” Suman says.

Kishor appears poised to take an anti-Bharatiya Janata Party stand, but is unlikely to have a rigid stance on caste identity and social engineering. Rather, he is likely to talk on issues like employment, corruption, health and education. These are also likely to add to his support base.

“Caste is very dominant in Bihar. Tickets are distributed keeping in mind caste equations. In a state where even appointments are done on caste basis, how can you get votes by not talking about caste?” D.M. Diwakar, another political analyst asks.

If AAP could succeed in Delhi, Kishor too take Bihar? Not really, says Diwakar. “Delhi and Bihar are different. Delhi voters are not governed by identity but in Bihar identity is dominant,” he says. Just before the Bihar assembly elections in 2020, Pushpam Priya Choudhary, the daughter of a JD(U) MLA, had formed the Plurals Party. Like Kishor she too talked about industry, education, health and youth power but her party got only 0.29% votes in 2020 assembly elections.

Upendra Kushwaha, a prominent Kushwaha leader had floated his own party as well, but could not succeed and eventually joined JD(U). Former chief minister Jitanram Manjhi had left JD(U) and floated his own party, but he too failed to attract voters. The same happened with Mukesh Sahani who had also started his own party. He joined hands with National Democratic Alliance in the 2020 assembly election and won four seats. When he left the NDA, all his MLAs joined BJP.

Diwakar says, “The fates of these political parties are classic examples of how Bihari voters treat new parties. Bihar politics has largely been bipolar with the Left floating hither and thither. And I don’t think there is any space for ‘third’ parties.”