While the J&K government has raided three factories allegedly linked to Singh, the ex-forest minister has addressed over 20 rallies reiterating his demand for a CBI probe into the gruesome crime. 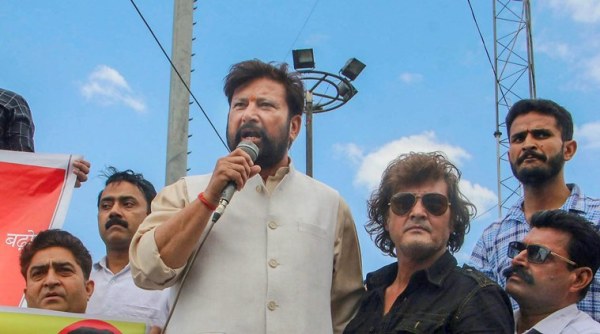 Former BJP minister Choudhary Lal Singh leads a protest rally in support of the demand for CBI probe in rape and murder of the eight-year-old Kathua girl, in Jammu on Tuesday. Credit: PTI

Srinagar: Former J&K forest minister and BJP leader Choudhary Lal Singh, who was forced to resign over his support to the accused in horrifying rape and murder of a child in Kathua, finds himself in trouble after his open defiance against the PDP-BJP government’s stand in the crime that evoked global outrage.

While the state Bharatiya Janata Party (BJP) has recommended action against Singh to the central high command, the state government has raided three factories at two places in Jammu for allegedly possessing medicinal raw material extracted from forests in excess of permissible limits – Singh is learnt to own shares in these industrial units.

Ever since his sacking, Singh has upped the demand for probe by the CBI in the rape and murder of eight-year-old girl from the Bakerwal community despite the J&K police’s crime branch investigation proving that the victim was illegally confined, sedated and gang-raped before she was killed with an aim to drive away her nomadic community from Rassana village in Kathua.

The ex-minister’s rant, a senior BJP leader said, was now damaging the party’s image. On the other side, Singh has been hitting out at every one, from chief minister Mehbooba Mufti to his own party leaders for “surrendering to Kashmir-centric leaders and separatists” and rejecting “peoples’ demand” for probe by the central agency.

On April 20, sleuths of state forest protection force and the state police raided three Kathha manufacturing units in Kathua and Samba and seized the raw material. Kattha is extracted from the wood of Khair tree, whose botanical name is Acacia. 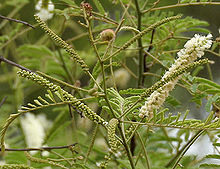 Lal Singh could land into trouble as the forest department under him allowed extraction of Khair wood from villages falling in his constituency, despite court orders. Credit: Wikimedia Commons

The soft wood of the Khair tree is used for extracting oil which has high medicinal value apart from its use in paint, tanning and dyeing industries.

The Supreme Court had banned export and felling of Khair trees, both in forests and private land in J&K in 1996 after the species was found to be on the verge of extinction due to its illegal trade. The ban had hit the farmers of Kathua, Samba, Jammu and parts of Udhampur, Reasi and Rajouri districts. However, in 2013, the ban was lifted to allow commercial exploitation of trees grown on private land and non-forest areas following which the government framed rules under SRO-111 of 2016 for monitoring its sale in the state and export as well.

The raid came barely a week after Singh was sacked as forest minister. “We have seized entire raw material and records from these three places and have ordered for assessment of raw material to find if there was any violation of the rules that govern sale of Khair tree and their felling,” said a police official.

A forest official, however, said as per the preliminary assessment the raw material seized was found in excess of the “acceptable quantity”.

What could land Singh in trouble is that after he took over as the forest minister, the department granted permission to the factories linked to him to restart their operations, last year, almost two decades after they had been ordered to shut, the official said. At the same time the department allowed extraction of Khair wood from villages falling in Singh’s constituency, Basholi, and different villages of Kathua and Samba districts on “pick and choose basis”.

“We have received complaints but everything will be probed to bring the truth to the fore,” said a senior state government official.

Soon after Singh was sacked, the J&K chief minister assigned additional charge of the forest department to deputy chief minister Nirmal Singh. Within days of taking over the charge, Nirmal Singh ordered a crackdown on the factories apart from carrying out a massive reshuffle in the forest department at top levels, removing all officials who were seen to be close to his party colleague.

According to a government official, the forest department, under Singh, had rejected a proposal by the deputy chief minister for permitting commercial exploitation of Khair trees from his constituency of Bilawar and some villages recommended by him.

While the capacity of the three factories doesn’t exceed 10,000 cubic meters annually, the availability of raw material from private land and non-forest area is 20,900 cubic meters, according to a study by Himalayan Forest Research Institute, Shimla.

Despite adequate availability of raw material, the forest department hadn’t allowed establishment of more units, forcing the farmers to sell the raw material to these three units only. The two BJP leaders nurse old animosity. Nirmal Singh, who was professor at Jammu University, had a meteoric rise in state politics. He was handpicked by the central leadership during the 2014 assembly elections and went on to rise to the number two position in the state government.

An old hand in state politics, Lal Singh is considered to be close to the minister in the PMO, Jitendra Singh, and had lobbied unsuccessfully on some occasions for removal of Nirmal Singh from the position.

On Saturday, Lal Singh broke his silence over the raids though he tried to link these with his demand for a CBI probe into the Kathua rape. “Targeting my friends and relatives will not shatter my resolve for seeking a CBI probe,” he  said addressing a series of public meetings in border villages, referring to the raids on the factories reportedly owned by him, his friends and brother.

A day before the raids, Rajinder Singh Babbi, his brother held a press conference in Kathua and demanded that the deputy chief minister be sacked and replaced by Jitendra Singh.

In an open revolt against his party and the government, Lal Singh has addressed more than 20 rallies in different villages of Kathua during past one week, rejecting the crime branch investigation and in a bid to drum up support for demand for the CBI probe into the gruesome crime.

“He (Singh) is openly revolting against his party’s stand and has turned into a fugitive, bringing shame to the party,” said a senior BJP leader.

Hitting everyone, Singh has even demanded action against state party president Sat Sharma saying he had gone on his “directions” to attend the pro-rapist rally in Rasana on March 10.

Lal Singh has also targeted chief minister Mehbooba Mufti for her “double standards”, saying she had demanded CBI probe into the rape and murder of  the Shopian sisters-in-law in 2009 while in opposition, but was opposing the same demand into the Kathua case.

That Singh didn’t attend two meetings called by the party during the past 10 days shows his “disregard for party dharma”, said another BJP leader. Lal Singh didn’t respond to repeated calls from The Wire for his comment on the raids, his alleged links with the raided factories and his demand for a CBI probe.

“We have communicated to the high command about his (Singh) activities which are detrimental to the party at the state as well as national level,” said the party leader.

Amid this open revolt by Lal Singh, the BJP high command has summoned the state leadership, including Nirmal Singh, Sat Sharma and general secretary (organisation) Ashok Koul to New Delhi for a meeting, to be chaired by party president Amit Shah. All eyes will now be on the outcome of the crucial meeting.