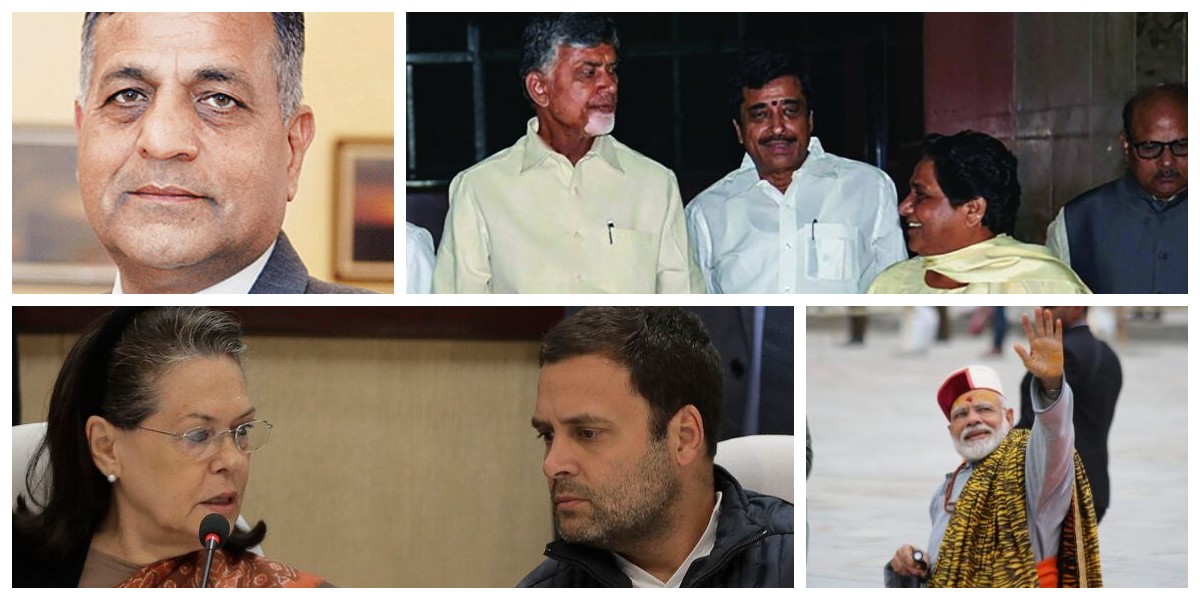 Every morning till the election results, The Wire’s reporters and editors bring you Poll Vault – a summary of the most important political developments, all in one place. To get it straight in your mailbox, sign up here.

New Delhi: Some called him a “pollgrim” while some termed his visit to temple as “pollgrimage”. A day after Prime Minister Narendra Modi addressed a press conference in the national capital but refused to take questions, he potentially violated the model code of conduct (MCC) by letting select mediapersons document his trip to the holy shrine of Kedarnath in Uttarakhand.

The pollgrim’s progress: recorded for posterity on a 2019 digital camera and transmitted instantaneously to promote the #FakeInIndia campaign pic.twitter.com/NPNOVJViqi

May 18 – a day before the last phase of the parliamentary elections – was a no-campaign day. Yet, Modi remained at the top of his PR game as he took along a visual media team to shoot his “two kilometre trek” to the temple, and then his “15-hour meditation” in a “cave”.

A robe passed off as his trekking suit while only a saffron sheet in the Himalayan terrain protected him from the severe cold while he meditated. By the end of the day, Modi’s televised “spiritual journey” had successfully managed headlines – mission accomplished.

This is probably what the Modi regime has come to represent. His PR machinery has always been super-efficient, but even the media is now more interested in letting Modi capture attention through his publicity tricks instead of inquiring whether such a televised exercise is permissible on a no-campaign day.

PM Modi is clearly using official machinery to do his meditative & silent Kedarnath campaign when he is clearly a candidate at Varanasi today. He should have avoided TV cameras which are with him even in so called meditation. EC must examine this possible violation.

The last five years have seen the prime minister project himself as the hands-on person for every development in the country. So much so that the PMO became synonymous with the government that also has a cabinet. The BJP, too, has hinged its campaign around the cult of Modi.

Nonetheless, the question remains whether such centralisation of power around one person suits India’s diverse democratic set-up or not.

Election commissioner’s note to the CEC

Meanwhile, small but powerful dissent by some people in power continues to keep the waning democratic spirit alive.

Ashok Lavasa, an election commissioner, recused himself from all meetings on MCC issues. Earlier, Lavasa did not agree with the Election Commission’s majority decision to give Prime Minister Narendra Modi and Bharatiya Janata Party president Amit Shah clean chits in complaints that said they violated the MCC.

According to the Hindustan Times, Lavasa, a former finance secretary, said he will attend the meetings only if the EC – also comprising CEC Sunil Arora and EC Sushil Chandra – records dissent notes and minority decisions in its orders.

“I am being forced to stay away from the meetings of the full commission since minority decisions are not being recorded. My participation in the deliberations of the Commission becomes meaningless since my minority decisions go unrecorded,” Lavasa wrote to the CEC on May 4 in a letter that became public on Saturday.

Over the last two months, Modi was cleared of charges of violating the MCC six times. Lavasa, however, disagreed with these decisions.

As the matter of internal conflict in the ECI became public, the poll body was forced to revisit complaints against the NITI Aayog and PMO.

As Modi meditated, a large section of opposition leaders met behind closed doors to discuss possibilities of alliances in case of a hung outcome in the polls.

Naidu, who has been at the forefront of alliance talks, met Nationalist Congress Party’s Sharad Pawar, Loktantrik Janata Dal chief Sharad Yadav and then flew down to Lucknow to meet Bahujan Samaj Party’s Mayawati and Samajwadi Party president Akhilesh Yadav.

He also met Congress president Rahul Gandhi earlier. The leaders agreed to have a strategy in place in case the BJP-led National Democratic Alliance falls short of the majority and still stakes claim to form the government.

Meanwhile, Sonia Gandhi also met senior Congress leaders like formerready prime minister Manmohan Singh, Ahmed Patel, A.K. Antony and party president Rahul Gandhi. Sonia, who has stayed away from decision-making in the party after her son Rahul took over, reportedly told the leaders to gear up for a possible hung outcome.

The deliberations among political parties are likely to become hectic once polling ends on May 9.