Politics Revolves Around a King, a Palace and Old Feuds in This Amethi Seat

Sanjay Sinh – the popular 'Raja of Amethi' – is contesting the Uttar Pradesh assembly elections after 33 years, on a BJP ticket. 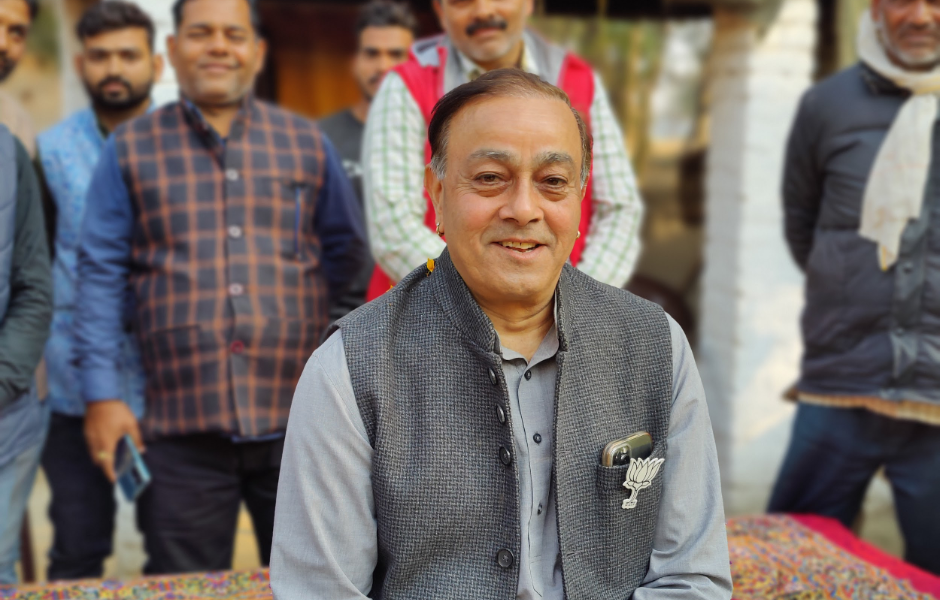 Amethi (Uttar Pradesh): Amethi has always been a high-profile constituency in Uttar Pradesh. In the 2019 Lok Sabha election, Congress’s Rahul Gandhi lost to the Bharatiya Janata Party’s Smriti Irani despite Amethi being called the bastion of the Congress party.

Observers say that while it’s true the seat has shifted from the Congress to the BJP in the Lok Sabha, it hasn’t been a bastion for any particular political party in the assembly elections. The seat has moved between the BJP, Samajwadi Party and Congress.

But in addition to the high-level candidates and the rivalry between the Congress and the BJP, Amethi has something special going on. This seat is greatly influenced by a former royal family, whose “king” Sanjay Sinh is fighting this election on a BJP ticket.

Sinh, 70, also known as the Raja of Amethi, will contest an assembly election after 33 years. Once close to Congress’s Sanjay Gandhi and Rajiv Gandhi, he now speaks against the party, as he has recently joined the BJP.

Who is Sanjay Sinh? The politician is not only a political figure, but also has a colourful social and personal background.

From the controversial charge of murder and the rivalry between his two wives and rebel children, Sinh has seen several ups and downs.

The elections in the region are near, to be held on February 27, the fifth phase of the Uttar Pradesh elections.

In Amethi’s Bhadar block, villagers waited for Sinh for hours when he was scheduled to visit for his election campaign. When he finally arrived, the villagers stood up and pulled out their chairs. Afterwards, the villagers told this correspondent that nobody dared sit before him.

“It is not because of fear or because he belongs to a royal family, but out of respect for the person that he is,” one villager said. The villagers said they don’t speak loudly when Sinh is in the area either.

A crowd of about a hundred men gathered around him, chanting slogans in his support: “Amethi me agar na hota usar, toh na Sanjay Sinh jaisa hota koi dusar (Had the land in Amethi not been barren, there would not have been another leader like Sinh).”

There is also great respect for his father, the late Rananjay Sinh, who, according to Sanjay Sinh, led the Congress to Amethi.

The villagers say Sinh had a personal interest in improving the area’s agriculture, as he himself owned a lot of land and plots.

His “Raj Mahal”, situated in the Ramnagar area, is a huge mansion with lush gardens all around, surrounded by large mango groves. The mansion was constructed in the 19th century, the plate outside reads. 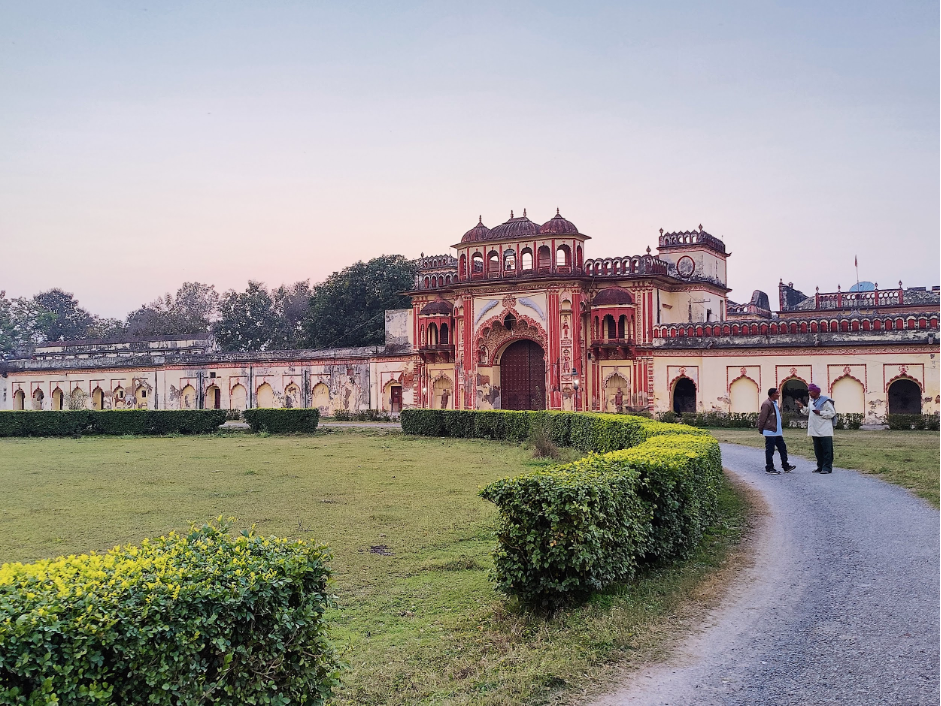 Amethi’s land has traditionally not been fertile. Although farming is an important occupation for villagers, it is seldom profitable as input costs are high and yields low.

In the 1985 assembly elections, Sinh’s early days in politics, he got 98% of the total votes polled, not short of a record. More than one lakh of votes out of the approximately 3.81 lakh voters in this seat went to him, ensuring an overwhelming victory.

Later, he went on to be elected in the Rajya Sabha and Lok Sabha. He was also a state minister in the successive Congress-led governments. After 33 years, he is once again back in the competition on this assembly seat.

People who came to his campaign event said that Sinh has secured jobs for at least 10,000 people during his past tenures, the benefits of which both the families of those people and Sinh are still reaping.

Many upper caste voters in this district that The Wire spoke to said that they support the SP and hope for its victory, but will vote for Sinh, as he is their pride.

In 1988, Sinh was charged with conspiracy in a high-profile murder case involving Syed Modi, a famous badminton player.

Sinh was said to have been in a relationship with Modi’s wife, Ameeta. However, charges were subsequently dropped two years later.

Sinh then went on to marry Ameeta, after leaving his wife of 28 years Garima Sinh, with whom he has two sons and one daughter, Anant Vikram, Saivya and Mahima.

In 2016, Garima returned to the royal palace (Raj Mahal), demanding not only place in the palace, but also political space. Claiming to be Sinh’s “lawfully wedded wife”, Garima and her three children declared that they would not allow Ameeta inside.

A fight erupted between her and Ameeta. The two then contested against each other in 2017.

Garima won the seat in the 2017 legislative elections on a BJP ticket, beating Ameeta who ran on a Congress ticket. Locals said that the people of Amethi felt Garima’s pain, even comparing her to Sita, and this attracted the sympathy of voters.

Garima’s return is considered to be such an important event that it led to violence and subsequent curfews for many days in neighbouring regions due to unrest.

Since then, family equations have not changed a great deal. There is still a cold war between Sinh and Garima, and their son Anant, who accused his father of injustice against his mother.

The two wives currently live in the same palace but maintain a healthy distance inside, with separate kitchens and living arrangements.

But now, Sinh switched yards and moved to the BJP. Anant, also a member of the BJP, is said to have demanded a seat for his wife, Sambhavi, who comes from a royal family in Chhattisgarh.

Ameeta, his second wife, was elected three times from this seat, but this time the ticket was given to Sinh himself. The BJP couldn’t take a risk.

Analysts say that the BJP has played it smart by giving the ticket to Sanjay himself, without involving any of his wives.

The fact that he is easily accessible to people, and even visits local events at people’s houses “despite being from the royal family”, makes him a hugely popular choice. Sanjay Sinh during his campaign in a village. Photo: Ismat Ara/The Wire

When asked about his family, he politely refused to comment, saying that “not all personal matters should be brought into public life”. It is apparent that Sinh hopes to take attention away from the long-standing family saga.

On the other hand, the SP candidate is the wife of Gayatri Prajapati, who is currently in prison after being sentenced for rape after a lengthy scandal.

Prajapati belonged to a very poor family, but was fortunate when the price of land bought by him suddenly increased.

After many unsuccessful attempts in politics, he ended up winning the 2012 elections. He is said to be very close to SP founder and former chief minister of UP Mulayam Singh Yadav.

Now in his 60s, Prajapati is behind bars with an uncertain political future. That is when his wife, Maharaji Devi Prajapati, came into the picture.

After the SP gave her a ticket, locals say that Prajapati’s wife was almost certain of a victory – until Sanjay Sinh entered the fighting ground.

Even though the Prajapati community represents a small percentage of the voters in this seat, the core SP voters would have done the trick.

Even then, it is said that she will still get votes from certain sections that believe Prajapati was unjustly convicted. In every election rally, she and her two daughters burst into tears, alleging that Prajapati has been framed. But compared to Sinh, she is a political novice.

PM’s chopper for a ride

Such is the aura of Sinh, that even a chunk of Muslim votes are said to be going to him this time despite him contesting on a BJP ticket.

“Sanjay Sinh is such a strong candidate that he can unite people across religion and caste lines,” one villager told The Wire.

There are many famous anecdotes on Sinh’s life beyond the murder charge and fighting wives.

At his campaign rally, people said that Sinh, even at the age of 70, goes for a morning walk and cycling by himself every day, without gunners.

He was such good friends with then PM Rajiv Gandhi, that at one point he personally requested the then prime minister to change the eligibility criteria for railway jobs so people in Amethi would be able to apply.

Many hundred people were then able to secure jobs, and this seems to be Sinh’s impact on his voters.

A famous incident that people speak of is when he took Rajiv Gandhi’s personal helicopter for a ride. When asked about this by this correspondent, he let out a smile but did not comment. 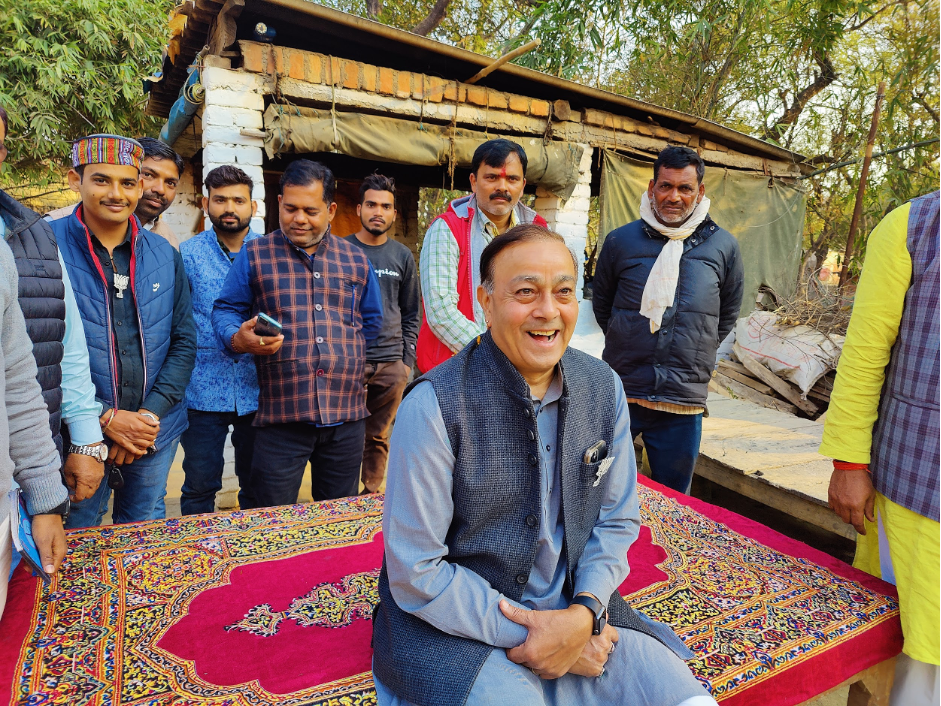 Sugar mill, but no sugarcane

He was once flying with Rajiv Gandhi, when Sinh introduced the idea that a sugar mill should be set up here as the region has a lot of sugarcane production.

In fact, the plants he had shown from the sky to the prime minister at the time were another plant that looked like sugarcane. Amethi had never had any sizeable production of sugarcane.

Asked about this story, without getting into details, he smiled and said, “Jahan industry aa jayegi, toh kheti bhi hone lagegi. Agar kheti ayegi toh industry bhi ayegi (Once an industry is set up, the rest will happen slowly),” he said.

Now that a sugar mill has been in place for some decades, traders buy sugarcane from farmers in nearby districts, and bring it here for crushing.

Industrialisation has been a longstanding demand in Amethi, and even MP Smriti Irani has time and again promised the same.

Locals said Sinh could have been a chief ministerial candidate as well, but he’s focused on the development of his native district, Amethi.

Ashish Shukla, the Congress candidate, joined the party only after his candidacy was ruled out by the BJP, and Sinh received the ticket instead. He is said to have a hold among Brahmins in the seat.

Although Amethi is described as a Congress stronghold, assembly elections have often been won by other party candidates.

While talking to The Wire, Sinh said that this time he is certain that he will win with an overwhelming majority, and break his own record of securing over 90% votes in the 1985 assembly elections.

He accused the Congress of being a headless party. If he wins, he promised to bring about a marketing revolution for farmers struggling to sell their produce. “We will enable the farmers to learn the art of marketing,” he said. While referring to close to 8,000 jobs that he ensured for the youth of UP across his political career, he said that this time he will try to increase his target and given tens of thousands of jobs.

“Ultimately, I want each and every person of Amethi to realise their full potential,” Sinh said.