Vikas Dubey, who massacred eight policemen on Thursday night, has had deep associations with politicians of all stripes. 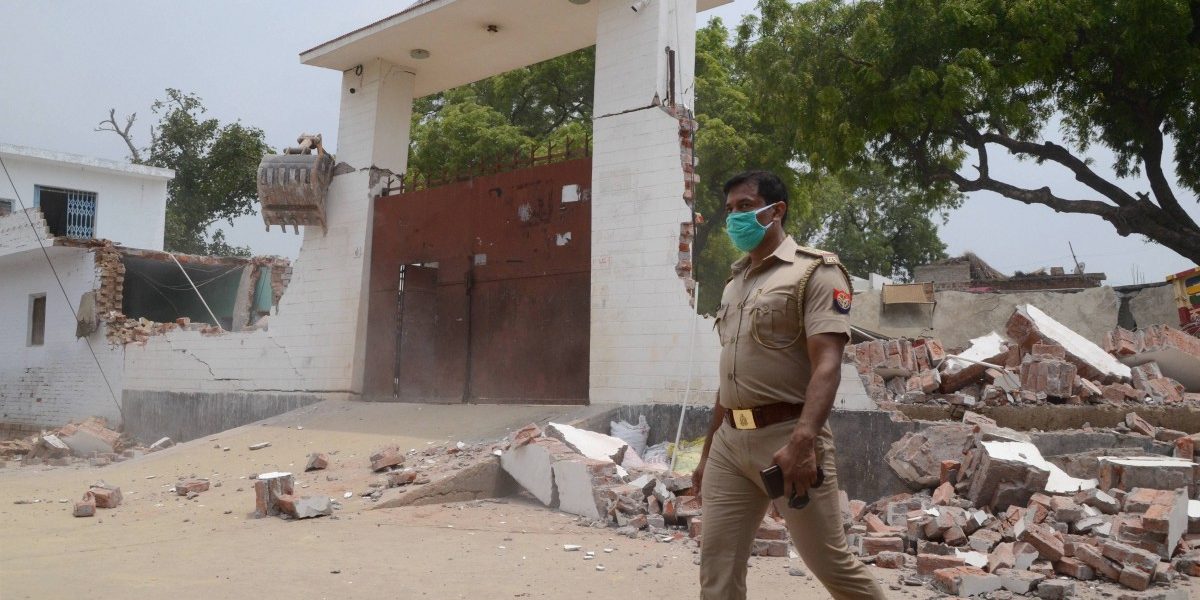 Debris lie on the ground following the demolition of the residence of criminal Vikay Dubey, after an encounter in Bikru village where 8 police personnel lost their lives, in Kanpur, Saturday, July 4, 2020. Photo: PTI

Lucknow: Uttar Pradesh gangster Vikas Dubey whose house was bulldozed by the authorities on Saturday, operated for years with full impunity thanks to the continued political patronage of various parties. He had no fear even of the police, eight of whom were massacred by him and his henchmen in his native village, Bikru, in Kanpur (Dehat) district on the night between Thursday and Friday.

Dubey, who continues to evade the police dragnet two days after the sensational and gory incident, has a track record that can be matched only by pathological criminals often seen in Hollywood or Bollywood movies. When the Amazon series Paatal Lok featured an imaginary UP badlands gangster, Dunallia Gujjar, many viewers thought him an anachronistic relic of the 1980s. But even his fictional clout was not a patch on the exploits of Dubey in the heart of contemporary Uttar Pradesh.

The frustration of the police became visible on Saturday when hundreds of constables descended on Bikru to supervise the running of bulldozers over Dubey’s 10,000 sq ft mansion in the village where he and his gang unleashed an unprecedented bloodbath.

Notorious for criminal acts ranging from murders, loot, extortion ad assault to kidnapping for ransom, the dreaded gangster always got away even as more than 60 criminal cases were still pending against him.

Strangely, he did not figure in the list of ‘encounters’ carried out by the Yogi Adityanath government as a part of the chief minister’s much- touted anti-crime campaign over the past three years, when a large number of lesser-known criminals were shot and killed.

Significantly, this was not the first time Dubey had attacked policemen.

In 2001, he chased and shot down a prominent BJP leader, Santosh Kumar Shukla, inside the premises of Shivli police station where Shukla had sought refuge. And he did not spare the cops either; two of them were also gunned down by him. Rajnath Singh of the BJP was chief minister at the time.

To top it all, even as the murder took place inside the precincts of the police station, all witnesses including Shukla’s driver and the policemen on duty turned hostile during the trial. Sure enough, Dubey got acquitted by the court and walked free. Even a 30-Springfield automatic rifle, that was seized from his possession at the time of his arrest was conveniently released by the authorities sometime later. Such was his clout.

Locals in Bikru who were too scared to be identified have confirmed to reporters that Dubey lived like a lord in his sprawling ‘kothi’ in the village, where no election could be won by anyone without his blessings.

UP’s caste-ridden politics led him to emerge an undisputed Brahmin leader of the area. And that was how he managed to get his wife, Richa Dubey, elected as deputy head of the district panchayat in 2015. When the killing of eight policemen saw the opposition in UP accusing the Adityanath government of fostering crime in the state, the BJP hit back by releasing a poster from her election campaign in which she had used photographs of Samajwadi Party leaders Mulayam Singh Yadav and Akhilesh Yadav. The only problem is that Dubey’s associations stretched across to leaders of all parties, including Brijesh Pathak, formerly of the Bahujan Samaj Party and now a BJP leader and minister in the Adityanath government.

In line with his political connections, policemen dutifully paid obeisance to him. “Policemen in uniform were made to touch his feet and more often than not, it was he who managed to ensure the posting of his handpicked cops in his domain”, disclosed a former officer posted in the area.

His strong political connections with top leaders of successive ruling parties, including BJP, SP and BSP gave him the licence to boss over district superintendents of police in his area, most of whom did not dare rub him the wrong way.

Top police officials in Kanpur now admit that intimidation of cops by Dubey was a routine affair. “He seemed to get sadistic pleasure in humiliating men in khakhi, whom he treated with contempt”, said another local official.

In October 2017, this wanted criminal was arrested by a special task force from a Lucknow hideout and charged with violations of the Arms Act. While in prison, he allegedly planned a hit on his cousin and rival, Anurag Dubey. But at some point, he ended up getting released, and re-establishing himself.