With the Congress and BJP trading charges over selective enforcement of official housing rules, it is now up to the High Court to adjudicate the matter 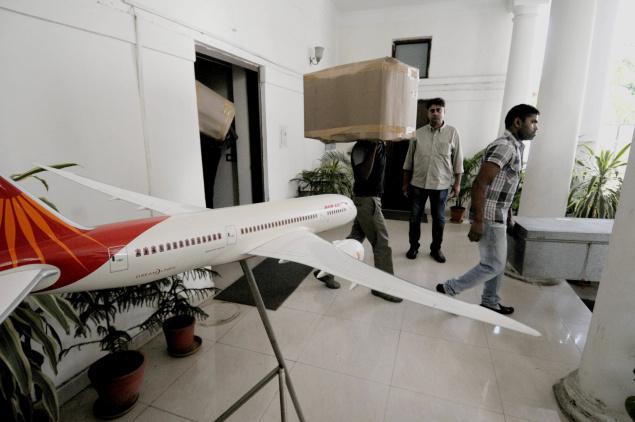 Former Civil Aviation minister and RLD leader Ajit Singh's belongings being carried out after he was evicted from his bungalow in Lutyens' Delhi. PTI photo.

New Delhi: There’s  a story a well-known city sociologist likes to tell about the sense of entitlement most netas have about the Lutyens’ Bungalow Zone, the central core of the capital that houses the Indian nomenklatura. A student of his, son of a second-generation politician whose political base is in Uttar Pradesh, once said he was going to be spending the summer vacation in his “ancestral home.” Asked whether this was in UP, he responded, somewhat surprised, “No, it’s in central Delhi.”

Having evicted nearly 460 people from the Lutyens Bungalow Zone in its first year in office, the Narendra Modi government may have created a record of sorts. But it has also come in for some severe criticism from opposition parties. The opposition is accusing the NDA government of a vendetta and of double standards – hounding them for supposed violations of official housing norms, while their own senior leaders flout the same rules.

The Delhi High Court will be hearing a petition on July 2nd, filed by two former Congress Cabinet Ministers, Ambika Soni and Kumari Selja, against the Centre’s move to evict them. Soni and Selja had been served eviction notices by the Directorate of Estates on May 25, asking them to vacate their bungalows by June 10. Soni occupies 22 Akbar Road while Selja stays at 7 Moti Lal Nehru Marg. The court has issued notices to the Central Government, Directorate of Estate and the Rajya Sabha Secretariat and stayed the eviction of the two ministers.

KTS Tulsi, appearing for Soni and Selja, accused the ruling BJP government of “mala fide intention against members of opposition” in asking them to shift from Type VIII accommodation – the largest general size of official bungalow available – to Type VII. He claimed that these bungalows were allotted to the two Congress MPs from the Rajya Sabha housing pool and they were entitled to stay in them till a month after their term expires, which is four years from now.

The Modi government insists the two former ministers are only entitled to Type VII accommodation; and that they need to move as Type VIII accommodation is in short supply and is required for four Union ministers as per their entitlement.

A week ago, Rural Development Minister Chaudhary Birender Singh, who has been allotted Soni’s 22 Akbar Road bungalow but is still waiting for her to move out, publicly complained that despite being a cabinet minister for more than seven months, he has not had proper accommodation all this while. “Roti, kapda aur makaan are essential requirements and if all three are assured to a person then his efficiency will definitely increase,” he had said at a housing conference.

Congress leaders, however, allege that the high-handed approach of the Modi government and in particular Union Urban Development Minister Venkaiah Naidu went against the spirit of democratic coexistence and accommodation.

Talking to The Wire, former Union Housing Minister and senior Congress leader Ajay Maken said: “We had allowed Naidu himself to continue staying on in the bungalow he had been allotted during the Atal Bihari Vajpayee Government for many years after the UPA government had come to power in 2004. Similarly, I recall former Speaker Najma Heptulla being allowed to stay on in her bungalow for several years. We never had any vindictiveness in our approach.”

Maken said the BJP Government had different standards for its own leaders: “Several of their senior leaders like L.K. Advani (who stays at 30 Prithviraj Road) and Murli Manohar Joshi (6 Raisina Road) continue to occupy bungalows they are not entitled to. Similarly, former Minister Jaswant Singh (15 Teen Murti Lane) who fought as a BJP rebel but lost and is in a coma, is still in possession of a big bungalow.” Incidentally, all these bungalows are Type VIII.

The Urban Development ministry had served an eviction notice to Soni and Selja claiming that they were only entitled to bungalows meant for MPs, but not ones meant for ministers. In the case of Selja, the ministry said the bungalow was transferred from the central pool to the Rajya Sabha pool for allotment to her. As such, it was to return to the general pool after her term as minister ended.

The Ministry’s claim appears to run contrary to the rules stated on page 135 of Chapter 4.18 on Accommodation in Rajya Sabha. On July 31, 2006, the House Committee of the Upper House had adopted guidelines providing for Type VIII accommodation to a “Former Union Cabinet Minister and Former Speaker of Lok Sabha/ Former Governor of a State/Former Chief Minister of a State”.

Even former BJP Union Minister, Vijay Goel, while talking to The Wire said the responsibility of allotting a Type VII or Type VIII bungalow vests with the House Committee. However, he said, “there are no hard and fast rules on which one would be allotted. There are guidelines but no strict definitions. Also there are some `minister bungalows’ which are meant for ministers and there are some bungalows which are occupied by ministers out of their own choice. When a new government comes to power, it usually exercises the right to get minister bungalows allotted to its ministers.”

As for senior leaders continuing to occupy bigger bungalows, he said six-time MPs are entitled to Type VII bungalows: “Also in case of very senior leaders, most often relaxations are permitted by the House Committee.”

In the case of MPs too, he said the allotment procedure is flexible: “The size and type of accommodation allotted also depends on the requirement. “For example in case a film star gets elected, a bigger bungalow or flat with a lawn is allotted since there are more visitors. Likewise MPs from Delhi get bigger accommodation because more residents visit them each day.”

In a 2014 affidavit, the Centre had submitted that there were 126 Type-VIII bungalows in the general pool while there were more in different pools such as Lok Sabha, Rajya Sabha, Supreme Court, High Court and Defence. The government had also submitted that BJP president Amit Shah had also been allotted a Type VIII bungalow at 11 Akbar Road as he now headed the country’s leading political party.

This is not the first time that the issue of allotment of bungalows by the BJP government has gone to court. The Supreme Court had last year taken suo motu cognizance of a letter which had alleged large-scale misuse of discretionary power in the allotment of government bungalows to undeserving persons. However, after the government submitted its response in the form of a detailed list of allottees, the court had averred, “we cannot say that there was indiscretion in the exercise”.

Solicitor General Ranjit Kumar had then claimed that the Centre had achieved a major feat by getting 363 of the 374 houses allotted to MPs who were defeated in the last general elections vacated. Since then, the number of houses vacated has increased to 460. While 44 left soon after they received vacation notices, the Directorate of Estates had to issue nearly 380 eviction notices against the remaining persons. Of these, 37 had to be forcibly evicted. In some instances, as in the case of former Prime Minister Charan Singh’s son and former Union Minister, Ajit Singh of the Rashtriya Lok Dal (RLD), the process of eviction was action-packed, with the Directorate of Estates staff actually throwing the goods of the occupants out in the lawns. The eviction of the RLD leader from 12 Tughlaq Road, a bungalow he wanted converted into a memorial for his father Charan Singh as it had been with the family for 36 years, was also marked by a clash between the police and his supporters. In the case of former Prime Minister Chandrasekhar’s son, Neeraj Shekhar, too, force had to be used to evict him from his 3 South Avenue Lane bungalow as he refused to vacate despite eviction notices.

However, the rule has not been uniformly applied. As Congress MP Sushmita Dev said: “Following the rulebook was good but how would Mr Naidu now explain his 10-year-stay in a bungalow he was not entitled to?”