With an opposition bent on slamming the Left for its pro-Hindutva moves, Vijayan's decision to train guns at Amit Shah is a significant step. Kochi: Pinarayi Vijayan’s home village of Dharmadom in Kannur had been buzzing with the excitement of a rally addressed by the leader after what was a pretty long gap.

With a charged audience on his side, Vijayan – who is called ‘captain’ by his supporters on social media – took the lectern. What followed was one of the most scathing attacks on Union home minister Amit Shah by a member of the opposition on a chair as high as a chief minister’s.

This was not surprising. At Thiruvananthapuram, a day ago, Shah had levelled serious allegations against the chief minister by attempting to connect him to the gold smuggling case.

In what was not officially an election rally, Vijayan said, “Amit Shah of those days [the 2000s in Gujarat] was the epitome of communalism. He has a bigger post now, but doesn’t seem to have changed much.”

Vijayan was referring to a book by journalist Rajdeep Sardesai on the Gujarat genocide.

“He has posed a few questions to me but he should remember that it was not me who was in jail for staging a fake encounter. Does Mr. Amit Shah remember whose name was mentioned in the charge sheet of a fake encounter case, [who] was arrested and then jailed? The same person was accused of murder, kidnapping, extortion and illegal surveillance. And on mysterious deaths, is he speaking from his own experience?” Vijayan asked.

If the BJP thinks that they can align with the INC and topple us, they will be disappointed. Whenever they have tried to create divisions, we have stood for the unity of this nation. Forever, Kerala will be unflinching in its struggle against communalism, upholding secularism.

Shah had said Vijayan distorted facts and levelled baseless allegations against investigating agencies in the gold smuggling case. He targeted questions that had often been brought up by the opposition in Kerala at Vijayan — adding one on a mysterious death of a witness which flummoxed even BJP members because it was a new allegation.

No such information of a death is available to the public yet. Even the Kerala BJP chief K. Surendran appeared clueless.

“He is the Union home minister, and must have more information on this than us. I am sure that he will disclose it when he comes next time,” said Surendran. 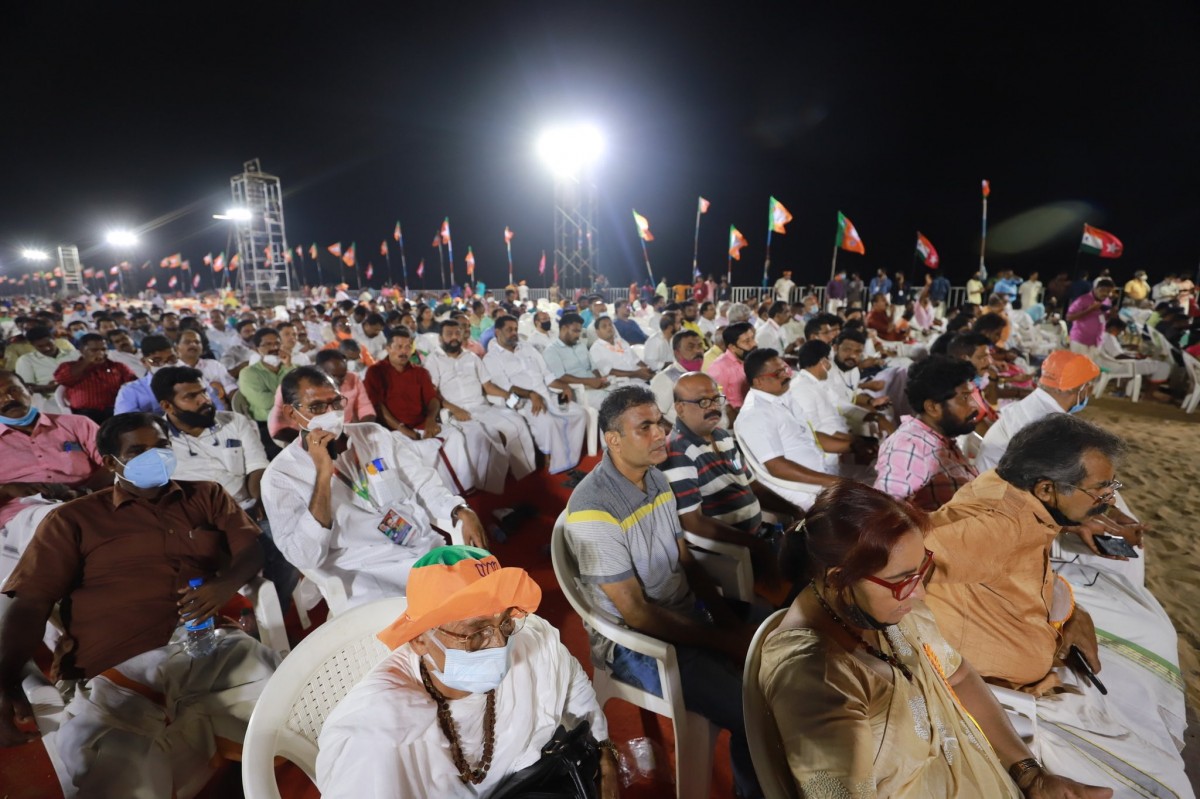 Many political observers in the state hold the view that Amit Shah unwittingly provided an opening for the Left Democratic Front
to take on the BJP-led National Democratic Alliance head-on with this misplaced allegation. This opportunity comes to LDF at a time when the Congress-led opposition United Democratic Front has been squarely blaming it of being soft on Hindutva politics.

While in West Bengal, chief minister Mamta Banerjee is known for her characteristic outbursts against BJP, this would be the first time a chief minister of a state has attacked Shah exclusively, that too by pointing out aspects of his past that the BJP has been keen to bury.

The CPI(M) – after a thumping and unexpected victory in the local body polls – has been attempting an alternative tactic to capture the Christian minority vote bank which had hitherto been inaccessible to it. The entry of the Christian-dominated Kerala Congress (Mani) party in the LDF has helped. However, that the  CPI(M) leadership is wary of the decline of Hindu votes is evident front party leaders and Vijayan himself making statements on the Indian Union Muslim League (IUML) and its domination in the UDF.

The party’s acting state secretary A. Vijayaraghavan has controversially said that minority communalism could prove “more dangerous” than its counterpart – anti-minority communalism – at times. Even though party leadership had quickly stepped in to correct that damage done, it succeeded in polarising the field further.

The UDF, with the IUML and a new ally, the Jamaat-e-Islami-backed Welfare Party of India was quick to pounce on the opportunity to say that Left parties had become a B-team of the Hindutva forces. 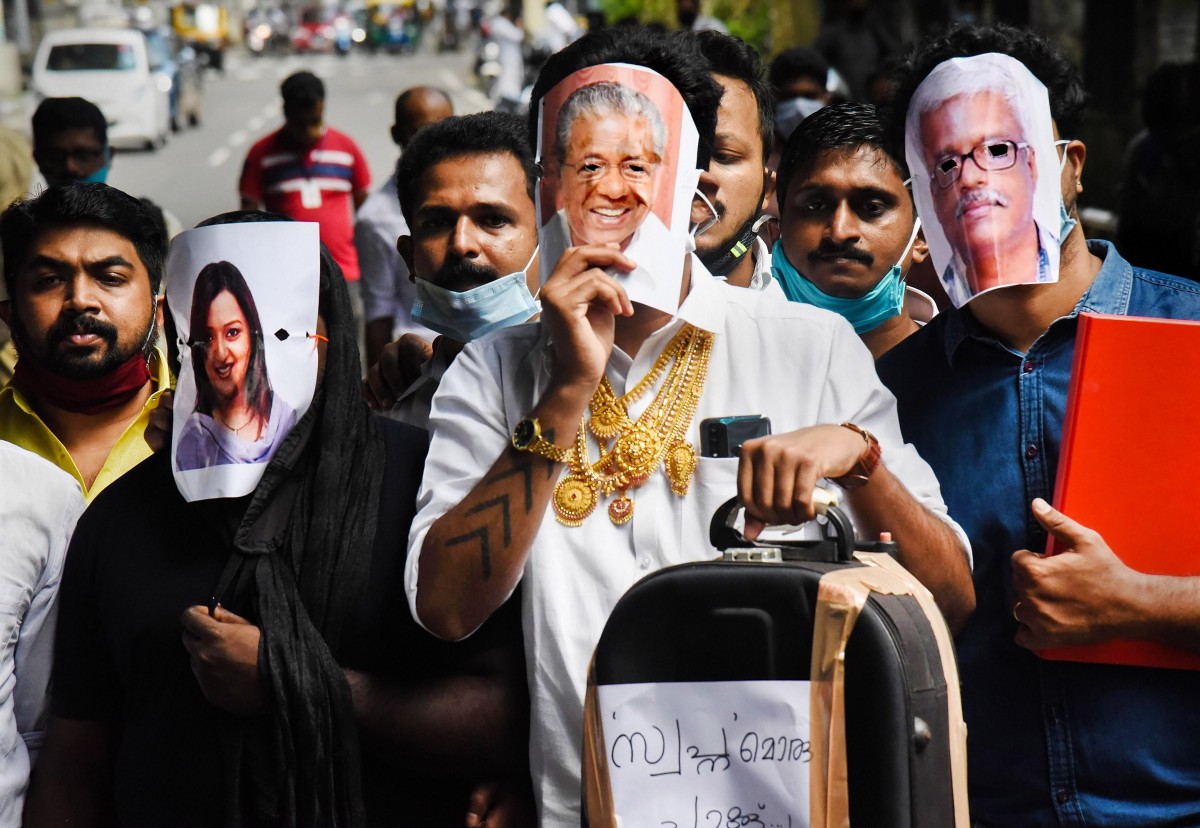 However, with his single rally at his home village, Vijayan appears to have turned things around. In daring the second most powerful rightwing politician in the country, he has cemented his ‘captain’ aura at a crucial time.

It is obvious that no party or alliance can win the Kerala assembly polls without the support of Muslim voters. The only exception to this was in 1987 when the CPI(M)-led LDF constituted what they had called a “purely secular” coalition, with no party constituted on religious lines in the alliance – which many political pundits now retrospectively observe was an essentially pro-Hindu move.

In 1991, Rajiv Gandhi’s assassination led to a wave of sympathy that led to a sweep for the UDF, but in the by-elections after the Babri Masjid demolition of 1992, Muslims supported the Left. It won with a thumping majority in 1996.

In 2001 it was local issues including a hooch tragedy in south Kerala, coupled with factionalism inside the CPI(M) that set the tone of the election, in which Left lost miserably. In 2004, the Muslim population once again rallied behind the Left and they won a record number of seats – 18 out of 20 – in the Lok Sabha elections. Even the IUML strongholds voted LDF.

In 2006 too, the LDF enjoyed near total support of the Muslim community. Even though the Left lost power in 2011 it was with a slender margin. This pattern of voting was also seen in the 2019 Lok Sabha polls where the Congress led by Rahul Gandhi swept the state by winning 19 of 20 seats. The front had lead in 113 of the 140 assembly segments.

The LDF was on troubled ground when they faced the local body elections in November, 2020, with allegations over the gold smuggling case looming large. Riding on the welfare measures of the state government and its remarkable ability to handle disasters like the flood, and the Nipah and COVID-19 outbreaks, the ruling front weathered all odds to register a remarkable victory.

With an opposition bent on securing an anti-LDF minority consolidation, Vijayan’s decision to train guns at Amit Shah has given a fresh turn to events.