Prime minister Narendra Modi addressed the Lok Sabha in an over hour-long speech on February 6. Amidst the attacks on Congress and the Left, discussions on the controversial Citizenship Amendment Act (CAA) and the protests opposing the legislation, the PM also spoke about the scrapping of provisions of Article 370.

During his address, PM Modi attributed the following quote to former chief minister of Jammu and Kashmir Omar Abdullah: “आर्टिकल 370 को हटाना ऐसा भूकंप लाएगा की कश्मीर भारत से अलग हो जायेगा (The abrogation of Article 370 would bring a massive earthquake that it will divide Kashmir from India.)” Abdullah has been under house arrest for the past six months.

The portion of his address where he accredits the statement to Abdullah can be watched below or here on PMO India’s Youtube channel.

This was also tweeted by the Bharatiya Janata Party from its official handle. It is noteworthy that after PM Modi’s speech, ex-chief ministers of J&K Omar Abdullah and Mehbooba Mufti were booked under the Public Security Act (PSA).

It would be amusing were it not worrisome that the prime minister quoted an article from a satirical website ‘Faking News’ in the Parliament. The website had published the exact quote on May 28, 2014.

Below is a screenshot of the satirical piece. 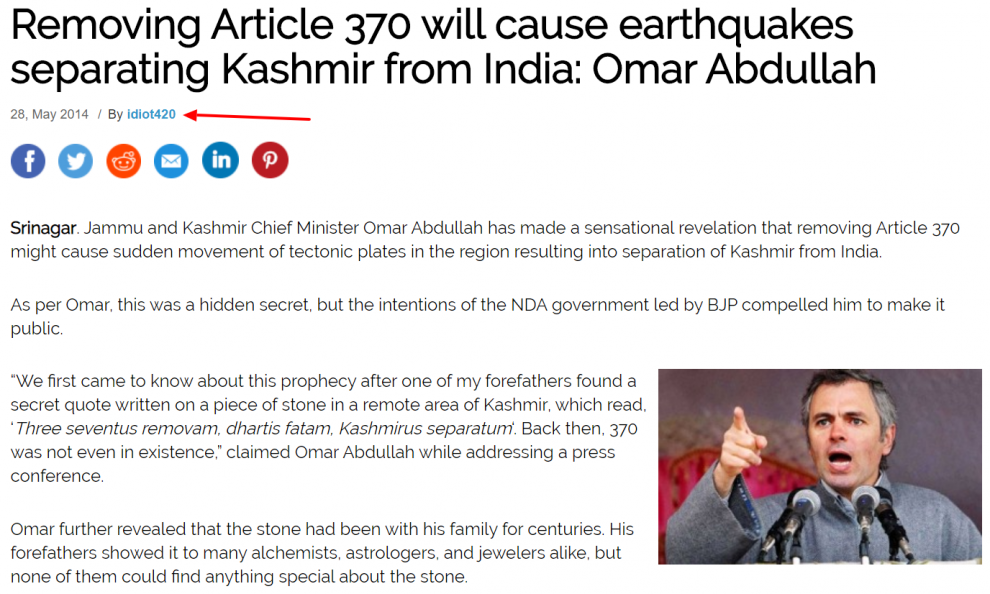 Abdullah had posted a tweet on Article 370 and the Modi government a day before this satirical piece was published. The tweet suggested that J&K won’t be a part of India if Article 370 ceases to exist. This is the closet quote we found compared to PM Modi’s statement. However, there is no mention of an ‘earthquake’ which appears only in the satirical article.

A quick Google search throws up no news reports where Abdullah has been quoted making the statement quoted by PM Modi. Furthermore, an advanced search on Twitter in both English and Hindi using keywords from the PM’s claim throws up references exclusively to the Faking News’ article and nothing else. It is unclear why and how the prime minister quoted a six-year-old satirical piece as genuine news in the Parliament.

Speaking with Alt News, national spokesperson of National Conference (NC) Imran Nabi said, “I don’t think he [Omar Abdullah] has ever made this statement. It seems that this has been picked up from the satirical website Faking News. The last tweet which was made by him spoke about keeping calm.”

The last tweet that went out from Abdullah’s account has been embedded below. It was shared on August 4, 2019.

Violence will only play in to the hands of those who do not have the best interests of the state in mind. This wasn’t the India J&K acceded to but I’m not quite ready to give up hope yet. Let calm heads prevail. God be with you all.