India Needs Action – and Not a Fast – From You, Prime Minister

The leaders of the government had no moral right to go on a fast to protest the chaos in parliament for which they too are equally responsible, if not more. 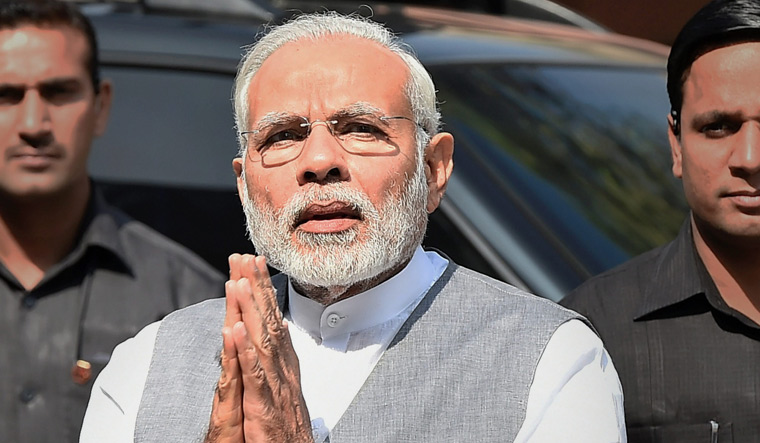 The Narendra Modi-led Bharatiya Janata Party went on a day-long nationwide fast to protest against the washout of the recent parliament session. The BJP had earlier also announced that National Democratic Alliance MPs would forego their salaries, along with allowances, for 23 days due to the washout of the second half of the budget session. But such symbolic gestures cannot absolve the government and the ruling party of their responsibility in ensuring that parliament functions productively.

According to PRS legislative, a research initiative that tracks parliament’s work, this budget session was the least productive since 2000. The two houses also spent the least amount of time debating the budget since 2000.

The government is responsible for the smooth functioning of the house. The ruling party has a full majority. As per the constitution and parliamentary procedures, the house has full powers to take action against any member to ensure order in the house.

M.N. Kaul and S.L. Shakdher in Practice and Procedure of Parliament said, “It is the responsibility of the Speaker to maintain order in house and for this purpose, he or she exercises all powers necessary for enforcing his/her decision”. This book is considered the Bible for parliamentary procedures, and even presiding officers consult it. Are the prime minister, the BJP president and other leaders protesting against the speaker’s failure to discharge this constitutional responsibility, despite having all the powers to regulate the proceedings of the house and maintain order?

As per the constitution, even the courts have no jurisdiction to interfere in any way with the control of the house over its internal proceedings or call into question the validity of its proceedings on the ground of any alleged irregularity or procedure.

The Supreme court in Raja Ram Pal vs The Hon’ble Speaker, Lok Sabha and others, 2007 had even upheld the power of parliament to expel a member to maintain order in the house. The NDA, which has the majority in the house, failed miserably in ensuring smooth functioning. The prime minister, being the leader of the house, has the foremost responsibility to ensure that parliament functions properly. Precisely for this reason, parliament is vested with unassailable powers to regulate itself. The NDA government had no problem in getting the budget passed in parliament without any debate or discussion. Debate and discussion were also missing on the no-confidence motion.

Thus, subject to the provisions of the constitution, parliament and state legislatures can regulate their own procedures. In Shrikishen vs state of Hyderabad, 1956, the Hyderabad high court said that the presiding officer of parliament is not subject to the jurisdiction of the courts in exercise of those powers. Similarly, the Allahabad high court in Raj Narain Singh vs Govind Kher, 1953, said that the courts have no jurisdiction to issue a writ, direction or order relating to a matter in respect of what is done in the house or which affects the internal affairs of the house.

The no-confidence motion is the most important of parliamentary motions, as the survival of the government depends upon its outcome. Therefore, it is the responsibility of the house to ensure that the motion is taken up. There is a clearly laid down parliamentary procedure to deal with grave obstructions in the house.

Rule 374A of the Rules of Procedure and Conduct of Business in Lok Sabha, which came into effect on December 5, 2001, states that in the event of grave disorder occasioned by a member coming into the well of the house or abusing the rules of the house persistently and wilfully obstructing its business by shouting slogans or otherwise, such members shall, on being named by the speaker, stand automatically suspended from the service of the house for five consecutive sittings or the remainder of the session, whichever is less. This rule primarily aims at doing away with the requirement of moving a motion and its adoption for securing suspension of a member from the service of the house. Under this rule, merely naming of the member by the speaker is enough to secure his or her suspension.

Interestingly, this rule was incorporated into the rules of procedure of parliament during the first NDA regime. But now there is no effort to enforce this rule.

The question now is why this rule was not invoked, to ensure that the no-confidence motion is taken up. Should we blame only the erring members, when the rules of parliament allow for remedial action to deal with such errant behaviour? If a law is violated, not just the person who did so, but even the law enforcement authority that fails to take action on those who violated the law is accountable. Thus, the prime minister’s fast was not just an indictment of the opposition responsible for the din in the house, but also the presiding officer for not enforcing the rules.

The Central government’s failure to accord special status to Andhra Pradesh, as per its own promise, and the intransigence of the Modi government in implementing the apex court’s order to set up a Cauvery Management Board were the reasons for trouble in the house. The effect was the disorder. The cause was the government’s apathy. The leaders of the government had no moral right to go on a fast for something for which they too are equally responsible, if not more.

Besides, consider that the AIADMK refused to support the no-confidence motion – this reflected solidarity with the BJP. The disorder only helped the ruling NDA to escape from parliamentary scrutiny through the no-trust motion. This is that much more inexcusable, as there never was a threat to the government that enjoys a comfortable majority in the house.

K. Nageshwar is a former Telangana MLC, former editor of The Hans India and professor of journalism at Osmania University.