The silence of the top leaders of the saffron party, including that of the prime minister, indicates their complicity.

AIMIM's Asaddudin Owaisi faced jeers as he walked down to the well of the house to take his oath on Tuesday. Photo: Lok Sabha TV/Twitter

New Delhi: If you thought that BJP’s victory processions were over, you would be wrong.

In the first two days of the 17th Lok Sabha, the newly-elected BJP legislators decided to show-off their brute majority by heckling the opposition – especially the Muslim MPs.

A large section of BJP MPs interrupted oath-taking of several MPs from opposition parties with loud chants of “Jai Shri Ram”, “Bharat Mata Ki Jai” and “Vande Mataram” – popular slogans which have been appropriated by the saffron party in recent times.

Light banter between political parties has long existed in parliament. But the manner with which BJP legislators jeered the opposition MPs on June 18 as they came forward to take their oath was nothing short of intimidation.

What is surprising is that the cavalier way in which the BJP legislators treated the oath-taking ceremony came only a day after the prime minister Narendra Modi assured opposition parties that despite their low numbers in the Lok Sabha, their views would matter.

Underlining the significance of an active opposition in a parliamentary democracy, Modi had said, “When we come to parliament, we should forget ‘paksh‘ (treasury) and ‘vipaksh‘ (opposition). We should think about issues with a ‘nishpaksh‘ (impartial) spirit and work in the larger interest of the nation.”

“The role of an opposition and active opposition is the important prerequisite in a parliamentary democracy. The opposition need not bother about their numbers. I hope they speak actively and participate in house proceedings…their every word…every feeling is valuable to us,” Modi emphasised on the first day of parliament on June 17.

However, the conduct of the BJP MPs indicated that they paid little regard to the prime minister words.

Was Modi serious about what he said about the opposition’s role in the 17th Lok Sabha? On many occasions in the past – be it repeated lynchings of Muslim men or Dalit youth – Modi’s words and actions have been out of sync. While in his message he talks about inclusiveness, his supporters and BJP’s cadre have acted the other way. More often than not, the vocal prime minister has chosen to remain silent.

What happened on June 18 is the latest case in point.

BJP members greeted MPs like Sonia Gandhi of the Congress, Asaddudin Owaisi of the All India Majlis-e-Ittehadul Muslimeen, Shafiqur Rahman Barq and S.T. Hassan of the Samajwadi Party, almost every member of Trinamool Congress, and some DMK MPs, with loud slogans – leading to a commotion in the house.

Aditya Menon of The Quint writes, “Slogans differed with the MPs. The BJP MPs shouted “Jai Shri Ram throughput the oath-taking of West Bengal MPs, in concord with the Party’s use of the slogan against CM Mamata Banerjee. On the other hand when Sonia Gandhi, Owaisi, Azam Khan and Barq were about to take their oath, the slogans chanted were “Bharat Mata ki Jai” and “Vande Mataram”.

There was clearly a pattern in the way the BJP MPs taunted the opposition MPs and in that they attacked the Muslim MPs with slogans that seemingly questioned their loyalty to India – “a clear act of provocation”, Menon says.

While Rahul Gandhi was spared, his mother Sonia had to face this taunt from a BJP MP, “Thank you for taking your oath in Hindi” – a clear dig at her Italian origin yet again. 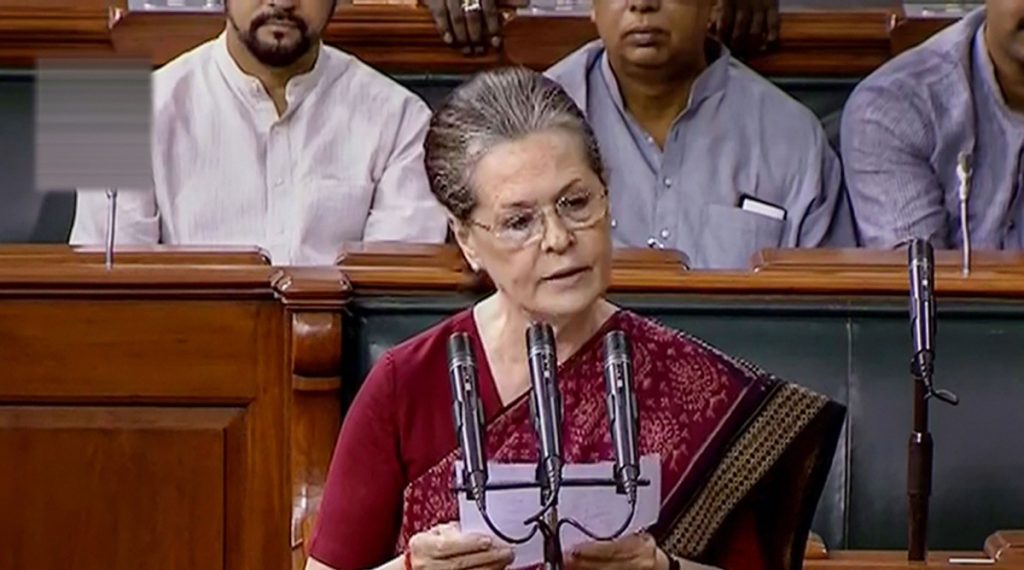 The Opposition MPs hit back

When the pro-tem speaker Virendra Kumar failed to control the commotion, opposition MPs came up with their own way of getting back at the treasury benches.

SP’s Barq finished his oath by saying, “Constitution Zindabad but I won’t say Vande Mataram as it is un-Islamic.” His colleague from Uttar Pradesh Hassan finished with “Hindustan Zindabad”.

Kakoli Ghosh Dastidar of TMC responded to the heckling by chanting “Jai Maa Kaali” – an alternative tantric cult practiced within the Hindu faith as opposed to Vaishnavism of which Ram is an integral part.

Most of them raised slogans of “Jai Hind, Jai Bangla” in their response. Banerjee slipped in his response before taking his oath, “Thank you for such a welcome, it seems I am more popular than PM Narendra Modi in the house.”

TMC MP Kalyan Banerjee went a step further to chant a Sanskrit shloka in honour Goddess Kali, much to the bewilderment of BJP MPs.

MPs like Khalilur Rehman and Abu Taher Khan refused to budge and started their speeches with “Bismillah-i-Rehman-Rahim” and ended with “Jai Hind, Jai Bangla, Khuda Hafiz”.

What went unnoticed from the glare of the mainstream media is that many senior leaders of the BJP, including Union minister Rajnath Singh and Ravi Shankar Prasad, who were present in the house, did not do anything to stop the BJP MPs from maintaining the dignity of the house.

The only noticeable exception in the BJP ranks was the first-time MP G. Kishan Reddy from Secunderabad, Telangana. Reddy was occasionally seen attempting to control the hecklers.

The brazen majoritarian bullying that happened on June 18 on the floor of the house is unlikely to be forgotten, considering a government that was re-elected with the promise of “Sabka Saath, Sabka Vikaas” did a sharp u-turn on the very first day of its parliamentary functioning by insulting the conventions and rules of the parliament.

The targeting of opposition leaders on the basis of their immediate identities also makes clear once again that the polarising campaign on which the BJP thrives will not be limited to only the election fields but inside parliament too.

A contrast to BJP MPs

A different example was also set in the parliament on June 18 when opposition MPs from Kerala gave a lesson in best parliamentary practices. They referred to the rule book to interrupt the oath-taking of Pragya Singh Thakur, the MP from Bhopal. Thakur had attempted to add her guru’s name – Swami Purna Chetnanand Avdheshanand Giri – as a suffix to her name during her oath-taking.

This is when Congress MPs Rajmohan Unnithan, Hibi Eden, T.N. Prathapan, Dean Kuriakose and Benny Behanan and Revolutionary Socialist Party’s N.K. Premachandran objected and raised the matter with the pro-tem speaker. Premachandran pointed out parliamentary rules to show that the suffixed name cannot go on record in any candidate’s oath-taking.

This forced the pro-tem speaker to rule that only the name written in her election certificate issued by the returning officer would go on record, forcing Thakur to read her oath again.

Even as the Kerala MPs pointed out rules to argue in the Lok Sabha, the BJP MPs could only taunt them with slogans of “Bharat Mata Ki Jai” and “Jai Shri Ram”.

Make no mistake – the silence of the top leaders of the saffron party, including that of the prime minister, on June 18 indicates complicity, nothing else.