In Life, and in Death, Gauri Lankesh and Sabeen Mahmud Battled Powers Fearful of Change

At the heart of the work of both the Kannada journalist and the Pakistani human rights activist was a desire to eradicate class and caste divides. 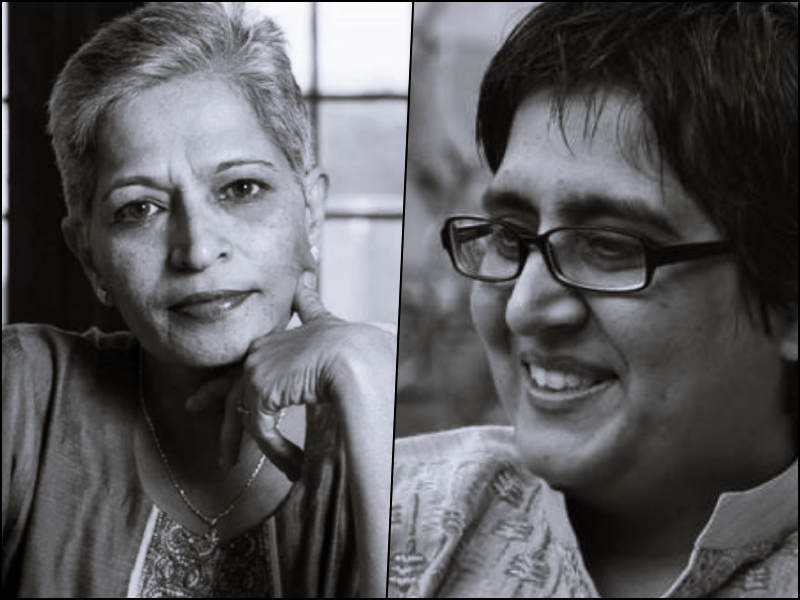 The young rights activist and founder of The Second Floor (T2F), the ground-breaking café-bookshop-art gallery and discussion-space in my hometown Karachi.

On April 24, 2015, driving home after an event at T2F, as she stopped at a red light, a motorcyclist pulled up next to her car. He aimed a pistol and fired at her, killing her instantly.

Her death was a personal blow. I had known her since her teens and worked closely with her on many occasions. I didn’t know Gauri Lankesh but her death feels personal too. Many of my fellow journalists and activists in India loved and respected her. I join them in grieving her loss and celebrating her life. 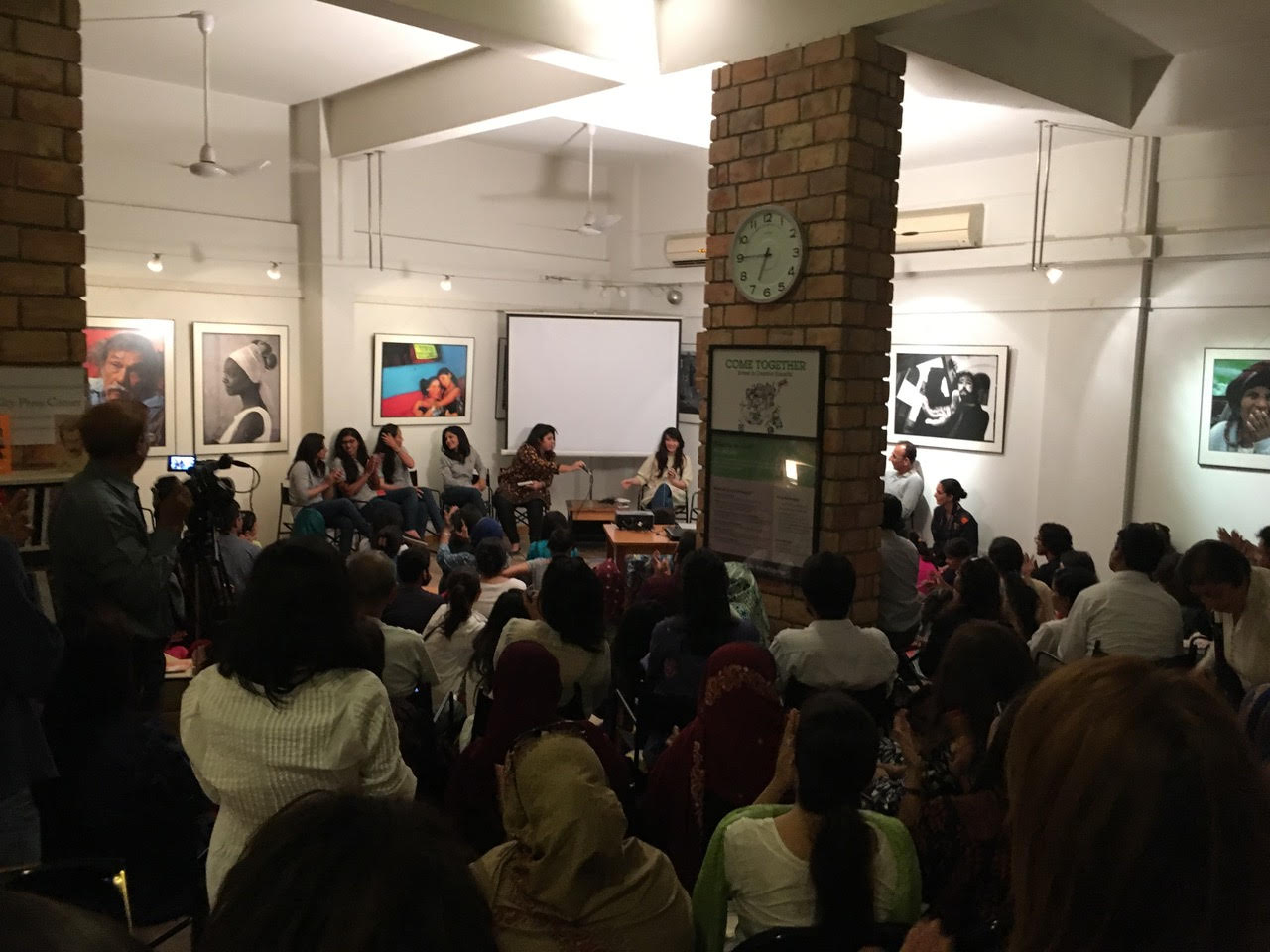 Beyond the personal sense of loss is the larger political loss dealt by these cold-blooded murders. Mahmud and Lankesh were courageous, irreverent, audacious, fiercely independent, fundamentally decent women. Armed with their words and passion, they used all their resources to stand up for the rights of the dispossessed and give platforms to countless others upholding justice, equality and basic human rights.

The criminals who planned and carried out these killings deserve the utmost contempt for their cowardly acts.

Everyone was welcome at T2F, located in a bustling commercial area. Innately inclusive, Mahmud refused to post security guards at the door. T2F regulars included “English medium types” – graduates of English-language schools, privileged by being fluent in the language of power – but the number of “Urdu medium types” was growing and there was a rich interaction that bridged conventional social divides. Anyone could voice opinions, ask questions and engage in discussions here without being made to feel inferior in any way. T2F was and remains a symbol of aspirations for an egalitarian, class-less society.

The menace of threats did not deter Mahmud from difficult topics like the “blasphemy” laws, militancy and Balochistan. The last discussion she organised, despite threats, was on Balochistan. The killer struck shortly afterwards.

To their credit, faculty and students at Karachi University went ahead with their planned discussion on Baloch missing persons barely two weeks after Mahmud’s murder, despite the university administration banning the event and locking them out of the venue. They dedicated the event to Mahmud. But the human rights violations in Balochistan barely make it to the mainstream media now.

Lankesh gave a platform to democratic aspirations in a language that reached the masses through her weekly Kannada tabloid Gauri Lankesh Patrike, and Lankesh Publications.

Delhi-based journalist Rana Ayyub reveals that Lankesh was the first person to reach out to her in June 2016 after Ayyub self-published her book Gujarat Files about the roles played by Narendra Modi and Amit Shah in the 2002 Gujarat carnage. Lankesh was in the process of translating the expose into Kannada and publishing it when she was killed.

Lankesh’s latest adopted son was Kanhaiya Kumar, “the JNU bloke” to quote her ex-husband Chidanand Rajghatta. Kumar and other students whom Lankesh mentored are part of the younger generation carrying forward the aspirations that those who hate change abhor.

Their work goes to the heart of what Lankesh and Mahmud epitomised and worked for: eradicating class and caste divides. They represent, as the social activist and former IAS officer Harsh Mander has highlighted, “youth, idealism, equality, solidarity”.

Often hailing from disadvantaged backgrounds, they are crossing all kinds of borders and barriers. Hindu, Dalit, Muslim, or tribal, these young people take up cudgels on behalf of communities other than their “own” – like Lankesh, Mahmud, or Mander himself. Lankesh, in her last social media posts, had highlighted the plight of the Rohingya Muslims who are being rendered stateless and stripped of any citizenship even as they are being massacred in Myanmar.

Mander is currently leading a Karwan-e-Mohabbat (peace yatra) across India, an attempt to fight hate with love, visiting those who lost their loved ones to hate crimes and targeted killings, and the lynchings that are, as he notes, “fast growing into a national epidemic.”

Karwan-e-Mohabbat started from Nellie, Assam, on September 4 – the site in 1983 of one of India’s most brutal post-Partition massacres. No one was punished or tried for the mass crimes that claimed, according to even conservative estimates, over 2,000 lives, including women and children.

On September 8, I participated in a vigil in the Boston area for Lankesh and the Rohingyas. The co-organisers were locally based progressive networks and non-profits – Free Saibaba Coalition-US, Alliance for a Secular and Democratic South Asia, Coalition for a Democratic India and the virtual South Asia Center.

Speakers at the gathering at Harvard Square contextualised the murder of Lankesh and the massacre of the Rohingyas, drawing the big socio-political and economic picture. The suppression of dissent in India resonates across borders in the region – Pakistan, Bangladesh, Nepal and Sri Lanka – and beyond, to Myanmar, the US and China. There are identifiable patterns in the suppression of people’s struggles in all these areas and elsewhere, in the rise of fascist forces hand-in-glove with expansionism and growing corporatisation. 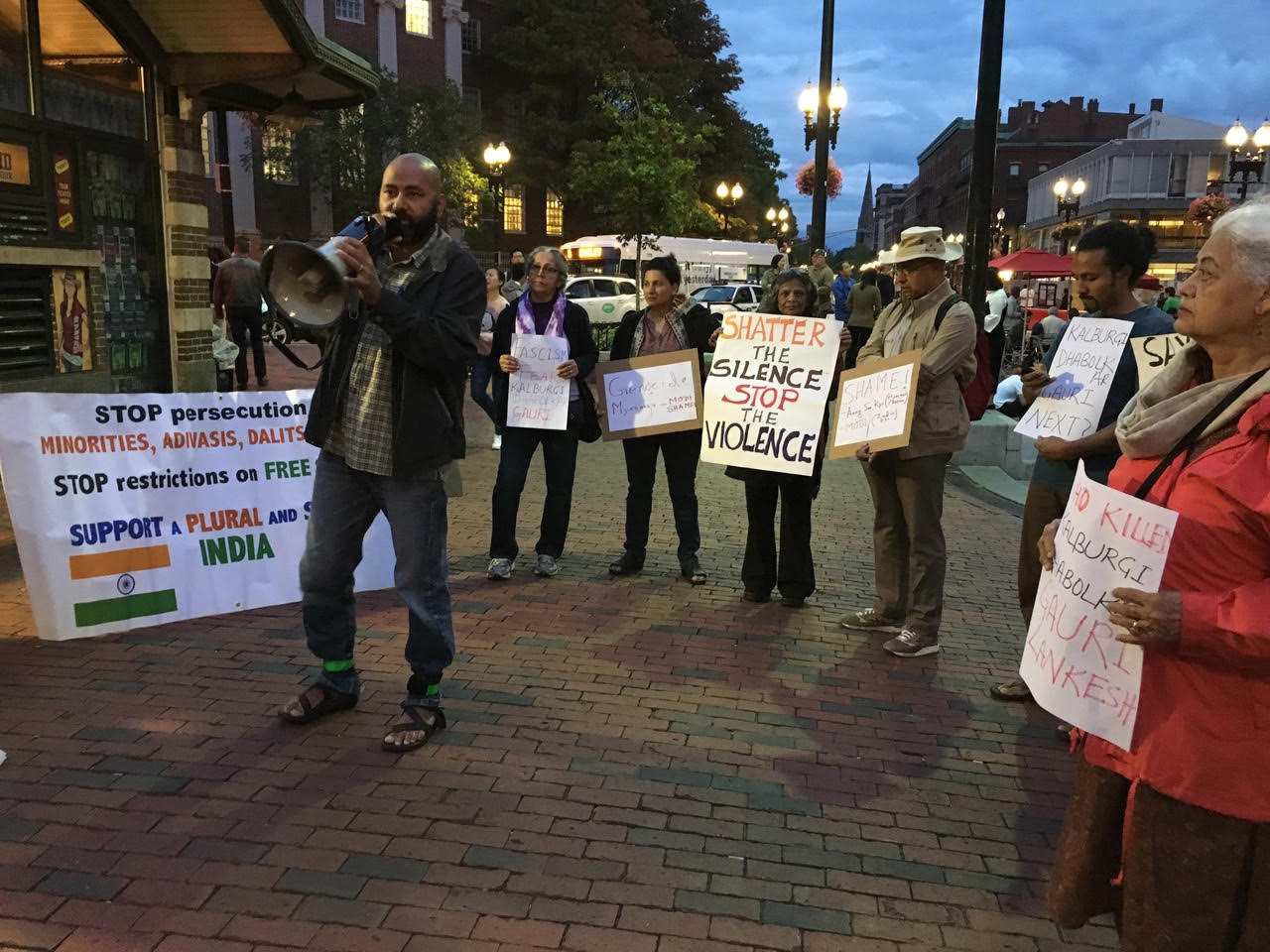 The attacks on Myanmar’s Rohingya people, Indian Prime Minister Modi’s tacit support of these attacks, Indian expansionism, Chinese growth and US imperialism and the move everywhere to displace indigenous people to take over their land and resources are all inter-connected.

People’s struggles in our own countries resonate with those elsewhere. The ongoing imprisonment of professor Saibaba in India who stands with indigenous people, Dalits and Adivasis has echoes in the imprisonment in Pakistan of the political activist Baba Jan of Hunza.

Pakistan has no official caste system but the way extremists wield the ‘blasphemy’ law to oppress religious minorities resonates in how Hindutva forces are using the beef ban.

The Pakistani Christian Asia Bibi languishes in a death cell, accused of ‘blasphemy following an altercation with a group of Muslim women after she supposedly defiled their drinking water. This has nothing to do with religion and everything to with exploiting social divisions for political power. The forces of the ‘religious right’ know that they can use the tool of religious sensitivities to rally support to stay politically relevant. They exploit religious beliefs to incite mobs to attack, burn and kill individuals or communities accused of such violations. We are seeing this happen in India also.

Behind these attacks lies fear. Fear of change. Fear of the rise of ‘lower caste’ communities. As a Punjabi Christian (most being descendants of low-caste Hindu converts), Asia Bibi belongs to the lowest social strata in her society, yet her children were going to the same schools as those of the majority Muslim community.

Similarly, the Christian couple Shama and Shahzad, lynched after ‘blasphemy’ accusations, were breaking out of the socio-economic constraints they were born into.

The Dalit student Rohith Vemula was working towards his PhD. Lankesh used Vemula’s smiling face as her Facebook profile picture emblazoned with the words “PUNISH THE CULPRITS”.

Filmmaker Rakesh Sharma’s searing poem, written in a spontaneous outpouring of grief and defiance shortly after Lankesh’s murder and posted to his Facebook page, speaks for me and many others today:

I do not wish to say RIP #GauriLankesh

May your soul haunt us all
Shake us up deep within
Making many, many more speak out
Resist and fight their poison

How many can they kill?

And even if they do,
Even if the body becomes lifeless,
Can they ever crush our spirit
Or kill our ideas and dreams.

Can we not tell them instead –
We are coming for you
Not just you personally
But what you stand & wish for
That we will fight you and your ideas
On the streets and
In our public spaces
Our offices and schools
Our colleges and universities
Our buildings and housing societies
Our local neighbourhoods…
Everywhere.
Anywhere.

Is it not time to say
Enough is enough
We will not allow you anymore
To spread your venom
Or poison more minds
Nor let you intimidate us into silence
Or feel the fear you want us to feel
That till we drive you to the ground
We will not rest in peace
Nor will Gauri
#Dhabolkar
#Kalburgi
#Pansare
Or anyone else you kill.

A spoke in the wheel of this “intellecticide” is the ‘anti-intellectual’ nature of the vote for Donald Trump who shares a host of similarities with Modi in India despite differences. The rise of white supremacy in a nation of migrants built after virtually annihilating indigenous populations is a continuation of ongoing racism in the US.

The pendulum swings of history ushers in periods of the rise of the ‘Right’ or the ‘Left’. We are witnessing the rise of the militant Right at this moment with its ensuing bloodshed in India, Pakistan, the US and elsewhere.

But what will continue to rise inexorably, despite bloodshed along the way, are human aspirations to basic rights, equality and justice. There is no going back, no matter how fiercely the chaddis, topis or kluxies fight it.

Beena Sarwar is a journalist, peace activist and journalism teacher. Her blog is www.beenasarwar.com and she tweets @beenasarwar.