The withdrawal of the April 29 tweet by the army could mean the two power centres in Pakistan have arrived at a settlement. 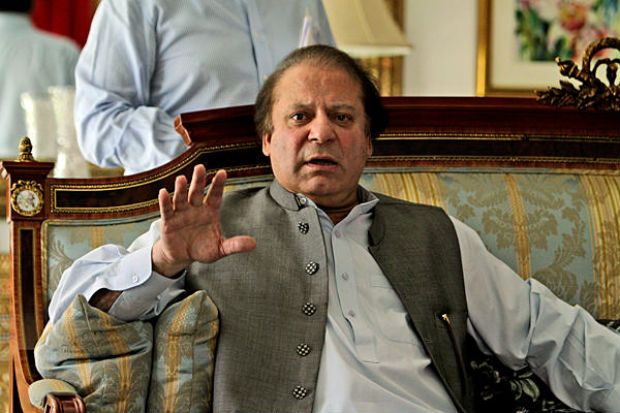 Islamabad: The Pakistan army today withdrew a controversial tweet that had rattled the Nawaz Sharif government, about a media leak about a rift between the two power centres over fighting militancy in the country.

The army, which enjoys considerable influence over policy decisions in Pakistan, had on April 29 in a tweet “rejected” a notification by the Sharif government stating that he had sacked his top aide and special assistant on foreign affairs, Tariq Fatemi.

Fatemi was dismissed for his alleged role in leaking details of a high-level meeting during which the civilian leadership reportedly confronted the army over their alleged reluctance to combat militancy in Pakistan.

The episode later came to be known as the “Dawn leaks”, after the name of the daily that reported it.

Today, the Inter-Services Public Relations (ISPR), the media wing of the army, said that the “tweet on April 29, 2017 was not aimed at any government office or person.”

“Recommendations, as contained in Para 18 of the Inquiry Committee Report, duly approved by the prime minister, have been implemented, which has settled the Dawn leaks issue,” it said. “Accordingly, ISPR’s said Twitter post stands withdrawn and has become infructuous. Pakistan Army reiterates its firm commitment and continued resolve to uphold the Constitution of the Islamic Republic of Pakistan and support the democratic process.”

The withdrawal of the April 29 tweet by the army could mean the two power centres have arrived at a settlement on the issue, that had also led to action being taken against Rao Tehsin Ali, the principal information officer of the Ministry of Information.

Earlier the army had demanded the full implementation of recommendations by a committee which investigated the news story published last October.

Following the ISPR statement today, a document issued by Pakistan’s Ministry of Interior said, “Since action on orders of the prime minister has already been completed by the respective ministries and divisions, the issue of Dawn Leads [sic] stands settled.”

The latest disagreement between the civilian and military leaderships dates back to October 6, when the Dawn newspaper in a front-page report claimed that the civilian authorities have warned the Inter-Service Intelligence spy agency to act against militants or face international isolation.

The rift was a grim reminder of 1999, when then army chief Pervez Musharraf had ousted the government of Sharif.

Also today, chief of army staff General Qamar Javed Bajwa held a meeting with Sharif in Islamabad on the issue.

According to a prime minister’s house spokesperson, the meeting was held in a “cordial atmosphere” and both sides agreed to “amicably resolve the matter”. ISI chief Lieutenant General Naveed Mukhtar was also present during the meeting.

Interior minister Chaudhry Nisar Ali Khan is believed to have played a role in arranging the meeting which led to army taking back its tweet.

Later, ISPR spokesman Major General Asif Ghafoor told reporters that the issue has been resolved as all recommendations of the probe committee have been implemented.

According to the interior ministry, the committee had recommended that the role of Dawn newspaper, its editor Zafar Abbas and the reporter behind the story Cyrill Almeida may be referred to All Pakistan Newspapers Society, with a direction to take disciplinary actions against them.