Over Twitter and Fax, An Impossible Alliance is Born – And Swiftly Attacked

The BJP’s bitter comments about “a combination of terror-friendly parties” will only deepen the camaraderie within a formerly divided opposition.

New Delhi: Between Twitter and a fax machine, another seemingly impossible alliance has been announced – between the People’s Democratic Party (PDP) and the National Conference (NC) in Jammu and Kashmir.

The state now joins an expanding list of large states where opposition parties, despite bitter differences, have united against the BJP – a foretaste of the ‘mahagathbandhan’ that will be required to challenge the BJP in next year’s general election.

In September, the Congress and Telugu Desam Party agreed to contest the Telangana assembly polls together – settling a bloody rivalry, and lighting a way forward for the two dominant parties to share seats in Andhra.

In March, the Samajwadi Party and the Bahujan Samajwadi Party – representing battling middle- and lower-caste groups in Uttar Pradesh – set their own joint plans for 2019 in motion.

In Karnataka, the Congress and Janata Dal (Secular) failed to coordinate before the polls, and instead pulled together a hair’s-breadth alliance majority just as the alternative became clear.

In J&K, the last forty-eight hours have unfolded like a thriller, with the Centre and state’s political parties trying to outmanoeuvre each other by the minute.

The PDP and the NC, arch-rivals in the state, came together on Tuesday evening to stake a claim to form the government, five months after the previous coalition fell apart. They had the backing of the Congress and the CPI(M), forming either a wide anti-BJP umbrella or – as governor Satya Pal Malik described it – an “unholy alliance”.

Also read: To Unseat Modi, Congress Must Work Around Priorities of Regional Parties

PDP leader and former chief minister Mehbooba Mufti said she had a collective strength of 56 MLAs in the 87-member house. Minutes after Mufti sent a fax to the governor claiming the majority, Sajjad Lone of People’s Conference, which has only two MLAs, staked his own claim.

(He said he had the backing of 25 BJP legislators and 18 unnamed others – presumed to be MLAs whose defections would be engineered by the Centre.)

Mufti, in a tweet, claimed that the governor said he did not receive any fax as his office was shut on Milad-un-Nabi, a public holiday.

(Sajjad Lone went high-tech, and WhatsApped the governor his claim of support.)

PS – In todays age of technology, it is very strange that the fax machine at HE Governor’s residence didn’t receive our fax but swiftly issued one regarding the assembly dissolution. 4/4

Others also pointed out how on a public holiday, when the governor could not receive the fax, he could swiftly recommend the dissolution of the assembly and the Centre swiftly moved to accept his recommendation.

Oh. But the office magically opened on Eid to send a recommendation to centre for dissolving the assembly and then for notifying its dissolution. Badhiya hai. https://t.co/BtmV4j7Pf0

Within minutes, Malik – who had only recently said he had no plans to dissolve the assembly – moved to do just that. To justify his decision, he said that the alliance between two ideological rivals could lead to further instability in the state.

While rising to protest the governor’s decision, Mufti and NC chief Omar Abdullah made time for a blushing display of reconciliation and warm feelings on Twitter.

And I never thought I’d be retweeting anything you said while agreeing with you. Politics truly is a strange world. Good luck for the battle ahead. Once again the wisdom of the people will prevail. https://t.co/OcN9uRje1s

Mufti thanked Abdullah and Congress’s Ambika Soni who helped build their consensus. Mufti earlier claimed that it was the “idea of a grand coalition” that gave the BJP “jitters”. 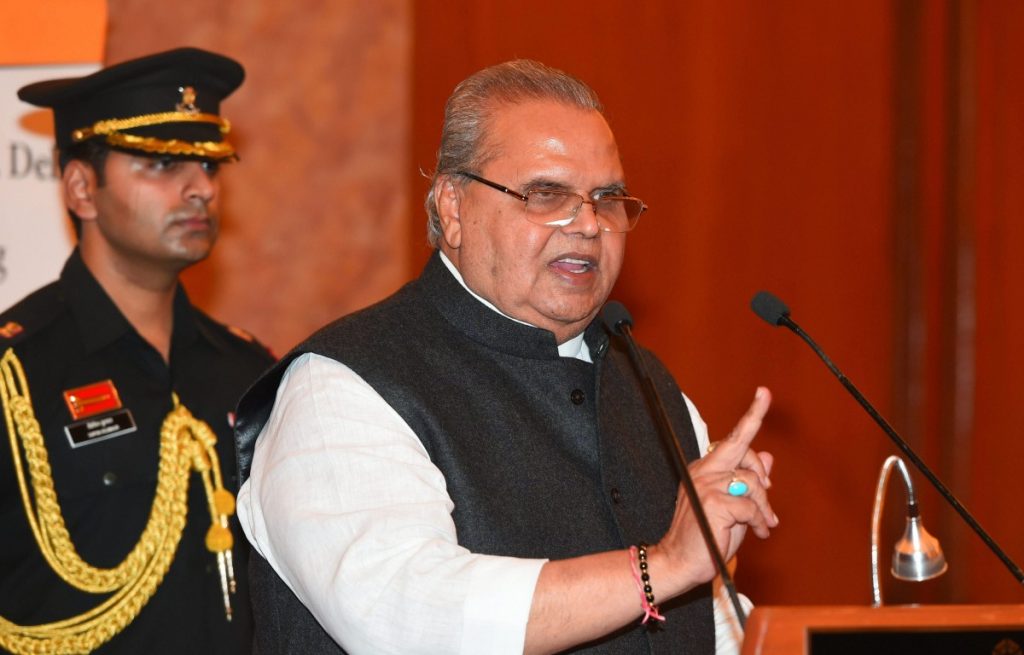 The Centre’s gambit prevailed – Jammu and Kashmir will now head to another midterm election, perhaps, simultaneously with the general election. It was followed by acidic comments from the national ruling party. The official handle of the BJP called the new alliance “a combination of terror-friendly parties”, and on Thursday, BJP general secretary Ram Madhav said they were acting on “instructions from across the border.”

Just take it in your stride @OmarAbdullah Not questioning your patriotism at all. But d sudden love between NC n PDP n d hurry to form government leads to many suspicions n political comments. Not to offend u. https://t.co/4tgbWS7Q3r

It is a conditioned reflex of the BJP to accuse any rival formation of being ‘anti-national’. In this situation, however, cheap shots will only seal the camaraderie between the PDP and NC.

They confirm that the BJP views opposition parties as acceptable only as long as they are useful – after which point, they can be attacked and even criminalised.

Last week, N. Chandrababu Naidu withdrew permission for the CBI to initiate new investigations in Andhra, fearing that the BJP (until recently an ally) would now deploy the agency to undermine his government.

Also read: Lessons for Narendra Modi from the History of Jammu and Kashmir

There, as in Jammu and Kashmir, the BJP’s apparent hostile intentions will only encourage new alliances that are practically unbeatable.

It’s widely understood that the BJP, despite waning popularity, is in a strong position to win next year’s election if the opposition holds onto the same cards as it did 2014. A broad pre-poll alliance, with well-planned seat sharing, could turn the tables. But this will require a level of coalition diplomacy that is the real test, more than the actual campaign, of Congress president Rahul Gandhi’s mettle.

For now, the reminder that anything is possible – and that even the most implacable political rivals can fall into each other’s arms – should give new confidence to the opposition.