Who Is Running the 'Orchestrated Wine And Cheese Campaign' Against Aadhaar in the SC?

Defenders of Aadhaar have called opposition to it an organised campaign stemming from paranoia. But a look at the petitioners proves it is anything but. 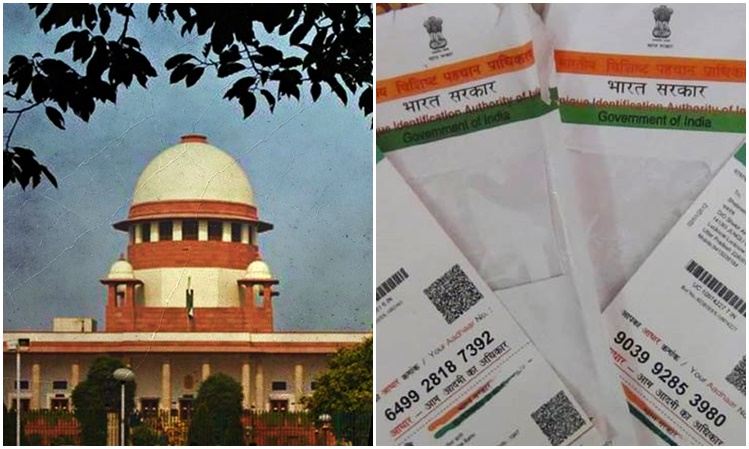 One cannot confirm if any of these petitioners, who have all submitted bulky petitions, do in fact drink wine or/and eat cheese. Credit: File photo

And in an interview with The Wire last year, former Attorney General Mukul Rohatgi said, “This paranoia is coming from a few people in a country of 150 crore.”

Nilekani, the architect of the Aadhaar project, has also spoken at length in reference to a major story in The Tribune that took on global resonance on how India’s entire Aadhaar database is being breached and leaked through various vendors.

Among the more prominent faces at the helm of the fight is one Padma Shri awardee, three Ramon Magsaysay awardees, three former Indian army personnel, a retired high court judge, a parliamentarian and the entire government of West Bengal.

And yet who are these people who apparently “drink wine, eat cheese”, and also make a commitment to the Supreme Court to spend money and time (over six years for some), only to spite Nilekani’s Aadhaar project?

A look at the 30 challenges filed before the Supreme Court and the people behind them casts doubts on the accusations that the ‘wine and cheese’ lot have no understanding of base realities.

In fact, by simply looking at the various sections of society those opposed to the project belong to, it becomes clear that this isn’t an organised and ‘orchestrated’ campaign, but a motley bunch of individuals who have been tagged together by the Supreme Court on a now bloated Aadhaar petition. The earliest petition (by retired Justice Puttaswamy) has been plodding along for six years, since 2012, and 11 others out of the 30, joined the fight the very next year.

Also read: Aadhaar Isn’t Just About Privacy. There Are 30 Challenges the Govt Is Facing in Supreme Court

One cannot confirm if any of these petitioners do in fact drink wine or/and eat cheese, but from reading their bulky submissions, they appear have committed themselves to a cause that they truly believe interferes with the lives of the Indian people.

Justice (retired) Puttaswamy: At 92, Puttaswamy is one of the oldest living petitioners in the Supreme Court, and the oldest petitioner in the Aadhaar case. He was born in 1926 and enrolled as an advocate in 1952. By 1977, he was appointed a judge of the Karnataka high court. His challenge, a path he put himself on in 2012, is the first challenge to the Aadhaar case. The now historic privacy judgement delivered in August 2017, takes its name from his challenge.

Bezwada Wilson: Wilson has been the driving force behind India’s efforts at providing dignity, security and emancipation to manual scavengers who risk their lives while cleaning drains and latrines. Manual scavengers, who largely belong to the ‘lower caste’ in India, face stigma and exclusion. Wilson is not new to long-fought and hard-won public interest litigations and has fought a case which led to the government to pass laws for the prohibition of the employment of manual scavengers. In 2016, he received the Ramon Magsaysay award.

Major General (retired) SG Vombatkere: Vombatkere retired as a major general of the Indian Army after 35 years of service. He is now over 70 was awarded the Visishta Seva Medal by the President of India in 1993. He is a key petitioner in this case along with Bezwada Wilson. Their submission says it is “wider” than Puttaswamy’s and calls for the Aadhaar Act to be declared a violation of Article 14, 19 and 21 of the Indian constitution and asks that no one be denied any service on account of Aadhaar. They have also asked the court to direct that all data collected under Aadhaar by the public and private sector be destroyed. They have challenged the National Population Register and Aadhaar’s link.

Shantha Sinha: Shantha Sinha was the first chairperson of the National Commission for Protection of Child Rights and served two consecutive terms (2007 to 2013). She has also been on various other government committees on national integration, right to education, mid-day meals and adult education. Her work on the ground in Andhra Pradesh was directed at rescuing children from child labour and admitting them to government schools. She also received the Ramon Magsaysay award in 2003 and the Padma Shri in 1998.

Kalyani Menon Sen: Sen is a feminist scholar and has been an activist for women’s rights for over 25 years. She has worked with the United Nations Development Programme, advising on gender related issues. Sinha and Sen are co-petitioners in their case. Some of their prayers are similar to Wilson’s and Vombatkere’s. They’ve also moved court seeking that “accounts of current bank account holder will not be made in-operational and future applicants will not be coerced to submit their Aadhaar numbers.” They’ve petitioned the court similarly for the government’s order on linking mobile numbers to Aadhaar.

Aruna Roy: Roy was briefly a bureaucrat in the Indian Administrative Service (1968 to 1975) but resigned and is now known for her nearly 40 years of work with the rural poor in Rajasthan and ‘Mazdoor Kisan Shakti Sangathan’ which she runs. She was also a key figure in the movement which led to India passing the Right to Information Act as well as the Right to Food. She was a member of the UPA’s National Advisory Council for five years and was instrumental in the passage of the Mahatma Gandhi National Rural Employment Guarantee scheme. Along with Wilson and Sinha, Roy has also received the Ramon Magsaysay award.

Nikhil Dey: Dey is a long-time colleague of Aruna Roy, a co-founder of the ‘Mazdoor Kisan Shakti Sangathan’ and a co-petitioner with her on this case. With Roy, he too has worked on the right to information, food and employment in India. Their petition saw every state and union territory of India being made a respondent. “The present experimentation would undoubtedly result in social exclusion by depriving persons of the fundamental rights and also putting at stake vast sums of tax payer’s money,” says their petition.

Major General (retired) SCN Jatar: Jatar served with the Indian Army from 1954. He commanded an engineer regiment in India’s 1971 war in the Poonch Sector (Jammu and Kashmir) and was the commander of infantry brigades in the Kashmir Valley and Rajasthan dessert, from 1977 to 1981. He has been appointed to several government committees and was also the Chairman at ONGC Videsh Limited and Oil India. His petition saw the Election Commission and Reserve Bank of India appear as respondents.

Colonel (retired) Mathew Thomas: Thomas, who is around 80, retired as Colonel from the Indian Army and has seen military action in Nagaland, China and Pakistan. In 2014, he was invited to address a BJP parliamentary panel, where he explained various issues around the Aadhaar scheme. He has asked the court to direct an investigation into the role of foreign and private companies in the collection of biometric data of Indians.

Supporting material in the form of research has been submitted to the court by Reetika Khera (professor at IIT Delhi), Jean Dreze (co-author with Amartya Sen of An Uncertain Glory: India and its Contradictions), Jude Terence D’souza (securities system specialist in Mumbai), Anand Venkatanarayanan (data security expert in Bangalore), Samir Kelekar (security consultant) and Anumeha Yadav (journalist, formerly at Scroll.in).