Opposition Rallies Against Lack of Discussions, 'Physical Violence' in Parliament

Not only were important issued not discussed, opposition leaders also said that women MPs were manhandled inside Parliament premises. 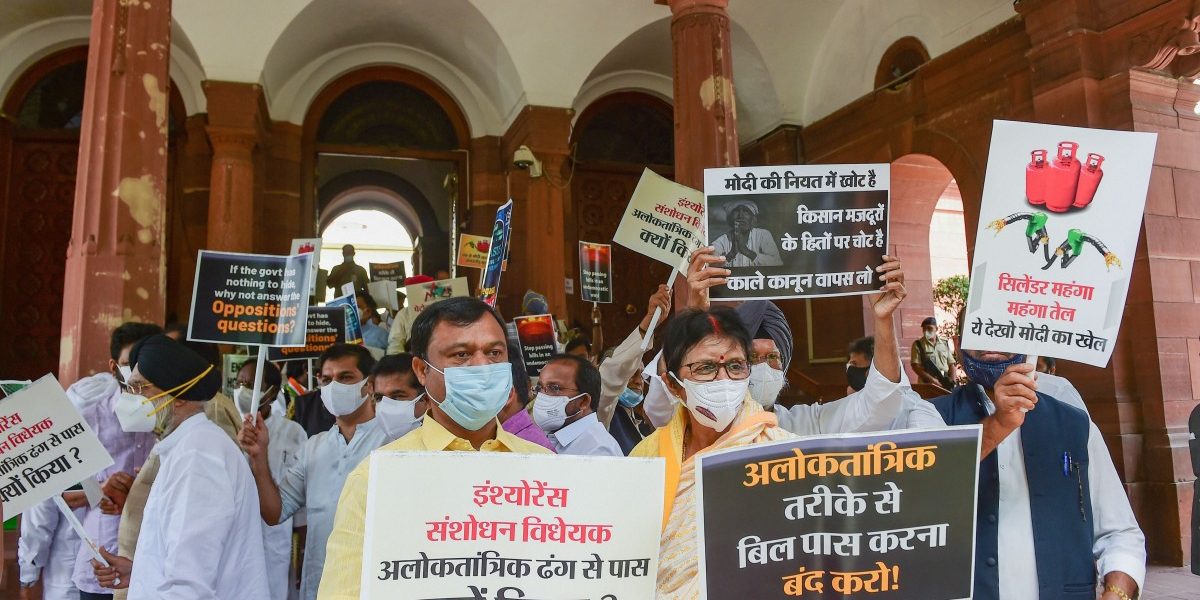 Opposition parties leaders display placards during a protest against the curtailment of the Monsoon Session of Parliament and other issues, in New Delhi, Thursday, Aug 12, 2021. Photo: PTI/Kamal Kishore

New Delhi: A day after both Houses of Parliament adjourned sine die, two days ahead of the scheduled end of the monsoon session, opposition leaders on Thursday took out a protest march from Parliament to Vijay Chowk. During the march, Congress leaders alleged that they were not allowed to speak in Parliament.

Elaborating on the Rajya Sabha incident, in which a scuffle had broken out between opposition MPs and marshals and following which some women MPs had alleged that they were manhandled by male marshals, Gandhi said: “This is the first time that MPs have been attacked in Parliament. Outsiders were brought in who thrashed the MPs. Even then, they talk about the chairman’s tears. The chairman’s job is to make the House run.”

Supporting the charge, Nationalist Congress Party leader Sharad Pawar said in the 55 years that he has seen Parliament, he has never seen women MPs being attacked in Rajya Sabha they way they were on Wednesday.

Sanjay Raut of the Shiv Sena too claimed that democracy was being murdered every day and said, “people from outside were brought into Parliament who wore marshal clothes and attacked women MPs.” Raut said to him it felt as if he was standing at the Pakistan border and not in Parliament.

A large number of Congress MPs also participated in the protest. Party MP Shashi Tharoor claimed that the Parliament proceedings did not run properly. He charged that the government passed laws without discussions and held that while there should have been discussions on COVID-19 vaccination, the current economic situation, unemployment and farm laws, the government was found “running away”.