Govt Has Abandoned Any Pretence of Being Democratic: Sonia Gandhi at Opposition Meet

Congress chief Sonia Gandhi chairs a meeting with leaders of the opposition via video conferencing, May 22, 2020. Photo: PTI

New Delhi: Twenty two opposition parties participated in a video conference meeting hosted by Congress president Sonia Gandhi on Friday. The Congress had invited all opposition parties on May 19 for a meeting to discuss the Union government’s handling of the coronavirus-induced lockdown, the migrant labour crisis, the freeze on all parliamentary activities and the steps taken to mitigate the labour crisis.

However, Aam Aadmi Party’s Arvind Kejriwal, Samajwadi Party’s Akhilesh Yadav, and Bahujan Samaj Party’s Mayawati declined the invitation, and decided to not attend the meeting that was being seen as an united effort by the opposition to check the Centre’s alleged unilateral decision-making process during the lockdown.

While Yadav has been one of the primary voices against Uttar Pradesh chief minister Adityanath’s apparent poor handling of the migrant labour crisis, sources said he made the tactical decision not to attend the meeting because of his party’s differences with the Congress in UP. The Congress, under the leadership of Priyanka Gandhi and its state unit president Ajay Kumar Lallu, have been looking to make headway in UP. The grand-old party garnered a lot of attention recently after it caught the chief minister off-guard by lining up around 1,000 buses to help the state government ferry stranded migrant workers.

Also Rrad: What Will Politics Look Like in the Post-Pandemic World?

Mayawati, on the other hand, has been relatively silent, making her presence felt through her occasional tweets against the Centre and Adityanath-led government. On a day when the opposition meeting was held, however, she also trained her guns on the Congress government in Rajasthan. She attacked the Ashok Gehlot-led government, which recently asked the UP government for reimbursement for the costs it incurred during arranging travel for stranded students in Kota.

The Delhi chief minister appears to be following an equidistant policy towards both the BJP and the Congress, much on the lines of Odisha’s Naveen Patnaik, as was manifest in the assembly elections held in February 2020. For the time being, it has decided not to be seen in any opposition forum led by the Congress.

Barring these few leaders, most opposition ranks joined hands to chalk out a united opposition strategy to check the Centre’s moves at a time when it is gradually opening up the country from the lockdown.

Congress president Sonia Gandhi did not mince words in her opening remarks. “The government has abandoned any pretence of being a democratic government. All power is now concentrated in one office, the PMO (Prime Minister’s Office). The spirit of federalism which is an integral part of our constitution is all but forgotten. There is no indication either if the two houses of parliament or the standing committees will be summoned to meet,” she said. 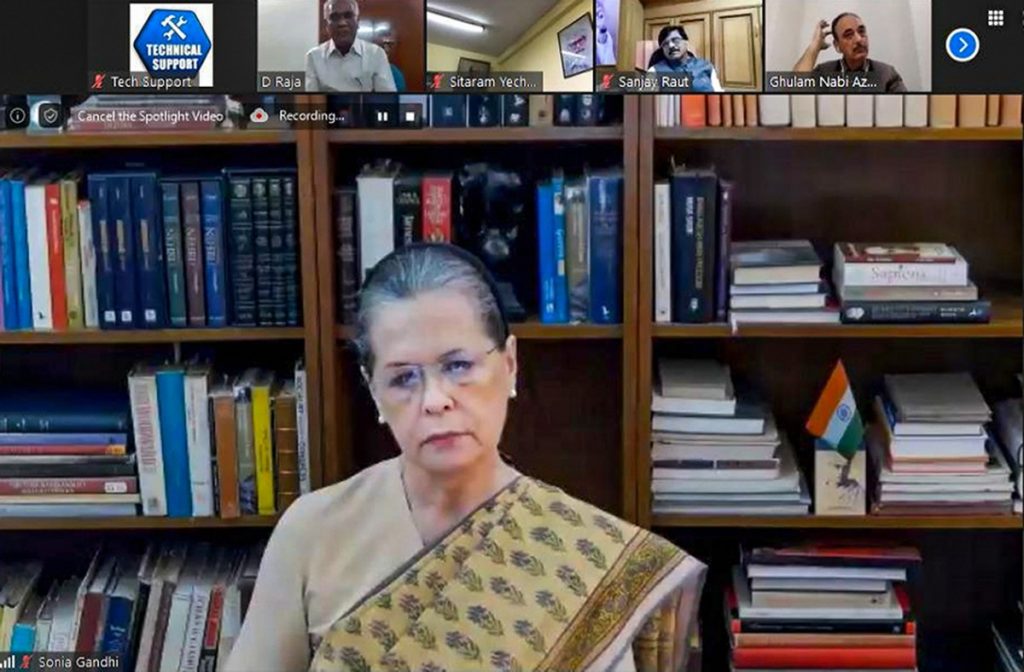 She also expressed her sorrow at the damage caused by Cyclone Amphan in West Bengal and Odisha.

Terming the Rs 20 lakh crore economic stimulus announced by the Union government as a “cruel joke on the country”, she said, “Many of us like-minded parties had demanded that cash must be transferred to the poor, that free grain must be distributed to all families, that buses and trains must be arranged for the migrant workers to go back to their homes. We emphasised that wage assistance and wage protection funds must be set up to protect the employees and the employers. Our pleas have fallen on deaf ears.”

“Far from offering succour and support, the government has embarked on a wild adventure of so-called reforms including a grand clearance sale of PSUs and repeal of labour laws. There is not even a pretence of consultation with stakeholders or debate in Parliament.  We deplore these unilateral moves,” she added, even as she listed out Modi government’s alleged failures on the economic front.

She said that the Centre was uncertain about a lockdown exit strategy even as it continues to take its toll on common people, migrant workers, and lakhs of small, medium, and large industries. “The initial optimism of the prime minister that the war against the virus would conclude in 21 days has turned out to be misplaced… Successive lockdowns have yielded diminishing returns. The government also stumbled badly on the testing strategy and the import of test kits.”

Other leaders too spoke about greater federal and financial autonomy to states as they were at the forefront of checking the spread of the virus. Many leaders, including Rahul Gandhi, demanded that there should be direct support to the common people.

“People do not want loans but direct help from the governments. It is our responsibility to voice their concerns. This is a question of the country, not political parties. If this does not happen, then, crores of people will get trapped in poverty,” the former Congress president said.

At the end of the meeting, all participants passed a resolution.

Citing that cyclone Amphan has come as a “double blow” when the country is already fighting against the spread of COVID-19, it was important for all opposition parties to urge the central government to immediately declare this as a “national calamity” and “substantially help the states in facing the impact of this disaster”.

“At this juncture, relief and rehabilitation should be the top most priority. But the possibility of an outbreak of other diseases as a result of such calamity must also not be ignored,” the resolution said. 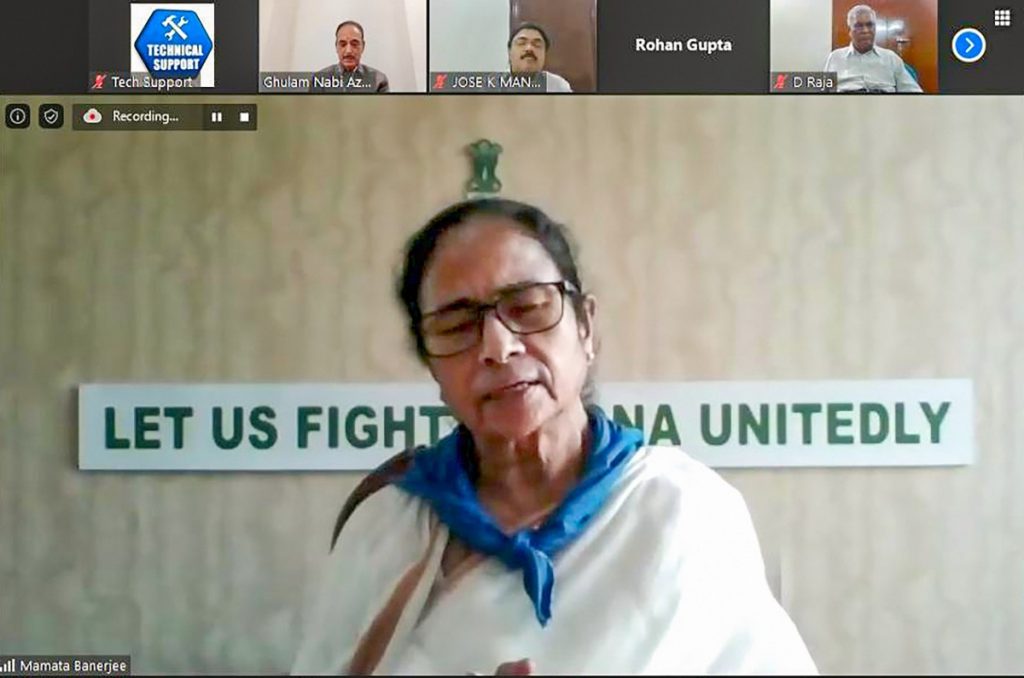 The opposition parties released a statement soon after the meeting. It said that although all parties have extended their support to the Union government, the Centre had barely taken into account their suggestions.

“The like-minded parties believe that this is neither the time for the government at the Centre to indulge in showmanship nor one-upmanship. This is the time for a gigantic collective endeavour,” it said.

“It is important that the Government of India reaches out and engages in a dialogue with all political parties in a systematic manner, listen seriously to the suggestions that we have to make, activate Parliamentary institutions like Standing Committees and be genuine in helping the states financially and otherwise,” the statement added.

In its list of suggestions, the political parties recommended 11 measures that the Centre could take to offer immediate relief to common people. It asked the Centre to transfer Rs 7,500 to all families outside the income tax bracket and distribute 10 kgs of food grains to all needy individuals. It also urged the Centre to offer free transportation to all migrant workers, provide accurate information about the COVID-19 spread in the country and ensure greater transparency.

It also demanded that the annulment of labour laws should immediately be reversed, and provide necessary support to farmers. It said that the Union government should restore parliamentary functioning and oversight immediately, and consult the state governments at every step while planning its exit strategy.