Gandhi and several others leaders also rode cycles to parliament to protest against and draw attention to the issue of high fuel prices. 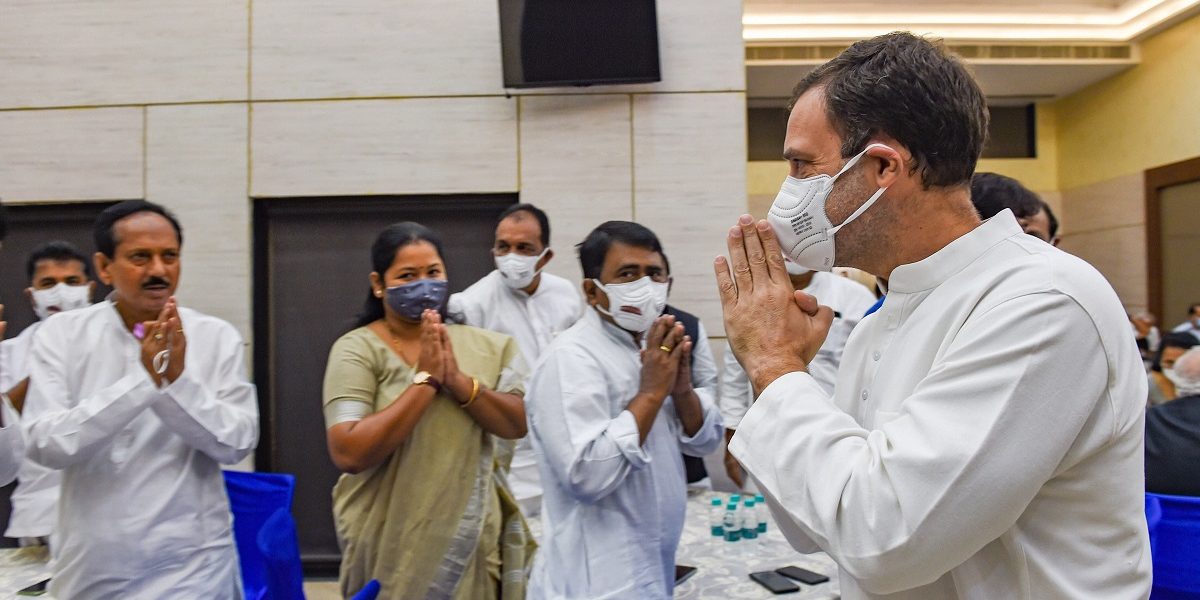 New Delhi: Leaders of at least 15 opposition parties on Tuesday came together at a breakfast meeting called by Congress leader Rahul Gandhi at the Constitution Club to lay stress on greater unity at a time when their protests over the Pegasus snooping allegations have not yet forced the government to agree either to a discussion or an independent judicial probe. Following the meeting, several leaders also rode cycles to parliament to draw attention to the steep rise in fuel prices in the country.

The breakfast meeting was attended by over 100 MPs from the Congress and other parties such as the Trinamool Congress (TMC), the Communist Party of India (Marxist), the CPI, the Nationalist Congress Party (NCP), the Shiv Sena, Dravida Munnetra Kazhagam, the Rashtriya Janata Dal (RJD), the Loktantrik Janata Dal, the Samajwadi Party (SP), the Jharkhand Mukti Morcha, the Revolutionary Socialist Party, the Kerala Congress (M), the Indian Union Muslim League and the Jammu and Kashmir National Conference.

Among the prominent opposition parties which stayed away from the meet were the Aam Aadmi Party and the Bahujan Samaj Party. Apart from Gandhi, other senior leaders from the party who attended the meeting included the leader of opposition in the Rajya Sabha Mallikarjun Kharge; leader of the Congress in the Lok Sabha Adhir Ranjan Chowdhury; K.C. Venugopal; Anand Sharma; and P. Chidambaram. Leaders from other parties who attended the meeting were TMC’s Mahua Moitra; NCP’s Supriya Sule and Praful Patel; Shiv Sena’s Priyanka Chaturvedi and Sanjay Raut; SP’s Ram Gopal Yadav and RJD’s Manoj Jha.

The opposition leaders felt compelled to hold the meet as their protests inside both houses of parliament, for almost two weeks now, have not achieved the goal of forcing the government to hold a discussion and/or a probe into the Pegasus row. Though their repeated protests have resulted in multiple adjournments on all the days of the monsoon session, the Union government has not acceded to their demands.

Also Read: Rahul Gandhi Selected as Potential Spyware Target in Run Up to 2019 Polls and After

‘Will be difficult for BJP, RSS to suppress our united voices’

At the breakfast meeting, Rahul Gandhi made clear why he thought it was essential for all the parties to come together. “The single motive to invite you is that we should unite. The more this voice unites, the more powerful it will become, the more difficult it will become for the BJP and RSS to suppress this voice,” he said.

Announcing his intent to cycle to parliament following the meeting to highlight the issue of rising fuel prices, Gandhi said, “As far as fuel prices are concerned, the people of India are struggling and if we cycle from here to parliament, it will have an impact.”

Incidentally, last week Gandhi and other leaders of his party rode on a tractor to parliament as a sign of solidarity with the farmers who have been protesting against the three contentious farm laws passed by the Narendra Modi government last year.

At the same time, the opposition has also been raising other pressing issues like the farmers’ demand for the three farm laws to be repealed and the steep hike in fuel prices, which has had a cascading effect on the prices of various commodities and has adversely affected household budgets.

With Tuesday being the 12th day of the monsoon session, the house will sit for 19 more days before it is adjourned sine die on August 13. The opposition feels an urgent need to get the Union government to act on its demands. 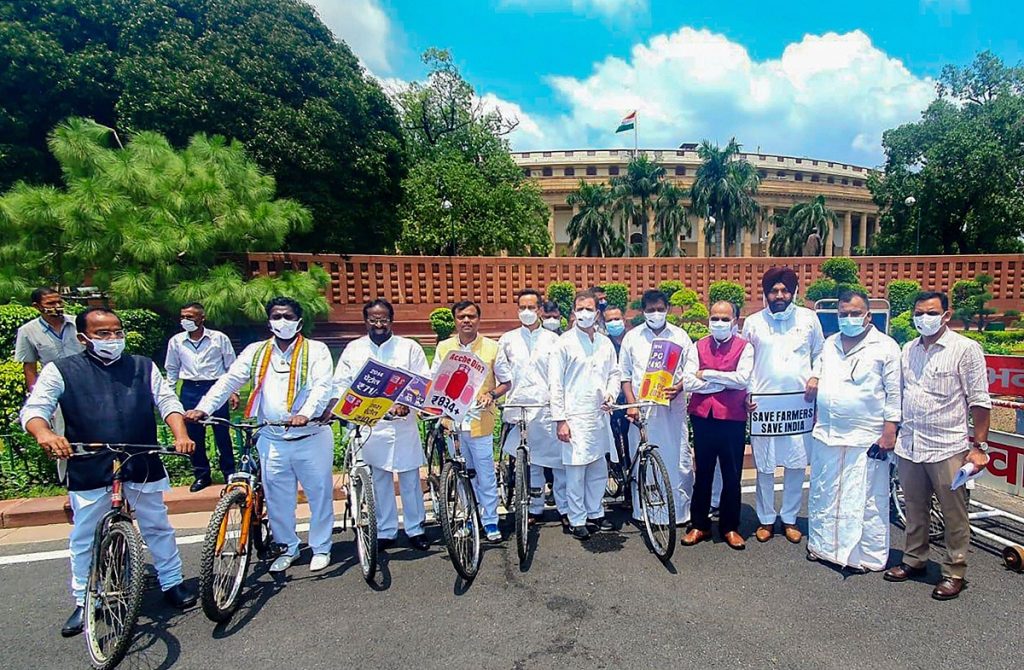 After the breakfast meeting, several opposition leaders cycled to parliament from the Constitution Club to highlight the issue of high fuel prices and express their solidarity with the people.

Following the meeting, several opposition leaders spoke or tweeted about the issue of opposition unity. Congress MP Shashi Tharoor tweeted: “After a sumptuous breakfast, leaders of eleven Opposition parties spoke briefly about the importance of unity in Parliament and on the ground in the struggle against the anti-people policies & undemocratic actions of the BJP government. We are witnessing something special here.”

After a sumptuous breakfast, leaders of eleven Opposition parties spoke briefly about the importance of unity in Parliament and on the ground in the struggle against the anti-people policies & undemocratic actions of the BJP government. We are witnessing something special here. pic.twitter.com/MNtOcocMmF

Sanjay Singh, an AAP member of the Rajya Sabha, defended his party’s decision not to attend the meeting. In a tweet, he said, “Attending or not attending [the meet] is not important. Whenever a discussion is held in parliament, we will support the farmers and raise the issue of snooping row.”

Meanwhile, at the BJP parliamentary party meeting this morning, Prime Minister Narendra Modi attacked the opposition saying it was “not letting parliament function”. He charged that “this is an insult to democracy and to the public.” On Monday, Union defence minister Rajnath Singh had called up Kharge to seek his support to ensure normal functioning of the house. Kharge responded that the government should allow discussions in parliament. Last week too, parliamentary affairs minister Pralhad Joshi and Union minister Piyush Goyal had met Kharge to find a way out of the impasse.

The opposition is keen on first having a discussion on the allegations of misuse of Pegasus before allowing other business to take place.

Last week, Rahul Gandhi, whose name had figured on the snooping list along with several other politicians, journalists, poll strategists, judges and social activists, had stated that the opposition’s voice was being “curtailed in parliament”. He had also stated that if any other business was allowed in the two Houses, then that would be the end of the Pegasus issue.