Oldest Litigant from Hindu Side in Ram Janmabhoomi Case Dies

Mahant Bhaskar Das shared good relations with the Muslim community. His death will be a blow to communal harmony in Ayodhya. 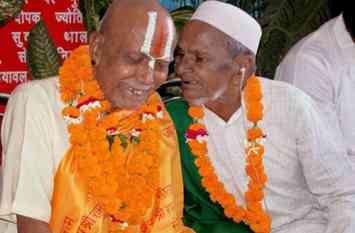 Faizabad: The oldest litigant from the Hindu side in title Babri Masjid/Ram Janmabhoomi suit, Mahant Bhaskar Das (90), suffered a heart attack late Thursday evening and was admitted to a private hospital in critical condition in Faizabad. He passed away early Saturday morning.

Bhaskar Das was the oldest litigant in title suit claiming the Babri Masjid land as the property of Nirmohi Akhara, which he presided over till his death. He moved the civil court in Faizabad in 1956 claiming the land. After this, the mosque was locked and no prayers were performed. Akhara, who claimed the mosque and the land adjacent to it, also sought permission to offer prayers to lord Rama there.

Speaking to the Times of India, Pujari Ram Das, Das’s successor, said, “There are two original litigants in this case, one is Nirmohi Akhara and the other is Sunni Central Waqf Board. After Nirmohi Akhara moved to the court in 1956, then Sunni Central Waqf Board lodged its claim in the year 1961 in the court as the mosque was in possession of Sunni Muslims till 23/24 December 1949, when the idols were placed inside the mosque.”

A noteworthy development after Das’s death was that no minister from either the state government or the Centre went to pay tribute to the leader of the Ram Janmabhoomi movement. No leaders from the BJP or the VHP attended his cremation.

Das was the head priest of a 200-year-old Hanuman Garhi temple in Faizabad and as well as the president of Nirmohi Akhara. During his life time, he maintained good relations with the Muslim community of Ayodhya-Faizabad. He was good friends with Hashim Ansari, the oldest litigant from the Muslim side in the case. Ansari passed away in July, 2016.

“Das, despite being the main plaintiff for Ram Janambhoomi had good relations with the Muslim community. His death is a blow to communal harmony in the twin towns of Ayodhya-Faizabad,” said Muslim leader Captain Afzal Ahmad Khan.

Cremated on the banks of river Saryu in Ayodhya on Saturday afternoon, Das’s last rights were performed by his successor Pujari Ram.