BJD's Alaka Mohanty won the Brajarajnagar assembly seat with a margin of more than 65,000 votes from her nearest rival Kishore Patel of the Congress. BJP's Radha Rani Panda finished third. 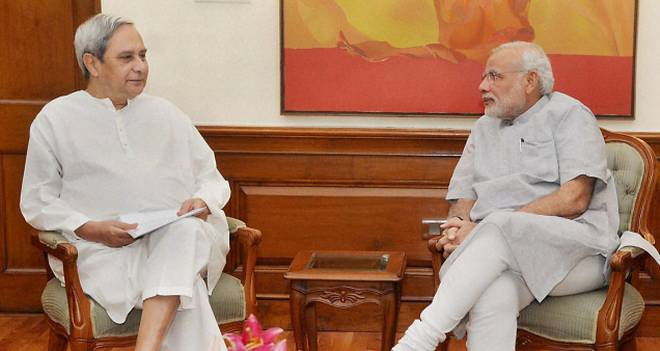 Naveen Patnaik meeting with Narendra Modi. According to a political analyst, Prime Minister Narendra Modi’s 'friendly' relations with BJD supremo Naveen Patnaik has created an impression that both the parties are having a fixed bout in Odisha. Credit: PTI

Bhubaneswar: The Brajarajnagar assembly bye-election outcome on June 3, Friday has dealt a blow to the Bharatiya Janata Party’s (BJP) hopes of consolidating its position in western Odisha, its traditional stronghold, as it prepares for the 2024 general elections.

Biju Janata Dal’s (BJD) Alaka Mohanty, the widow of Kishore Mohanty, won the seat with a margin of more than 65,000 votes from her nearest rival Kishore Patel of the Congress. BJP’s Radha Rani Panda finished third.

The seat was earlier held by BJD MLA Kishore Mohanty, who died of cardiac arrest on December 31, 2021.

This is the first time since the 2019 general elections that the Congress – which was once the main opposition party in the state – has grabbed the second spot in the state election. The Congress had lost the ‘main opposition party’ tag to the BJP in 2019 and its poor run continued even after that. In all the by-elections held after the 2019 general elections, the Congress lagged behind the BJD and the BJP. The party’s performance remained unchanged even in the panchayat and urban polls held in the state earlier this year.

In 2019, the BJP had won as many as 23 seats mainly because of the decline of the Congress, which eventually ceased to be the main opposition party in the state. However, despite a BJD victory in the Brajarajnagar bypoll, the Congress appears to be happy this time with its performance as it has succeeded in pushing the BJP to the third spot.

Congress candidate Kishore Patel, a veteran who was the speaker of the Odisha assembly during former chief minister JB Patnaik’s tenure, got around 28,000 votes. While BJD’s Alaka Mohanty polled 93,953 votes, BJP’s Radha Rani Panda, who had won the seat in 2014, could manage to win only 22,630 votes.

Veteran BJP leader Satyabrata Panda said that the result of the Brajrajnagar by-poll was an embarrassment for the party, which needs to change its strategy and work harder to be able to pose a credible challenge to the BJD in 2024. “We may carry the formal tag of being the main opposition party in the state but people are yet to accept us in that role. In popular perception, our role as the main opposition has been diluted because the ruling BJD is often seen as supporting us on various issues. That creates suspicion in the minds of people,” he said.

The BJD has supported the BJP on a number of issues in the past, including the reading down of Article 370 and the Triple Talaq Bill. It had even voted for BJP’s presidential candidate, Ram Nath Kovind, in 2017 and the likelihood of BJD once again supporting NDA’s candidate in the upcoming presidential poll is not being ruled out.

According to political analyst Shashi Kant Mishra, Prime Minister Narendra Modi’s ‘friendly’ relations with BJD supremo Naveen Patnaik have created an impression that both the parties are having a fixed bout in Odisha. “This may not be true but this kind of an impression has gained ground because of the prime minister’s repeated praise of the chief minister on different issues. While the BJD may encash it politically, this is not good for the BJP in Odisha,” he said.

While it was important for the BJD to retain the Brajarajnagar seat because a loss could have sent wrong signals to the electorate of the state, the BJP was desperate to wrest the seat which it had won in 2014. The BJP had won all the five Lok Sabha seats in the region in the last elections and also done quite well in the western belt in the panchayat elections of 2017.

However, this year’s panchayat election results showed that there has been a massive erosion in BJP’s voter base in the state. The rural polls were swept by the BJD, which won 766 out of the 852 zilla parishad seats. The BJP, which had won 297 zilla parishad seats in 2017, bagged only 42 seats. The Congress finished third with 37 seats.

The saffron party, which is yet to win a single by-election in the state after the 2019 general elections, also trailed behind the BJD in the urban polls held after the three-tier panchayat elections. It had high hopes of doing well in the Brajrajnagar bypoll with top party leaders campaigning for its candidate. The party also did not lack resources – a major constraint for the Congress. Hence, BJP leaders are finding it hard to come to terms with the humiliating defeat of its candidate who finished behind the Congress.

“We would not have felt bad had we managed to get the second spot but finishing behind the Congress is just not acceptable even though we respect the verdict of the people. We have to revisit our poll strategy,” said a senior BJP leader, who did not wish to be named.

“People are aware of the hard work being put in by our chief minister. Hence, they have blessed him and the party,” said BJD general secretary Bijay Nayak. BJD’s victory in the Brajrajnagar bypoll will set the tone for the party’s preparations for the bigger battle two years from now.