His opposition to retaliatory violence between factions in the Naga armed movement earned him welcome in all of them. 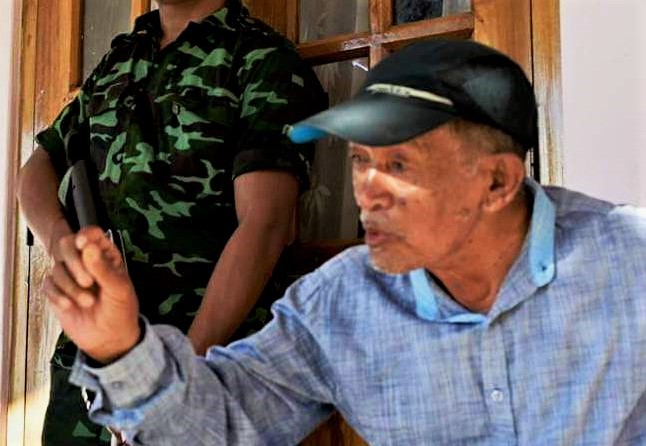 Khole Konyak at his residence at Tobu in Nagaland. Credit: Special arrangement

Khole Baba was known for his condemnation of fratricidal violence among the Nagas. On several occasions, he opposed the decision of Naga leaders to carry out retaliatory killings against adversaries and villages that supported rival factions.

As a result, he was admired by friends and foes alike within the Naga nationalist movement. And that is why he was welcomed and appointed vice-chairman of the Isak-Muivah faction of the National Socialist Council of Nagalim (NSCN-IM) in 2016, after exiting from both the rival Khaplang (NSCN-K) and Unification (NSCN-U) groups.

In his memoirs Souvenir of Khole Konyak (1956-2006), he narrated how Isak Chisi Swu and Thuingaleng Muivah were rescued after being arrested and awarded capital punishment by the Naga National Council (NNC) for opposing the Shillong Accord.

The general had also developed differences with the leadership of NSCN in Myanmar when he opposed an operation against the Khiamniungan Naga villages, which resulted in the deaths of civilians.

His warning to chairman Isak Chisi Swu to not convert Nagas forcibly to Christianity in the Lainung region of Myanmar went unheeded. That policy invited a deadly conflict with the Burmese army, which stepped in to supply weapons to the disenchanted population.

Years later, Khole Baba led a successful effort for the rapproachment with the Lainung Nagas. Many cadres from the region were enrolled with the NSCN.

“In fact, he was a rare gem among the Naga leaders. I met him last year in Delhi but he had remained the same Khole Baba we knew decades ago,” said Anup Chetia, general secretary of the pro-talks faction of the United Liberation Front of Asom (ULFA). “We first met him at Tonu in Myanmar when we crossed the border in 1983. He had a great affection towards the Assamese, and instructed all the NSCN cadres in the Konyak region to assist ULFA cadres whenever they crossed the border.”

Life of hardship and action

In his memoirs, Khole Baba recalls how he was instructed to take part in an operation in the Ao region of Nagaland under Brigadier Chung-O, just a few months after he completed training in 1956.

The goal was to check the Assam Rifles from burning more villages which had already left many people homeless. However, his engagement was discontinued after he contracted small pox. But it was a blessing in disguise for him: while recuperating in his native village of Wangshu, he was apprehended by the Indian army but was let-off as he did not look like a “freedom fighter”.

The first significant episode of significance in his career came in 1968 when he was selected to go to China for training and weapons in a batch of 130 cadres of the NNC headed by Isak Chisi Swu. On their way back, the group was ambushed several times by the Myanmar Army, resulting in the death of many cadres and loss of weapons and ammunition.

In 1975, he was chosen for the second time for the China mission, but it was a journey of “hardship and miseries” after the batch lost its way in the jungles. It was only after 53 days that they were able to set foot in Yunnan after being assisted by the Kachin Independence Army (KIA).

It was during the second visit to China that the infamous Shillong Accord was inked by a section of NNC leaders with the Indian government. The episode, he recalls, “shocked” them, and they were reluctant to meet the Chinese trainers for more than a week. The Chinese encouraged them, and offered similar examples from their own revolutionary movement. The NNC group was also advised to develop a “base area” in Myanmar just as the Red Army had done in China under Mao before 1949.

Khole Baba was upbeat after his appointment as deputy commander-in-chief of the NSCN in 1980, but his optimism was short-lived. He was aghast with the atrocities committed by some young officers from Manipur on villages in Myanmar. In 1988, he decided to join hands with S.S. Khaplang and assume the role of commander-in-chief in the Khaplang faction of NSCN.

In 2011, Khole Baba parted ways with Khaplang and join the Unification faction of the NSCN, headed by N. Kitovi Zhimomi; five years later, he returned to be vice-chairman of the NSCN(IM) after issuing declaring his support for the peace talks, which he said were an “acceptable foundation for our nation’s survival”.

Impact on the peace process

Functionaries of the Myanmar-based NSCN(K) have alleged that Khole Baba had a role in the recent split in their group, in which chairman Khango Konyak was expelled. Khole Baba, they said, was keen to form an agreement with the government and bring as many leaders as possible to the negotiating table. Weeks after his expulsion, Khango has indicated his willingness to engage in the peace parleys.

A senior functionary with an overground faction of the NSCN said Khole Baba’s support may have swayed many in the eastern districts of Nagaland toward supporting the agreement. He referred to the growing demand for a separate state, comprising four districts in the hill state, and the refusal of the leaders to accept any package from the government.

“Khole Baba’s demise will leave a void in the rebel ranks, but it is difficult to say if the episode will have an effect on the government’s decision to accept some demands of the NSCN(IM),” he said.

The impasse in the peace talks is over a few issues in the charter of demands, which the government has been unable to settle. There are fears that accepting those demands could spark turmoil in some Northeastern states, as well as outrage from right-wing groups. The NSCN(IM) has been steadfast about certain demands since talks began in 2003.

Rajeev Bhattacharyya is a senior journalist in Guwahati and author of Rendezvous With Rebels: Journey to Meet India’s Most Wanted Men and Lens and the Guerrilla: Insurgency in India’s Northeast.