'Not the Time for Ego': Margaret Alva Says After TMC Decides to Abstain From VP Poll

Trinamool Congress said since it wasn't consulted before the opposition's vice-presidential candidate was finalised, it will not vote in the election scheduled on August 6. 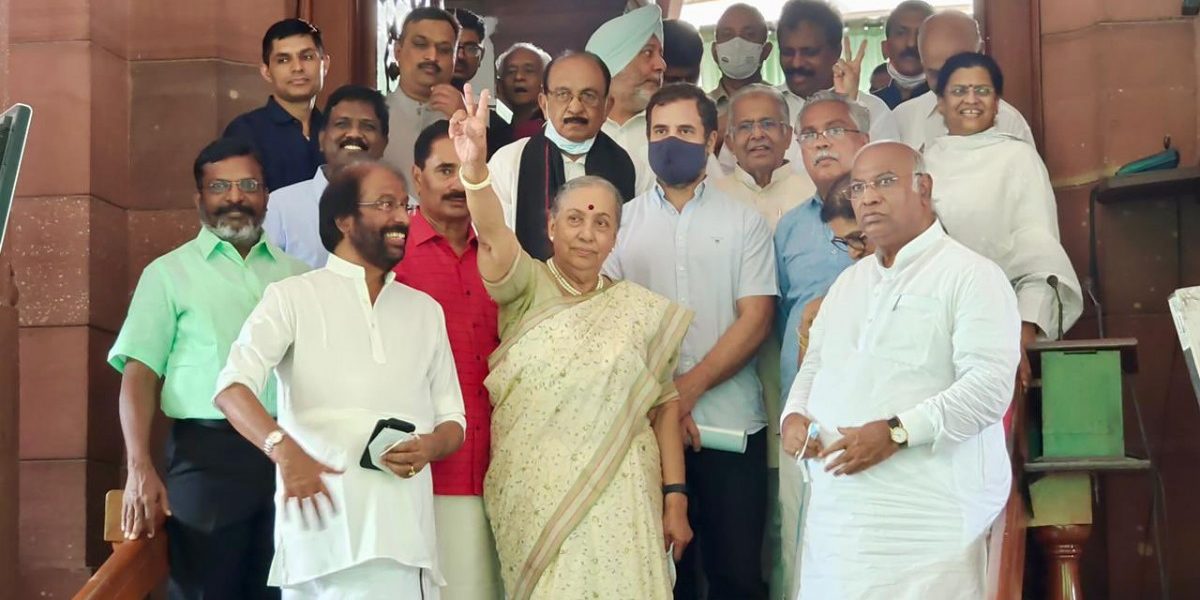 New Delhi: Opposition’s vice-presidential candidate Margaret Alva has described the decision of Trinamool Congress (TMC) to abstain from voting in the August 6 election as “disappointing”

She said it was not the time for “whataboutery, ego or anger”. Taking to Twitter, Alva wrote:

The TMC’s decision to abstain from voting in the VP election is disappointing. This isn’t the time for ‘whataboutery’, ego or anger. This is the time for courage, leadership & unity. I believe, @MamataOfficial , who is the epitome of courage, will stand with the opposition.

Her reaction came a day after the Mamata Banerjee-led party announced that it will abstain from the vice-presidential election as it did not agree with the manner in which the Opposition candidate was decided, without keeping it in the loop.

The leaders of 17 Opposition parties, at a meeting, decided to field Alva, who served as the former governor of Rajasthan and Uttarakhand, as their candidate for the vice-presidential poll.

The leaders of the TMC and the Aam Aadmi Party (AAP) were not present at the meeting that took place at the residence of Nationalist Congress Party (NCP) leader Sharad Pawar on July 17.

Pawar subsequently said he was in touch with both Mamata Banerjee and AAP leader Arvind Kejriwal and was confident of getting their support.

The TMC and the AAP had supported the joint Opposition candidate for the presidential election, Yashwant Sinha.

“There is no question of supporting the NDA candidate, especially Jagdeep Dhankhar. The TMC lawmakers have unanimously decided not to take part in the vice-presidential election,” national general secretary of the party Abhishek Banerjee said on Thursday, July 21, after a meeting of the party MPs at Mamata Banerjee’s Kolkata residence.

Abhishek Banerjee, the nephew of West Bengal chief minister Mamata Banerjee, alleged that the Opposition candidate was decided without proper consultation and deliberation with his party, which has 35 MPs in both houses of parliament.

“We disagree with the process of announcing the Opposition candidate, without keeping the TMC in the loop. We were neither consulted nor was anything discussed with us. So we cannot support the Opposition nominee,” he said.

In fact, cracks in the opposition camp came to the fore even during the presidential poll, after a number of MLAs and MPs from opposition parties voted in favour of NDA’s presidential candidate Droupadi Murmu. As a result, Murmu won an emphatic victory garnering 64% of the votes leaving the opposition candidate, Yashwant Sinha, with 36% of votes.

It is estimated that around 125 MLAs and 17 opposition MPs cross-voted in support of Murmu, to give her an overwhelming lead over her rival Sinha. The reason for Murmu’s emphatic win can also be attributed to the support lent to her candidature by non-NDA parties, including YSR Congress, Telugu Desam Party, Biju Janata Dal, Jharkhand Mukti Morcha, among others.

The vice-presidential election scheduled for August 6 will have MPs of the Lok Sabha and the Rajya Sabha, including the nominated members, as part of the electoral college.