Not Just TMC, the Left Too Can Hurt BJP in the Bengal Civic Polls

Data from the assembly election and the by-poll results indicate the Left has significant support in urban areas.

Party logos of BJP, TMC and CPI(M) against the backdrop of the Hooghly Bridge in Kolkata. Photo: Reuters. Illustration: The Wire

Kolkata: The Bharatiya Janata Party had shrugged off as an aberration the fact that the Left recovered a huge share of votes it earlier lost to it in the October 30 by-election to the urban constituency of Santipur.

However, going by the trend of the results of the assembly general election held in March-April, these numbers were not exactly an aberration.

Now that the Mamata Banerjee government has informed the Calcutta high court that elections in 112 civic bodies in the state will be completed by April 2022, starting with Kolkata Municipal Corporation (KMC) in December, assembly election data possibly means that the poll managers at 6, Muralidhar Sen Lane – the state office of the BJP – are a worried lot.

Data shows that the Left has secured a higher share of votes in urban localities than in rural areas.

In Santipur, in the assembly general elections held in March-April, the Left-supported Congress candidate got only 4.48% of the polled votes, while the BJP’s candidate, sitting Lok Sabha MP Jagannath Sarkar, won it by bagging 49.94% of the vote share, against TMC’s share of 42.72%.

Six months later, in the by-election necessitated by Sarkar’s resignation – as the party wanted him to retain his Lok Sabha membership – TMC won by a massive margin, bagging 59.89% of the polled votes. The BJP’s vote share came down to 23.22%. The Left and the Congress contested independently. But the Left’s CPI(M) candidate secured 19.57% of the polled votes, while the Congress got only 1.41%.

The October 30 bypoll took place for four seats, of which Santipur and Khardah were urban, Dinhata mostly rural and Gosaba entirely rural. In Khardah, the TMC’s vote share rose from 49.04% to 73.59% and the BJP’s nosedived from 33.67% to 13.07%. The Left, too, lost its votes to the TMC, as its share came down from 14.70% to 10.39%. But this was no loss compared to that of the BJP. In rural Gosaba and mostly-rural Dinhata, the Left’s share remained below 3% in both elections.

The Left had contested the general elections in alliance with the Congress and the Indian Secular Front but fought the bypolls on their own. 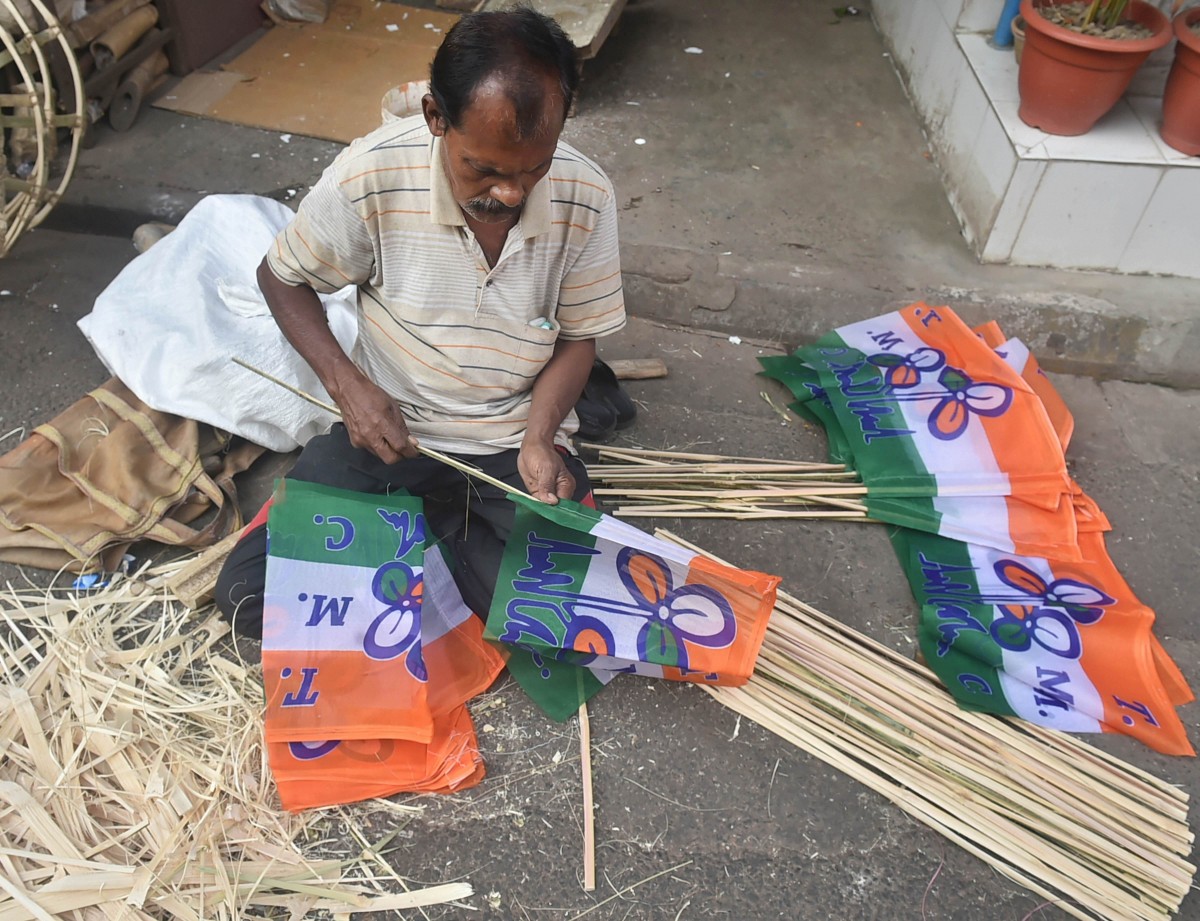 The urban-rural divide in voting pattern

One distinct trend observed in the assembly general election results is that while the Left – the CPI(M), CPI, Revolutionary Socialist Party (RSP) and Forward Bloc – secured only than 5.87% of the polled votes in the state, in south Bengal’s urban pockets, especially in areas within a 100 km from Kolkata, the Left candidates obtained 10-20% of the polled votes.

This was in sharp contrast to their performance in the rural areas, especially in districts away from Kolkata, such as in north Bengal and southwestern Bengal, where Left candidates got 2-4% votes in most of the seats.

In the urban areas in the districts of Howrah, Hooghly, North 24 Parganas, Nadia and Bardhaman, Left candidates, especially those from the CPI(M), secured 12-15% votes on an average. However, Left-backed Congress candidates did not get that much votes even in urban areas.

Take, for example, the case of Kolkata. Left candidates got more than 10% votes in almost all seats, except for those where the TMC alone secured 60-75% vote share. But the Left’s gap with the BJP was significantly thinner in most parts of Kolkata, compared to the districts in north Bengal and southwestern Bengal.

Here are a few examples of the Left’s vote share in assembly seats from Kolkata:

In the urban belt of Kolkata’s neighbouring district of North 24 Parganas the following figures stood as examples:

In the Barrackpore industrial belt in the district, too, the Left’s vote share stood above 10% in all seats.

In Howrah, another neighbouring district of Kolkata, the same trend was observed:

In Bardhaman Purba and Paschim districts, the following constituencies recorded higher vote share for the Left than most rural constituencies.

Traditionally, TMC has been a Kolkata-centric, mostly-urban party, while the Left had its stronghold in the rural belt. BJP’s rise in Bengal happened from the 2018 panchayat elections. In the 2019 Lok Sabha elections, the BJP swept most of the rural belts, while the TMC retained its hold in and around Kolkata. The further from Kolkata a place, the greater was the BJP’s vote share, at the cost of the Left’s misery.

Now that the BJP’s has lost its steam – not only has its ambitious Bengal campaign faltered but the party also seems to be going through a rough period nationally – will the Left manage to recover more votes from the BJP?

On its part, the Left has embarked on the civic poll campaign earlier than the BJP for the KMC elections, scheduled on December 19. Not only has it announced its near-complete list of candidates for the Kolkata municipal elections even before the TMC, it has also released its manifesto, which reflects some amount of ground work in an attempt to change the direction of the political discourse. The candidates are mostly young, and many of them had been part of the ‘Red Volunteer’ teams that offered people different kinds of services during the lockdowns. Nearly half the candidates are women.

The manifesto includes a promise for digitising the entire tender process, improving public health centres and potable water supply, canteens and markets for the working class people, public toilets for women, installation of sanitary vending machines in schools and public toilets, establishing creches for working women, mobile application for protection of environment that would enable commoners to report felling of trees or filling of water bodies and social security, educational stipend and job-centric training for the people from the third gender.

On the other hand, while December 1 is the last date for filing nomination, the BJP was yet to finalise its candidate list as of November 28 evening.

A state committee member of Bengal BJP, who did not wish to be named, told The Wire on Saturday night that state unit president Sukanta Majumdar was still in his home district of Dakshin Dinajpur in north Bengal till Saturday.

“He is expected to reach Kolkata on Sunday, when we will try to finalise the list of candidates. However, if it does not end on Sunday, it might get even more delayed because most of the top leaders, including Majumdar and former state unit president Dilip Ghosh, will be flying to Delhi early on Monday to attend the Lok Sabha session. There is still a lot of uncertainty,” the leader said.

The BJP’s Bengal leadership is also waiting for the Calcutta high court’s verdict on their petition seeking the conduction of civic elections in all municipalities and municipal corporations at one time. They have opposed the state election commission’s plan of conducting the elections in Kolkata first and in the rest of the state’s civic bodies by April 30. But the BJP fears that separate elections would give advantage to the TMC.

“We’ll most probably announce the candidate list after seeing what the high court says. We are still hoping that the court will not allow conduction of election in Kolkata first and in the rest of the state later. The Kolkata results will surely influence voters in other parts of the state,” said a Bengal BJP veteran.

According to columnist Udayan Bandyopadhyay, who teaches political science at Bangabasi College in Kolkata, the Left’s journey in post-Independence Bengal started with urban support due to movements in the trade union front, among students, teachers and cultural personalities and refugees from eastern Bengal during the 1950s and ‘60s. Their rural vote bank started building after they came to power with the United Front government in 1967, and more precisely after the Left Front government came to power in 1977 and implemented the land reforms.

“With the rise of Mamata Banerjee in the late 1990s, they started losing their urban votes and the rural vote bank was dented after the anti-displacement movements of Singur and Nandigram. However, after losing power to the TMC in 2011, the Left suffered a massive loss of its support and organisational strength in the rural areas, whereas in urban areas some support and organisational strength always remained,” Bandyopadhyay said.

He expects the Left to increase its vote share compared to the assembly elections, while the BJP may do well in some urban areas that are away from Kolkata, such as Berhampore in Murshidabad and Siliguri in Darjeeling district.

File image: CPI(M) candidate in Bally Dipsita Dhar campaigns in her constituency ahead of the assembly polls. Photo: File

Psephologist Biswanath Chakraborty, a professor of political science at Rabindra Bharati University in Kolkata, painted a complementary picture when he said that the BJP in Bengal had failed to make as much inroads in the urban areas as in the rural.

“In the Kolkata municipal corporation area, the BJP’s vote share stood at 29% in the assembly elections, whereas in the whole state the share stood at 38.13%. In urban areas, the ‘no vote to BJP’ campaign carried by a section of leftists, too, had influenced some voters, especially the secular and liberal ones, which can be seen from the dip in the BJP’s vote share in urban areas. In the Kolkata corporation election, I would not be surprised if the Left secures a higher vote-share or number of seats than the BJP,” Chakraborty said.

The Kolkata Municipal Corporation has 144 wards.

In the 2015 election, the TMC won 114 seats, while the Left won 15, the BJP won 7 and the Congress won 5. Going by the trend of the assembly general elections and the Bhawanipur bypoll, the TMC is leading in 134 seats. In the six years in between, the BJP had had a spectacular rise and subsequently a heartbreak.

With no one expecting an upset for TMC, the development to watch out for is if BJP can surpass the Left as the main opposition in KMC or if the Left can manage to recover votes it lost to the BJP.