NE Dispatch: Trouble Between BJP and NPF in Nagaland; Manipur Soon to Have a Pony Sanctuary 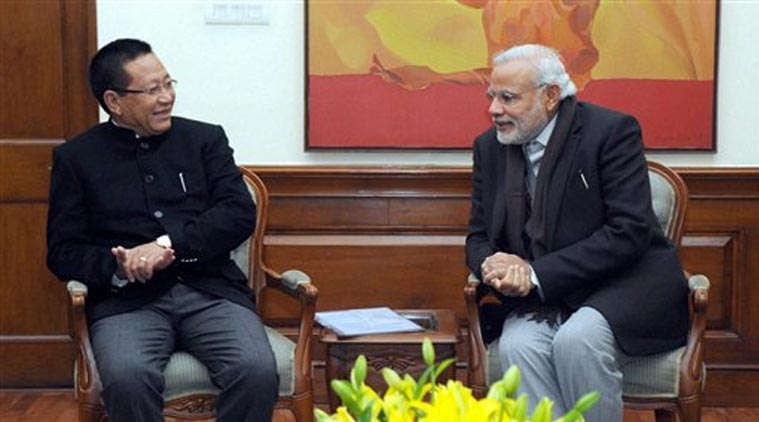 Nagaland: Is trouble brewing between the BJP and its ally, the ruling NPF?

Trouble is brewing between the BJP and the ruling Naga People’s Front (NPF), according to local media reports.

Ever since the NPF-led Democratic Alliance of Nagaland (DAN) government removed BJP MLA Mmhonlumo Kikon from the post of parliamentary secretary for labour and employment, skill development and border affairs because of “anti government activities” on October 29, BJP members have been demanding that it withdraw support to the government and break its alliance with the NPF.

The NPF is a part of the BJP’s North East Democratic Alliance (NEDA). The BJP won one seat in the 2013 assembly polls in the state but now has four MLAs in the 60-member assembly, after three of the four Nationalist Congress Party (NCP) members defected to the BJP in June, 2014.

As per reports, the situation worsened after the BJP government at the Centre recently said it would not repeal the Armed Forces (Special Powers) Act, 1958 any time soon. In June, the Centre declared “all of Nagaland” a “disturbed area”, leading opposition parties in the state, particularly the Congress, to seek a response from the home ministry on the situation of militancy in the region and on whether the army does periodic reviews there.

In September, the NPF also took up the matter of revoking AFSPA in its central executive council meeting “with utmost concern” and reportedly reiterated the demand to revoke the Act from all the Naga areas with a resolution to that effect. The release issued to the press after the meeting said NPF president Shurhozelie Liezietsu wrote a letter on August 31 last year to the home ministry, informing it of the impact of AFSPA in Nagaland and its neighbouring states.

In the letter, addressed to the secretary (north east), Shurhozelie said the people of the region “have been kept under fear psychosis for all these years”.

“Nagaland is now a peaceful state. Such an Act which creates fear among innocent citizens should be done away with at the earliest. Your office, is therefore, requested to initiate necessary steps  for revocation of AFSPA from the entire Naga areas at the earliest for the betterment of its citizens and to enable them to live in peace and harmony.”

However, minister of state for home Kiren Rijiju recently told the Rajya Sabha that the government is not willing to repeal the Act any time soon.

Early this year, as per media reports, the BJP tried to topple the NPF government with the help of former state chief minister and NPF leader Neiphu Rio. Of the 38 NPF MLAs, 22 expressed no confidence in chief minister T.R. Zeliang’s leadership, in a letter submitted to the governor. Rio sided with the dissidents, allegedly hoping to fill the berth vacated by former union minister Sarbananda Sonowal when he became Assam chief minister. On November 24, the Gauhati high court issued a notice to state assembly speaker Tenzing Norbu Thongdok, 42 MLAs and chief minister Pema Khandu, on the issue of moving from the Congress to the People’s Party of Arunachal (PPA) in September this year, thus adding a new chapter to the recent political drama that engulfed the state.

The high court issued the notice in response to a writ petition filed by state Pradesh Congress Committee president Padi Richo on November 23, challenging the validity of the merger between a state unit of the Congress and a regional party, the PPA.

Speaking to reporters about the petition, Richo said Khandu and 42 MLAs claimed to have merged with the PPA to form the present government, which was accepted by the speaker. After that, the legislators were notified as PPA members in an assembly bulletin. Richo has pleaded with the court in the petition to set aside the bulletin and declare the speaker’s order illegal.

The petition argued that there had been no merger between the state unit of Congress and the PPA because the election law (Reservation and Allotment order, 1968) did not permit mergers of state units of a national party with a regional party.

The court, after hearing the initial argument of the petitioner’s counsels, said, “Let a notice of motion be issued calling upon the respondents to show cause as to why a rule should not be issued as prayed for, and/or why such further orders or other orders should not be passed as to this court may deem fit and proper.” The notice was made returnable by January 4, 2017.

The court also ordered that a notice should be issued on the interim prayer of the petitioner.

Manipur: State government to soon have a sanctuary to protect the Manipuri pony In addition to the many bounties of nature, Manipur also has a unique animal – the Manipuri pony. The origin of modern-day polo is owed to this animal, a medium sized pony found only in the state, possibly developed from either the Tibetan species or as a cross between the Mongolian wild horse and the Arabian variety.

However, for some years now, the Manipuri pony has been facing near extinction, with its numbers dwindling every year. If the state chief minister Okram Ibobi Singh is to be believed, the animal will soon get a new lease of life.

On November 22, speaking at the inaugural event of the 10th Manipur Polo Tournament, an annual affair held in Imphal as part of the yearly extravaganza of the Sangai festival, Singh said the state government “is working towards declaring the pony as an endangered breed of horses” and steps were being taken to initiate the establishment of a sanctuary for its protection.

However, the chief minister didn’t mention whether these steps were a part of the draft Manipur Pony Conservation and Development Policy. The state cabinet approved of the draft policy in October this year.

As per a press note released after the cabinet meeting, M. Okendro, the spokesperson of the state government, was quoted as saying that the policy had been approved, taking into account the dwindling numbers of the pony.

The note said according to the 17th Quinquennial Livestock Census held in 2003, the number of the Manipuri Pony was 1,898.  “The number has decreased to 1,101 in the 19th census held in 2012. Therefore, the government has given approval of the policy in order to save the pony from extinction.”

According to the policy, the state veterinary and animal husbandry department would be the nodal department under which a special head of accounts would be opened to maintain the funds spent on it. A Manipuri Pony Development Board would also be set up, comprising the chief minister, the minister of the concerned department, the principal secretary and representatives of various organisations associated with the pony.

Though polo is said to have its origin in Persia, the modern version of the sport is believed to have been born in Manipur. It is believed that the Meitei kings played a versio of the same on Manipuri ponies. The reference of the Manipuri pony is found as far back as 1584 – in the royal chronicles of Manipur and thereafter in its literature. The Meitei kings rode these ponies to fight wars, as per the royal records.

While the first polo club was opened by the British in Silchar (Assam) in 1864 where the Manipuri pony was used, the Manipur Horse Riding and Polo Association was established in 1977 to promote the pony and the sport.

This year’s edition of the polo tournament organised by the association, held at Mapal Kangjeibung, often claimed to be the first polo ground in the world, saw participants from four countries besides India. Teams from Australia, the US, Kenya and England took part in the day-long sporting event alongside teams from the Manipur Polo Association and the Indian Polo Association. The Australian team won this year’s cup.