Today’s was the first major election held in Kashmir after the by-polls to Srinagar in April 2017 where nine civilians were killed.

Voters wait in a due to cast their votes at a polling station in Handwara in North Kashmir on April 11, 2019. Photo: PTI/S. Irfan

Kupwara/Baramulla: The day started rather quietly – expect for a village in Kupwara where a group of young boys pelted stones at a polling booth. In the evening, when the state election department released the overall poll percentage of the Valley’s Baramulla Lok Sabha constituency, it described the day as peaceful.

By 6:30 pm, however, news started pouring in about clashes in parts of Kupwara.

Minutes later another update followed: a teenage boy had been killed in clashes with security forces in Mandigam village; his death overshadowing the day of polling in the north Kashmir constituency, which is spread over three districts of Baramulla, Kupwara and Bandipora. The constituency went to polls during first phase of general elections in India.

A group of youth had taken to streets in Mandigam village of Kupwara and pelted stones on forces which were retreating after poll duty. In the ensuing clashes, 7th standard student, Owais Mushtaq was seriously injured by pellets fired by the forces.

A local journalist from Kupwara said 13-year old Mushtaq was rushed to district hospital where doctors declared him brought dead. “The boy had multiple pellet injuries to his body, mainly chest and head,” said Dr Rouf Ahmad, medical superintendent of the hospital.

The SSP Handwara Ashish Mishra said police has registered FIR into the incident and taken up the investigation.

Late in the evening, similar clashes broke out in Palhallan area of nearby Baramulla district which had witnessed near total boycott. At least 17 persons, including six force personnel, were injured in the protests there.

“A great day has ended on a very sour note. Such killings are a result of disproportionate force being used against the protesters, with a sense of impunity,” tweeted bureaucrat-turned politician Shah  Faesal.

“Those responsible for this gruesome murder should be booked immediately. The government can set an example by arresting the accused personnel on the basis of prima facie evidence,” he said in another tweet.

The poll day in the most watched constituency

At most places across north Kashmir, comprising of 15 assembly segments, long queues outside polling booths were missing. Instead, people dropped in in ones and twos to cast their ballot.

Being held amid boycott call given by separatists, the election is seen as a direct contest between National Conference’s Muhammad Akbar Lone and Sajjad Lone-led Peoples Conference’s Raja Aijaz Ali.

The Peoples Democratic Party, which saw several members like influential Shia leader Imran Ansari and ex-minister Basharat Bukhari, both from Baramulla, and Yasir Reshi from Bandipora, quitting the party last year following rebellion, represents the seat in parliament. The rebellion, many believe, dented the party’s prospects. 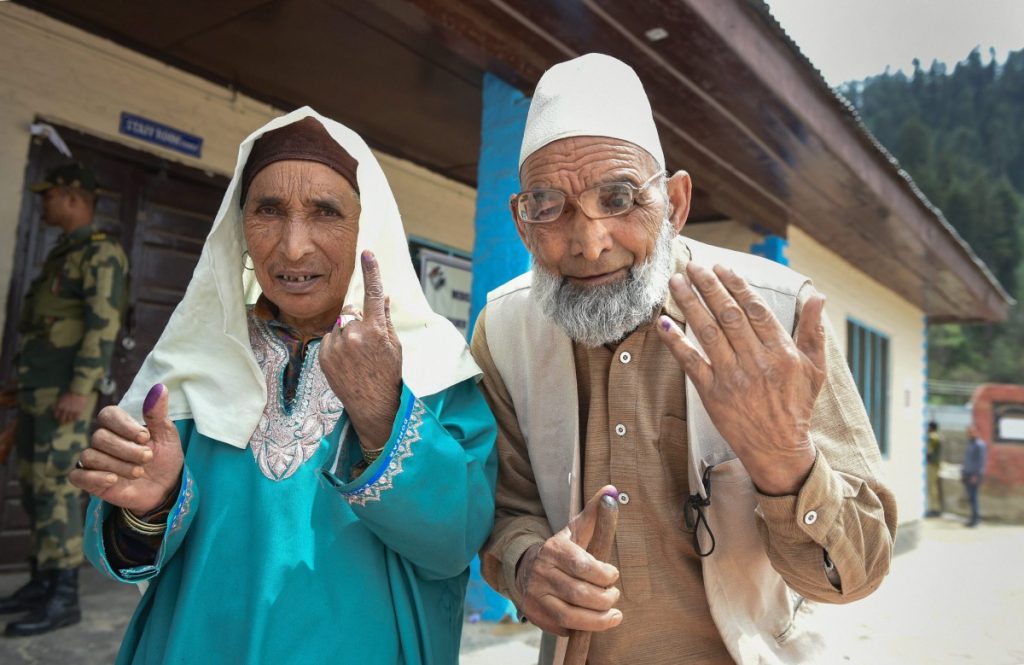 An elderly couple show their inked fingers after casting their votes at a polling station in Kupwara district in North Kashmir on April 11, 2019. Credit: PTI/S. Irfan

But independent candidate Engineer Rashid, who surprised many for the size of crowds he drew to his rallies, is being described as dark horse. Though many say he may end up playing ‘spoiler’ in the contest, other argued that the outspoken Rashid could surprise many.

The grand old party, Congress isn’t even in the contest. Across many polling booths, voters didn’t even know the name of the party’s candidate, Haji Farooq Ahmad Mir.

“I voted for hal (plough, the symbol of National Conference),” a youth in mid-20s said after casting his vote in Langate. “This (voting) is only way to ensure an end to the tyranny in Kashmir that we have been facing for past one year (the governor rule).”

As more people gathered around, he added: “Three young militants, including a teenager, were killed here towards end of last year. Go and visit their homes, the families are devastated and nobody has ever inquired about them. This is the story of every Kashmir family.”

At 1 pm, of 10,319 votes, 6,789 had been cast there, the highest in five assembly constituencies of Kupwara. The overall voting percentage in the district had crossed 21.

Inside a higher secondary school in Handwara, the native town of Sajad Lone, the mood was festive. Of total 2,004 votes, 961 people had exercised their rights.

A burly youth who attempted to cast his vote a second time was caught by alert polling staff. “Everybody knows who is winning this election. We have a new leader now who doesn’t have the baggage of betrayals,” said a youth who identified himself as Iqbal, referring to Sajad Lone.

However, others had a different take. “Voting for them (PC) is strengthening BJP in Kashmir. I will vote for any party but them,” said another youth.

As the day wore on, people moved in groups towards booths. At Gushi, a small village in Kupwara town, the voters rush meant good business for Asif Ahmad who had set up a temporary tea stall in the premises of government school-turned polling booth.

“I have already sold more than 150 cups of tea,” an ecstatic Asif told The Wire.

While the young man was telling me about the brisk voting at the booth, an aged woman, helped by two young boys, came out of the booth. Her name was Mahti. “I must be around 82. I made sure to not to miss my vote,” the grey-haired woman said in broken words. 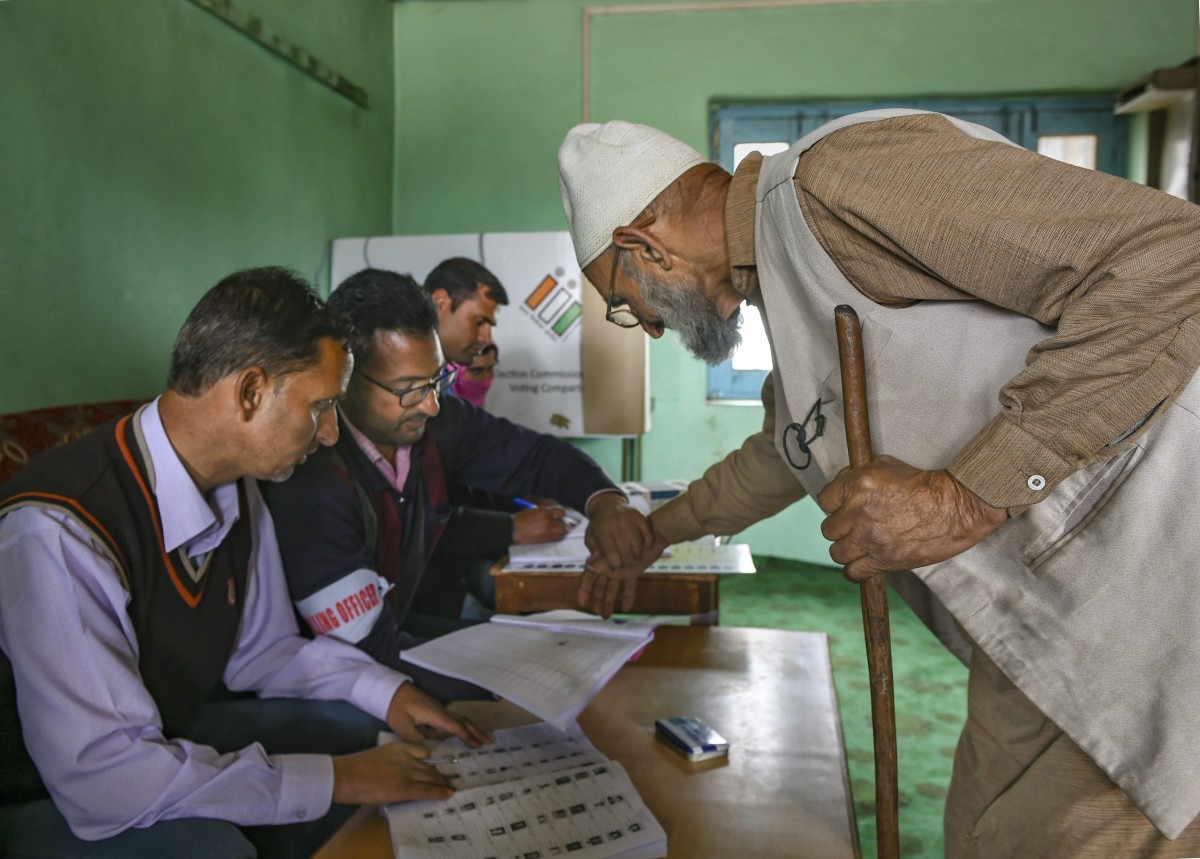 An elderly voters completes the formalities before casting hist vote at a polling station in Kupwara district in North Kashmir on April 11, 2019. Credit: PTI/S. Irfan

Asked which party she voted for, Mahti evaded giving a direct response. “It is a sin to waste your vote,” she said, as the boys helped her out of the booth.

However, there were several pockets across the segment, the traditional strongholds of separatists, which witnessed a near total boycott, including Sopore, Palhallan, Baramulla town, and Hajin, which has over the years grown as a stronghold of militants. Just 10 votes of 2,236 were cast in all of Hajin.

Some other places like Babagund in Kupwara where nine houses were gutted in an encounter in February in which two militants were killed in fierce encounter along with five security force personnel. The village is still brewing with anger against mainstream leaders and it got reflected in today’s polls – of 861 votes only 14 were polled.

Also read: BSF Personnel Fire in the Air as People Try to Vote Without ID Cards in Kairana

Located on Srinagar-Baramulla highway, Palhallan town witnessed intense clashes late in the afternoon following which the forces fired teargas shells to disperse the protestors. Only nine votes had been polled at one of the polling booths in the town. One among them was a first time voter, Iqbal. “I voted for my party,” he said, without revealing the name of of the party. “The same party our family supports.”

Today’s was the first major election held in Kashmir after the by-polls to Srinagar in April 2017 in which nine civilians were killed in forces action during clashes with youth and come after a major crackdown by government of India on separatists and their alleged sympathisers.

Over the past one month, the Centre has taken several hard steps in Kashmir, banning religio-political organisation Jama’at-e-Islamia, JKLF and booking several alleged sympathisers of separatists under the Public Safety Act.

While the election was largely peaceful in north Kashmir, barring the death of teenage in pellet firing after polling hours, May 23 will be awaited with bated breath.

A political science student, Nazir Ahmad, summed up the scenario. Congress, he said, wasn’t even in the contest and PDP is “fighting for number second position”. “This fight is about hardcore support base of a party. Let’s wait and see whose cadre is faithful,” he said.