Under Nitish Kumar the Night-Watchman, Bihar Will Remain Unsettled

The JD(U) leader is back as chief minister but his reduced stature and depleted political capital make him more susceptible to blandishments and blackmail than ever before. 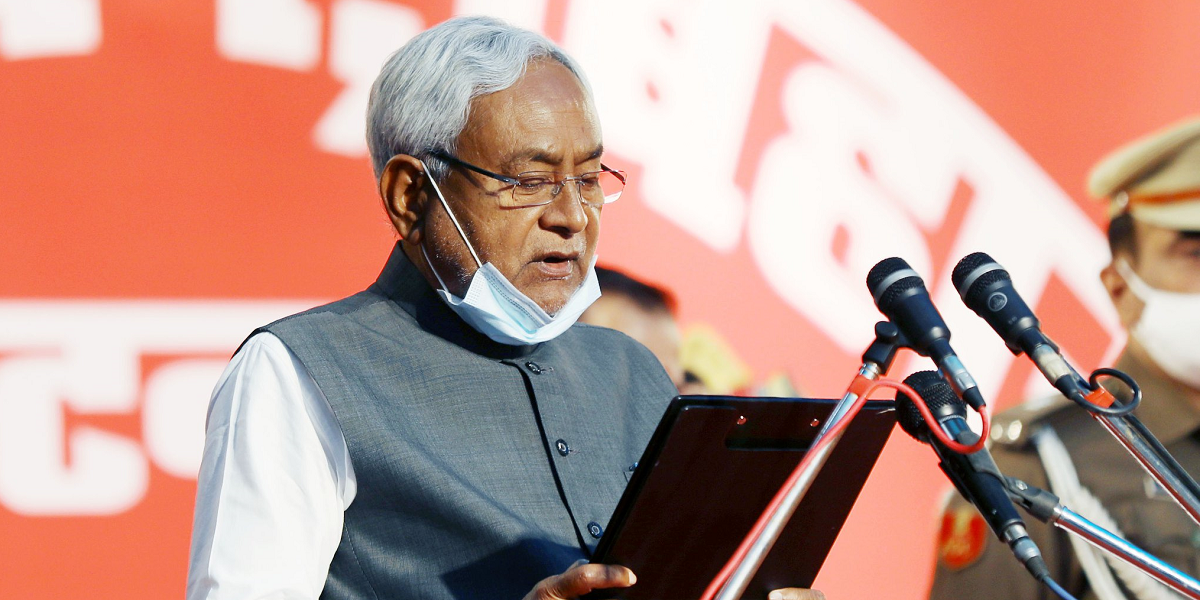 There is a palpable unnaturalness about the new nizam in Patna. A man who has received no mandate to govern has been installed in the chief minister’s office. Consequently, there is a built-in redundancy in this version of the Nitish Kumar arrangement.

Nitish Kumar is in such a pitiable political corner that he cannot even complain that he has been stabbed in the back by those very people who are now pretending to humour him. There can be no joy for him; all he can have is a resentful satisfaction that he has stalled, for now, Lalu Prasad Yadav’s son. The Rashtriya Janata Dal (RJD), nonetheless, remains the most potent political force in Bihar, whereas the ‘Sushasan Babu’ wields only a fading presence.

Though Nitish has taken oath one more time as the chief minister, everyone in Bihar knows that he has sustained debilitating wounds at the hands of 31-year old ‘boy’. Throughout the 2020 campaign, the young RJD crackled with energy whereas Nitish Kumar could barely summon the excitement of a sluggish hippopotamus.

It must rankle that the ‘uncouth’ young man never talked back, never dignified the galis that came his way from Nitish Kumar. And, the chief minister, a man who always patted himself on the back for his ‘superior’ politics, was reduced to reminding voters about the number of children Lalu Prasad had had. Didn’t he know how many children Lalu Prasad had sired before the JD(U)-RJD tie-up in 2015? Surely he did; but in 2020 the ‘noble’ man trots out that number to belittle and delegitimise the RJD leader.

A much-reduced stature and much depleted political capital make Nitish Kumar precariously susceptible to blandishments and blackmail. None of the entrenched interests – the bureaucracy, the upper castes, the media, big business, the organised crime entrepreneurs – will have any reason to accord him any deference; their compliance will, at best, be niggardly. And, there will be no getting away from the political calculus: just as in the short-lived 2015 coalition, the majority of NDA MLAs will not heed direction from him. All said and done, the Janata Dal (United) is an entity different and distinct from the BJP – just as it was and is from its 2015 ally, the RJD. The onus will be entirely on Nitish Kumar to forge computability, convergence and comradeship with the BJP’s Bihar upper caste crowd, which makes no secret of its sullen tolerance of Nitish Kumar and his pretension to practice a politics morally superior to their own.

However, Nitish’s chief ministerial innings will be hobbled by a far more intractable malignancy: the 2020 vote – assuming it was fairly counted – is no ringing endorsement of any leader or political party; but with practised insincerity, the BJP leadership, from the Prime Minister downward, have claimed a mandate for the Central government’s policies.

Also Read: Nitish Kumar’s Journey From Trenchant Modi Critic To the Most Reliable Executor of ‘Moditva’

The 2020 vote is, of course, an endorsement of the BJP’s politics. The BJP has earned a right to crow. An important state has been retained in the NDA column. The Chirag card was a success. Not only did the young Paswan aggravate the anti-Nitish sentiment, his tirade against the chief minister rather subtly distracted the voters from the Modi government’s deeply flawed policies. The Chirag duplicity was simply brilliant. And it paid off. As did the politics of ‘splinter’ tactics. The BJP generously used its mountainous money pile to sponsor the ‘vote katwas.’

In the second and third phases, the prime minister gleefully abandoned the high moral ground and came down to the familiar tricks of working up ‘Hindutva’ lite passions and prejudices. The BJP strategists can take satisfaction that the prime minister has not lost his ability to use a dog whistle and that he can still work up the voters’ anxieties and fears. Not an endorsement of the Centre’s policies

Despite all these exertions and excesses, the NDA barely managed to cross the finish line. The ‘Chankayas’ were predicting a two-third majority for themselves. By no stretch of the imagination can Bihar’s 2020 vote be seen as an endorsement of the Central government’s policies, as the prime minister has claimed.

Most outrageous is the suggestion that the Bihar vote is an approval of the way the Modi government has mis-handled the COVID-19 pandemic. This is a government that could tell the apex court that the millions of migrants walking across the land was triggered by ‘fake news’. To cite a dubiously close election victory as a ratification of that callousness reveals a disquieting streak.

And, then, consider the fact that the most casteist of all chief ministers, the yogi from Uttar Pradesh, was one of the BJP’s star campaigners. This is the very man who has practically disenfranchised the minorities and the Dalits. Yet, the Bihar vote is being touted as an endorsement of the imaginary “sab ka saath, sab ka vikas” plank.

It is this aggressive manufacturing of a bogus mandate for the BJP’s national leadership out of the 2020 Bihar vote that will further encroach into Nitish Kumar’s limited authority domain. He will find himself obliged to swallow his personal pride and his party’s ‘welfare politics’ and, instead, will be required to underwrite whatever departures from constitutional decency the Modi regime makes. It will be unnatural, as also unacceptable, for the Bihar BJP core social support – the upper castes – to simply let Nitish Kumar be Nitish Kumar.

Whichever way it is sliced, Bihar has dealt itself a bad hand. The state’s upper caste voters have shown a remarkable tenacity as the most unenlightened, most backward-looking group, still smarting under the fear of a Lalu Prasad Yadav who was made to leave “Pataliputra” 15 years ago. In the bargain, Bihar is settling on for a prolonged spell of tentativeness.