Sources in the JD(U) and BJP leadership say Bihar was close to becoming another successful example of BJP's 'Operation Lotus'. Until Nitish Kumar got wind and acted – with a little help from Tejashwi Yadav. 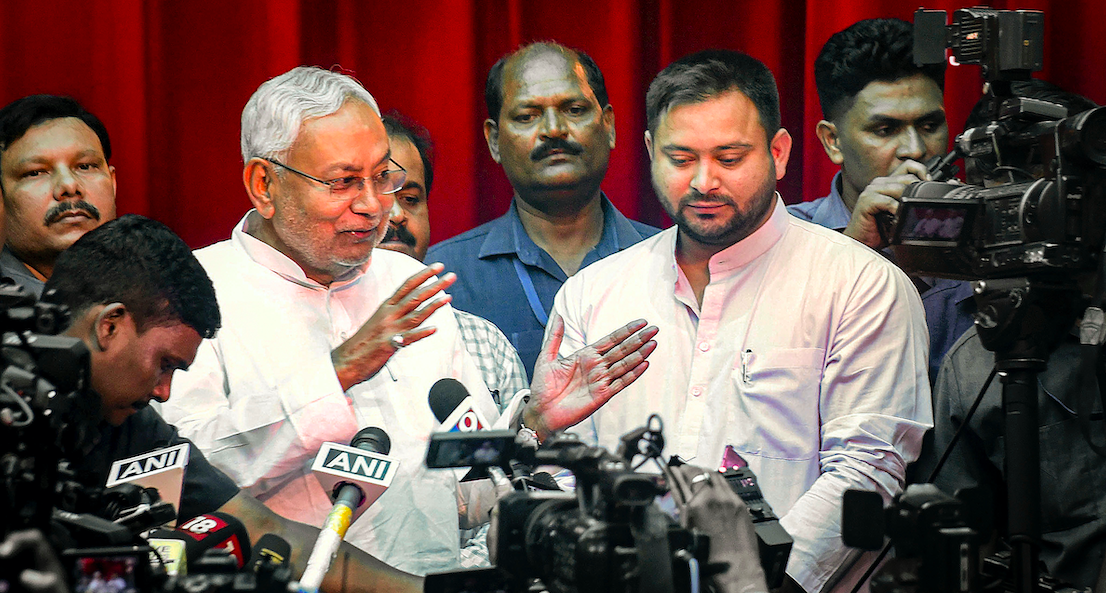 Bihar Chief MInister Nitish Kumar with his deputy Tejaswi Yadav speaks to the media after their swearing-in ceremony at Rajbhawan in Patna, Wednesday, Aug. 10, 2022. Photo: PTI

Bharatiya Janata Party leaders and cadres are crying foul and hitting the streets in protest against what they believe is ‘deceit’ on Nitish Kumar’s part. However, it is clear now that the Bihar chief minister has, in fact, thwarted a chapter of the kind of coup that took down the Uddhav Thackeray government in Maharashtra.

If sources at the top of the dismantled National Democratic Alliance in Bihar are to be believed, then Nitish had no clue whatsoever about plans being executed by an ‘influential minister’ at the Centre since Arun Jaitely’s death in 2019.

At that time Nitish was bogged down by the attacks on him by the then leader of opposition in Bihar assembly Tejashwi Yadav. At the same time, the Enforcement Directorate, Income Tax department and Central Bureau of Investigation were activated against Lalu Prasad Yadav’s family members, including Tejashwi. It was to give the impression that the central government was with Nitish against Tejashwi.

Sources in a Bihar BJP faction known to be opposed to Narendra Modi and Amit Shah tell the author that a party MP from the state and a senior BJP Yadav leader from Haryana were drafted as pointsmen to upset Nitish’s applecart.

Many senior Rashtriya Swayamsevak Sangh functionaries too later became part of this plan as it progressed. Chirag’s Lok Janshakti Party pitted its candidates against JD(U)’s. RSS-BJP strategists had hoped that Chirag would win enough seats to let the BJP form its government with the support of LJP and others.

This author’s columns on The Wire too had dwelled on how BJP was using Chirag against Nitish at that time. The 2020 Bihar assembly polls was also the first time in RSS’s history that over 12 of its hardcore cadres contested on a non-BJP party ticket, for the LJP.

However, the ploy didn’t produce desired results. JD(U) was, of course, reduced to 43 MLAs but Chirag’s party lost its existence altogether. The BJP won 74 MLAs but in no way could it have formed a government of its own with the Tejashwi-led alliance of the Rashtriya Janata Dal, Congress and Left parties securing 115 seats.

The BJP accepted Nitish as the chief minister but created a pressure cooker like situation for him. Saffron party mandarins began pushing the issues like the National Register of Citizens and Uniform Civil Code and began openly using an anti-Muslim rhetoric that Nitish would certainly not be fine with. 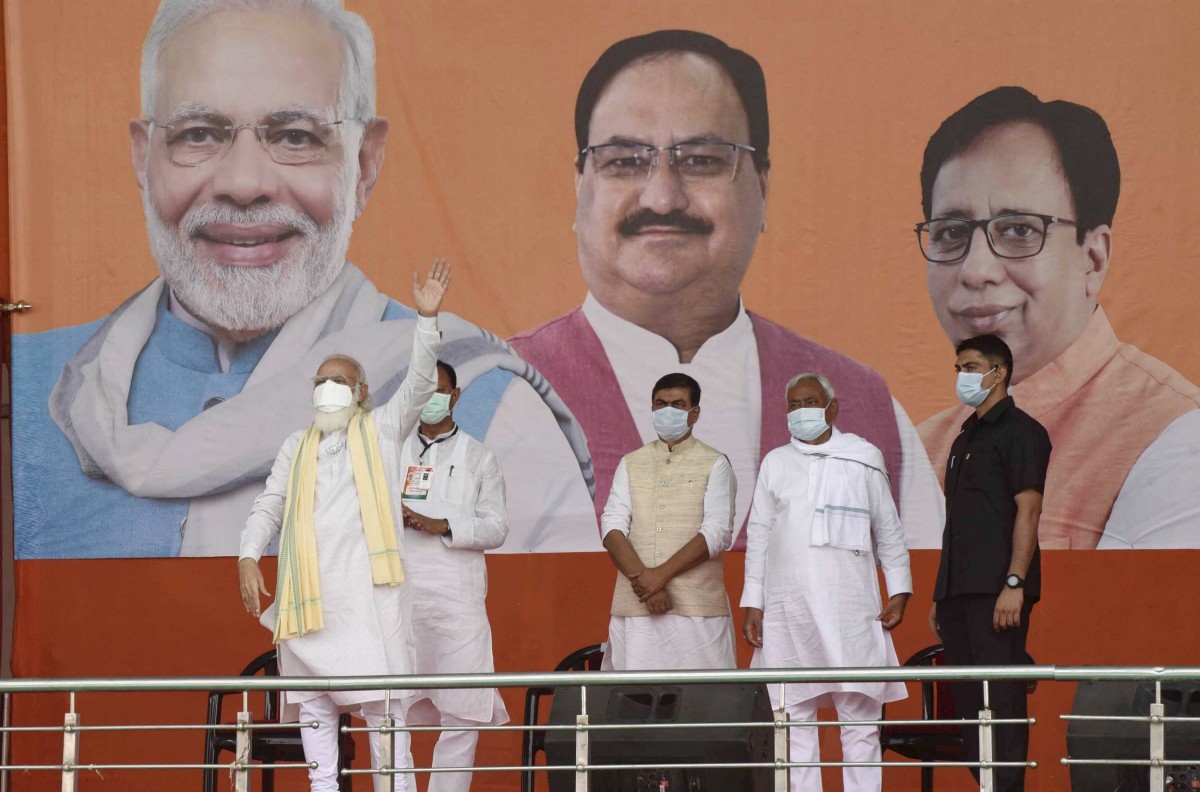 BJP also set to work upon JD(U) MPs in the Lok Sabha and Rajya Sabha. R.C.P Singh became a Union minister and was probably the first among Nitish’s most trusted leaders to begin taking ‘briefs from the BJP bosses,’ according to sources. BJP was believed to have won over another Rajya Sabha MP from JD(U), but that MP is known to keep a low profile.

Sometime in November-December 2021, BJP is learned to have speeded up the process to topple the Uddhav Thackeray government in Maharastra and the Nitish Kumar government in Bihar. It used Eknath Shinde to virtually swallow the Shiv Sena, catching Uddhav Thackeray and even the veteran warhorse and Nationalist Congress Party chief Sharad Pawar off guard. Suddenly, most Shiv Sena MLAs were transported from Mumbai to Guwahati and kept in luxury resorts.

The grapevine has it that they planned a similar operation in Bihar through R.C.P. Singh who was the most trusted lieutenant of Nitish till he was denied a third term in the Rajya Sabha. Even in December 2021 and January 2022, Nitish was purportedly not aware of BJP’s designs.

However, in January-February this year, Nitish got wind of what BJP was doing. Sources say he saw changes in R.C.P. Singh’s behaviour and came to know of BJP ministers’ open rhetoric against Nitish.

“During this time, Prime Minister Narendra Modi and Union home minister Amit Shah expressed their support to Nitish; that possibly kept him in the dark,” said a JD(U) source.

Thus Nitish needed to fight BJP’s machinations as well as Tejashwi’s relentless attacks against him.

In the fit of restlessness, Nitish once shouted at Tejashwi in the assembly and said, “Chup raho…meray bhai saman mitra ke betaa ho, iss liye… (‘Keep quiet, you are the son of a friend who is like my brother, that’s why…’).”

Perhaps Nitish was missing his old pal Lalu more than ever before, especially as he struggled to strike a chord with Tejashwi.

In April 2022, Lalu, who had completed more than half of his prison sentence in the fodder scam cases, got bail. Lalu was and is still ailing. It is hard to know how, but Nitish did manage to communicate with Lalu once the latter was out of jail, it is learnt.

“Nitish ji and Lalu ji don’t talk for too long. But Lalu ji listens to Nitish ji and understands what the latter says and Nitish ji too knows what to say to Lalu ji. They share very different chemistry at a personal level, which is hard to figure out for a third person,” said a top source quoting that he overhead Lalu saying to Nitish, “Tension mat karo…sab theek ho jayega (‘Don’t be tensed, everything will be alright’)”. 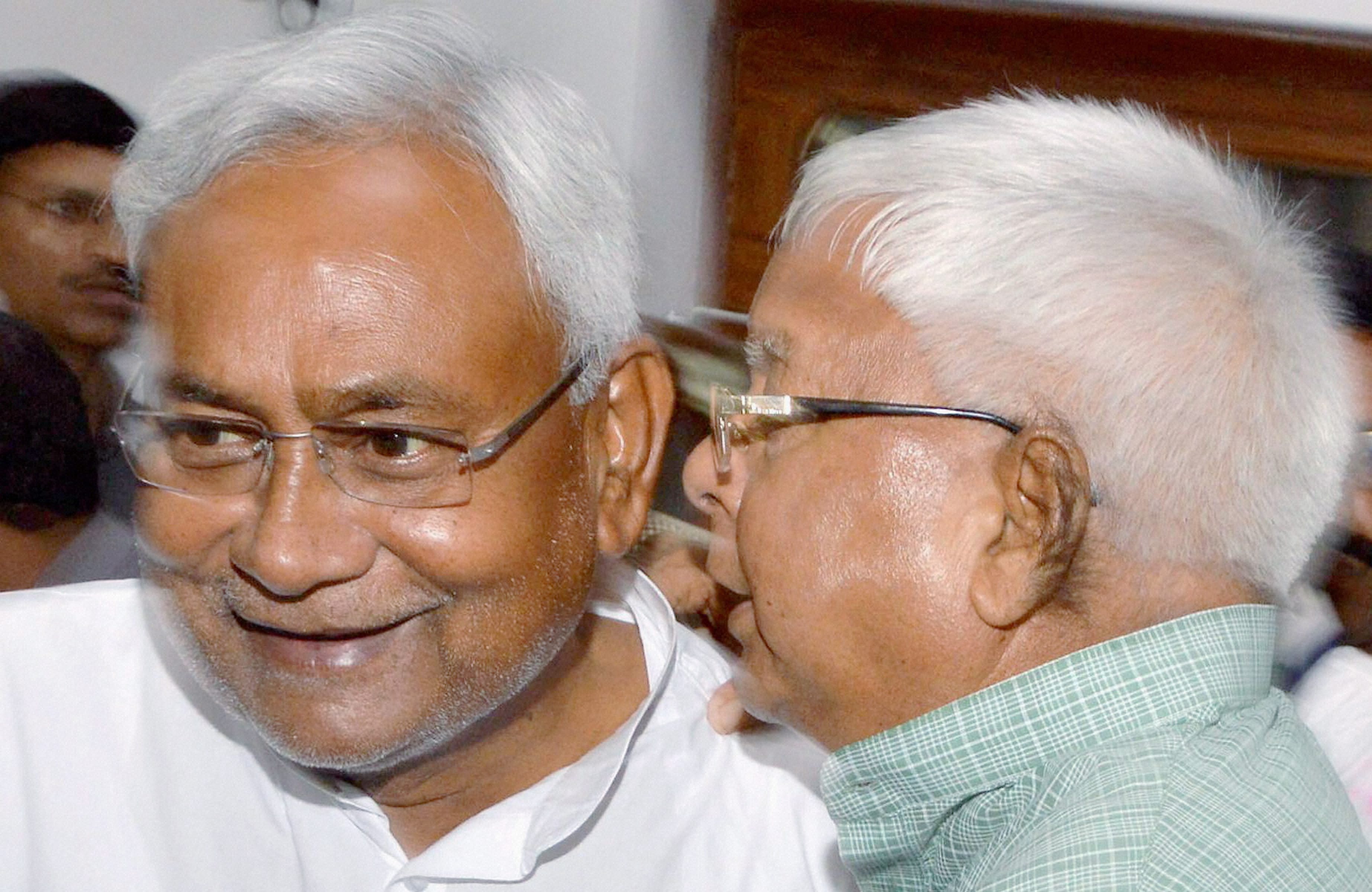 Simultaneous with Nitish talking to Lalu the latter called and counselled Tejashwi to “go by what Nitish says”.

And so it was that Nitish walked to the RJD’s iftar party to be welcomed by Tejashwi. Then Tejashwi went to the JD(U)’s iftar party. The bonhomie between the two grew.

In the meantime, the I-T department and ED carried out raids on Lalu’s 17 establishments and the CBI arrested his aide Bhola Yadav. But by then, the hawk-eyed Nitish, aided by Lalu’s advice, knew how to act.

This time, he had by his side young Tejaswhi, who worked diligently to beat the BJP at its own game.

Nitish dumped the BJP on August 9, surprising the very party which was edging towards a victory of sorts against him.

“Had we not got out of the NDA they [BJP] would have toppled the Nitish government. Thank god Nitish ji acted in the nick of time. The BJP got seven JD(U) MLAs join it in Arunachal Pradesh. It has used different modules to topple the elected governments in Madhya Pradesh, Karnataka, Goa, the northeastern states and Maharashtra. The BJP’s game is infamous as the ‘Operation Lotus’,” JD(U) national party president Lalan Singh told The Wire.

Asked if Nitish has given the BJP a taste of its own medicine, Lalan said, “The BJP has taken the pills that it has itself manufactured.”

The grapevine has it that the old guards around Lalu – known to be more brazen against BJP – and many friends of Nitish’s suggested that he sack BJP ministers and continue with the government with the Mahagathbandhan’s support.

“The BJP can’t be trusted. If you resign, the party might play some dubious game through the governor. Better sack the BJP ministers…there is no need to meet the governor,” a veteran RJD leader who is an old friend of Nitish’s is learned to have told him.

However, Nitish – known for maintaining balance even in bad times – argued back, “I became the chief minister with the support of BJP’s 75 MLAs. It is immoral and unjust to sack the BJP ministers. We have a two-third majority…let me resign and form our government”.

And so it was.