Nitish has always been careful to ensure that his amenable secular conscience does not come at the cost of his government. 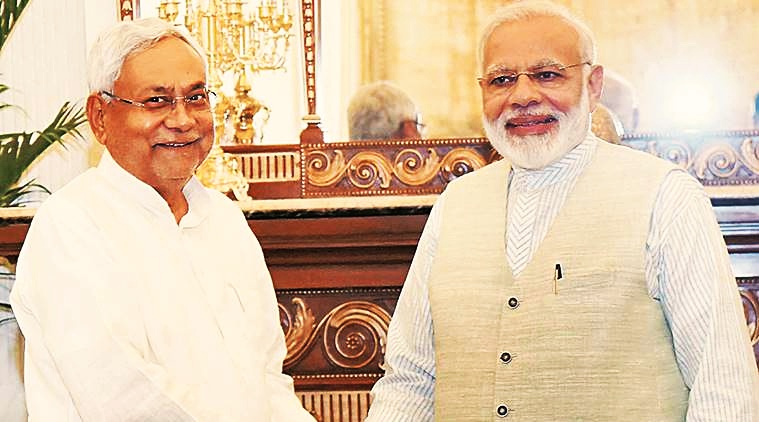 Nitish Kumar’s decision to break away from the mahagatbandhan and form a government with the BJP instead is a political betrayal of a Himalayan kind. The 2015 Bihar mandate was a decisive rejection of the BJP’s politics – recognised as communal and hostile to social justice. Moreover, it was a mandate in which the RJD emerged the strongest of the mahagatbandhan partners. Nitish himself broke his over decade-long alliance with the BJP in 2013, astutely judging that such an alliance could cost him his re-election. For him to now foist a JD(U)-BJP government on the state – as if such a decision was his to make rather than that of Bihar’s – displays supreme arrogant contempt for the people of the state.

The anti-corruption pretext is transparently a dishonest one. Long before the CBI raided the premises of Lalu Prasad Yadav and Tejashwi Yadav, Nitish had already begun flirting with the NDA. First, he chose to support demonetisation. And then he declared support for the NDA nominee Ram Nath Kovind for president. If Nitish’s decision to jettison the mahagatbandhan were really moved by his upright anti-corruption concerns, the honourable thing to do on resigning from the post of chief minister would have been to allow for fresh elections, showing his willingness to sacrifice power for the sake of principles. Instead, he lost no time in putting his pre-arranged marriage with the BJP in place within hours of divorcing the mahagatbandhan with RJD and the Congress.

BJP, JD(U)’s  systemic corruption not a concern for Nitish

It was obvious that Nitishs’ deal with the BJP was in the making long before the corruption allegations against Tejashwi became an issue. But the RJD’s refusal to countenance the resignation of Tejashwi also bears a degree of political responsibility in allowing Nitish the opportunity to camouflage his betrayal as a concern for corruption.

The allegations against Tejashwi and Lalu are serious enough, pertaining to the individual accumulation of illegal assets, and certainly deserve a thorough investigation and action. But there are other issues of systemic corruption – such as those pertaining to the topper scam and other educational scams – that have dogged Nitish’s government in Bihar, and in which some JD(U) leaders are implicated.

Also read: For Nitish Kumar, Allying With the BJP is Simply Ghar Wapsi

BJP governments at the Centre and state are also implicated in serious systemic scams, such as the Vyapam scam, railway catering scam, crony capitalist decisions benefiting individual corporates and so on. Moreover, there are serious criminal charges pending against central ministers in the BJP, including Uma Bharti, UP chief minister Adityanath and his deputy Keshav Prasad Maurya. Why does Nitish’s conscience not trouble him when it comes to these scams that taint his own party and government? Why does Narendra Modi not expect Shivraj Singh Chouhan to resign over the Vyapam scam (which also includes a series of suspected murders besides corruption) to further the “fight against corruption”? How can Modi and Nitish congratulate each other on being newfound allies in the “fight against corruption” when they are complicit in condoning huge instances of systemic corruption and crime that are certainly of a politically more serious nature than that of individual corruption.

As Union rail minister inaugurating a railway project in Gujarat, Nitish had said, “I am fully hopeful that Narendrabhai will not remain confined to Gujarat for long, the country will benefit from his services.” In 2009, he and Modi had clasped hands and held them aloft at a function in Punjab. From 2005-2013, Nitish had no trouble allying with the BJP in Bihar, thus creating a conducive and fertile ground for the growth and consolidation of the BJP’s communal and feudal agenda in Bihar. In all those years, Nitish’s government represented an uneasy and barely viable social balance – wooing the extremely oppressed mahadalits and rural poor with the promises of land reform while appeasing the feudal mass-base that the JD(U) and BJP shared.

But in 2013, this social balancing act began to wobble, with a widespread sense of anger among the poor about Nitish’s betrayal of his promises of land reform and social reform, serial acquittals of massacre-accused men and instances of corruption and police repression. Right on cue, Nitish’s conscience awoke and he broke with the BJP, declaring that his commitment to secularism would not allow him to accept Modi as a prime ministerial candidate. Why did Nitish’s “secular” conscience, which was able to suggest a national role for Modi in 2003 immediately after the 2002 Gujarat riots, baulk at him being declared the BJP’s prime ministerial candidate a decade later? No doubt what tilted the balance for this amenable and flexible conscience was the shrewd calculation sticking to the BJP and failing to embrace a new political script was likely to jeopardise his re-election in 2015, and that a break with the BJP could be an effective and timely remedy for anti-incumbency. Even in 2013, it must be remembered, that Nitish was careful to ensure that his discovery of a secular conscience did not come at any cost to his government.

Similarly, Nitish made an “emotional” decision to step down and replace himself with Jitan Ram Manjhi as chief minister of Bihar following the JD(U)’s poor performance in the 2014 Lok Sabha polls – only for his emotions to reconcile him to come back to replace Manjhi again in 2015.

Also read: Nitish Kumar Has Set in Motion the BJP’s Grand Political Project for 2019 and Beyond

And now, of course, Kumar’s conscience has outdone its previous feats and performed a sort of Produnova of political somersaults – by shedding his ‘saviour of secularism’ avatar for a return to the cozy embrace of the BJP. The serial lynchings, attacks on freedom of expression and an undeclared Emergency do not cause Nitish’s heart to miss so much as a beat.

In the wake of the heady 2015 victory, many Indians saw in Nitish and the mahagatbandhan model the only viable secular opposition to the Modi juggernaut. Nitish enthusiasts even questioned why the Left contested independently in 2015 instead of supporting the mahagatbandhan in the interests of defeating the BJP. Nitish too, perhaps seeing himself in the role of the prime ministerial candidate in 2019, began to speak of a ‘Sangh-mukt Bharat’ and to lecture other forces on the need for the opposition to unite and forge its own independent agenda rather than react to an agenda set by the BJP. But as always, he did not keep all his eggs in the ‘secular’ basket; by supporting the note ban, he kept one hand extended cautiously towards the BJP as well. And then the outcome of the Uttar Pradesh elections changed the political climate – pointing to an unprecedented hegemony enjoyed by the BJP and Modi. Now, some are blaming Nitish’s exit on the the Congress’ failure to set an inspiring alternate agenda for the opposition. The question though ought to be: What alternate opposition agenda did Nitish himself set, and how does joining hands with the BJP further any opposition agenda?

Can the country’s secular citizens afford to rely on leaders and parties with a wind vane of a “conscience” that decides whether to turn towards or away from the “secular” agenda depending on where the winds are favourable? From the United Front days, such alliances – cobbled up in the name of “defending secularism”, but comprising key leaders (such as Chandrababu Naidu or Nitish) who, overnight, discover that they can after all sup at the BJP table if it looks like it might be winning – have helped associate secularism with political opportunism in the public imagination.

Instead of being demoralised by Nitish’s shameless volte face, genuine and committed democratic and secular people of Bihar must punish him for his barefaced betrayal of the 2015 mandate. Energies of public spirited people and movements – in Bihar and across India – have to be focused on building a robust and principled resistance to each and every policy that attacks the rights of farmers, workers, women and minorities; and a sustained campaign against the climate of hate-mongering being fostered by the Sangh parivar and the BJP.

The old NDA government in Bihar headed by Nitish had implemented the BJP agenda – scrapping the Amir Das commission just before it was due to submit its report into the political linkages of the Ranvir Sena, jettisoning the Land Reforms Commission recommendations, and allowing the Ranvir Sena a free hand to run amok and attack Dalits in the wake of its chief Brahmeshwar Singh’s death. This time the NDA government in Bihar will unmistakably be a BJP government led by a puppet Nitish, since he can remain chief minister only at the BJP’s mercy and there is a Modi government at the Centre. It is the people of Bihar – the powerful traditions of Left and socialist movements, and the organised struggles of the rural poor and other sections of fighting people – who must step up to the task and offer the new regime a fitting resistance.

Kavita Krishnan is secretary of the All India Progressive Women’s Association (AIPWA).