Trust deficit like this across the political spectrum is something that Kumar probably has never faced in his entire career. 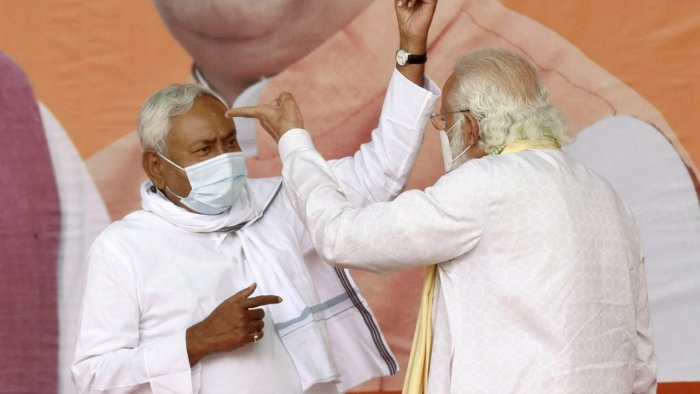 New Delhi: Bihar’s chief minister and Janata Dal (United) supremo Nitish Kumar is standing at one of the biggest crossroads in his political career.

Despite having witnessed his ally, the Bharatiya Janata Party, running roughshod over its smaller allies in both Bihar and other states, Kumar could still hold his own in the government – largely because of the unwavering support he enjoyed among the economically backward classes, extremely marginalised Dalits known as Mahadalits in the state, Pashmanda Muslims in many pockets, and a large section of women.

After having ditched the Rashtriya Janata Dal in 2017, two years after the RJD-JD(U) combine secured a thumping victory in the 2015 assembly elections, Kumar could swiftly switch sides to form a government with the support of the BJP. Throughout his political career, he ensured that he remained the most accepted political face in the state, even as both the BJP and RJD induced polarising opinions from the people.

With his alliance with the BJP showing signs of breaking apart now, several questions emerge. Can Kumar still leverage his position to remain in power? Will the RJD be able to put its trust in Kumar once again, if the latter approaches it in the days to come? And, more crucially, will the BJP, ever-keen to come out of Kumar’s shadow in the state, be willing to go the whole hog and upset the political status quo to fulfil its own ambitions?

Trust deficit like this across the political spectrum is something that Kumar probably has never faced in his entire career. Despite switching sides, stitching unnatural alliances and conjuring up new political formulations as the chief minister to alter caste and community equations in the state, Kumar’s ideologically flexible approach put him in good stead and helped him remain in power for nearly two decades. Both the RJD and BJP know that Kumar is the single most significant factor to hold the strings of power in Bihar.

Even his critics would agree that he manoeuvred through the web of alliances with self-contained pride, and nurtured his passive-aggressive style into one of his biggest strengths as a national leader.

Yet, an eager Narendra Modi-led BJP has undermined Kumar’s leadership from time to time, especially since it emerged as the larger of the two partners in the 2020 assembly polls. The latest crisis in the Bihar government – creating speculation on a possible break-up between the two – is a reflection of the bitter relationship that was showing signs of escalation for months now.

A series of events in recent months have been signalling a continuous tug-of-war between the BJP and Kumar. A range of BJP leaders, including the party’s state president Sanjay Jaiswal, on multiple occasions gave critical statements against the Bihar government and JD(U) at Kumar’s slightest effort to contain discontent against Centre’s policies. At the same time, several ministerial aspirants among BJP legislators have not left a single window to hit out at the Nitish Kumar government.

Cabinet berths in the state government kept emerging as a point of friction. It was clear that BJP as a larger party couldn’t prevent itself from asserting its weight on its own coalition government. So much was Kumar under BJP’s shadow that even his courteous gesture of bowing and greeting Modi at the oath-taking ceremony for Uttar Pradesh chief minister Adityanath was interpreted as the JD(U) chief’s surrender.

However, it was the chief minister’s outburst in the assembly against the speaker Vijay Kumar Sinha’s style of functioning that left no doubt about Nitish’s growing impatience with the alliance. That was early this year, in March. Since then, Nitish aired his view that the Agnipath scheme to recruit temporary soldiers should be “reconsidered”. He disagreed with Modi when in one of his responses he said that the “one nation, one election” may be a good idea but “not implementable”. He was the first in the National Democratic Alliance to declare that Bihar will hold a caste census, even when the BJP has shown hesitation.

Matters came to a head when the BJP allegedly attempted to pitch former IAS-turned Rajya Sabha MP R.C.P. Singh against Kumar. Singh, considered until recently to be one of Kumar’s closest aides, had joined the Modi 2.0 cabinet as the Union steel minister, and since then had grown close to the BJP. The former national president of JD(U) who has been a Rajya Sabha member since 2010, Singh could not secure his third term because of Nitish and Modi drifting apart. JD(U) replaced him with Kheeru Mahato in the Upper House, because of which Singh had to give up his Union ministry. Following Singh’s exit, JD(U) restored its original decision of not joining the Modi cabinet at all, leading to further strains between Kumar and the BJP.

The attempted poaching of Singh with the assent from the BJP’s top leadership is what rattled Kumar the most, Patna-based political observers believe. Since then, Kumar has been firing one salvo after another.

Kumar’s absence in the NITI Aayog meeting chaired by the prime minister in Delhi was the fourth such meeting of the Centre’s which the chief minister preferred to skip in the last few months. Recently, he stayed away from both the oath-taking ceremony of newly-elected President Droupadi Murmu and the farewell dinner for outgoing President Ram Nath Kovind.

Last month, Kumar had also decided to depute the state’s deputy chief minister Tarakishor Prasad to a meeting of the chief ministers called by Union home minister Amit Shah to discuss issues related to the national flag. Kishore could not attend as the Centre made it clear that the meeting was only for chief ministers.

Party sources have indicated to reporters that Kumar wants the speaker and the BJP state president removed from their positions, as much as he wants a greater say in deciding cabinet positions. However, the BJP doesn’t seem to be relenting, although its top leadership has taken care not to open another battlefront with Kumar just yet.

The current crisis was triggered by Singh’s resignation from the JD(U) after a bitter spat. On Saturday, the JD(U) questioned Singh’s land deals and alleged his family’s involvement in the irregular purchase of at least 47 plots of land in Nalanda between 2013 and 2022. An affronted Singh resigned immediately and attributed the accusation as borne out of Kumar’s jealousy.

Responding to the development, JD(U) president Rajiv Ranjan alias Lalan Singh claimed that BJP’s secret hand was responsible for the crisis in JD (U). He attributed JD(U)’s poor performance in 2020 assembly elections to a “conspiracy” through Chirag Paswan, who had opened a separate front against Kumar by fielding his candidates against all JD(U) candidates. Paswan was ousted from the NDA months after the assembly polls, when a majority of his party’s MPs under the aegis of his uncle Pashupati Kumar Paras pulled off a coup. The BJP embraced Paras and appointed him as a Union minister in July 2021.

“The Chirag Model” is sought to be implemented again through Singh this time, the JD(U) president said, in what was evidently an attack on the BJP.

The acrimony between Singh and Kumar since the former’s ministerial stint came to a close has been such that his resignation barely came as a surprise. However, Singh’s sharp aim at Kumar even while resigning surely points out that the BJP-JD(U) coalition may as well be on the verge of collapse.

Patna-based political analyst Mahendra Suman believes that the rivalry between the two allies runs deep. “The BJP can only expand in the state by getting a grip over non-Yadav backward communities and Dalits – social constituencies in which Kumar is considered the tallest leader. Over the last few years, BJP had advanced its ideology of Hindutva by working amongst these sections of population across the country. In Bihar, however, Nitish is the biggest roadblock in its expansion plans. The BJP, which has emerged as numerically stronger in the assembly, is not ready to take it lying down,” he said.

He added that a good majority of the BJP’s office-bearers in the state – be it the deputy chief ministers or state ministers or even position holders in the party – belong to communities which are considered to be Kumar’s stronghold. The saffron party has sidelined the old BJP leadership like Sushil Kumar Modi, Nand Kishore Yadav or Prem Kumar and has created new leadership by representing leaders from underrepresented communities in different positions, the latest example of which is the nomination of the little-known 40-year-old OBC Kurmi political worker Shambhu Sharan Patel for the Rajya Sabha.

The seasoned politician that Kumar is, he is bound to see these expansionary moves by the BJP as poaching that is not targeted solely at leaders like Singh. The re-emergence of the RJD as a potent opposition force and the single-largest party in the state assembly may have only prompted Kumar to worry about his diminishing significance in the state polity.

Yet, when the chief minister will lead his legislative party meeting to take a final decision on JD(U)’s alliance with the BJP on Tuesday, he will have much on his mind.

Says senior journalist Nalin Verma, “Nitish is caught in a bind. His relationship with the BJP has already been stained. There is no going back from here. However, he is also aware that his MPs attribute their victories to Modi to a great extent, and that JD(U)’s victory or losses in the 2024 Lok Sabha polls will depend heavily on the Modi factor.

“At the same time, the 2020 assembly polls threw up a result that was hugely skewed in BJP’s favour. The JD(U) with only 43 MLAs in the assembly is constantly at a risk of defections. In fact, it will be very easy for the resourceful BJP to engineer a round of defections among those JD(U) legislators who belong to upper castes,” he added.

All such aspects, and more, will rein in Kumar before he takes a decision. For the BJP, parting with Kumar may only be a minor hiccup as it will find its much-awaited window to establish its independence ahead of the 2024 Lok Sabha polls. For the JD(U), however, any firm decision by Kumar can alter its future political course. The BJP, perhaps, is attempting to beat Kumar in his own Machiavellian game. It remains to be seen whether Kumar swallows his pride again or treats the latest crisis as the final nail in the coffin.