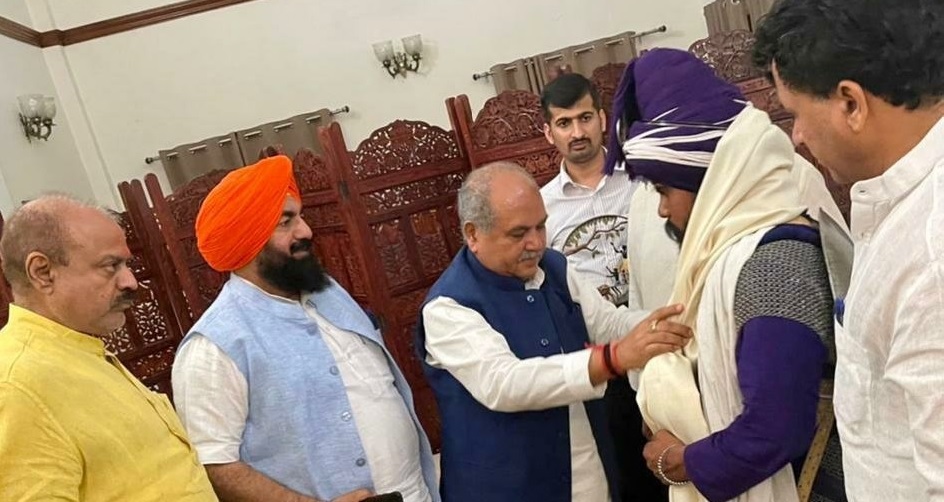 Jalandhar: Three days after the photos of Baba Aman Singh — the head of the Nihang sect whose members have been arrested for the gruesome Singhu border killing — with Union agriculture minister Narendra Singh Tomar, Bharatiya Janata Party (BJP) leader Sukhminderpal Singh Grewal and dismissed Punjab Police cop Gurmeet Singh Pinky went viral on social media, the Nihang groups on Thursday disassociated themselves with him and demanded that the police probe his meeting with the party leaders.

Raja Raj Singh, the head of the Nihang group Tarna Dal, flanked by other group members at the Singhu border, said: “We want to announce that from today onwards we have got nothing to do with Aman Singh. Whatever he did (meeting with BJP leaders), police should question him. Police should beat him up with sticks and ask what he was doing with the BJP leaders. Neither did he inform Nihang Baba Maan Singh, who heads the Shiromani Panth Akali Budha Dal, nor did he inform any of us (about his meeting with Tomar and BJP leaders). However, we support the Nihangs who killed Lakhbir Singh, as he desecrated the Sikh scripture, and will provide him with legal aid,” he said.

He also said that whatever Aman Singh was saying, it was all a lie. “An inquiry should be held. We are with the police in this case. We challenge you to prove whether we (six Nihang groups) ever met any minister. We also want to clarify that all of us are clear-hearted people. And if people found us guilty of hatching a conspiracy with the BJP or being involved in the sacrilege case which took place at the Singhu border, they may cut us into pieces and throw us to the dogs.”

The Wire had reported on October 19 that the Nihang groups will boycott Aman Singh if he is found to have “hobnobbed” with BJP leaders.

On yet another viral video under investigation by the Haryana Police, where the deceased Lakhbir Singh was seen admitting that Rs 30,000 was offered to 20 persons (without mentioning why was it given to them), he said: “How do we know where are those persons? But I want to say one thing, that all of us should remain vigilant wherever Guru Granth Sahib is kept. This is a big conspiracy to derail the farmers’ protest through sacrilege and to instigate people. The government is doing this to divert public attention from the Lakhimpur Kheri incident,” he added.

However, responding to allegations that the Nihangs were getting defamed, Baba Aman Singh, who too was present at the spot, said, “We will clear everything.”

Nihang Baba Maan Singh, head of the Shiromani Panth Akali Budha Dal, along with his group members, announced: “Today, we held a meeting, where it was decided that we are disassociating ourselves from Baba Aman Singh. We want to inform Sikh bodies, farmers’ unions, officials and the government that Budha Dal is not associated with Aman Singh. Please don’t use our group’s name with him.”

Another Nihang member of Aman Singh’s group indulges in violence

Notably, another incident of a Nihang beating up a vendor at the Singhu border also came to the fore on Thursday morning. He too turned out to be a member of Baba Aman Singh’s Nihang group. His group has claimed responsibility for killing Lakhbir Singh over the sacrilege issue at the Singhu border on October 15.

Naveen Sandhu, a resident of Gagsina village, Karnal district, Haryana, allegedly broke the leg of an egg seller because he said that he had no eggs available, and he was smoking near their camp. Following this, fellow Nihangs handed over Sandhu to the Kundli Police. The video of this incident went viral on social media, once again raising questions over violence by the members of Aman Singh’s group.

However, immediately after the incident, Bharatiya Kisan Union (BKU) Karnal president Jagdeep Aulakh shared a video message saying that Sandhu became a Nihang on Baisakhi this year i.e. on April 13. “People should avoid jumping to conclusions. As he joined recently, his hair is short and not long as per Sikh religious tenets and he cannot speak Punjabi because he hails from Haryana. But he has been actively involved with the farmers’ protest since the beginning. We are in touch with station house officer Kundli in this case,” he said.

Aman Singh’s parents had disowned him in 2018

It was learnt that Aman Singh’s parents had disowned him and issued an advertisement in this regard in a Punjabi newspaper on April 17, 2018. Aman Singh hails from Babbanpur village under Dhuri sub-division of Sangrur district.

As Punjab deputy chief minister Sukhjinder Singh Randhawa constituted a Special Investigation Team (SIT) on October 20 to probe the Singhu border killing, it came to light that Aman Singh’s parents were living in a pitiable condition in the village.

His parents entered the picture after the Punjab Police reached their village to investigate. While Aman Singh’s father Gian Singh (60) is a cancer patient, his mother Karamjit Kaur also remains ill. Aman’s parents were living in someone else’s house in the village and even their treatment was at the mercy of funds collected by villagers.

His elderly parents said that they have got nothing to do with Aman Singh and pleaded that the Punjab Police should not harass them. They also said that the Singhu border killing was unfortunate and it should be investigated.

Aman Singh was wanted in an NDPS Act case of 2018 registered at Mahal Kalan police station, Barnala district in which he got bail from Punjab and Haryana high court.

Meanwhile, in an interview to a Punjabi channel TV Punjab, Gurmeet Singh ‘Pinky’ claimed that he went to meet N.S. Tomar through his friend BJP leader Sukhminder Singh Grewal. Pinky shared in the interview that he went to talk about his gallantry medal, which the Union government had withdrawn in 2017.

Pinky said that they went to Delhi via the Singhu border, where Nihang Aman Singh joined them. “I don’t know what all Aman Singh discussed with the minister. I am being falsely implicated in this case. I’ll also probe this matter on my own and hold a press conference within a couple of days,” he added.