A reverse image search performed by The Wire threw up a 2019 tweet by Subhas Chandra Bose's relative Chandra Kumar Bose, who shared a black-and-white photo upon which the portrait is based.

Portrait unveiled by President Ram Nath Kovind is based on the photo of Netaji Subhas Chandra Bose (on the right). Illustration: The Wire

New Delhi: A portrait unveiled by President Ram Nath Kovind on January 23 to commemorate Netaji Subhas Chandra Bose’s 125th birth anniversary resulted in a storm in a teacup, after several social media users, high-profile politicians and media articles speculated that it was a photo of a Bengali actor and not the iconic freedom fighter.

While President Kovind had unveiled the portrait on Saturday, some social media users on Monday claimed that it was a photo of actor Prosenjit Chatterjee in character as Bose in the 2019 Bengali movie Gumnaami.

Soon, several journalists, Trinamool Congress MP Mahua Moitra and others also claimed that the portrait was not of Bose, but of Chatterjee’s character. 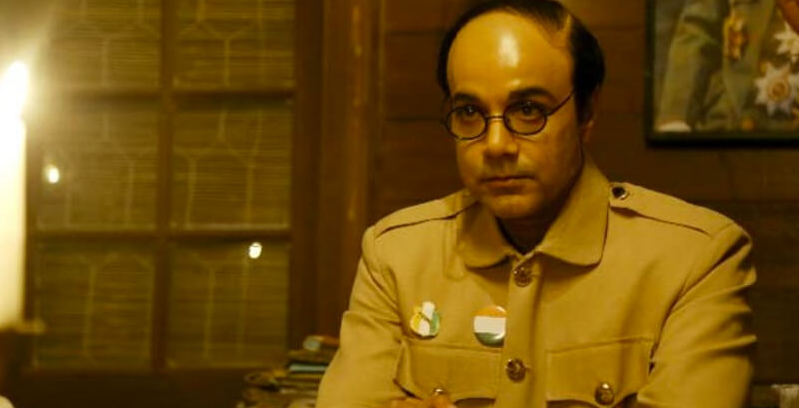 Prosenjit Chatterjee as Subhas Chandra Bose in the 2019 movie ‘Gumnaami’.

To verify if the portrait was of Bose or Chatterjee, The Wire performed a reverse image search of the portrait unveiled by President Kovind on the website Yandex.

Also read: As Modi, Mamata Battle Over Netaji’s Legacy, a Look at His Thoughts on India and Communalism

The search threw up a similar image in black and white, hosted on a website called Twigzu, which allows people to browse and download Twitter’s public content. Another reverse image of the black and white photo led The Wire to a tweet by Chandra Kumar Bose, the BJP leader who is the grand-nephew of Subhas Chandra Bose. The tweet was posted by Chandra Kumar Bose in December 2019.

Netaji said regarding the nature of patriotism& Indian nationalism – “All those who have accepted India as their motherland or all those who have made India their permanent home are my brothers.Temple of Lord Jagannath in Puri and the Taj Mahal are equally objects of my pride.” pic.twitter.com/48qRWsxYB7

A comparison makes it apparent that the portrait is based on the photograph of Bose, and is not based on Prosenjit Chatterjee.

Portrait unveiled by President Ram Nath Kovind is based on the photo of Netaji Subhas Chandra Bose (on the right). Illustration: The Wire

As the controversy raged on, Chandra Kumar Bose also clarified that the portrait, which was made by renowned artist Paresh Maity, was based on the same black and white photo he had tweeted in Decemberrashtra 2019.

This is the original photograph of #NetajiSubhasChandraBose, based on which renowned artist Shri #PareshMaity has drawn the portrait which was unveiled at Rashtrapati Bhavan on 23 Jan 2021, by Hon’ble President of India-Shri Ram Nath Kovind ji. @rashtrapatibhvn @narendramodi pic.twitter.com/WTOHqtgs3p