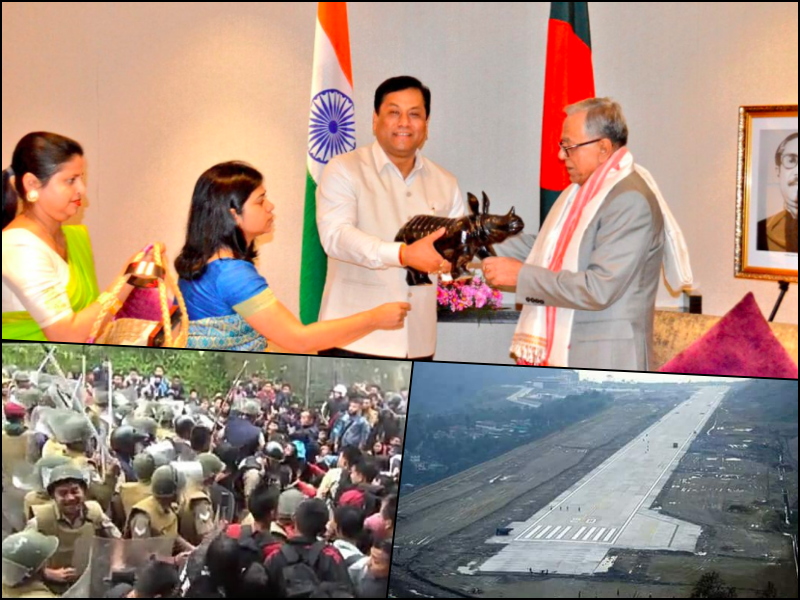 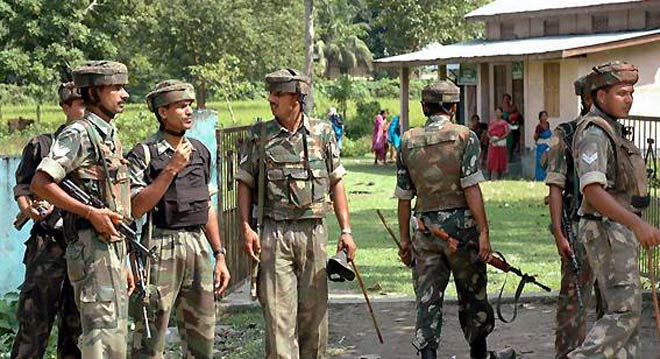 Violence was reported from along the Mizoram-Assam border on March 8, which left several injured, including three journalists reporting the incident.

According to media reports coming from Mizoram’s Kolasib district, Assam Police men resorted to lathi charge on hundreds of supporters of Mizo Zirlai Pawl (MZP) – the apex body of students in Mizoram – who reached Zophai in the district’s Bairabi area to reconstruct a shed built by the organisation a few days ago at a site which the Assam government claims to be inside its boundary.

Prohibitory orders have been clamped on the area to stop the violence from escalating.

On March 7, in a letter to Mizoram chief secretary, the additional chief secretary of Assam T.Y. Das wrote that “information (has been) received that a large number of persons of Mizo Youth organisation namely MZP have planned to enter within the boundary of Hailakandi district (of Assam) at Kachurthal with the intention to erect some permanent structure including a church within Assam. Report has also been received that a signboard was noticed on February 27 besides the NH-154 at Kachurthal area under Ramnathpur police station of Hailakandi district in the name of MZP and it was written as ‘Site for Zofate Chawlbhuk’ and beneath the signboard there was a makeshift bench of wooden structure.” 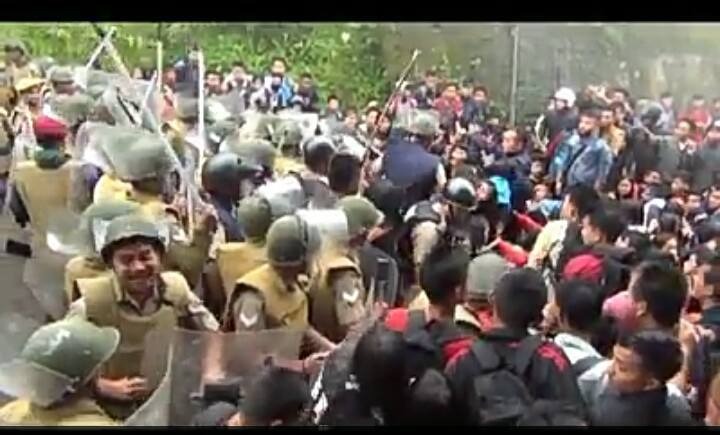 Requesting the state government to “sensitise and pass necessary instruction to the district commissioner, to stop members of MZP not to encroach within the land of Assam as any confrontation may lead to serious interstate tension”, the letter further added, “The matter has been discussed over telephone by the district magistrate of Hailakandi with his counterpart of Kolasib district of Mizoram with a request to stop any such attempt.”

The structure was reportedly demolished by the Assam Police and state forest department soon after it was constructed. The MZP, in a meeting in Aizawl, decided to reconstruct it on the same site on March 9. On reaching the spot with hundreds of supporters, the policemen already posted in the area reportedly resorted to lathi charge after failing to control them.

According to an MZP supporter present at the site, “More than 20 persons were injured and taken to Bairabi public health centre for medical aid. The injured included six journalists from Aizawl even though they showed their press cards to the police.” The Mizoram Journalists Association has demanded compensation from the state government for being “victims of police brutality”.

In a press note, the Assam government said: “Around 50 activists of various organisations carrying machetes, daggers and other weapons pelted stones at the police personnel and paramilitary forces prompting the lathi charge.”

MZP president L. Ramdinlina Renthlei told local reporters that the organisation’s members reached the spot with the intention of constructing a building on a land owned by the family of Ch. Chhunga, the first chief minister of Mizoram, which was donated to the organisation.

The border dispute between the two states is long drawn. The Hailakandi district has seen tension several times before.

As per latest reports coming from Aizawl, Assam Police resorted to firing in the border area on March 10 as many MZP supporters assembled in the morning and began a protest by violating the prohibitory orders. Two persons, including a senior functionary of MZP, have received bullet injuries and have been admitted to a hospital.

Reports of journalists injured in police baton charge have also come. Mizoram chief minister Lal Thanhawla has called an emergency meeting of all parties and civil society groups in the state capital.

Bangladesh President Mohammad Abdul Hamid is on a three-day goodwill visit to Assam and Meghalaya, which share a border with the country.

On March 8, speaking at a dinner hosted by Assam chief minister Sarbananda Sonowal, President Hamid called India its “most trusted neighbour” and talked about that country’s longstanding relations with Assam. He recalled his days spent in Assam and Meghalaya during the Bangladesh Liberation War and referred to the support and shelter provided to around one million people in 45 camps set up in the then undivided Assam. 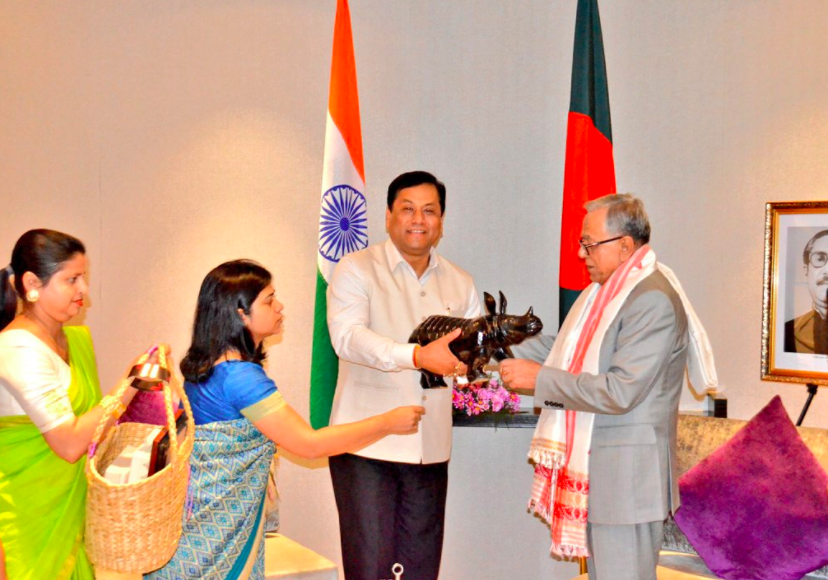 Calling the relation between Assam-Bangladesh as a special one “rooted in common culture, heritage, literature and language,” Sonowal “appreciated the cooperation extended by the government of Bangladesh to the India government in marginalising insurgency activities in the Northeast”.

Glad to welcome Hon’ble President of Bangladesh, Md. Abdul Hamid to Guwahati as we stress upon connectivity & joint progress. pic.twitter.com/cvrR8q6kR9

On March 9, the president arrived in Meghalaya where he visited the border town of Balat. It was in Balat that he had set up a youth camp during the 1971 war. Besides, the visiting dignitary also had a stopover at the houses of former West Bengal chief minister Bidhan Chandra Roy and Sidli House where Rabindranath Tagore stayed during his visit to Shillong in 1927. The president will also meet the newly sworn in chief minister Conrad Sangma and stayed the night at the Raj Bhavan before leaving for New Delhi.

On a five-day visit to India, President Hamid is in New Delhi to attend the International Solar Alliance summit on March 11.

The newly-constructed Pakyong Airport in Sikkim registered the first landing of an aircraft, sending out clear signals that it is ready for a formal launch.

According to local reports, an Indian Air Force aircraft – a fixed wing 19-seater Dornier 228 – landed at the airport on March 5. Quoting the Airport Authority of India (AAI) and the Directorate General of Civil Aviation officials, the media reports said several trial low passes were made over the runaway on February 28 prior to the March 5 landing and “all the systems worked well”. 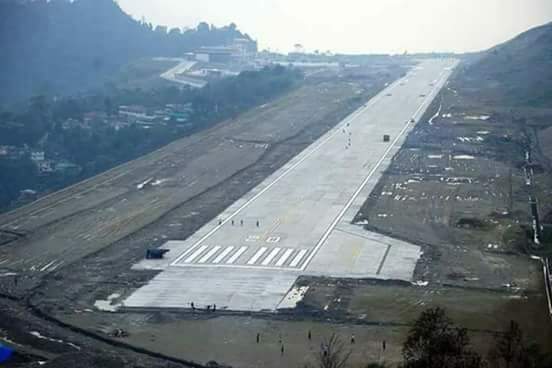 On March 8, speaking at the assembly, state chief minister Pawan Kumar Chamling said, “The airport is ready now and will be operational soon”. He said, on March 10, the commercial airliner, SpiceJet, “is scheduled to land one of its flights at the airport and the AAI will thereafter be in a position to decide on making the airport operational for commercial flights.”

A greenfield project, the airport situated about 35 kms from capital Gangtok, was constructed at the cost of Rs 605 crores in nine years’ time. It is likely to ply flights to Delhi, Kolkata and Guwahati. Presently, the nearest airport to Sikkim is the Bagdogra airport, situated 124 kms away in neighbouring West Bengal.