That BJP has brought one of its arch enemies into the fold proves just how serious it is about its intention to win every election – from panchayat to parliament. 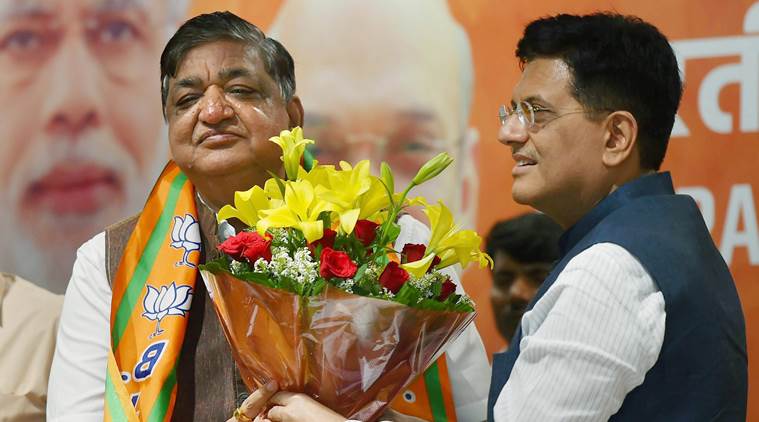 New Delhi: Days after senior Samajwadi Party (SP) leader, Naresh Chandra Agrawal, was denied a Rajya Sabha ticket, he joined the Bharatiya Janata Party (BJP) in New Delhi on Monday. His defection from SP is being seen as a significant political development in Uttar Pradesh, especially with the upcoming Rajya Sabha election in the state.

SP, which has only 47 MLAs in the state assembly, is in a position to get only one of its candidates elected to the upper house. It preferred Bollywood actor Jaya Bachchan, as its candidate over Agrawal. This had ruffled a few feathers in the party as Agrawal is known as a close aide of senior SP leader Ram Gopal Yadav and party president Akhilesh Yadav’s uncle. In the intra-party battle that had garnered a lot of attention last year, Agrawal was seen supporting Ram Gopal and Akhilesh against Mulayam Singh Yadav and his brother Shivpal Yadav.

Now, with Akhilesh’s supremacy in the party, Agrawal was expecting yet another term in the Rajya Sabha but was only shown a cold shoulder.

Agrawal is known is UP for two reasons. One, barring the communists, he was a part of all the three major parties in the state. In his four-decade long political career, he started out as a Congress MLA, taking off from his father S.C. Agrawal’s Congress background.

When BJP’s Kalyan Singh government direly needed to prove its majority to stay in power in 1997, Agrawal and his associates formed the Akhil Bharatiya Loktantrik Congress party (ABLCP) and came to the saffron party’s rescue. He served as a minister in both Kalyan Singh’s and Rajnath Singh’s governments in UP, without formally joining the BJP. Later, when Mayawati became the chief minister from 2007-2012, he shifted to the Bahujan Samaj Party and served as a minister in the state cabinet. And when SP came to power in 2012, he switched sides again, this time to represent SP in the Rajya Sabha.

In his long political career, he was also known for often courting controversy through politically-sensitive statements. For instance, last year, the BJP had made a huge hue and cry about Agrawal’s remarks about allegedly equating Hindu gods with brands of liquor when he tried to convey that BJP was trying to politicise Lord Ram.

Similarly, the saffron party also took exception to Agrawal’s statements about Kulbhushan Jadhav, who is lodged in Pakistan’s prison on espionage charges, or when he alleged that Jammu and Kashmir’s chief minister Mehbooba Mufti was hand-in-glove with separatists.

More recently, in one of his speeches last month, Agrawal referred to Prime Minister Narendra Modi’s caste in trying to put him down. This drew a lot of ire from BJP’s rank and file in UP.

Likewise, his views on gender issues have also been criticised as sexist. In 2014, he has appealed to women to take special care about what they wear in public, in effect, telling them to stay away from western clothes to escape the vile attention of men. Then, he had hinted at the girls being complicit with the rapists in the Badaun gangrape case, in which two sisters were hanged to death after rape.

Not surprisingly, when he joined the BJP on Monday, he had this to say about Bachchan’s candidature, “My ticket was denied and it was given to a someone who dances in films. That is even more painful.”

While the union external affairs minister, Sushma Swaraj, while welcoming him to the party, condemned his statement as “unacceptable”, the BJP, which has only tried to corner Agrawal until now over nationalistic concerns, embraced him amidst huge fanfare.

Will the defection offset SP-BSP calculations in the Rajya Sabha poll?

Agrawal’s defection is as interesting as BJP accepting one of its arch enemies in the upper house. Much of the development has to do with the upcoming Rajya Sabha elections. The BJP has fielded 11 candidates, and although Agrawal claims that he was not joining the saffron party for another term in the parliament, it is being rumoured in Lucknow that he will soon file his nomination.

UP will elect 10 MPs to Rajya Sabha. Given the assembly’s strength, 37 MLAs are necessary for electing one Rajya Sabha MP. BJP and allies with 325 seats can get 8 of their nominees with ease. SP with only 47 seats will be left with 10 extra votes after exhausting its 37 for Bachchan. It was clear that after BSP’s support to SP in the UP by-polls for Phulpur and Gorakhpur, the SP will return the favour. BSP with 19 seats was banking on SP’s 10 votes, Congress’s seven and Rashtriya Lok Dal’s one vote to get its candidate to the parliament.

But Agrawal’s departure has complicated the equation. He has joined the BJP along with his son Nitin Agrawal, who won the MLA seat from Hardoi on a Samajwadi Party ticket. This means that SP will now have only nine extra votes, which means that BSP will have one vote less than the required 37. With BJP also fielding 11 candidates, the elections will more likely become a cross-voting contest between parties. Given its dominance, the saffron party will have a clear edge. One can only remember the late night political drama that unfolded during last year’s Rajya Sabha election in Gujarat. The BJP had tried hard to defeat senior Congress leader Ahmed Patel but he had somehow managed to hold on to his seat.

Agrawal’s former close aide, Jagdambika Pal, with whom he had engineered a defection within Congress in 1997 to support the Kalyan Singh government, has already joined the BJP. The former UP chief minister who later served as the state Congress chief is now a BJP MP from Domariaganj.

Agrawal was said to have met Rajnath Singh in January this year and since then his exit was expected. To offset this, Ram Gopal Yadav had organised a function to felicitate him for his four-decade-long political career recently. However, what appears to have catalysed Agrawal’s decision was also a regional contest.

“Both Agrawal and Ashok Bajpai, six-time member of the UP legislative council and a founding member of SP, belong to Hardoi. Bajpai had joined the BJP before the assembly election. With Adityanath’s government, Bajpai had become much more powerful than Agrawal in his home territory. With a history of party-hopping, Agrawal was left with no choice but to find space within BJP,” a Lucknow-based senior journalist told The Wire.

Meanwhile, yet another associate of Agrawal in the ABLCP, Rajeev Shukla, who had come back to the Congress fold, too, has been denied a Rajya Sabha ticket by the Congress. He was supposed to get another term from Gujarat but the party preferred the adivasi leader Naranbhai Rathwa over him.

By associating with Agrawal, who was a bitter enemy until recently, the BJP has only shown its seriousness about elections. After all, the party president, Amit Shah, had made it clear that the party intends to win every election – from panchayat to parliament. And for that, as Agrawal’s induction reflects, it is ready to make both ideological and ethical compromises.