The event to commemorate the formation of the Provisional Government of Azad Hind became one more occasion to bash Jawaharlal Nehru.

A BJP loyalist from Madhya Pradesh declared more than a week ago that Prime Minister Narendra Modi was lord Vishnu himself (sakshaat Vishnu Bhagwan). Many may not have taken him seriously, but after hearing the prime minister’s October 21 speech – rather, watching it, as his public appearances before a mic are more performance than substance – one cannot help but feel that he took the loyalist’s idea quite seriously. Nothing else can explain the cap on his head.

Subhas Chandra Bose is remembered by Indians on so many days and for so many reasons. Not only on various dates associated with events in his life – his birthday, his adventurous escape from house arrest, his arrival in Singapore, proclamation of the Arzi-Hukumat-e-Azad Hind (his name for the Provisional Government) – his contribution to the emergence of a free, secular India and his immense charism are recalled often. When most leaders fall short of peoples’ expectations, he is remembered as someone who might have avoided their shortcomings and errors.

Also read: The Dishonesty of Those Who Exploit and Abuse the Name of Netaji

The present prime minister forgets this constant remembering of Subhas because of his obsession with erasing all memories of the contribution of Jawaharlal Nehru to our project of nation-building.

On October 21, when Modi was to honour the memory of Subhas and his proclamation of the Provisional Government, he could not resist repeating his favourite criticism of Nehru, that he was a dynast. The son of an aristocratic personage in the galaxy of early Indian freedom fighters, Nehru ensured that he would not only become the first prime minister of India but be followed by his daughter and then his descendants – so the criticism goes. According to Modi, Nehru did everything in his power to erase the contributions of other leaders like Sardar Patel and Subhas.

Broad hints are thrown about that not just the memory but the person of Subhas was eliminated by Nehru. It is not hard to disprove these theories, by the evidence of the close relationship that Nehru shared with both Subhas and also Sardar Patel. Of course, Nehru had serious differences with them – differences that these men of real stature could freely discuss and fight over – but these never lessened their mutual respect and dependence.

Had it not been so, Nehru would not have chosen the Red Fort to unfurl the flag of independent India, a monument so closely associated in the public mind with the memory of Subhas.

Not only had the trial of his closest officers been held there, but his slogan of ‘Dilli Chalo’ was accompanied with a visual of the national flag flying on the ramparts of the Red Fort. It was this Red Fort, indelibly imprinted in public memory with the names of Subhas and his Azad Hind Fauj, from which Nehru chose to hoist the first Tricolour of the Indian nation. His choice was dictated not only by the mood of the nation but also by a generous and spontaneous desire to honour the contribution of his friend and comrade, Subhas, to making this moment possible. 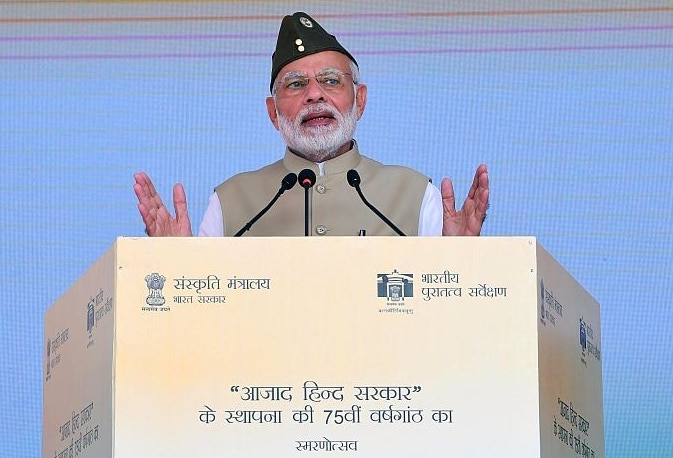 Since the motivation for PM Modi’s decision to commemorate the formation of the Provisional Government of Azad Hind was very different from that behind Nehru’s in 1947, the latest event itself was less than inspiring. In fact, it brought to mind Marx’ prophetic statement that when history repeats itself, it does so as farce.

The invitation to Modi’s event did not mention Subhas’s name. In fact, the only name it mentioned was Modi’s own, in bold and large letters. It was as if every other name, of those past and of those present, was a threat, a risk not to be taken.

No other person spoke on the occasion. No other person sat on the dais. It is usual, on such occasions, for members of families associated with what is being commemorated to be invited. This did not happen. There are members of families of those who were ministers in the Provisional Government of Azad Hind who are supportive of the prime minister. Not many, but there are some. None of them was invited.

When one thinks about it, there was little that he could have said. Had he spoken about Subhas’s government, could he have used its official name? Could he have mentioned its motto – ‘Ittefaq, Aitmad, Qurbani‘?

If he had mentioned the trial, could he have said that one of the three officers was named Shah Nawaz Khan? While speaking of the trial, which Sanghi luminaries could he have named as having fought the case when, in fact, there were none? Bhulabhai Desai, Tej Bahadur Sapru, Asif Ali and Jawaharlal Nehru himself were all Congressmen. Modi, naturally therefore, chose to say nothing about what he was supposedly commemorating. The one time he referred to the Provisional Government he used its English translation.

V.D. Savarkar, the founder of the Hindu Mahasabha and mentor of many in the RSS, was venomous in his attacks on Subhas, whom he named a ‘Hindu jehadi’. The reason for this was the militant spirit of secularism that Subhas displayed all his life.  As Congress President, he forced through a ban on any Congressman becoming a member of either the Mahasabha or the Muslim League.  Sangh Parivar member, Sarvesh Tiwari, writes “In his weekly, Subhas wrote on May 4, 1940 ‘…the Indian National Congress has put into its constitution a clause to the effect that no member of a communal organsation like Hindu Mahasabha and Muslim League can be a member of an elective committee of Congress’. He goes on to say that ‘When Syama Prasad Mookerjee joined the Hindu Mahasabha, Dr. Mookerjee wrote in his diary that Bose met him and told him if he went about building Hindu Mahasabha as a political body in Bengal, “He would see to it, by force if need be, that it was broken before it was really born.” (emphasis by the author.) 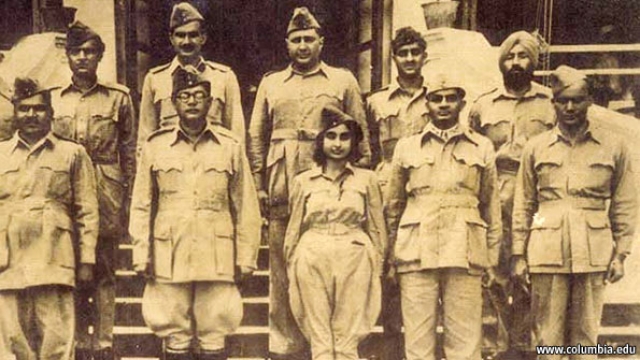 After the INA was formed, Savarkar and his supporters attacked it and its leader in the vilest of terms. This is not surprising when one considers what Savarkar himself was doing at the time. At the 23rd session of the Hindu Mahasabha in Bhagalpur, in 1941, he said “…every branch of the Hindu Mahasabha in every town and village must actively engage itself in rousing the Hindu people to join the army, navy, the aerial forces and the different war-craft manufactories…We must flood the (British) army, the navy and the aerial forces with millions of Hindu warriors with Hindu Sanghatanists’ heart.”

Sangh Parivar leaders attacked Subhas incessantly. He dared to reserve jobs for Muslims when he was elected to lead the Calcutta Corporation because he was aware of the tremendous injustice that they faced in recruitment. As Congress president, he was unsparing in his attacks on communal politics. He was a standard-bearer of Hindu-Muslim unity. As the sipah-salar of the INA (his phrase for ‘commander-in-chief’), one of his first acts was to place a chadar at the mazar of Bahadur Shah Zafar in Rangoon as homage to one whom he acknowledged as the leader of the greatest expression of Hindu-Muslim unity, the Mutiny of 1857. He vowed then that he would bring Zafar’s remains and bury them with full honours at the Red Fort, a Moghul monument and seat of power, his chosen symbol for Free India. At the same time, he insisted that all officers and soldiers of the INA should eat together, celebrate festivals together, sleep in the same quarters and observe camaraderie in thought and deed.

Also read: The Importance of Being a Gently Spoken Prime Minister

In actual fact, in the course of erasing the contribution of Nehru in the most brazen fashion, the prime minister and his cohorts are also erasing memories of an even greater ‘enemy’, Subhas, the militant secular-nationalist. It is not only his cap that the prime minister is appropriating but his persona that he and his fellow Sanghis have been trying in the last few years to transform into that of a fellow Hindutvadi.

It is not surprising, therefore, that the celebrations of October 21 were followed by the BJP troll army circulating the official photograph of the cabinet of ministers of Arzi Hukumat-e-Azad Hind with one important amendment – the only woman minister in the Cabinet was replaced by the prime minister. Perhaps, in due course, Subhas himself will be replaced by him. The appropriation of the cap is, perhaps, just the beginning of the assumption of a new avatar.

Subhashini Ali is a former member of parliament from Kanpur and politburo member of the Communist Party of India (Marxist). Her parents, Capt. Lakshmi Sehgal and Prem Sehgal, were officers in the Azad Hind Fauj. Capt. Lakshmi’s 104th birth anniversary falls on October 24.