In anything to do with the parliament of India, the prime minister has less importance than a president and vice president. 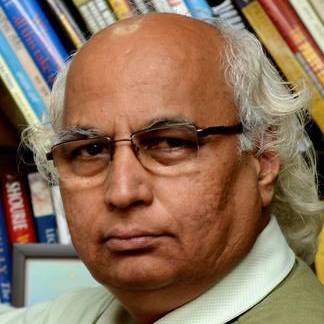 For example, in any parliamentary proceeding, if the presiding officer (speaker in the case of the Lok Sabha and chairman in the case of the Rajya Sabha, who happens to be the vice president of India) rises from his or her chair, even the prime minister has to sit down. Similarly, in any function in or outside parliament in which the president and/or the vice president are present, they enjoy a higher protocol than the prime minister. This is clearly specified in the Order of Precedence of the Republic of India, which lays down the hierarchy of important offices.

It is wrong to think this hierarchy has only ceremonial significance. No, it flows from the basic structure of the Constitution of India, as designed by its illustrious makers, almost all of whom were the leaders of, or active participants in, India’s freedom struggle. Per this basic structure, the prime minister of India is the head of government, not the head of state. In the eyes of the public, he or she may be the most prominent leader of the nation, but in the eyes of the Constitution, the president is the head of the Republic of India.

The government or the executive is only one pillar of the state. Its other two pillars — legislature and judiciary — are independent and not subservient to the government or the prime minister. Indeed, within the working of the legislature, the supremacy of the president of India is cast in stone in the Constitution itself. Article 79 states: “There shall be a Parliament for the Union which shall consist of the President and two Houses to be known respectively as the Council of States (Rajya Sabha) and the House of the People (Lok Sabha).”

Moreover, Article 86 of the Constitution specifies the “Right of President to address and send messages to Houses”.

Article 87 of the Constitution further underscores the president’s superior position in the functioning of parliament.

In short, in anything to do with the parliament of India, the pradhan mantri has less importance than a rashtrapati and upa rashtrapati. Period.

But why are we belabouring a point that is quite simple and straightforward? Because on December 10, 2020, Prime Minister Narendra Modi violated the protocol, propriety and ethics of India’s parliamentary democracy — he indeed sought to alter the basic structure of the Constitution, which the Supreme Court of India has adjudged to be unalterable in the Kesavananda Bharati case in 1975 — by the manner in which he laid the foundation stone of the new parliament building.

Modi breached the basic structure of the Constitution in two ways. One was by presiding over the ‘bhoomi pujan’ ceremony which was conducted almost exclusively according to Hindu rituals, with the representatives of other religions reduced to being bystanders. Secularism, which is a preambular principle of the Constitution and hence an integral part of its basic structure, was contemptuously given the go-by. I shall not dwell too much on this because it suffices to draw readers’ attention to Siddharth Varadarajan’s scorching comment at The India Cable (‘India’s Priest King and His Shivering Gods’ — December 15, 2020).

Varadarajan writes, “Do not be fooled by the multi-faith blessings that followed, where all of India’s major religions were represented. The televised bhoomi pujan ceremony in which Modi was assigned the key role was intended to convey the message that for the government – both executive (which Modi represents) and legislature – Hinduism and its associated rituals not only have a pride of place but some sort of official status as well….The government’s decision to showcase the ‘diversity’ of India by focusing on different  religions was also aimed at reinforcing the central role that the BJP believes religious identity plays in New India. ‘India is a Hindu nation’, and once you are willing to accept that, you will be assigned your own corner.” 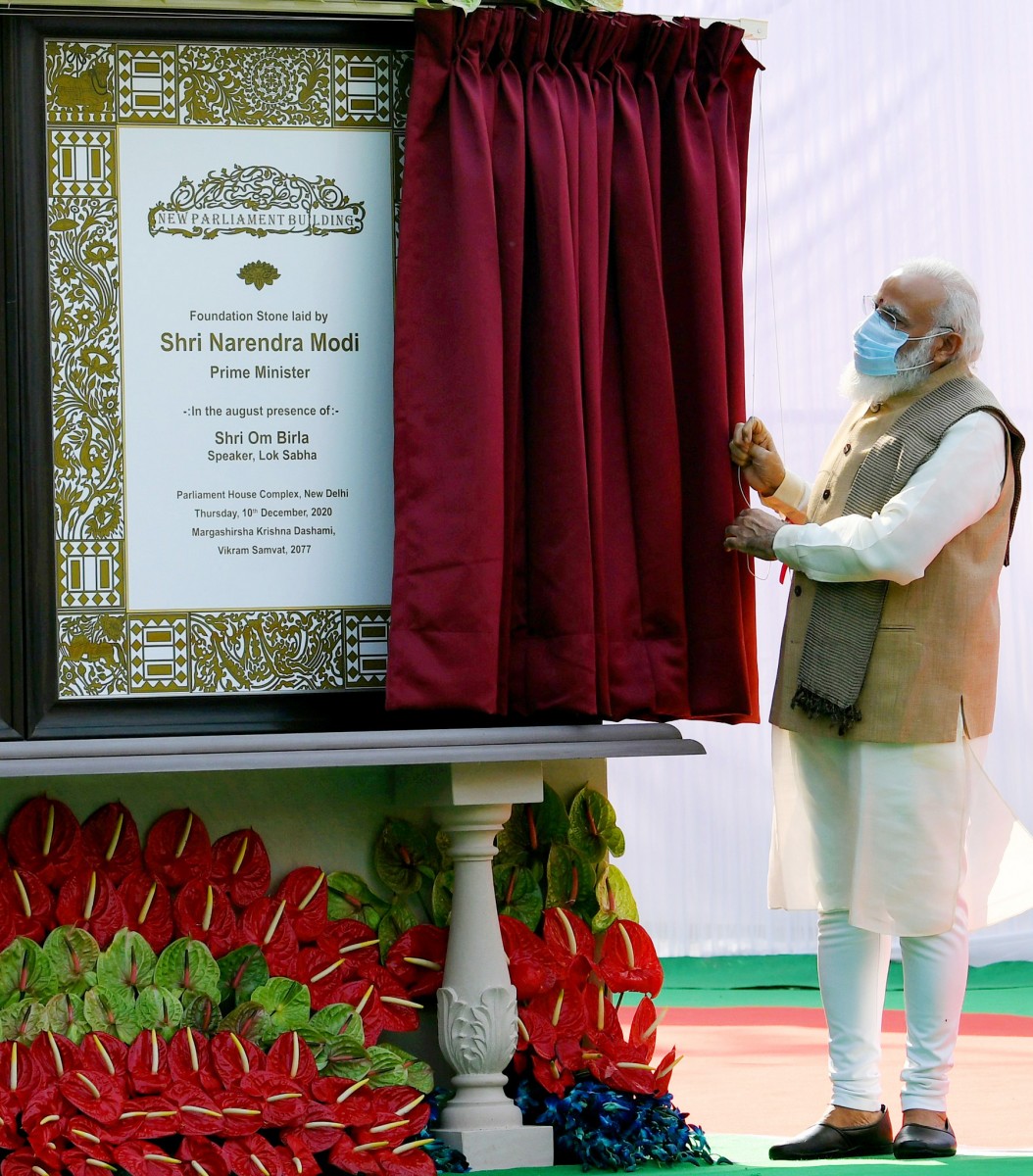 Let us look at how the prime minister assigned the president and vice president “their own corner”, figuratively speaking, by upgrading himself in the constitutional hierarchy. Take a close look at the photograph of Modi unveiling the plaque of the foundation stone laying ceremony. Your first observation will surely be that Modi’s name appears bigger and more prominently than the words on top – ‘New Parliament Building’. This is not accidental. The design of the plaque – which will be displayed prominently in the new building and will last as long as the new building lasts – is faithful to Modi’s belief that parliament is subservient to him.

The names of President Ram Nath Kovind and Vice President M. Venkaiah Naidu are missing in the plaque because they were missing at the foundation stone laying ceremony. But why were they absent? Why did they only send token messages on the occasion when their physical presence was a mandatory constitutional requirement? They couldn’t have been absent because of the COVID-19 situation. Neither the Rashtrapati Bhavan nor the office of the vice president has so far clarified on this non-trivial question, even though it has been raised both in the mainstream media and the social media.

The answer really is obvious. Modi didn’t want their physical presence for the simple reason that, had they been present, protocol would have required the president to lay the foundation stone and the names of Kovind and Naidu would have appeared above that of Modi on the historic plaque. Moreover, in the television and print media coverage of the event, he would have had to share the visual space with Kovind and Naidu, something that goes against his self-image as the Emperor of India. Haven’t his bhakts proclaimed that Modi has restored ‘Hindu Raj’ after 800 years of Muslim rule and 200 years of Christian rule?

Discerning observers of the plaque will also see another troubling way in which its contents contravene the basic architecture of our parliamentary democracy. Below Modi’s name appears, predictably in smaller letters, the name of Om Birla, the incumbent speaker of the Lok Sabha. But why is there no mention of the Rajya Sabha? Isn’t the Council of Elders an integral part of the Indian parliament? The answer, again, is obvious. Had the chairman of the Rajya Sahba been present at the ceremony, his name would have appeared above that of Modi since he happens to be the vice president of India. Hence, in order to keep the focus solely on himself, Modi went to the extent of excising any mention of the Rajya Sabha from the plaque, whose contents he probably thinks will be preserved in the time capsule of India for the benefit of future historians and archaeologists.

Breakdown of trust, consultation between PM and the Opposition

Here it is also important to discuss the absence of the leaders of Opposition parties at this important function. After all, the Opposition is as pivotal to India’s multi-party parliamentary democracy as the ruling party or coalition.

It is not that the government did not invite the Opposition parties to attend the function, but they boycotted it. The reasons for their boycott are well known – principally, the huge cost (nearly Rs 20,000 crore) of constructing the new parliament building and the associated Central Vista complex at a time when the nation’s economy has suffered a big contraction and the COVID-19 pandemic has inflicted enormous pain on a majority of Indians.

But no less important is the other reason – the complete breakdown of trust and total collapse of consultation between the prime minister and the Opposition. The government has held no meaningful consultation with non-BJP parties even on a project that seeks to make a disruptive intervention in the historic precinct of the Indian parliament. Instead of Opposition leaders learning about the government’s plans for the new parliament building and the Central Vista project, wasn’t it obligatory for the prime minister to share these plans with them and seek their views and suggestions before finalising the design and other functional features?

Indeed, in view of the sheer magnitude of disruption in the heritage of the national capital, the government ought to have also consulted many other important personalities – former Presidents Pratibha Patil and Pranab Mukherjee (when he was alive), former Vice President Dr Hamid Ansari, former Prime Ministers H.D. Deve Gowda and Dr Manmohan Singh, former Deputy Prime Minister L.K. Advani, former Speakers of the Lok Sabha Manohar Joshi and Shivraj Patil — not to speak of the chief ministers of all the states, since India, after all, is a Union of States. The projects also required much wider consultations with experts in heritage conservation. The government of course has the powers to take the final decision. But isn’t extensive consultation, both formal and informal, the oxygen of democracy?

The message from golden jubilees

To know how things were not always like this and how, despite all its shortcomings, Indian parliament and Indian governments worked in more consultative ways, let us look back at two landmark events in the recent past.

In 1997, the two houses of parliament held a special session to mark the golden jubilee of India’s independence. It was a marathon session lasting five days, the longest in the history of special sessions of parliament, in which almost every member spoke. Many speakers, including Atal Bihari Vajpayee, who was then the leader of the opposition, underscored the importance of dialogue among parties aimed at enhancing cooperation and promoting consensus-building. The unanimous resolution called the “Agenda for India”, which was adopted on the occasion, emphasised, among other things, that “participatory democracy” is the “essence” and source of “prestige” of parliament.

Also read: When the Supreme Court’s Vista of the Law is Clouded By Great Expectations

In 2002, a special function was held to mark the golden jubilee of parliament (the first general elections having taken place in 1952). The venue was the auditorium of the newly constructed library complex within the precincts of parliament. I distinctly remember that then Prime Minister Atal Bihari Vajpayee had held consultations with President Dr K.R. Narayanan, Vice-President Krishan Kant, Speaker Manohar Joshi, Leader of the Opposition Sonia Gandhi, and leaders of other parties. Indeed, all of them were present at the function in which Sonia Gandhi even sounded a critical note. She said that communalism posed a threat to democracy and national unity, and expressed apprehension that the BJP-led government wanted to change the basic structure of the Constitution. Vajpayee, in his speech, affirmed: “It has been a national resolve that there will be no change in the basic structure of the Constitution.” Vajpayee also praised former Speaker Shivraj Patil, a prominent Congress leader, for his “vision and foresight in initiating the library project”.

Alas, how far Modi has deviated not only from the vision of the makers of the Constitution but also from the inclusive politics of the founder of his own party!

And he is the same prime minister who, after being re-elected in May last year, bowed and respectfully touched the Constitution of India with his forehead at a function in the central hall of parliament. The spirits of all the great leaders of India, whose portraits adorn the walls of the central hall, were witnessing his theatrical show of respect to the Constitution then. Surely, they have also witnessed his flagrant disrespect to the Constitution when he did ‘bhoomi pujan’ for the new parliament building in a manner that forebodes more ominous changes in India’s parliamentary functioning and constitutional order in the run-up to 2024.

Sudheendra Kulkarni served as an aide to former Prime Minister Atal Bihari Vajpayee and is the founder of the ‘Forum for a New South Asia – Powered by India-Pakistan-China Cooperation’. He is the author of Music of the Spinning Wheel: Mahatma Gandhi’s Manifesto for the Internet Age. He tweets @SudheenKulkarni.