Newspapers said that a lot more than just a one-day visit is required if the Union government is serious about its outreach in the region. 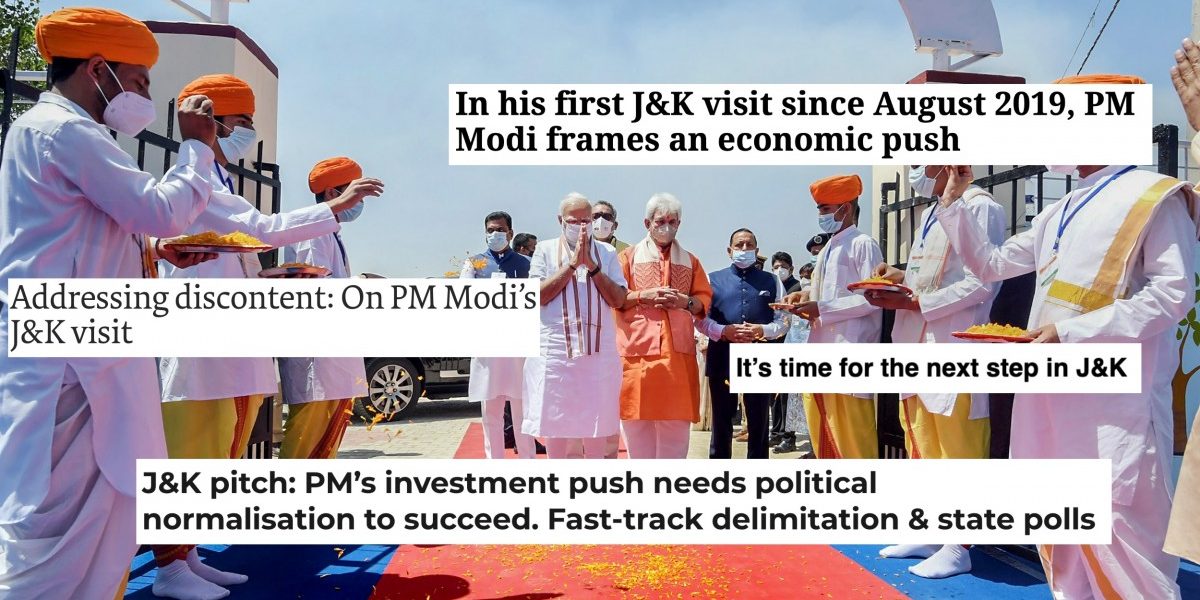 New Delhi: On Sunday (April 24), Prime Minister Narendra Modi made his first trip to Jammu and Kashmir after Article 370 was read down in August 2019 and the erstwhile state was divided into two union territories. While in Jammu for the day, he inaugurated and laid foundation stones for multiple development initiatives worth Rs 20,000 crore for Jammu and Kashmir.

As The Wire had reported, politicians and observers in Jammu and Kashmir had expressed skepticism over Modi’s visit, which had been widely publicised and touted by the administration.

On Monday morning, several English-language national dailies too commented on the prime minister’s trip, while saying that a lot more than just a one-day visit is required if the Union government is serious about its outreach in the region.

‘The return of J&K to statehood will be a good beginning’: The Hindu

While the development and infrastructure projects announced in Jammu and Kashmir are very welcome and will help shore up the economy after it was hit by multiple lockdowns, The Hindu‘s editorial argued that this would not be enough to assume that the simmering discontent – exacerbated by the Union government’s August 5, 2019 decision and subsequent repression – would be assuaged.

The District Development Council polls, which the Gupkar Alliance won decisively on the plank of returning Jammu and Kashmir to its pre-August 2019 status, is one indicator of that, the newspaper argued. And there are others:

“Notwithstanding the recent uptick in economic activity after the prolonged turmoil post-August 2019, there is no indication that the resultant discontent has diminished; security risks continue to remain preponderant as the spurt of terrorist violence shows including the killing of two “fidayeen” militants barely 14 km from Palli village, where the Prime Minister made his address on National Panchayati Raj Day. Beyond doubt, New Delhi must engage in substantive outreach in the form of gestures that reverse the hostility towards the political representatives in the Valley. The return of J&K to statehood will be a good beginning.”

The Hindustan Times pointed out that Modi’s visit came soon after reports that the Delimitation Commission has recommended “an increase in seats to 90 from 83, with six of the new seats in the Jammu region” – a proposal that the Union government is likely to accept in the coming months, despite backlash from the Kashmir Valley.

The newspaper lauded the Union governments projects in Jammu and Kashmir, saying, “Looking beyond strategic imperatives, and the usual hype, there does seem to be a real effort to better connect J&K with the rest of the country.”

The fact that the Centre has revoked the Armed Forces (Special Powers) Act from several regions also brings cautious hope to Kashmir, though no such move has been taken there yet, the Hindustan Times said, as does the change of regime in Pakistan. But that’s only one side of the story, the newspaper argues, and that’s why the Union government needs to do more:

“On the flip side, it comes even as terror attacks in the Valley continue, with targeted attacks on civilians, including those from other parts of the country, remaining a matter of concern. And it comes at a time when regional political outfits are becoming impatient, and would like to see elections held at the earliest. All of this sets the stage for what should be the government’s next big step in J&K — an even more concerted effort to push development; a focus on making the region safe and secure, including for migrant workers who are, unfortunately, soft targets; and an accelerated effort towards electoral democracy in the region. It is time.”

‘One big challenge for GoI is to win hearts and minds’: Times of India

The new investments and focus on panchayats that Modi spoke of in his Jammu speech, according to the Times of India‘s editorial, “are also political signals – that Article 370 was holding J&K’s development back and it is only now that the region can enjoy fruits of prosperity”.

The editorial said that since there has never been a shortage of Central financial assistance to Jammu and Kashmir, the “real economic test in post-370 nullification will be whether new investment and “new” politics can create new opportunities, assuming Pak-abetted terrorism can be kept at bay”.

And that terror, the Times of India argued, shows that the Union government is yet to win people’s trust in Jammu and Kashmir. That is something the government must now focus on, according to the newspaper:

“Valley terror also shows that one big challenge for GoI is to win hearts and minds. Only this can provide a popular shield against Pakistan’s terrorist proxies. It will also create conditions for actual on-ground private investments. Towards that end, assembly elections in J&K and eventual restoration of statehood are vital to ensure residents have a say in their own development. That in turn requires the delimitation exercise – which is in the public opinion/consultation stage – be fast-tracked.”

By giving so much importance to panchayati institutions, the Indian Express said in its editorial, it appeared as though the prime minister was covering up the fact that the “Modi government, since May 2019, has done its best to marginalise the established political parties in Kashmir”.

“The panchayats are a small cog in the wheel of the administration, and their members, elected in a process marred by violence and living under the threat of militants, know it. It is widely understood that only an Assembly election can truly empower the people through their chosen legislators, just like it does in the rest of the country,” the editorial argued.

While the delay in holding assembly elections was justified by citing the delimitation process, the Indian Express argued that “Putting it off any more can only confirm the government’s continuing contempt for the will of the people and the democratic process in J&K.”

“In his outreach to the youth in the Valley, the prime minister said, “You will never suffer the way your parents, grandparents did in the past.” This welcome message of hope can be realised on the ground only if the youth become stakeholders in the building of the state. The investment push, infrastructure development and the flow of tourists into the Valley need, for their fruition, a genuine political process, an essential aspect of a democracy,” the newspaper concluded.