Modi Is Taking India to a Dangerous Place

A statesman is one who admits when he has made a mistake and has the grace to correct it before it does any more harm. The prime minister, unfortunately, has shown no signs of having either of these virtues.

Prime Minister Narendra Modi addressing the nation from the ramparts of the historic Red Fort on the occasion of Independence Day in New Delhi on Tuesday. Credit: PTI/PIB 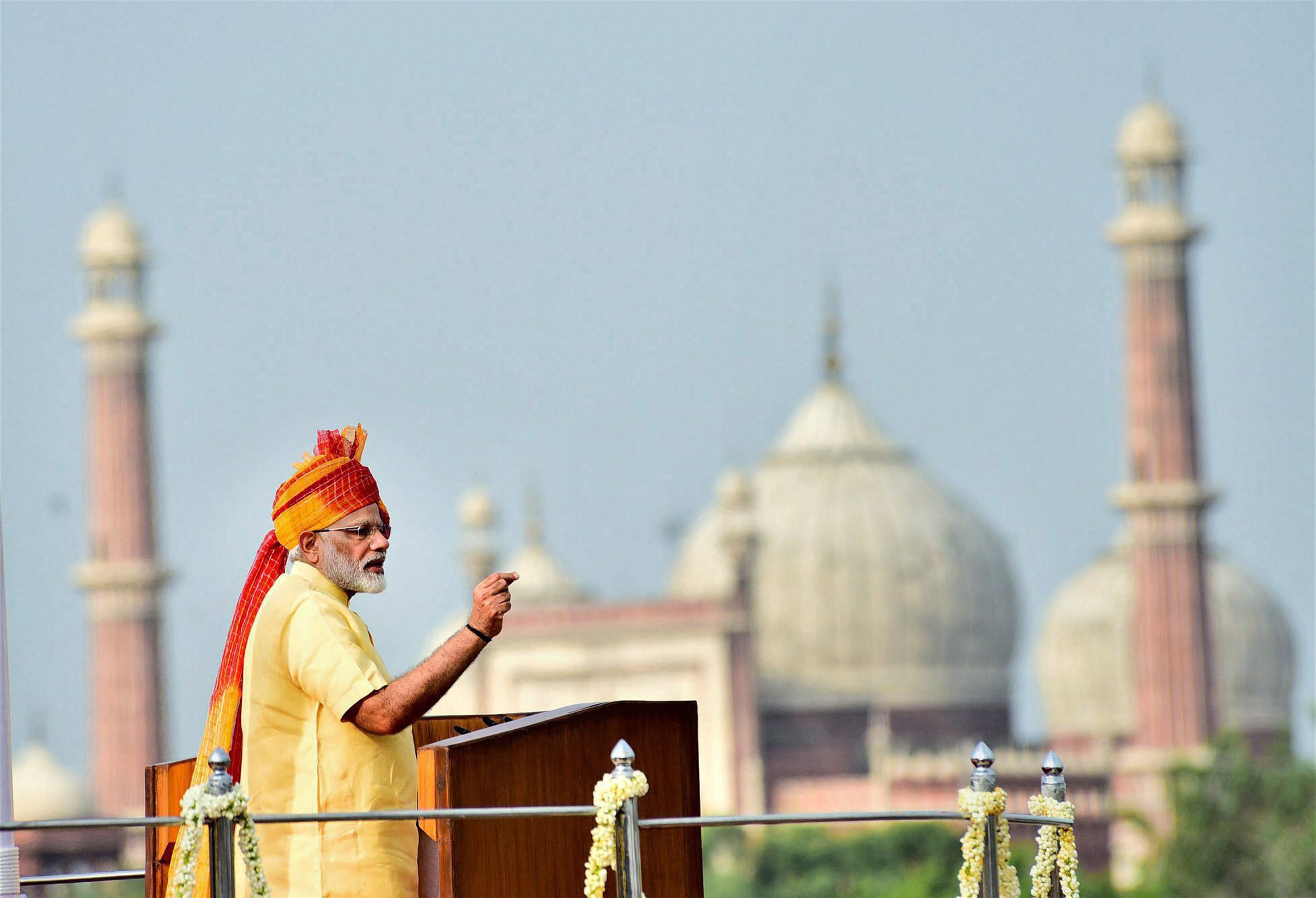 Prime Minister Narendra Modi addressing the nation from the ramparts of the historic Red Fort on the occasion of Independence Day in New Delhi on Tuesday. Credit: PTI/PIB

There was a discernible note of self congratulation in Prime Minister Narendra Modi’s Independence Day speech this year. As usual, it was replete with claims – “In our country everyone is equal”, “Those who have looted the nation and looted the poor are not able to sleep peacefully today” – and exhortations – “Bharat jodo“, “Let us create a new India” – that are entirely devoid of content. But these are not the sources of his satisfaction. That arises from his confidence that he has ensured a continuation of the BJP in power for the foreseeable future. He has done this by ensuring that the opposition is unable to unite to face the BJP in 2019; and by relentlessly undermining the constitutional safeguards upon which India’s secular democracy has rested, should it become necessary to retain power through constitutional sleight of hand.

The path India is being taken on

In the last three years, Modi and Amit Shah have removed virtually every institutional hurdle to the creation of the ‘new nation’ he talked about. The BJP now has a president and vice-president of its choice, thus ensuring that any conceivable future head of state will follow Modi’s instructions.

After its successes in Uttar Pradesh, Uttaranchal and Assam, the party will soon have the majority in the Rajya Sabha that it needs to enact transformative legislation.

By overturning the seniority-cum-merit system of promotion in the army, Modi has sent the message out loud and clear to the army that henceforth, it does not serve the constitution but the prime minister. The spate of statements from all and sundry in the armed forces that have begun to equate dissenting with the BJP with treason shows that the army has got the message.

The obstacle of the Supreme Court remains. But Chief Justice J.S. Khehar, who had overturned the judicial accountability Bill and saved the collegium system for the appointment of Supreme Court and high court judges, will retire in a few months and it is a safe bet that Modi will renew his struggle to destroy the higher courts’ capacity for judicial review after he is gone.

Only the electoral system, the beating heart of our democracy, will remain standing in the way. Despite all their bluster, Modi and Shah are acutely aware of the fragility of the BJP’s hold on power. In 1967, the Congress had required 40.7% of the vote to win 282 seats. In 2014, the BJP did it with under 31% of the vote. They will never, therefore, feel truly secure till they have captured that additional 10%.

Since that extra vote is not yet in sight, they have been following a two-pronged strategy to regain power in 2019. The first is to woo away the crucial 10% of the electorate by creating paranoia among caste Hindus in order to create a ‘Hindu’ identity as distinct from caste. The second is to ensure, by hook or by crook, that the opposition remains fragmented. To do this, the Modi-Shah duo launched a no-holds-barred campaign to destroy state-level parties like the Aam Aadmi Party in Delhi, the Janata Dal (United) in Bihar and the Trinamool Congress in Bengal, that enjoy a measure of constitutional autonomy and therefore the capacity to form an alliance capable of defeating the BJP in 2019.

But what is the goal that Modi believes is now in sight? Behind the camouflage of his grandiose and so far unfulfilled promises lies a single unswerving aim. That is to build a Hindu rashtra. There are hints of this in his speech, but three years into the BJP’s reign one does not need these pointers to understand the kind of India that Modi, and the RSS, intend to build.

This state will confront, not accommodate, its neighbours; this state will not tolerate cultural heterogeneity, but seek to replace it with a single homogenised culture that Modi mistakenly believes to be Hindutva. Muslims, and other minorities, will be tolerated in this entity so long as they know their place. Religious pluralism will be tolerated (but not accepted), as former vice president Hamid Ansari pointed out in Bengaluru, but cultural pluralism will not. For the minorities, the path to success will be through cultural assimilation. In sum, Modi is intent upon changing the very idea of nationhood upon which India’s political identity has been based not just for the past 70, but the past 2,000 years.

Is such a profound change even possible? If not, where will its pursuit lead us? Three years on from his swearing in, the answer can no longer be ignored. In every single sphere of governance, Modi is leading India into deadly peril. If he continues down this road, India’s failure as a state is guaranteed. 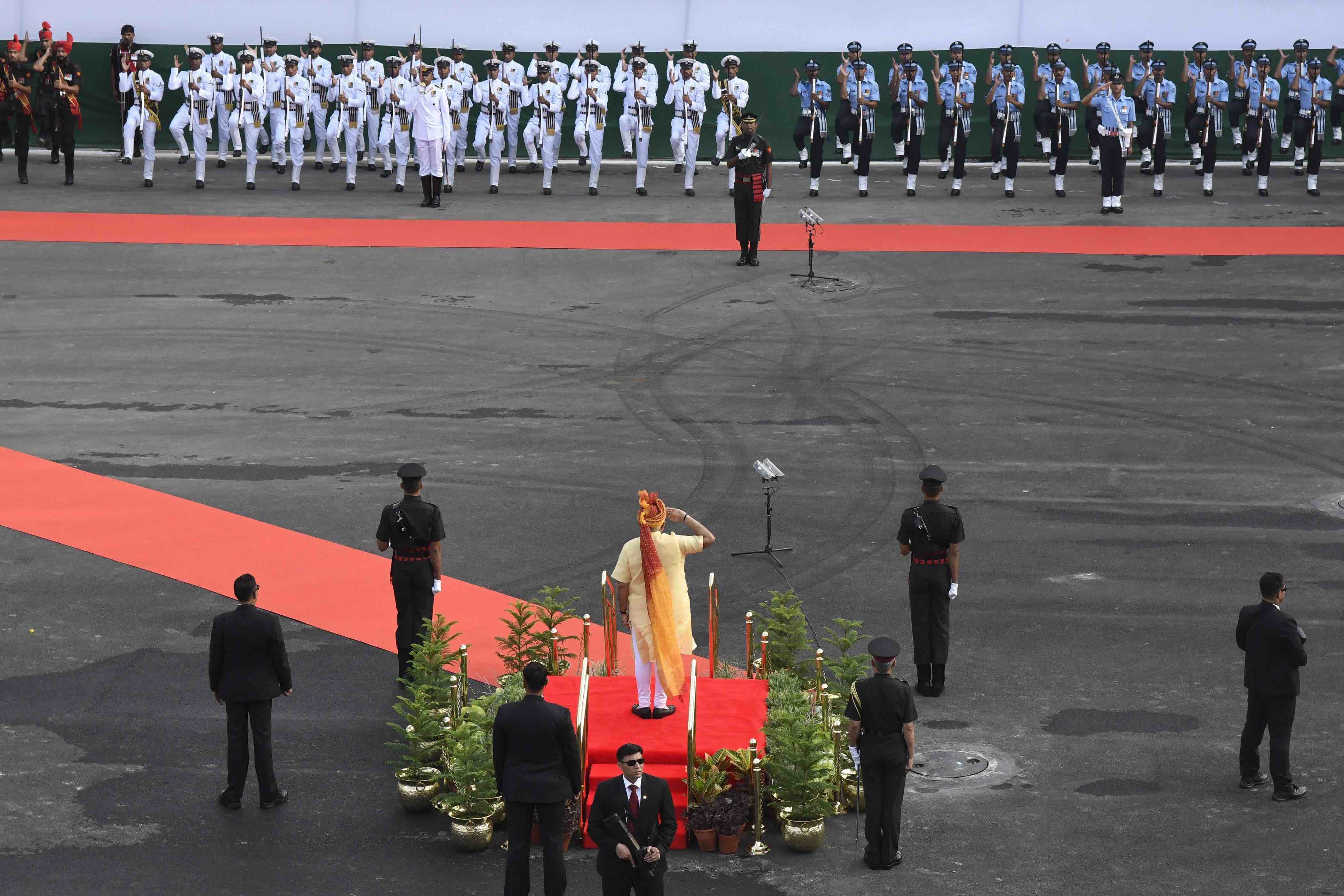 Prime Minister Narendra Modi inspect a guard of honour before addressing the nation from the ramparts of Red Fort during the Independence Day function in New Delhi on Tuesday. Credit: PTI/Shirish Shete

Let us look at where he has taken India in the past three years. In Kashmir, he has let loose a regime of absolute terror based on the idea of zero tolerance for political dissent. Today there are no militants in Kashmir, only terrorists who are being hunted down and killed without even being given a chance to surrender. Modi says the Kashmiris are itching to be freed from them. That of course is why hundreds of thousands of youth poured out into the streets and were able to close down the whole of Kashmir for five months last year.

What mainstream and separatist leaders have made clear, repeatedly, is that while they want ‘azadi’ from India, they do not want to become a part of Pakistan. Nor do they want to sever their links with India. All they want is not to be ruled by Delhi, especially on matters concerning their politics, culture and religion. Today, mainstream and separatist leaders are frantic in their pleas for the resumption of a political dialogue with Delhi because the absence of dialogue and Modi’s sole reliance on the gun is driving the youth steadily towards Pakistan, and more recently al-Qaeda and ISIS. Modi has only to live up to the promises he made a year ago to opposition leaders from Kashmir, to discuss any solution within the Indian constitutional framework, for Kashmir to start calming down. But he is dead set against this because a willingness to negotiate with a local government or movement goes agains the very grain of the hard nation state that Modi wants to turn India into and makes him, personally, look weak.

Not only is Modi’s hardline policy pushing Kashmir into the arms of Pakistan and jihadi Islam, but it has given the Pakistan army the excuse it had been looking for since 2007 to steadily weaken Pakistan’s democratic establishment and concentrate power in its own hands. This has reversed the trend that India’s helpful and accommodating attitude to civilian governments there, since its foreign exchange crisis in 2012, had created. Indian firing across the LoC has killed 39 persons and injured 133 in 2016, and killed 24 and injured 170 so far this year.

Close to 500 poor and utterly innocent families have therefore suffered grievous losses in Pakistan-occupied Kashmir and possibly a similar number in Jammu and Kashmir, over something that Modi and the Pakistani generals know perfectly will yield them not a stitch of territory or military advantage.

A more immediate peril into which Modi has gratuitously pushed India is the mounting confrontation with China on the Doklam plateau in Bhutan, adjoining Tibet’s Chumbi Valley. Only those willing to gamble recklessly on India’s future have not recognised that the Chinese official position paper released on August 2 is in effect an ultimatum to India to leave the Doklam plateau, or be forcibly ejected from it. It concludes by stating baldly that “No country should ever underestimate the resolve of the Chinese government and people to defend China’s territorial sovereignty. China will take all necessary measures to safeguard its legitimate and lawful rights and interests. The incident took place on the Chinese side of the delimited boundary. India should immediately and unconditionally withdraw its trespassing border troops back to the Indian side of the boundary. This is a prerequisite and basis for resolving the incident” (emphasis mine).

The Chinese ambassador in Delhi underlined this the next day by stating that the presence of even one Indian soldier in Doklam will be considered an act of aggression. But another fortnight has passed and Modi has refused to budge.

Instead, as the South China Morning Post has reported, India is reinforcing its military presence at the India-Bhutan-Tibet tri-junction, and analysts are warning China of the possibility of  a blockade of the Malacca straits by the Indian Navy if China wages war in the Himalayas. Thus, after deriding Jawaharlal Nehru day in and day out for irresponsibly pushing India into the 1962 war, Modi is doing exactly the same thing – pursuing a reckless policy with China and gambling everything upon its not daring to strike back.

I have written extensively in my columns, as have many others, on the Sangh parivar’s relentless assault on Indian Muslims, on secular and Left intellectuals, and on the BJP’s political opponents, using and abusing every instrument of law the government could lay its hands upon, so I will not dwell on it any further.

Nor, for the same reason, will I dwell on the catastrophic decline of the Indian economy in the last four years and the many stratagems the Modi government has used to hide it. Suffice it to say that after taking into account those who have lost their jobs, the net employment growth in these years has been close to zero.

But Modi is as unable to step back from his gigantic blunders with Pakistan, with China, with Nepal and in the handling of the economy, as he was in admitting his bungling of the demonetisation. An essential requirement in a statesman is the self-confidence to admit when he has made a mistake and the grace to correct it before it does any more harm. India’s greatest peril arises from the fact that Modi has not shown any signs of having either of these virtues.