“People of the country are silent but they are watching how the road is blocked and how people are facing trouble travelling. Every vote to BJP would stop this... A vote to BJP will also increase my power at the Centre.”

Prime Minister Narendra Modi address the Vijay Sankalp Rally in support of the east Delhi ahead of the upcoming polls, at Karkardooma, February 3, 2020. Photo: PTI/Manvender Vashist

New Delhi: Prime Minister Narendra Modi today termed the anti-Citizenship Amendment Act protests at Shaheen Bagh, Jamia and Seelampur in Delhi as not a “sanyog” (coincidence) but a “prayog” (experiment). He urged the capital to vote for the BJP in the upcoming Delhi assembly elections in order to prevent similar protests and blockades of roads and lanes.

Through his speech at Karkardooma in East Delhi, the prime minister confirms that attacking the protests at Shaheen Bagh plays a prominent role in his party’s strategy, one which wishes to instil fear about the ongoing protests for electoral gains.

Incidentally, two BJP leaders – Union minister Anurag Thakur and MP Parvesh Verma have already been pulled up by the Election Commission for incendiary speeches over Shaheen Bagh. The Aam Aadmi Party has also complained to the poll panel over UP CM Yogi Adityanath recent speech too where he spoke about using bullets if words didn’t work.

Still, Modi attacked both the Congress and the Aam Aadmi Party for orchestrating the country-wide anti-CAA protests. But he directed his main attack at the Arvind Kejriwal government. “Some came to change the politics but their mask has come off and their real face has come to light. When surgical strike happened, they were questioning the army and our brave soldiers. They insulted our army,” he said, seeking to use the same charges which helped him secure a win during the Lok Sabha elections in 2019.

Modi also tried to project an image of a grim future if other parties were to come to power. “There was a time when many terror attacks used to take place in Delhi, but due to efforts of the forces such attacks stopped. But when Batla House happened, they called it a fake encounter and demanded action against Delhi police; they are protecting those who desired “tukde tukde” of India. Vote bank politics is responsible for this. They can’t provide security to the people of Delhi,” he said, while accusing AAP of taking sides with those opposed to BJP’s ideology.

The PM also drew Congress into his line of fire and said that both “AAP and Congress are playing politics and these have come to light (through anti-CAA protests)”.

He also alleged that “by keeping the national flag and constitution (at the protest sites), the attention is being diverted from the real intent.”

‘Courts do not wants protests to inconvenience people, but no one is listening’

Modi said the courts have repeatedly said that ordinary people should not be inconvenienced by protests and there should be no destruction of property during any agitation. “But they are not prepared to listen to the courts too. They are not willing to accept the court rulings and are telling people about the constitution?”

“People of the country are silent but they are watching how the road is blocked and how people are facing trouble travelling between Delhi and Noida. There is a need to curb this thought process – if this is not stopped, tomorrow they will block some other road or lane. Only the people of Delhi can stop this. Every vote to BJP would stop this.”

And then, with a measured thought, he added: “A vote to BJP will also increase my power at the Centre.” 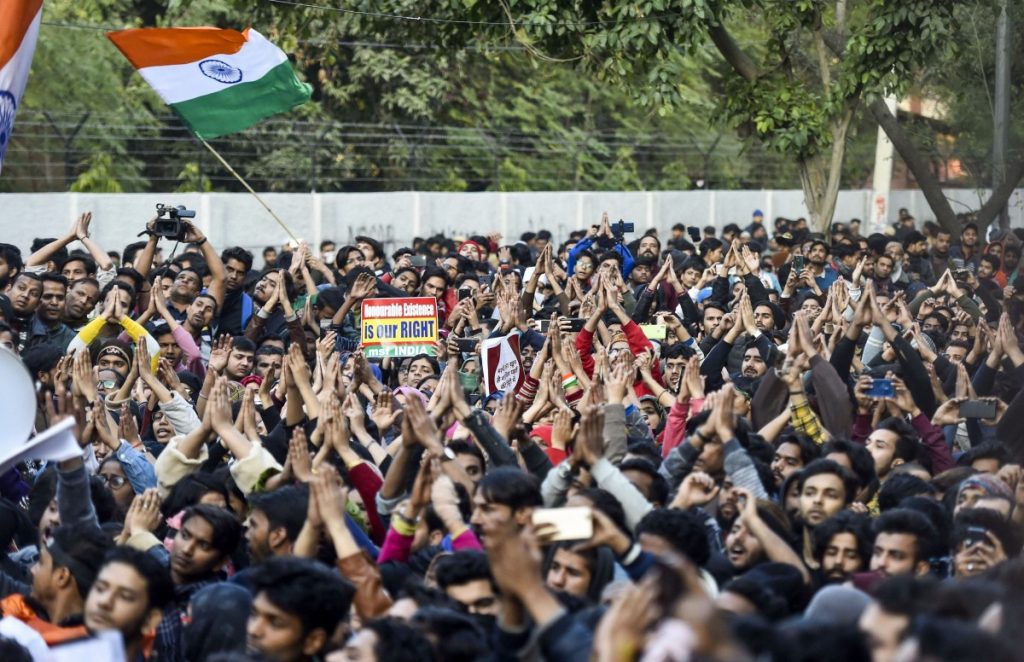 Earlier, the PM also accused the Arvind Kejriwal government of stopping development works in Delhi over petty politics – a charge which Kejriwal has also often levelled against the Centre.

Modi questioned why the Delhi government did not implement the Ayushman Bharat health insurance scheme or the PM Awas Yojana for housing for the poor and why public transport bus were in poor condition and politics was played over expansion of Delhi Metro.

Modi also accused Kejriwal of discriminating against the Poorvanchali and Bihari people residing in Delhi. “(Bihar CM) Nitish Kumar said Delhi has refused entry to buses from Patna. Why such hatred for people of Bihar and Poorvanchal?” he asked.

He further alleged that were AAP leaders who earlier said that “with a Rs 500 ticket people come from Bihar and get treatment worth lakhs in Delhi.”

The PM also questioned what happened to AAP’s promise of having a Lokpal for Delhi. “We set up a Lokpal but Delhi’s population is still waiting for its own Lokpal. Despite such a big agitation what happened? When intent is right, the correct decisions are taken and development takes place,” he said.

As for his government’s work for Delhi, Modi said it brought in a legislation to provide ownership rights to residents of unauthorised colonies and has also come up with a “Jahan jhuggi, wahin makan” (housing at slum site) scheme for the poor.

Noting how in a short span of time he has done away with several “atkay aur latkay” (stuck and pending” issues, he said Delhi also needed such quick decision making now.

In this regard Modi mentioned how issues that have been pending for decades such as reading down of Article 370, decision on Ram Temple, construction of Kartarpur corridor, CAA gave rights of citizenship, construction of National War Memorial and National Police Memorial for martyrs; and implementation of enemy property law have been resolved by his government.

He also spoke about the Bodo and Tripura agreements; punishment to 1984 accused; procurement of next generation aircraft for Air Force and appointment of Chief of Defence Staff and implementation of GST as major pending issues settled by his government.

Modi said the Budget 2020-21 has also provided relief to traders and business across the country and its impact would also be felt by traders in Delhi. His emphasis on this aspect assumes significance since Kejriwal belongs to the Vaish community and a large number of business community people had voted for AAP in the last assembly polls.

As such, Modi spoke about BJP’s long association with Delhi’s traders and how it always tried to minimise their problems and difficulties. Realising that the trading community was angry due to demonetisation and his government’s FDI and taxation policies, he said: “We want to provide businesses with quick and adequate loan with ease.” Also, he said, the audit limit has been scaled up to from Rs 1 crore turnover per annum to Rs 5 crore.

On the “old complaint of traders about tax authorities”, he said, the Centre had earlier started an indirect tax settlement scheme to rid businesses of legal wrangles and now that has been extended to the direct tax settlements too. Also, he said, “now tax officers will not know who is the trader and from which city – everything will become online. Decisions will be based on papers, not on faces or pockets.”

‘Common entrance for Group B and C vacancies’

The PM also announced that for non-gazetted government jobs and Group B and C vacancies, now there will be one common online examination and that would open appointment to railways, banks and other government departments. He said a National Recruitment Agency has been constituted for this and hoped that this plan would benefit a large number of students who come to Delhi for preparing for entrance examinations.