Dear Prime Minister, Now Do You Believe That No Man Is an Island?

Narendra Modi has burnt every bridge, antagonised every peer and decapacitated every institution which could have helped him cross the troubled waters he now has to negotiate. 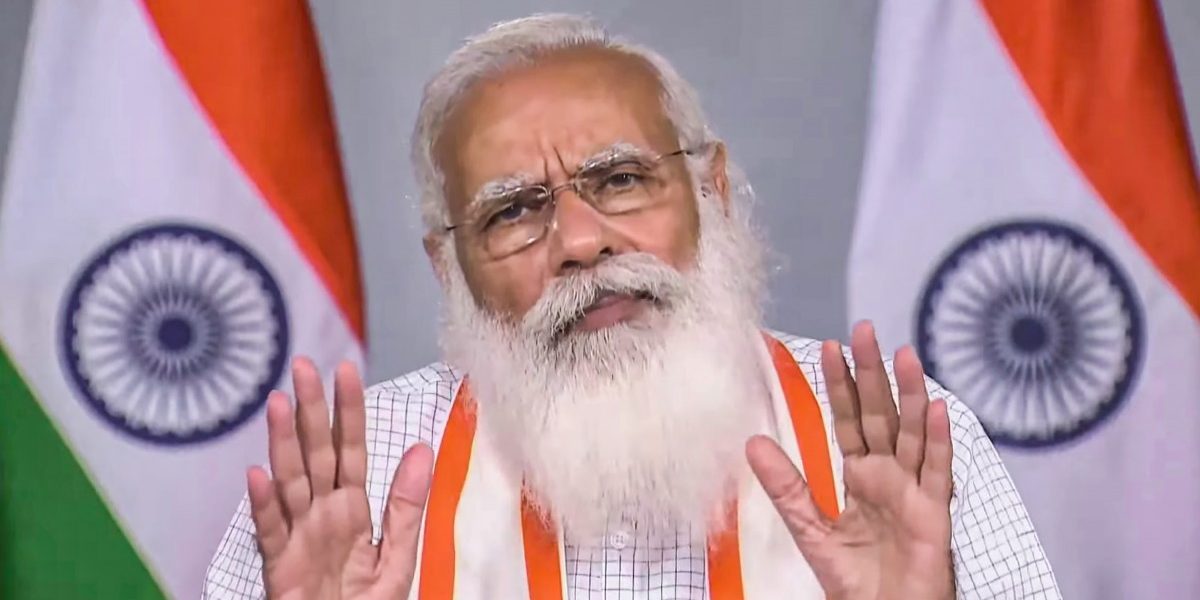 If Bal Narendra had spent some more time in school instead of rushing off to sell tea at a railway station which did not even exist at that time, he would have imbibed some wisdom from a couple of old adages: ‘Don’t burn your bridges behind you because you may need them again tomorrow’ and ‘Be courteous to the people you cross on your way up because you will meet them again on your way down’. These would have stood him in good stead in this hour of his biggest political crisis, when he and the country face a complete meltdown. For he has burnt every bridge, antagonised every peer and decapacitated every institution which could have helped him cross the troubled waters he now has to negotiate.

Modi’s destruction of India can be divided into three broad phases – demonetisation, 2019 and COVID-19. In the first one he knocked the bottom out of the economy with demonetisation and the Goods and Services Tax, and intimidated the media into a subservient silence. In the second, after winning another term, he demolished federalism by pulling down as many as nine elected state governments and rewriting our relationship with Kashmir, putting the goal of the Hindu rashtra on the front burner with the Citizenship (Amendment) Act and National Register of Citizens, and extracting the Ram Mandir judgment from the Supreme Court. In the third phase he put parliament in the freezer along with the vaccines he never bought, upgraded the Hindu rashtra to a Corporate Hindu Rashtra by ramming through the three farm laws and amendments to the labour laws, quietly acquiesced to Chinese occupation of our territories, and made a horrendous mess of the management of the pandemic.

These phases overlap, of course, but running through them is a malevolent common thread – of subjugation of constitutional and regulatory institutions, gross misuse of enforcement and police agencies, undermining of the judiciary, politicisation of the armed forces, an overbearing arrogance and insensitivity to public opinion, ruthless crushing of dissent and false propaganda and image building on a Goebbelsian scale.

Modi and his fawning cohorts, who still wear their N-95 masks over their eyes instead of their noses, consider these phases as great achievements and milestones in the establishment of a majoritarian state. But they are now discovering that it is precisely these “achievements” which have defenestrated him and have made him unfit and unable to govern this nation any longer. He has systematically blunted the tools of governance and now finds he has no arrows left in his quiver with which to confront the apocalypse facing the nation right now. He can blame no one but himself – and his hubris and insatiable appetite for power – for this.

He talks now of everyone giving up their differences and standing behind the government to fight the pandemic as one united nation; this would be ironic if it were not so hypocritical. He has spent the last seven years in doing just the opposite: fragmenting the nation along religious, caste and regional lines, simply in order to accumulate more political power. His government has gone after every sub-set of society with a vengeance – students, farmers, intellectuals, journalists, scientists, blue collar workers, voluntary organisations, academia, even social workers and activists. There have been repeated nationwide strikes against his disastrous policies – 250 million workers in November 2020 against the new labour laws, one million doctors on December 11, 2020 against the licence given to Ayurvedic doctors to perform operations, one million bank employees against the policy of privatisation of public sector banks; the farmers’ strike and the OROP protests continue unabated. But he has remained adamant and intransigent. He has said not one word about the misery of the migrant labourers. And he now expects these disparate groups to unite behind him?

Take federalism, or in his own dissembling words, “cooperative federalism”. He now expects that the opposition parties should not criticise his mishandling of the pandemic and should support him. That’s a bit rich, considering that his loudly stated objective is to wipe out the opposition totally, a “Congress-mukt” India and a “One Nation One Party” future. In pursuit of this he has used the CBI, NIA, ED, Income Tax department and friendly police forces to target leaders of political parties; the thousands of crores in the opaque electoral bonds have been gainfully utilised to pull down democratically elected governments in nine states, elections have been customised to suit the BJP’s strategy.

Modi has made a mockery of federalism, he is genetically unwilling to share power, just as he cannot share the credit for anything. Time and again he has maliciously encroached on the jurisdiction of states, whether it is by passing legislation such as the farm laws or the GST Act or the law that makes the Lieutenant Governor the “government” in Delhi, showing utter contempt for the 20 million residents of the capital who have twice booted out his party in favour of the Aam Aadmi Party. He has changed the terms of the latest Finance Commission to siphon off more funds from the states’ share of central revenues, he will not give them the promised GST dues, he uses the NIA, CBI and ED to thwart the state police forces from pursuing investigations that may embarrass his government or party. He completely usurped all powers under the pandemic Act to deny the states any role or policy making in combating the pandemic, whether it be lockdowns, SOPs, vaccination production, sale or distribution. It is only now, when his gross incompetence and arrogance has blown up in his face, that he is making desperate attempts to throw the ball back in the states’ corner. And he expects the states to “cooperate” with him on these terms?

He expects the opposition parties to cooperate with him, but when a former (and much respected) prime minster and Sonia Gandhi write to him with specific and sensible suggestions for fighting the pandemic, he ignores them with the haughtiness of a Kublai Khan. Even worse, he gets his underlings to reply to them in despicable language and to issue press statements accusing them of conspiracy and worse. He mocks a woman chief minister with cat-calls. And even after all this, he is trying to portray himself as a victim of the opposition’s non-cooperation! One can’t get any more delusional than this.

He has calcified the institutions which are meant to guide and advise the government, to act as circuit-breakers and watchdogs, as bridges between the ruler and the ruled. Parliament has been made dysfunctional, the Supreme Court has been brought to heel (even though some high courts are still holding out), the Election Commission is now just another subordinate government department, the Information Commission blocks more information than it releases. The whereabouts of the Lokpal is one of the biggest mysteries of the decade, bodies like the NHRC and the Minorities Commission simply issue notices which no government agency bothers to reply to, the CAG spends more time redacting his reports than on auditing, on papering over the government’s misdemeanours (and worse) than on highlighting them.

Even the Union cabinet is a window dressing for decisions taken by the PMO, and all reports indicate that ministers count for nothing, which is why they have all gone into hiding during this terrible phase of the pandemic. Secretaries to the government are not expected to contribute to policy making, they are required to simply carry out the PMO’s orders. The best brains no longer come to the Central government, they prefer to stay in their states. In effect, therefore, Modi’s reliance is only on a handful of bureaucrats (predominantly from Gujarat) who pass muster on the loyalty quotient but have little else to recommend them. Under the chief of defence staff, General Bipin Rawat, even the defence forces are gradually moving to a dangerous point – “political” control instead of the constitutionally mandated “civilian” control.

To conclude, Modi has locked himself up in his echo chamber and lost touch with reality. He has no ideas or instruments left to fight the pandemic with. The machinery of state has been made dysfunctional, the judiciary will take a long time to reassert its oversight role (if ever), the mainstream media lacks all credibility, vast sections of the people have been alienated, the opposition has reason aplenty to believe that cooperating with him is like hitching a ride on a tiger, the scientific experts have been sidelined in favour of Coronil and dark chocolate, people are finding it increasingly difficult to trust him, either in word or action. He is no longer seen in battle and the pandemic is more or less running its course. It will peter out eventually, and the prime minister will emerge from the debris and dust of Central Vista to take credit for it, but the corpses floating in the Ganga will be telling a different story this time.

Every party, institution, expert, state or service which could have helped Modi combat the pandemic has been deliberately bent, twisted, hollowed out or contemptuously discarded in his dispensation and rendered useless, and the prime minister is now like a general with no troops or weaponry. His vanity had convinced him that he could, like Icarus, soar to the sun alone, with no help from anyone. Like Icarus, he is now finding out that he should have heeded the advice of Daedalus. He may very well win again in 2024 with the help of his behemoth party, unlimited funds, undoubted oratorial skills, misuse of official machinery and an opposition more fractured than a shale oil-field, whose leaders prefer to hang separately than to hang together. He will probably continue to rule but his quiver is empty and he has lost the capacity to govern. That, and not just the pandemic, is our collective tragedy.