The Hoax of the Cave

A hoax in politics takes many men to invent and sustain, for politics is the responsibility of the many.

Hoaxes are the most interesting of phenomena from the point of view of truth. They often serve to restore a feeling of truth as the hoax itself is made to unravel.

Consider, for example, “the 1995 miracle” of Ganesha idols drinking milk – which is similar to the weeping Virgin Mary hoaxes. From the “Hindu milk miracle” alone we learn something important about hoaxes. Depending on their provenance, they can send a country, an academic discipline, or global political orders into a state of stupor until the hoax is revealed to be one. If the “milk miracle” lasted for months, the ‘Piltdown man’ hoax lasted for decades in biology.

The term “hoax” itself has an air of hoaxiness to it. It is likely that it came from the phrase “hocus pocus” which magicians used to utter before creating something out of nothing, such as a rabbit from a hat; transforming an object into something else, such as a kerchief into a bird; or, making something disappear, such as a coin.

Now, this act of consecrating a value into an object is not peculiar to the Catholic religion as it can be found in the act of making an idol in temples and also in the offerings made to the idols across religions in the subcontinent. Such consecrations exist outside religion too. In general, these consecrations of value can be called hypophysics.

But we are concerned with a particular hypophysical act – that of perpetrating hoaxes. Consider “the Piltdown man hoax”. In 1912, the amateur archaeologist Charles Dawson found the remains of an early human which he said was the link between modern humans and apes. Later, this archaeological “sample” was found to be a carefully organised aggregate of the remains of orangutans and humans. This hoax succeeded in deflecting the course of physical anthropology for a while.

There are academic hoaxes, of which the most popular is the “Sokal affair” in which the physicist Alan Sokal wrote a paper about physics in the style of “postmodern literary criticism”, which was nonsensical from the point of view of physics, and succeeded in publishing it in the journal Social Text. But there are two hoax essays which are more interesting for us today.

Michel Foucault is the philosopher of power in the tradition of Nietzsche, Weber and Arendt. He found that nobody came forward to write an entry on him in an important encyclopaedia—The Dictionary of Philosophers—and he took it upon himself to write one under the name “Maurice Florence”. The essay named “Foucault” written by Florence began with the clause “To the extent that Foucault fits into the philosophical tradition …” and continued without a moment of satirical distance.

On the other hand, something more interesting happened in India in 1937 when a hoax was pulled off by Jawaharlal Nehru. Nehru, who would become the first prime minister of the Dominion of India in 1947 and later 0f the Indian Union in 1950, had by 1937 been a third term president of the Indian National Congress and his popularity was already at a peak. Nehru found it quite troublesome that his own popularity could contribute to a hypophysical projection of a value-in-itself to the personality of “Nehru”, which could then be used to train the people of the subcontinent further into the cultic politics undertaken by Gandhi. As we know, the gestures of violating the rules of asceticism in public were undertaken by Nehru throughout his career, including smoking cigarettes, of which Gandhi disapproved.

Nehru’s essay under the pseudonym “Chanakya” appeared in the Modern Review, published from Calcutta, and it was titled “Rashtrapati” or the “husband of the state”. It begins with a description of the cultic popularity of Nehru—“There is a great procession and tens of thousands of persons surround his car and cheer him in an ecstasy of abandonment. He stands on the seat of the car, balancing himself rather well, straight and seemingly tall, like a god, serene and unmoved by the seething multitude.” Soon “Chanakya” poses the question whether all that were a hoax, “Is all this natural or the carefully thought out trickery of the public man?”

Following the suggestion of a hoax at work, “Chanakya” has a warning: “A little twist and Jawaharlal might turn a dictator sweeping aside the paraphernalia of a slow-moving democracy. He might still use the language and slogans of democracy and socialism, but we all know how fascism has fattened on this language and then cast it away as useless lumber.” The essay concludes: “His conceit is already formidable. It must be checked. We want no Caesars.”

This hoax of an essay by Nehru is a complex text. There are a few remarks to be made about it before we come to the hoax of our times. Nehru’s “husband of the state” makes allusions to Nietzsche and Weber, and the essay is situated between the publication of Weber’s Politics as a Vocation in 1919 and Adorno’s Authoritarian Personality in 1950, which deal with cultic forms of power. Weber had found something hypophysical in the cultic form of power – that the people witnessed in the very being of the leader the values which they held to the highest. That is, the cultic authoritarian is consecrated with value to the point that he is that value, which can be called hypophysical power. For example, in the phrases “Gandhi is Mahatma”, “de Gaul is France”, “India is Indira”, “RSS is India” and so on, a certain value comes to be the very individual, or the organisation as in the case of the RSS. Weber found that there are two distinct forms which are a requisite to construct hypophysical power, the magician and the gang leader –  “the two figures of the magician and the prophet on the one hand, and in the elected war lord, the gang leader and condotierre on the other hand”.

In that case, the maximum of hypophysical power will be obtained by the individual who is both the magician who can generate hoaxes and the gang leader who can terrorise through destruction. There are only a few figures in modern political history who could conjoin these figures into a monstrous form. The magician-gangster in these limited cases from history appears to lead to a particular outcome of total devastation.

Also read: The Puppet Master and the Politics of Ventriloquism

Do we have something like this at hand today? The hoaxer and the gang leader in one? Let us look at a few instances of his magic. The magician has managed to switch the responsibility for climate crisis from capitalism to old age and a general frailty of mankind – we feel too hot and too cold because we are too weak. He managed to find the equivalent of the crude oil of West Asian in the sewer canals of India – the gas in the sewer, he said, can be extracted with a pipe and it can be lit to make tea. He brought Alexander to Bihar to give the latter a proper drubbing. He invented a new post-graduate degree called “Entire Political Science” of which he remains the sole awardee. He has invented and installed radars in Pakistan which are blind to airplanes when it rains. There is much more, and we know that the magical prowess of the parent, RSS, far exceeds those of the prodigal son.

Of course, one must not forget the magical gang leader under whose watch over a thousand Muslims ‘vanished’ without a name for their ‘vanishing’ (pogrom, genocide, mass murder) in 2002. Since 2014 the nameless ‘vanishing’ of Dalits, Muslims, intellectuals, Right to Information activists, the mysterious threat suffered by the Supreme Court judges, the rendering of thousands of poor people across India poorer through the still nameless ‘vanishing’ of currency notes.

There is a peculiar difficulty to think through in this case. What we just described as magical acts could be both a way to the relieving experience of truth or the way into a deeper hoax. The unravelling of a hoax is in the comic relief—“see, he doesn’t get what the radar is about!” At the same time it presage our further descent into the enduring appeal of a permanent hoax which has become ‘the essence of India’ – “the ancient Indian values manifesting from time to time in the magical bodies of the avatars”.

There is no easy way to decide between these two options in politics, in India and everywhere else. Rather we must look for another way while contemplating this image – there is an oversized man (56 inches to be precise) in a cave swaddled in saffron robes posing for the cameras in a stance of catatonic freeze. Frozen men in mountain caves are consecrated with divinity in the myths of the subcontinent. This image, as with all images, captures the mode of capturing as well; that is the mode in which an image is generated is registered in the very image. 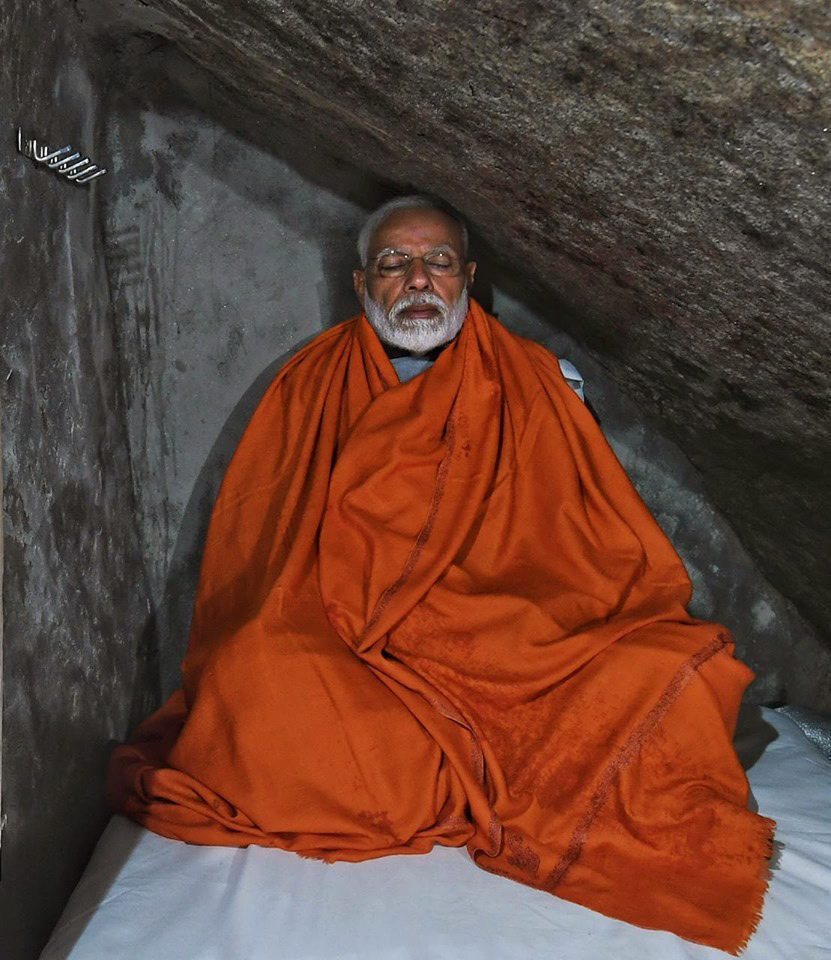 This particular image of the large man in the cave comes in a series of images. In one of them, a cameraman crouching obsequiously at the feet of the overbearing saffron subject and pointing at the face making the pose was caught by another camera which was focused on the same subject from behind. The latter image which reveals the making of the image is important. It shows that a hoax in politics takes many men to invent and sustain, for politics is the responsibility of the many.

Further, is this man the whole of the hoax? Is it the robe? Is it the stone idols who are legal persons in the juridical system? Is it the media? Is it in our myths which are continuous with our present? Is it our histories?

These questions matter one way or another to people across the world and the way around these questions and puzzles is to adopt a view towards all arrangements of power as hoaxes, behind which there are always more. Rather, the appearance of truth in politics is the worst hoax of them all. The German philosopher Kant approached political institutions as though they were hoaxes in a network. He conceived reason as the power which allowed men to expose the hoaxes of institutions. The ability to live without dependency on either the truths of the hoax or the hoax of truth was called the maturity of mankind, or enlightenment. At the same time, Kant saw in reason a responsibility which corresponded to its power to expose the hoaxes. This responsibility was tasked with finding a community of reason, where everyone would be mature enough to be free of hoaxes, which would ideally remove the hypophysical forms of power to the museum of politics.

Divya Dwivedi and Shaj Mohan are philosophers based in the subcontinent. They are the authors of Gandhi and Philosophy: On Theological Anti-Politics, published by Bloomsbury Academic, UK (2019)