Is the Narendra Modi Bubble About to Burst?

Three almost simultaneous developments, each of which would normally have dented the government’s image in only minor ways, show how Modi’s image is beginning to lose its shine. 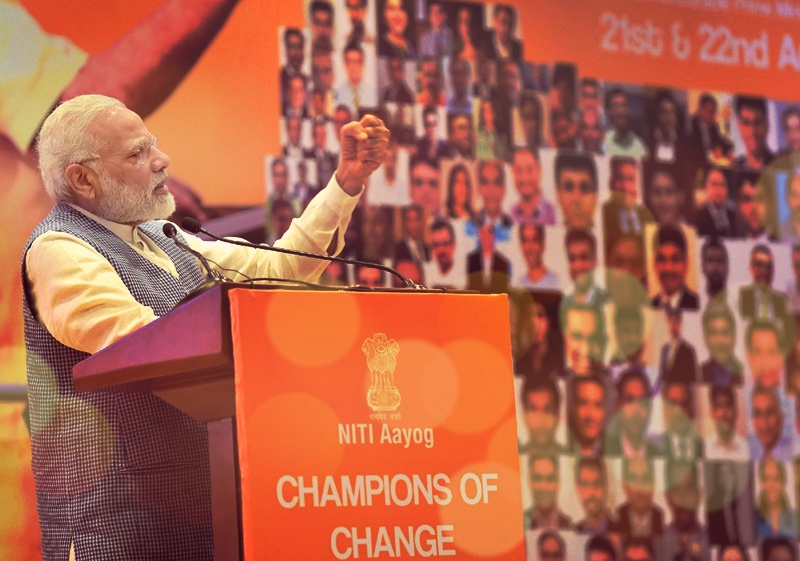 Why has Prime Minister Narendra Modi gone in for such a sweeping cabinet reshuffle now? The short answer is a growing anxiety within the Sangh parivar, voiced recently in the context of agriculture by the RSS, that the BJP’s honeymoon with the electorate, the longest that any government has ever enjoyed, may be coming to an end.

For three years, Modi’s political star has been ascending. India’s new middle class has been singing his praises, NRIs have put up altars dedicated to him in their homes abroad, even leaders in the opposition have begun to wonder whether their interests will not be better served if they join the bandwagon, rather than risk being run over by it. Bihar chief minister Nitish Kumar, once the tallest among his opponents, has already chosen the safer course.

Modi has achieved his larger-than-life stature by making a succession of promises to the people and a media blitz that has no precedent in Indian politics. Whenever you look and wherever you go, televisions screens flash his image every few minutes, announcing a new programme or welfare scheme, or admonishing Indians to take part in schemes already announced. The central government’s advertisement budget for “welfare schemes” this year is a mammoth Rs 1,153 crores, Rs 200 crore more than last year. And there is hardly a single advertisement that does not centre around Modi.

This TV blitz is supplemented by a saturation of cyberspace with praise and propaganda for Modi and the BJP, and denigration of all those who find fault with his policies. The combined onslaught has stupefied the ordinary Indian and discouraged the opposition to the point where every effort by it to build a common platform against the BJP has foundered on the unspoken belief that the effort is pointless because Modi is bound to win the 2019 elections.

But larger-than-life images also have larger-than-life Achilles’ heels. Three almost-simultaneous developments, each of which would normally have dented the government’s image in only minor ways, show how Modi’s image is beginning to lose its shine. The first is the unconditional Indian withdrawal from the Doklam plateau; the second is the news that 99% of the bank notes demonetised on November 8 have been exchanged for new notes; the third is the decline in GDP growth to a three-year low of 5.7% in the April-June quarter of 2017-18.

Coming on top of two train accidents in four days that have killed more than 20 and injured close to 200 passengers, and the death of 67 children in a single hospital in Gorakhpur, home of Adityanath, reportedly for want of something as basic as oxygen, these setbacks have stripped the Sangh parivar’s “New India” of much of its gloss. The frenzy of denials and rebuttals that has followed each of the three events reveals the government’s awareness of the softening of the ground beneath its feet.

Stripped to its essence, India’s vacation of the Doklam plateau is an unconditional acceptance of China’s precondition for the avoidance of conflict and the resumption of normal diplomatic relations. Modi’s propagandists could easily have portrayed this as a display of good sense and moderation by both sides. But they have described it as a ‘big win’ for India and a diplomatic setback for China.

Since our TV channels have lapped it up without a word of skepticism, Beijing has been forced to disclose that, contrary to the impression it is creating, China has made no real reciprocal concession to India. Hua Chunying, the Chinese Foreign Office spokesperson made this crystal clear by stating, “Chinese border troops continue to be stationed (in) and patrol (the area)”. About the road she said that China “will take into consideration all factors, including weather, to make relevant construction plans according to situations on ground (emphasis added).” 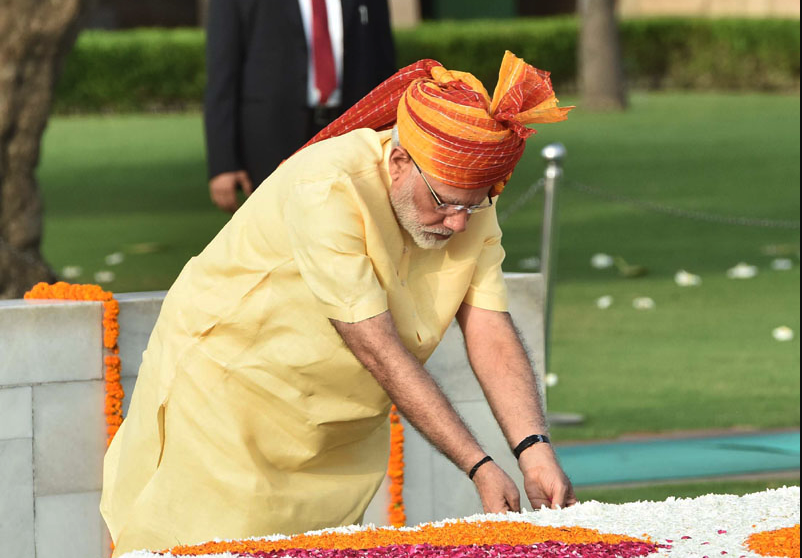 Her reference to the weather is the only hint China will not restart the road building this year. And by ‘all factors’ she may have implied that the resumption of construction could depend upon the state of Sino-Indian relations eight months from now. The Indian public is not well versed in deciphering diplomatic language. But the perception that Doklam was at best a losing draw is bound to sink in over time.

In a similar vein, had the Modi government been less nervous, it could have claimed that the return of 99% of the demonetised currency notes is an indication of the success and not failure of demonetisation. For it shows that large numbers of tax evaders have preferred to deposit their money in banks and pay the penalty, rather than lose their money altogether. The true measure of success, it could have asserted, is not the currency that did not return but the sudden increase of money in peoples’ bank accounts that has taken place since then.

As finance minister Arun Jaitley pointed out last week, this has been substantial. But the problem with putting this forward now is that it would be not the first, but the eleventh justification for demonetisation that the government would be presenting. It would therefore strengthen the suspicion that when Modi announced demonetisation personally last November, he did not really know what he was doing and that his advisers have been cobbling justifications together ever since.

An economy in crisis

The news that the GDP only grew by 5.7% in the first quarter, against 7.9% in the same quarter of the previous year, could not therefore have come at a worse time. The government has ascribed this to the sharp drop in manufacturing growth from 10.7% last year to a measly 1.2% in the first quarter of this year. But the real explanation is that the growth last year, and in fact the whole of the economic revival that the government claims is now beginning, is a statistical illusion created by the measurement of manufacturing growth by value added and not physical output.

Value added is physical output minus the value of consumed inputs other than labour. So it can change without any change in actual production or employment. This is what boosted estimates of growth in manufacturing in 2016-17. As the RBI’s annual report this year has pointed out, in April-June 2016, there was a windfall gain in value added because of a sharp fall in input costs. This year, by contrast, there has been a slight rise in these costs. Since sale prices of manufactured products have remained fairly steady, the whole of this change has been reflected in the fall of value added in manufacturing, and therefore the GDP.

Proof of this can be had by comparing the estimate of changes in value added and physical output during this period. In April to June 2016, manufacturing output grew by only 6.7%, against the 10.7% rise in value added. In sharp contrast, this year physical production rose by 1.8% in the same quarter, but value added rose only by 1.2%. This was because there had been a marginal rise in input costs of 0.6%.

The BJP, however, cannot use this argument because, in stark contrast to the GDP data, the index of industrial production shows growth in manufacturing actually declining from 4.8% in 2012-13, the last full year of UPA rule, to 2.8% in 2015-16 and 3.8% in 2016-17. Doing so would therefore put a very large question mark over the government’s claim to have revived economic growth in the previous three years.

Precise comparisons over a longer period of time are not possible because the Central Statistical Office changed the base for calculating the index of industrial production in 2011-12 and did not link the new estimates with the old, but at the very least, manufacturing growth has fallen  from an average of 8.6% a year between 2003-4 and 2011-12 to 3.5% between 2013-14 and 2016-17.

Coming on top of this, the drop in manufacturing growth to 1.8% in the first quarter of the current year is alarming, for it not only confirms what the government’s critics have been saying, that the hardships caused by demonetisation were not just temporary, as Modi kept reassuring the people, but likely to persist for a long time.

This has since been confirmed by a host of supplementary data, such as the onset of deflation in agriculture, which signals a sharp drop in buying power in the rural areas; the CMIE’s estimate that 1.5 million jobs were lost between December and April; the fact that for the first time in over 60 years commercial bank credit has actually contracted this year, when it rose by more than 20% a year in the Atal Bihari Vajpayee and UPA-I years; that 73% of the 300 plus respondents in FICCI’s latest survey of industry indicated that they had no intention of creating any jobs for at least the next three months, and McKinsey’s finding that more than 35% of the entire 466-million labour force of India in now underemployed, with no secure jobs and no social security.

The conclusion is inescapable: Modi has utterly failed to live up to his commitment to bring back the “ache din ( good days)” and his bubble is about to burst. Only a dramatic change in policies can prevent this, and for that he may have run out of time.