While Interacting With Businessmen, Narendra Modi Used His Most Audacious Spin Yet

The prime minister likened his relationship with big business to that of Mahatma Gandhi with the venerated G.D. Birla during the freedom struggle. 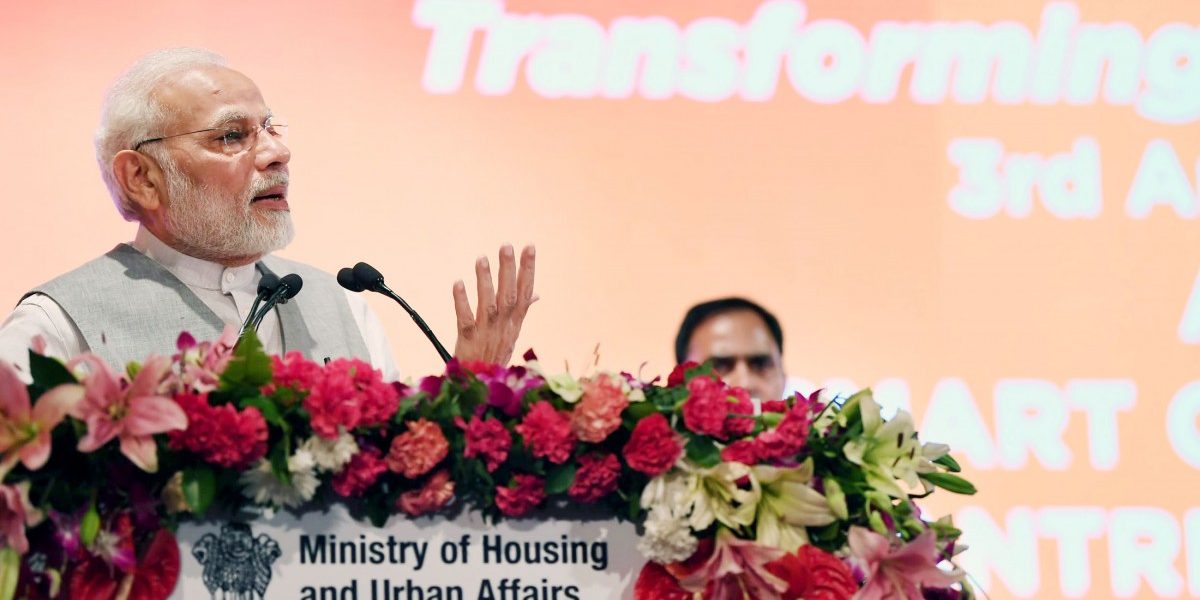 One always acknowledged that Prime Minister Narendra Modi was a master at putting his own spin on any issue his political rivals threw at him. Still, Modi’s attempt to liken his relationship with big business to that of Mahatma Gandhi’s with the venerated G.D. Birla during the freedom struggle would rank as the most audacious of all his spins.

Addressing a gathering of prominent industrialists in Lucknow on Sunday – among them Gautam Adani and G.D. Birla’s great-grandson K.M.Birla – Modi asserted he had an open and transparent relationship with businessmen as opposed to the “back room and shadowy” dealings of the opposition party leaders. And while making this assertion, Modi pointed to former Samajwadi Party leader Amar Singh in the audience and said, “Ask Amar Singh and he would tell you about the shadowy dealings of industrialists and the political class.” Singh was seen grinning from ear to ear as the prime minister mentioned his name.

Ironically, Singh, known widely to be a deal-maker during his active years, was perceived to be the closest to industrialist Anil Ambani, chairman of the ADAG group, who is at the centre of the current controversy surrounding the Rafale deal. The opposition and media are demanding answers to many questions on Rafale, and there is near unanimity among analysts that the Modi government is not transparently clarifying issues thrown up by the deal.

Indeed, the prime minister’s new spin on his “open and transparent” relationship with big business has come precisely as a counter to the direct attack on him by Rahul Gandhi for the way he renegotiated the Rafale deal during his trip to France in March 2015. Rahul launched his initial assault in the Lok Sabha during the debate on the no-confidence motion, and later followed it up with statements and tweets suggesting that Modi’s special relationship with Anil Ambani had led to public sector HAL being removed from the Rafale deal.

Modi’s sharp response in Lucknow has also come because for the first time the prime minister is being made personally accountable for the renegotiated Rafale deal. Of course, the deal still suffers from too many infirmities and unanswered questions. For instance, it is inexplicable that the Anil Ambani group has formally announced that it has got Rs 30,000 crore of offset contracts and work has begun for offset manufacturing in Nagpur, but the defence ministry apparently has no official record/documentation of offset manufacturing permissions and schedules. Defence minister Nirmala Sitaraman’s last public statement in February 2018 is that “no offsets have been decided on the Rafale contract”.

So there is complete lack of transparency in the single largest domestic offset manufacturing opportunity under ‘Make in India’ created by the purchase of 36 Rafale fighter jets. One is also not sure whether pricing of the aircraft is covered by the secrecy clause, when Reliance Defence officially announced the deal value last year itself.

So the lack of transparency in the Rafale contract does not at all conform to the principle of honesty and transparency that governed the relationship between Mahatma Gandhi and G.D. Birla. Indeed, we live in an era of aggressive capitalism where asymmetry of information marked by stealth, surprise and non-transparency pervades the political and regulatory systems. For instance, would Gandhi have endorsed a political funding system where anonymous electoral bonds are issued to hide the names of donors among big businesses? Non-transparency is built into the legal-institutional arrangements. Would Gandhi have endorsed the use of violence on the people by the state apparatus to bulldoze a mining project by G.D. Birla? The prime minister needs to ponder this more deeply rather than just make a smart retort to gain a brownie point or two.

Finally, Gandhi advocated politics where truth is spoken without fear or favour. In a recently held private interaction between the prime minister and some industrialists, Modi asked the businessmen to frankly tell him what they felt about the business environment. No one spoke. The prime minister pointedly asked one prominent industrialist to speak up. He said he had many things to say, but he wouldn’t because of a sense of fear that pervades the environment. That was the truth, indeed. Mr Prime Minister, this is not how G.D. Birla responded to Gandhi.