The mission distanced itself from the prime minister's statements, saying it is a 'strictly apolitical body' and reiterated that monks of all faiths reside there. 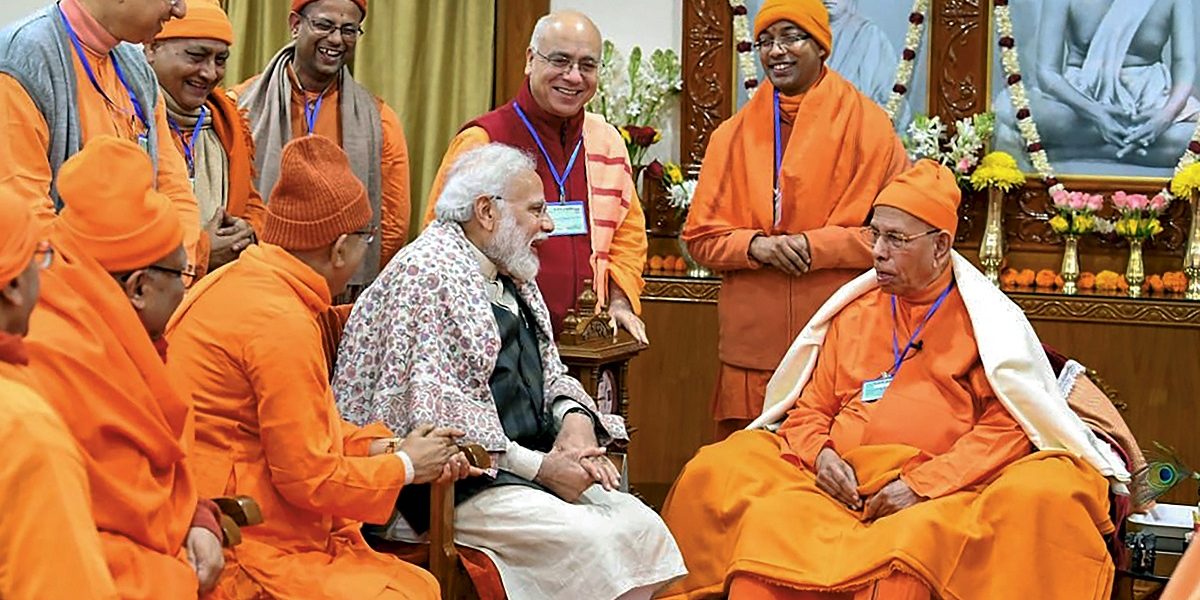 New Delhi: Members of the Ramakrishna Mission, founded by Swami Vivekananda, expressed displeasure at Prime Minister Narendra Modi for making “political statements” at the Belur Math, the mission’s headquarters – an accusation that was echoed by opposition parties.

At the Belur Math in Howrah district of West Bengal, Modi addressed people on the occasion of National Youth Day – hosted by the mission to celebrate the birth anniversary of Swami Vivekananda – and reiterated his government’s refusal to back down on the controversial Citizenship (Amendment) Act (CAA). According to reports, he accused those opposing the amended law of “playing political games” and “fuelling misconceptions among the youth”.

“What is there in this Act? Why was it needed? There are a lot of questions in the minds of the youth which have been fuelled by various people. Lot of youth have awareness. Yet, there are some who are victims of misconception, rumours. It is our responsibility to make them understand,” he said.

The CAA provides for easy passage to Indian citizenship for non-Muslim refugees from Pakistan, Afghanistan and Bangladesh. Ironically, several MPs quoted Vivekananda against Modi and Amit Shah’s draft law, noting that in his famous 1893 Chicago speech, the swami had said he was “proud to speak for a land that had always offered refuge to the persecuted from all nations and faiths.”

The “political” nature of Modi’s speech on Sunday upset some members of the mission, reported The Hindu. Gautam Roy, a mission member, said that it is “deeply hurtful to see controversial political messages being disseminated from the platform of RKM, which is an apolitical body.”

“Let me make two things clear. One, RKM has an elaborate and official process of consecration. Mr Modi has not been officially consecrated and two, he is not allowed to come and make statements which are political in nature. My observation is, RKM has been deeply politicised over the last years, with induction and promotion of senior spiritual leaders who were associated with the Rashtriya Swayamsevak Sangh [RSS] earlier. Mr Modi’s visit is part of that growing trend of RKM,” he was quoted as saying.

Reports said that some senior monks of the mission did not attend a scheduled private gathering of devotees on Sunday citing “preoccupations.” It was interpreted as “the monks’ expression of displeasure”.

Some disciples of the mission had sent a letter insisting that the PM’s visit to Belur Math be cancelled. “As a student of Ramakrishna Mission, I am requesting the Belur Math authority to cancel Narendra Modi’s visit,” the letter said, according to The Hindu. The letter also accused Modi of violence, noting that the place of Ramakrishna, Sarada and Swami Vivekananda “should not invite a person who created problem[s] for people.” 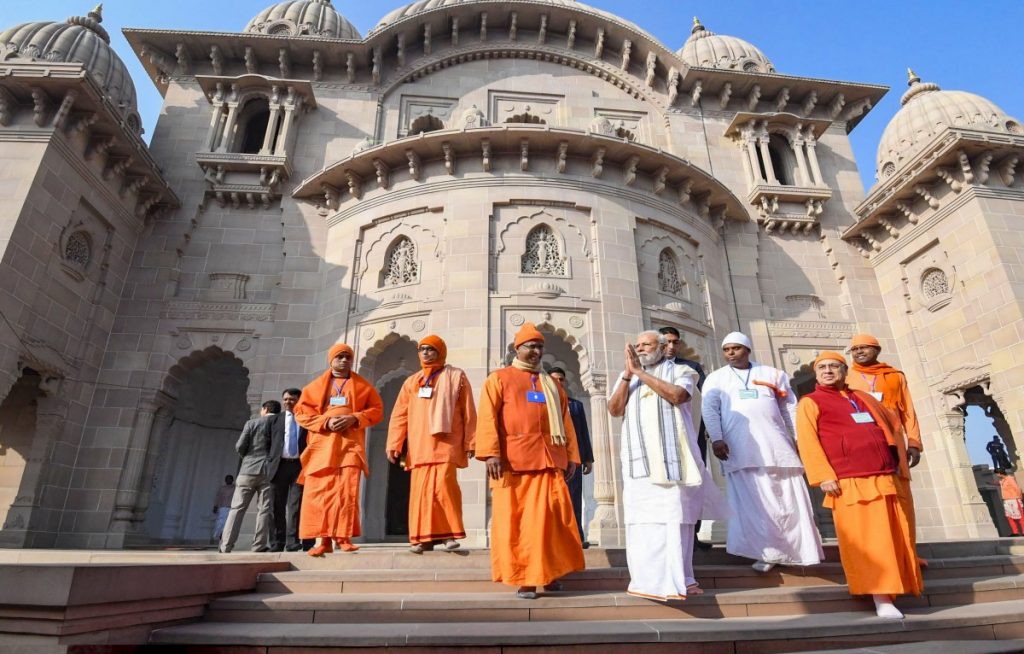 “Strictly apolitical body, do not respond to ‘ephemeral’ calls”

Meanwhile, the Ramakrishna Math and Mission distanced itself from the PM’s remarks on CAA, contending that it was a strictly apolitical body which did not respond to “ephemeral” calls.

Addressing a press meet, Swami Suvirananda, the mission’s general secretary, said, “The organisation will not comment on the prime minister’s speech on CAA. We are a strictly apolitical body. We have come here after leaving our homes to answer eternal calls. We do not respond to ephemeral calls.”

He said Modi was a guest and the onus was on him on what he had spoken at the Math.

“But when you have a guest… Atithi devo bhava is the Indian culture. And you must extend all kinds of courtesies, decencies to him. And if something you feel ought not to have been told, the onus lies on the person who tells it but not on the host – by no logic,” he added.

Asked whether Modi’s speech on the CAA was an attempt to ‘saffronise’ the mission, Swami Suvirananda said, “We are already saffron but that doesn’t mean that we are saffron in the sense that is being interpreted in politics today.”

“We are inclusive as an organisation, the only order in the world which has monks from Hindu sects and from even Islam… Islamic people from Iran and Iraq. Ours is the only organisation which has Christian monks, hundreds in numbers, Buddhist monks and we live like brothers, more brotherly than the brother born to same parents… What more inclusiveness do you want?” he said.

Opposition parties also criticised Modi for making a “political speech” at the Belur Math, saying he has forgotten to differentiate between a spiritual place and a rally out of desperation to implement the “divisive” new law.

Claiming that the countrywide protests against the CAA have cornered the Centre, the TMC, CPI(M) and the Congress said the prime minister should have “spared the holy land of Belur Math from his divisive politics”.

Leader of the Congress in Lok Sabha, Adhir Ranjan Chowdhury said, “The headquarters of Ramkrishna Mission-Belur Math is known across the world as a holy land. The prime minister should have refrained from making a political speech there. We condemn it.

“He should not have turned Belur Math into a venue of a political rally. There is some decorum in politics and public life, we need to maintain it.”

TMC secretary general Partha Chatterjee said the speech “proves the desperation” of the Centre and claimed it is on the back foot due to the anti-CAA protests across the country. “We condemn such cheap politics at a religious place like Belur Math. The people of India will never accept CAA,” he said.

CPI(M) politburo member Mohammed Salim was hopeful that the monks of the Ramakrishna Math and Mission would condemn PM Modi’s “political speech”.

Responding to the allegations made by the opposition parties, BJP national secretary Rahul Sinha said the CPI(M) and Congress should stop “lecturing on right and wrong”.