With BJP bent on highlighting a Hindu-Muslim divide and TMC keen to capitalise on Suvendu Adhikari's lack of perceived popularity, the constituency's people wish mostly for peace. 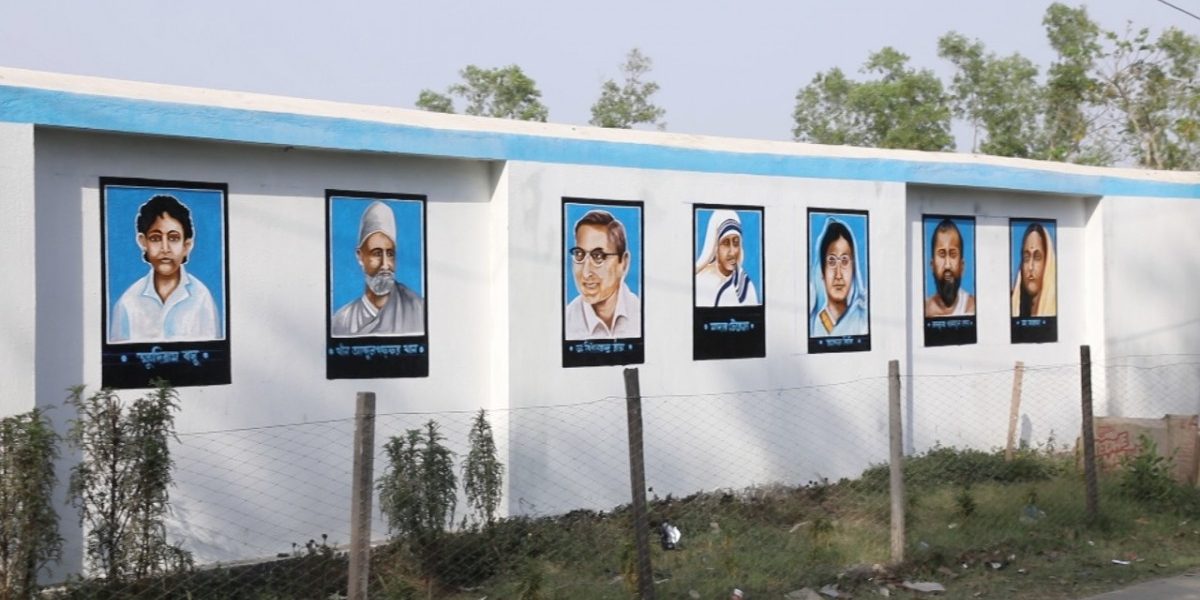 Paintings of icons on a wall in Nandigram. Photo: Devi Dutt

Nandigram: The site of the historical land struggle 14 years ago has now emerged the epicentre of the 2021 Bengal polls. The struggle then has now transformed into another kind of struggle.

Madhusudan Mondal, who runs a grocery shop in Bhekutia gram panchayat says, “Nandigram had fought back during the land takeover and Nandigram is fighting back now – for Bengal’s soul.”

Nandigram is located in East Medinipur district of West Bengal about 150 kilometres from Kolkata.

In the days leading up to the election, journalists both from Kolkata and outside the state have been visiting the area daily. This is naturally because of the contest at Nandigram – chief minister Mamata Banerjee has relinquished her old constituency, Bhowanipore, to fight against her former trusted lieutenant Suvendu Adhikari, who switched over to the Bharatiya Janata Party three months ago.

The pitched campaigns and attention has left common people irritated.

Forty seven-year-old Sushanto Bera, who has a shop at Nandigram market, said, “Far too many people from the press have been coming here and asking questions. Politicians will contest and go, but we will have to live here. All these cameras and mics don’t suit us, we want peace.”

Mamata Banerjee’s posters are seen at every turn of the constituency. The message is the same, “Bengal wants its own daughter.” Saffron flags, too, flutter from everywhere. BJP’s posters have a similar message, “Nandigram-Medinipur wants a son of its own soil, not an outsider.”

Addressing party workers in Nandigram on March 9, Banerjee rebuffed the “outsider” tag and said, “I am from Bengal, and yet I have been called an ‘outsider’ here. People from Delhi and Gujarat are coming here but they are not considered outsiders.”

Banerjee has rented a house in Nandigram. She has been vocal with plans to build a permanent residence in the constituency so that she can visit more frequently.

Since Suvendu Adhikari joined BJP, he has adopted a line of clear communal polarisation. This became sharper since Banerjee announced that she will contest from Nandigram.

Addressing a public meeting in Khejuri’s Henria on January 19, a day after Banerjee’s meeting at Nandigram’s Tekhali, Adhikari said, “People have seen who attended Mamata Banerjee’s meeting in Nandigram. I consider that meeting as a party meeting by Hyderabad’s Asaduddin Owaisi…With whose support will you contest from Nandigram? Are you fighting with the hope of 62,000 (a hint at the Muslim electorate) votes? Know that the lotus will win because of 2.13 lakh (a hint at the larger Hindu electorate) votes. Who are the 2.13 lakh, those who chant ‘Jai Shri Ram’?”

A day before, Banerjee submitted her nomination papers for the Nandigram assembly constituency and visited a large number of temples and mazars within the constituency.

While speaking to party workers, she said, “I am a daughter of a Hindu family. Don’t try to play the Hindu card with me. First, you clarify if you are a good Hindu. Hinduism means loving people. Swami Vivekananda taught us Hinduism.”

Next day, Adhikari while inaugurating his election office near Nandigram bus stand said, “Nowadays she (Banerjee) has stopped saying ‘inshallah’ and ‘khuda haafiz’ [Urdu phrases used by Muslims] as the elections are approaching. I respect all religions. Now she is talking about Hindu dharma…Your surname is Banerjee, then why do you have to tell people you are Hindu? If she wins, people won’t be able to put a tilak on their forehead, wear tulsi beads around their necks or even a dhoti. Awake my mothers, awake.” 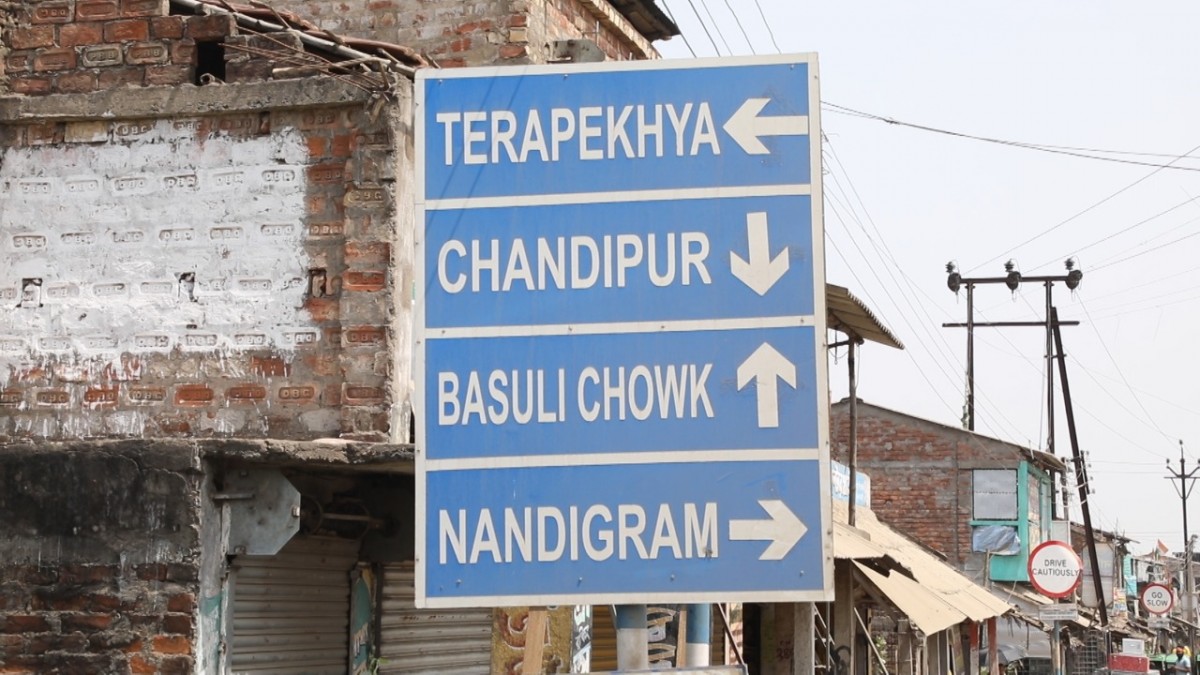 The latest was on March 20, while speaking at a public rally in Nandigram. Adhikari said, “Do you want a son of Medinipur soil or do you want to see Nandigram through Sheikh Sufian’s eyes? They have created a small Pakistan in various gram panchayats. If Pakistan wins a cricket match, they blast crackers, distribute sweets and eat meat. Do you want to hand over Nandigram to them, think about it.”

Sheikh Sufian is a prominent TMC leader of the region and a key face of the Nandigram anti-acquisition movement in 2006-07.

Pintu Maity, a daily wage labourer from Kalicharapur gram panchayat, says, “In all these years, whenever Suvendu used to come to Nandigram, he used to eat at Sufian’s house. And today, he called him a Pakistani. Today, he is saying TMC supporters are jihadis.”

Another resident, who requested anonymity, said such polarisation was new to Nandigram.

“Ours is a Hindu majority village, but our school headmaster is Muslim. My daughter scored 90% in her 10th exam after studying under the headmaster. So what should I do now, stop sending my child to school because the headmaster is a Muslim? Hindu-Muslim politics only creates divides, and nothing else.”

One Paltu Ghorai says it is strange to hear a leader like Adhikari suddenly say things that attempt to divide Hindus and Muslims.

The Wire has learned that on March 10, miscreants threw a piece of meat at the famous Jankitnath temple, about 300 metres from Nandigram police station. What could have been an attempt to create tension was subdued by locals. 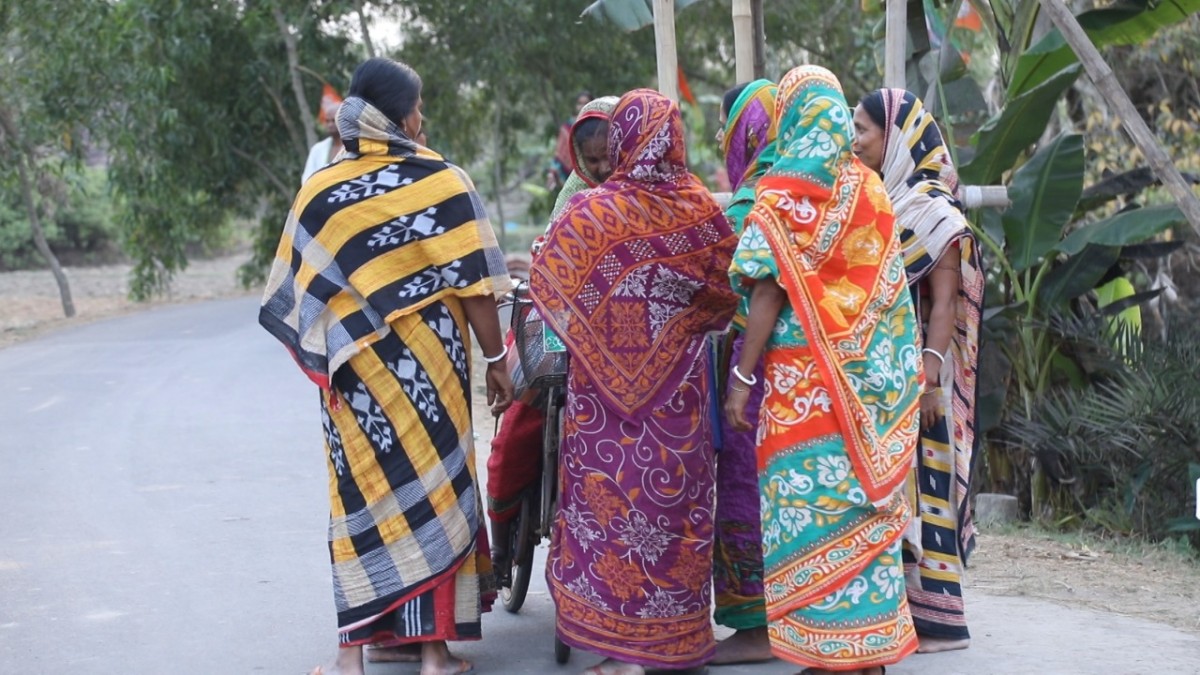 “He is trying to create tension in Nandigram to polarise the area further in order to consolidate Hindu votes in favour of BJP…Now, he is calling TMC supporters Pakistanis,” says Swadesh Das, TMC block president, Nandigram-1 block. Das says he believes that people will reject the new Suvendu Adhikari.

The Adhikari family is the most influential family of the unified Medinipur district, especially in East Medinipur. Suvendu Adhikari’s father Sisir Adhikari is the MP from Contai, his younger brother Dibyendu is the MP from Tamluk, and another sibling, Soumyendu was the chairman of the Contai municipality. The Adhikaris chair various committees and workers’ unions.

Nothing in this region apparently gets done without the nod of the Adhikari family. “From a panchayat pradhan to the MP…everything is decided by Suvendu. He handpicked his men for the party’s organisational posts and had full control over two districts,” said a local TMC leader.

Soon after Suvendu Adhikari joined BJP, TMC took away nearly all the posts the Adhikari family had. Suvendu, Soumyendu and Sisir are now all with the BJP. Dibyendu is likely to join BJP on March 24.

The battle against the Adhikaris has united all other Trinamool factions in the district.

“TMC workers here never liked the Adhikaris but we couldn’t say anything then because the family had absolute control. Now everyone knows Suvendu is a traitor. All lobbies of the party today are united and we have just one mission, to defeat the traitor and teach him a lesson,” said the leader, asking to remain anonymous.

Nandigram assembly constituency is spread across two blocks, Nandigram 1 and Nandigram 2. In Nandigram 1 block, 34-35% of the population is Muslim, whereas the figure is at around 10-12% in Nandigram 2 block. Overall, a quarter of Nandigram’s voters are Muslims. 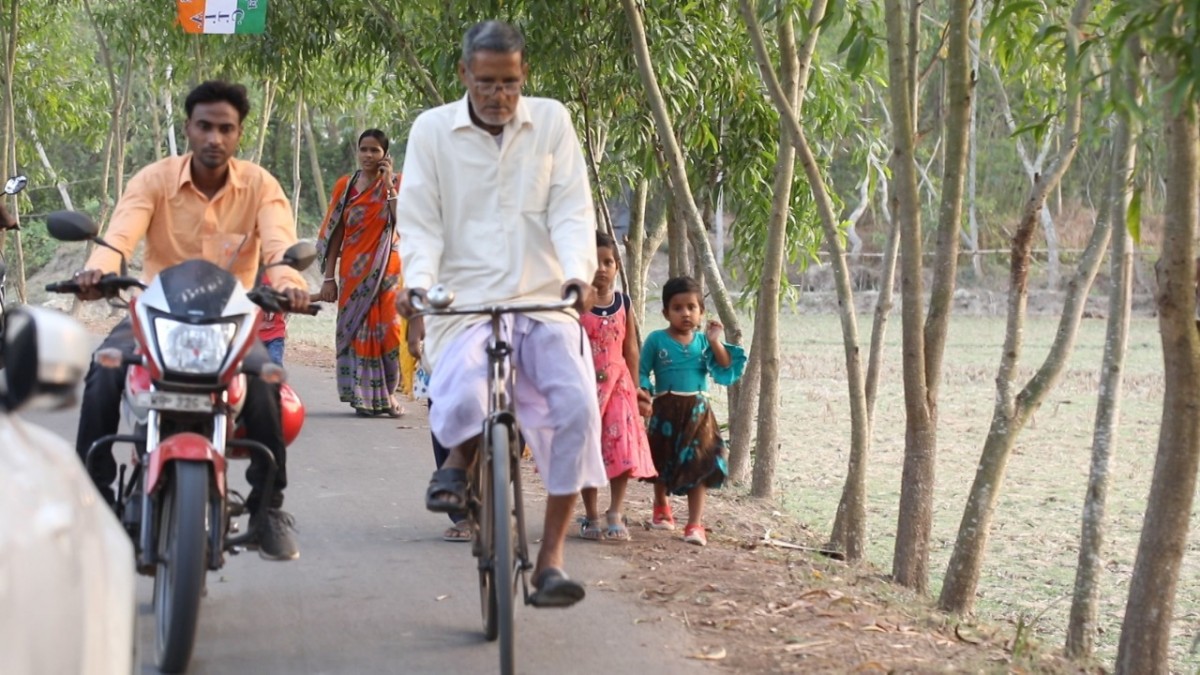 Rumours had had it that the Left-Congress-Indian Secular Front (ISF) alliance would be fielding the popular Muslim cleric Abbas Siddique’s brother, Naushad, from Nandigram.

However, the Sanyukt Morcha nominated Minakshi Mukherjee, a popular face of the CPI(M)’s youth wing, Democratic Youth Federation of India (DFYI). Locals feel that this gives TMC an edge.

A school teacher and a resident of Kendamari Jalpai gram panchayat, who requested anonymity, said, “There is fear among Muslims that if BJP comes to power in Bengal, their life will be hell. So in this election, I don’t see Muslim votes getting divided.”

In at least 8 of the 17 gram panchayats in the constituency, this reporter noticed a visible lack of satisfaction with Suvendu.

Nirmal Jana, 49, engaged in pisciculture and a resident of Sonachura gram panchayat said, “What is Suvendu without Didi? Whatever development happened is because of her. After enjoying all the power and position, he ditched Didi. And today, he is doing Hindu-Muslim politics here. Are we fools that we will support him?”

A senior Left leader of the region, who didn’t want to be named, told The Wire, “His popularity is not because people love him, it is because his men scare, threaten and torture people. In the 2019 Lok Sabha election, it is the anti-Suvendu votes that went to BJP and because of that we have seen a saffron surge in Nandigram. Most people who voted for BJP in 2019 will not vote this time because of Suvendu’s induction into the party.” 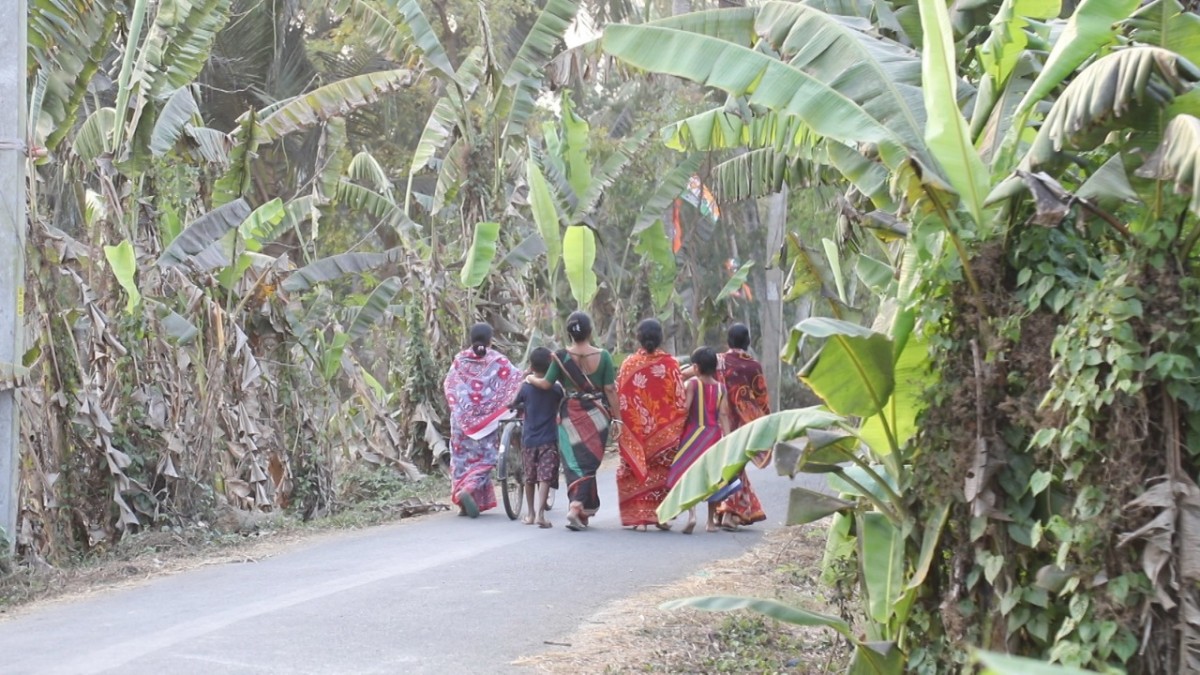 Women walk down a road in Nandigram. Photo: Devi Dutt

Uttam Doloi of Reyepara echoed the Left leader’s view. “I voted for BJP in 2019 because Suvendu and his men were terrorising the area. He is a goon. BJP has made a grave mistake by taking him in.”

But BJP sympathiser Tarun Nanda, who runs a grocery shop near the BJP party office in Nandigram market said, “We know Suvendu, so we will vote for him.” Nanda said that even though the Mamata Banerjee government has been successful in welfare work, her tendency to “appease Muslims” is what will lead to her defeat.

Subrata Chiti, a migrant worker returned from Pune during lockdown and is a resident of Bhutar More also said that Suvendu has been capitalising on his clout in the region since 2015.

The stakes are high. If Banerjee suffers in Nandigram, TMC workers across the state will suffer a demoralising blow. Similarly, a loss for Adhikari in his home turf will damage his political image and put Bengal BJP on the back foot as the party is heavily dependent on him.

Nandigram goes to polls on April 1.